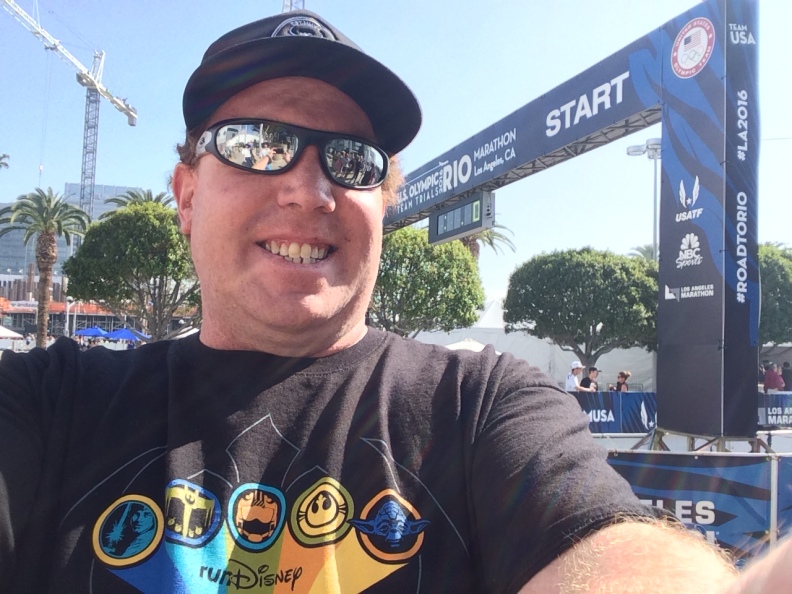 This past Saturday, the city of Los Angeles got to host the trials for the United States Olympic Marathon Team! Ever since they announced that the trials would be on my home turf, I’ve been looking forward to being a spectator.

This is an overview of the course. As you can see, it’s not your typical marathon course. Back in 2012, when the marathon trials were in Houston, they experimented with a course that had several loops. It worked out so well, that they kept that concept in place for this Olympics trials. Personally, I think this course was designed for the fans and not for runners.

As I thought about how I would spectate, I came up with a plan. I’d take the train into USC where I’d watch the first couple laps. Then, I’d walk over to the Los Angeles Memorial Coliseum for lap 3. Then, take the train back to the Los Angeles Convention Center for the finish. After all, there was a We Run Social Meet Up happening at 1pm at the Convention Center. Sounded like a great plan. Right?

I had no idea how many people would show up for the race. So, I made sure to get to the campus of USC early. I thought a spot right by Tommy Trojan would be fantastic for pictures. Plus, it was a straight shot off campus to get me to the LA Coliseum. When I arrived, there were lots of people running along the course. I thought..what a cool idea. I wish I’d thought of that earlier. I could have done the same. Oh well.

As I waited, I saw Dr. Arthur C. Bartner, director of the world famous USC Trojan Marching Band. He was scouting an area for a portion of the band to perform. They picked an area right by me! When I was in high school, I played trumpet in a high school all star marching band for a Dodgers game under Dr. Bartener’s direction. So, my morning was already off to a great start to see him again! 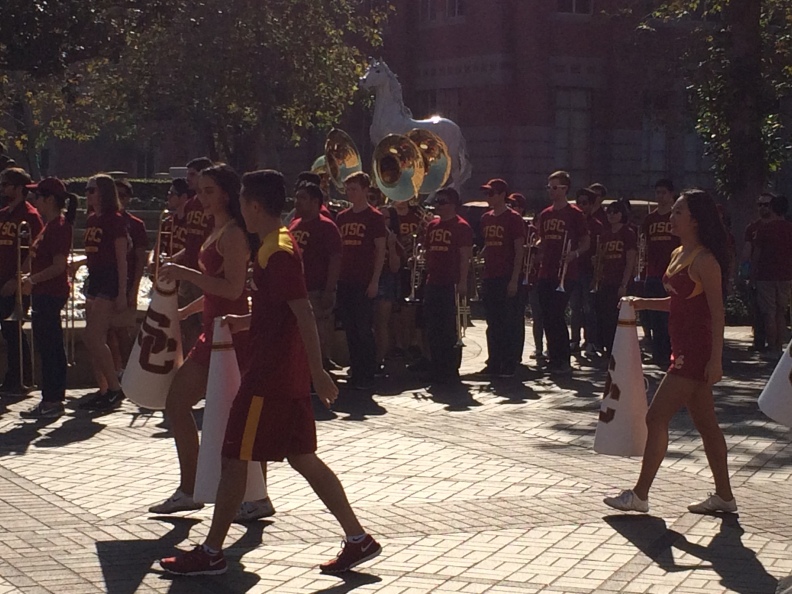 Eventually, the band showed up and got set up.

Not only was he band out, but some of the USC cheerleaders and color guard as well! It was nice to have some music by the band while we waited for the first runners to arrive!

I had downloaded the NBC Sports Live Extra app to be able to watch the trials on my phone. I had fun chatting with the others who were out to cheer on the runners as well. A few of us watched as the men made their way towards us.

Before I knew it, the media truck and police were driving past us to clear the way for the runners.

As you can see, Meb was out among the leaders of the pack.

It was pretty cool to be watching the elites of the entire country running past me! Because they are all so fast, it looked like they were out for a stroll. How easy it would be to think…I could do what they are doing. Of course, I could…however, not as fast.

After the men passed through, there was about a 15 minute gap before the top women marathoners arrived. My lack of knowledge about who the best marathoners the United States has to offer made spectating interesting. I only knew a handful of them.

The women were a little more spread out than the men. So, the gap between the back of the women runners and the front of the men wasn’t too long. Once the men passed through, I looked on Facebook and noticed that a running friend of mine, Juliana, was also watching the race on campus. I think it was after the men passed through that she made her way over to me so we could watch the rest of the race.

By the time the women got back to us, there was a sizable gap between the two leaders and the rest of the bunch. The women’s race opened up much quicker than the men’s. My plan of leaving after the women came through the second time changed during their second time around. Why?

Before the women had finished passing by, Galen Rupp and Meb had taken to the lead on lap 3.

I got my favorite pic of the day here. Look! Mem is in almost the exact same pose as Tommy Trojan. For those of you who don’t know, Meb is a graduate of UCLA…the bitter rival to USC. So, here is Meb, decked out in his UCLA Bruin blue and gold running by USC’s Tommy Trojan.

Anyways, with the men passing by, I could finally see the difference in running speed. Those top guys were passing by the straggler women like they were standing still. It was kind of a crazy sight for this back of the packer. Why? Because the back of the pack women in this race were still way faster than I am. They would be running with the elite runners in the races I have run in. So strange.

By lap 3 for the women, nothing had changed at the front. We still had Amy Cragg and Shalane Flannigan leading the way. By this point, I had decided to just stay until the front of the women had passed by in lap 4. Even though it might have been cool to get pictures from a different spot on the route, I was having fun where I was at. So, it was okay.

Later, I’d find out that Desiree Linden would overtake Flanningan to finish second. She looked strong in third place.

After the women passed for the fourth time, Juliana and I got a quick picture with Tommy Trojan in the background and I headed off to the train.

I made it back in time to see Kara Goucher finish up her race in 4th place. The crowd by Staples Center was awesome! There was so much excitement!

With the Olympic Marathon team set, I walked up Figueroa Street to get to the other side. As you might imagine, there was no crossing the street. So, I had to make my way up to the turn around point on the street. On the way, I got to see the Mile 26 marker! A happy sight for any marathon runner!

Here’s the last turn to head towards the finish line.

One thing I found interesting is that the Start line was not the finish line. The finish line was just a little further up the street. Here are the video recaps of the race….

First for the men….

Congrats to Meb on qualifying for his 4th US Olmypic team and becoming the oldest person to qualify to run the marathon at the olympics! Honestly, watching all these amazing athletes in person is awe-inspiring. I will probably never again get to watch an Olympic trials for the marathon. So, this once in a lifetime experience was something that I’ll never forget.

2 Replies to “Spectating at the 2016 US Olympic Marathon Trials”