Sorry about taking a week away from the blog. Life outside of running continues and sometimes gets in the way. Part of what kept me from blogging is what also killed my first two weeks of training for the Rock n Roll San Diego Half Marathon. Let’s just say my training isn’t off to a good start. 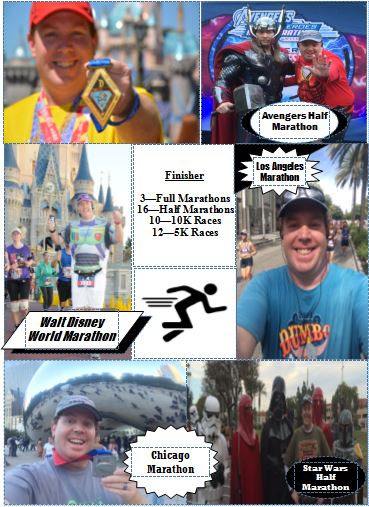 One thing we finished two weekends ago was an update to our adoption portfolio. I’m particularly happy with this page. We have 21 pages (20 regular pages and a cover page) in our portfolio. We made changes to all but 3 of them. The emotions of getting everything updated took a lot out of me. We also did what we needed to go in order to be listed on the “Families Waiting” page of our adoption agency! 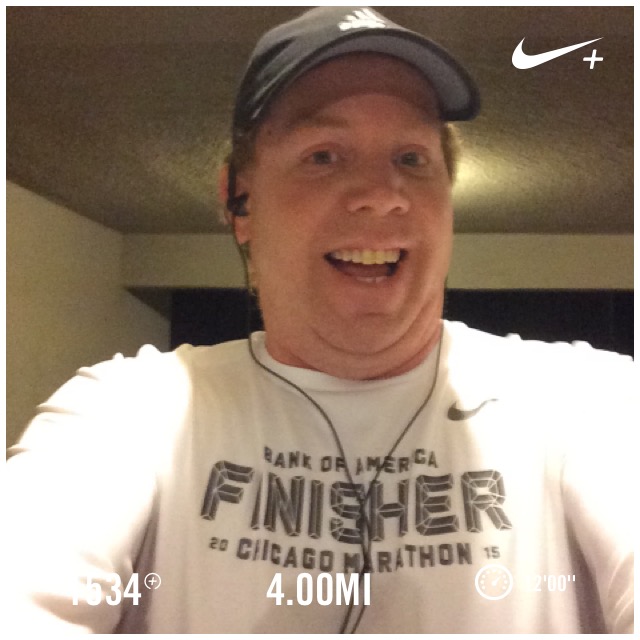 After being sick two Mondays ago, I finally got my first training run in that Wednesday. I needed Tuesday, that week as a recovery. So, I thought I’d run Wednesday and Thursday and still get all my runs in. Not so. This run was my first at running 4 miles for the mid-week in a while. I forgot how much I love this route! I decided to run a 30/90 interval for this run for two reasons….1) it was my first time back at the 4 mile distance and 2) since I had been sick, I didn’t want to push too hard. The 30/90 worked really well. I even finished just over 48 minutes. 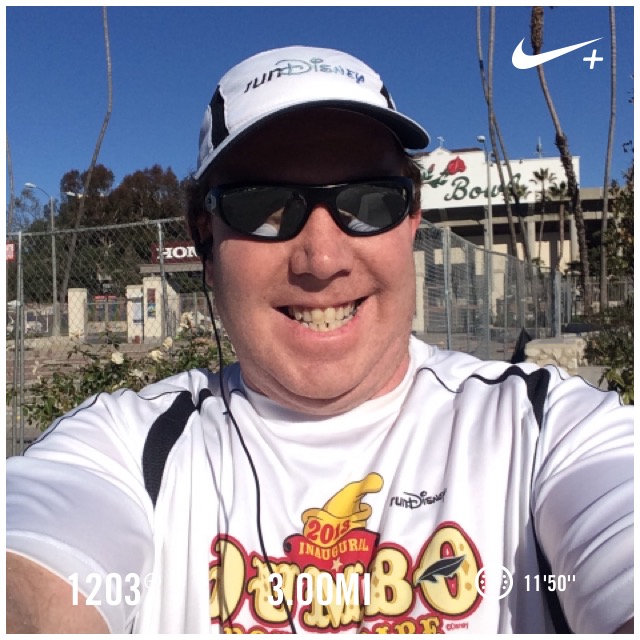 I was exhausted after work two Thursday’s ago, so my next run wasn’t until Saturday morning. I had 3 miles on the calendar. It’s been a while since I’ve run so little on the weekend. Since this would be my shortest weekend run of this cycle, it seemed like it would be totally lame if I missed it. I was not feeling great when I woke up and it continued all the way until I started my warm-up at the Rose Bowl. I decided to start with a run 30 walk, 90 seconds for mile 1 and go from there. If I felt alright, I’d switch to run 30, walk 60 seconds. The first couple run intervals felt good. I was a little slow, but felt good. By the end of mile 1, I was feeling so much better. So, I made the switch. I finished mile 1 in just over 12 minutes. So, I decided to see how much time I could make up in mile 2. I pulled myself to under a 12 minute per mile pace by the end of mile 2! That only encouraged me to continue with these intervals. By the end of mile 3, I had pulled myself even further under that 12 minute per mile average! It was a great run!

After running, I did a lot of work on the future baby room (assuming we get chosen). I assembled the crib, loaded up the sports memorabilia we had in display cases for storage, and took down the display cases. It’s kind of crazy how much it took out of me to get all this done. Plus, the emotions of seeing the empty crib. All of it lead to skipping my Sunday gym workout and a week with no workouts to report. This adoption stuff can really weigh me down at times. 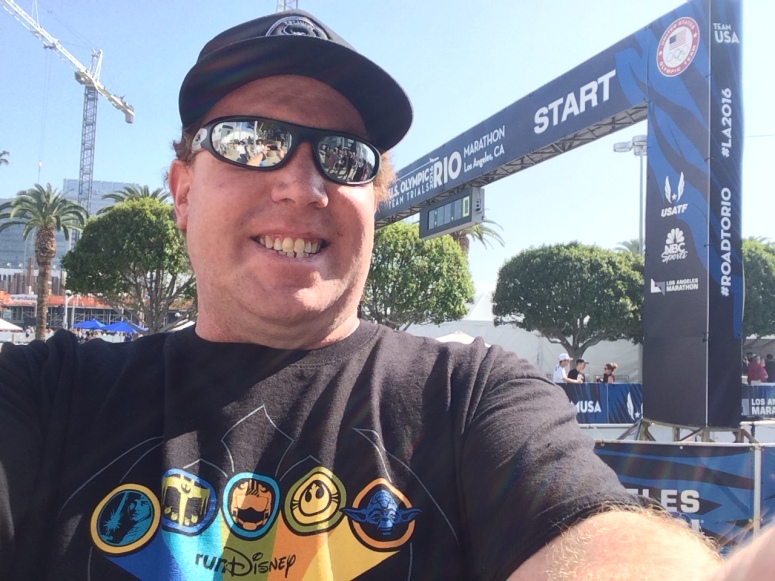 This past weekend was absolutely inspirational! It all started off with watching the US Olympic Marathon trials which were held in Los Angeles. 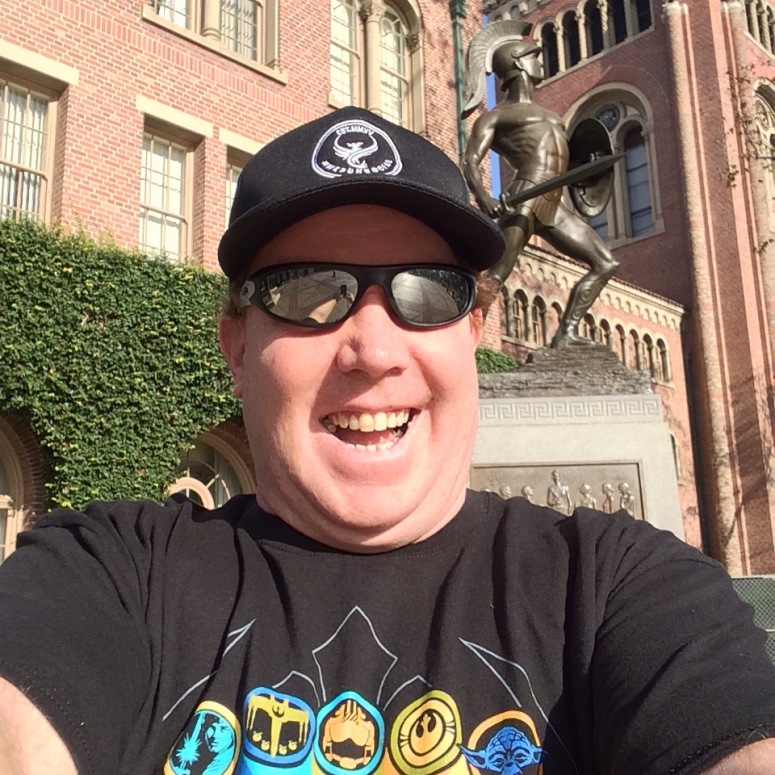 I staked out a spot near Tommy Trojan at the USC Campus. I’ll talk about the trials more in a later post. But, this turned out to be a great spot for me… 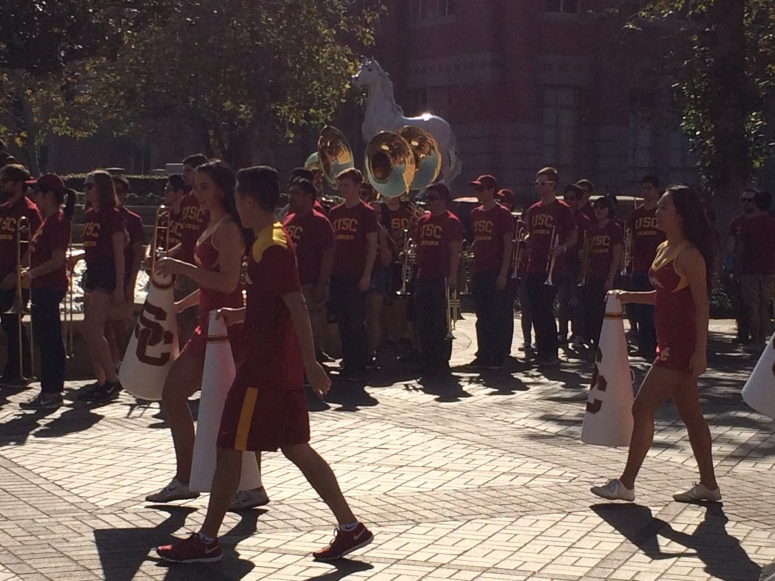 The USC Trojan Marching Band (or at least a small version of it) was out right by where I watched the race! 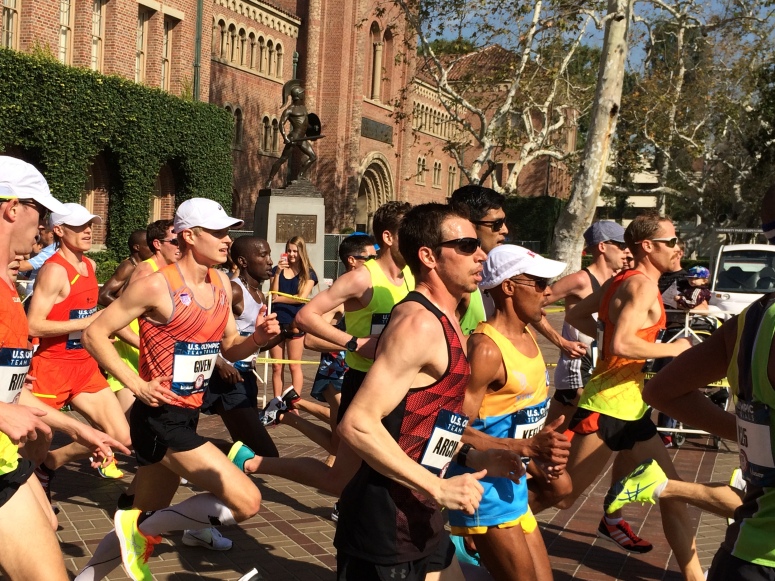 The men came through first… 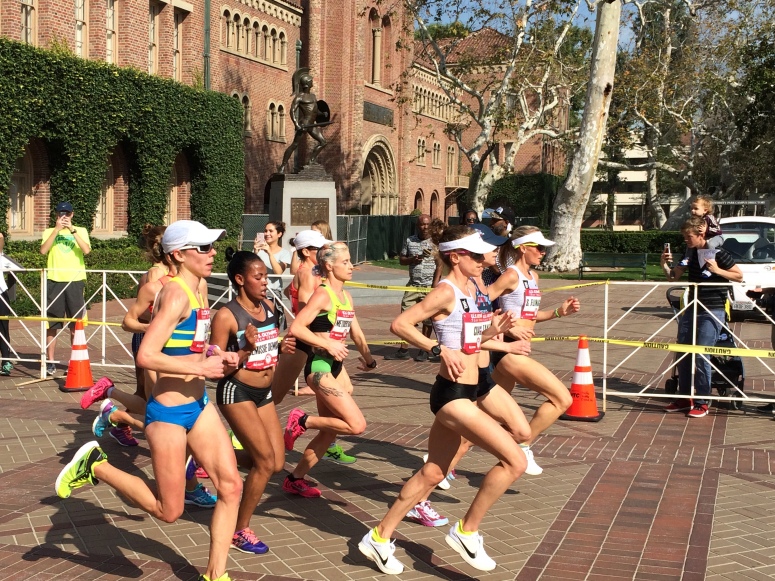 Then the ladies…the course was a 2.2 mile loop up near the Staples Center. Then, they had a 4 more laps that took them down to USC and the Los Angeles Memorial Coliseum. So, we’d get to see the athletes pass by 4 times. This route was probably much better for fans than it was for the runners. 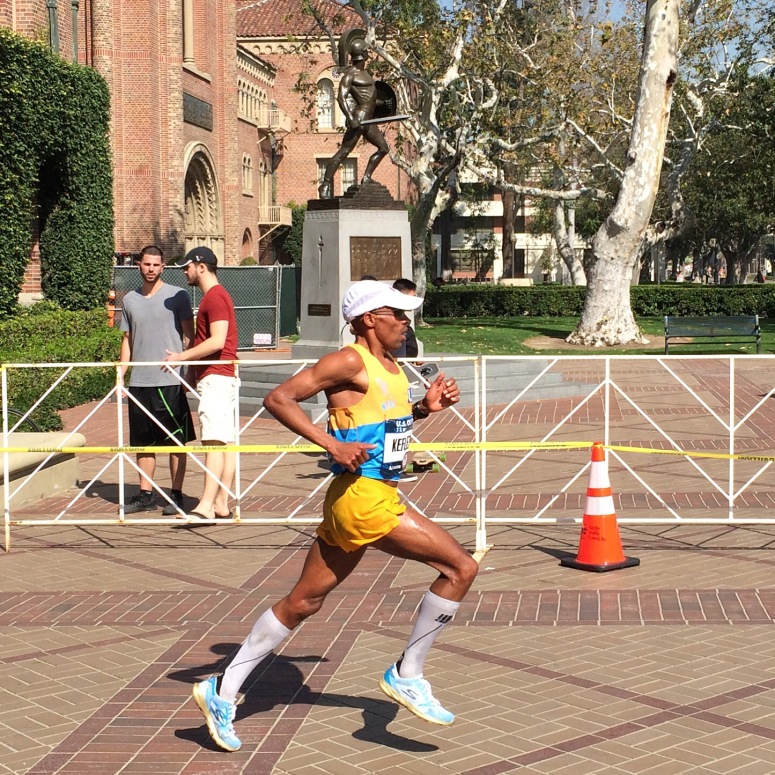 It was kind of cool to see these amazing runners up close. Check out Meb here! He’s almost exactly posed like Tommy Trojan! 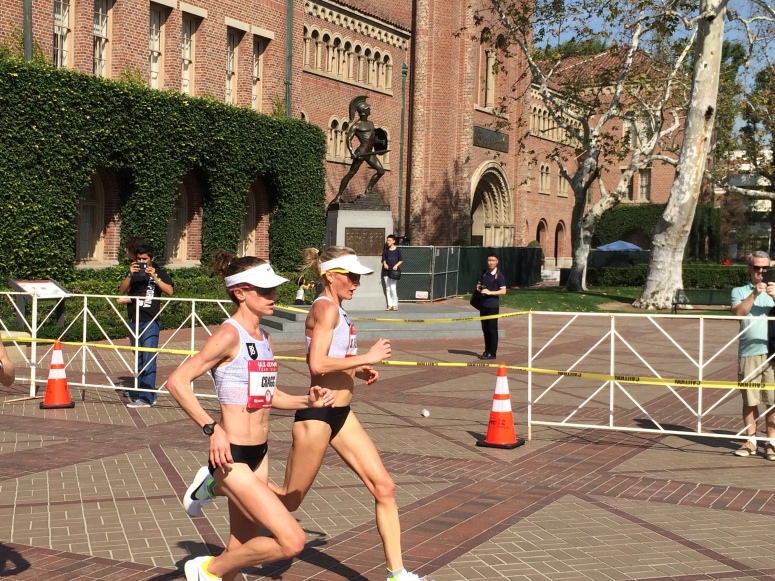 Here are the top 2 women finishers! 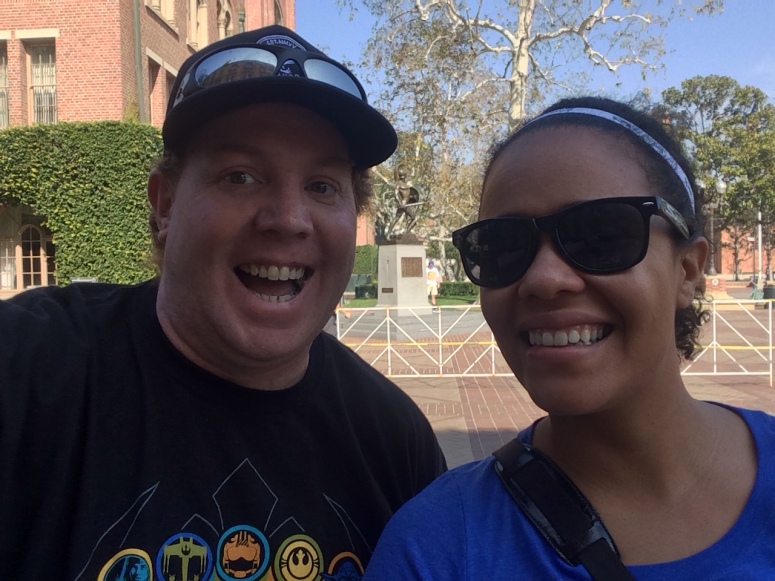 Another fun thing about this event was that I got to watch with one of my running friends, Juliana! 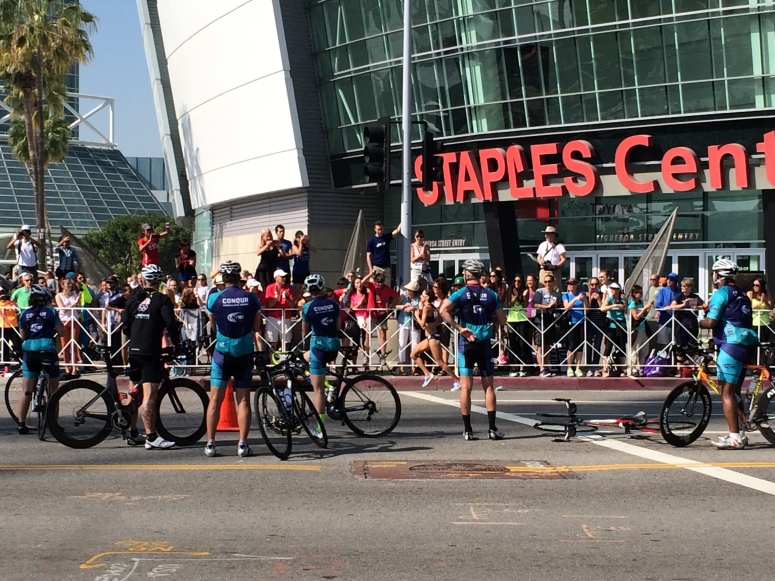 After the top ladies had passed by the last time, I took the train back to the Staples Center and Los Angeles Convention Center in time to see the 4th place finisher and 5th place finisher pass.

After the trials, it was off to the We Run Social Meet Up. These meet ups are always so much fun! It’s great to re-connect with some runners and get to meet others for the first time. 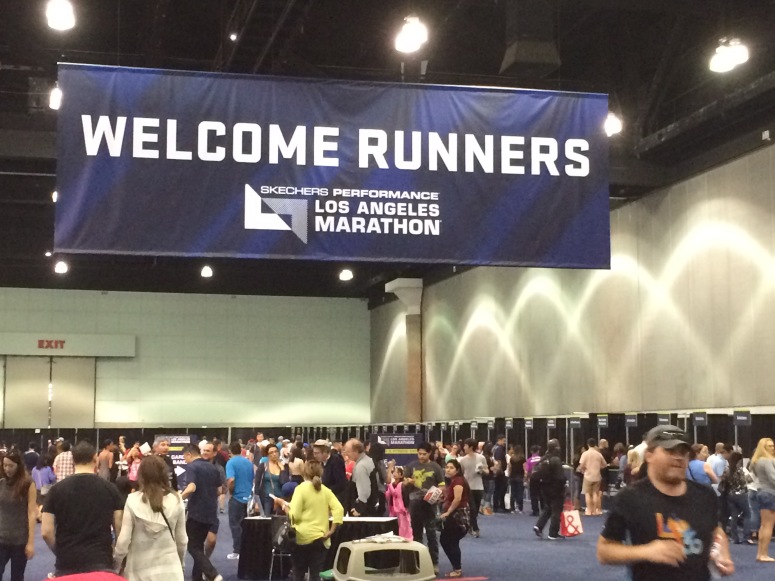 After lunch, I headed to the Expo for the Los Angeles Marathon. 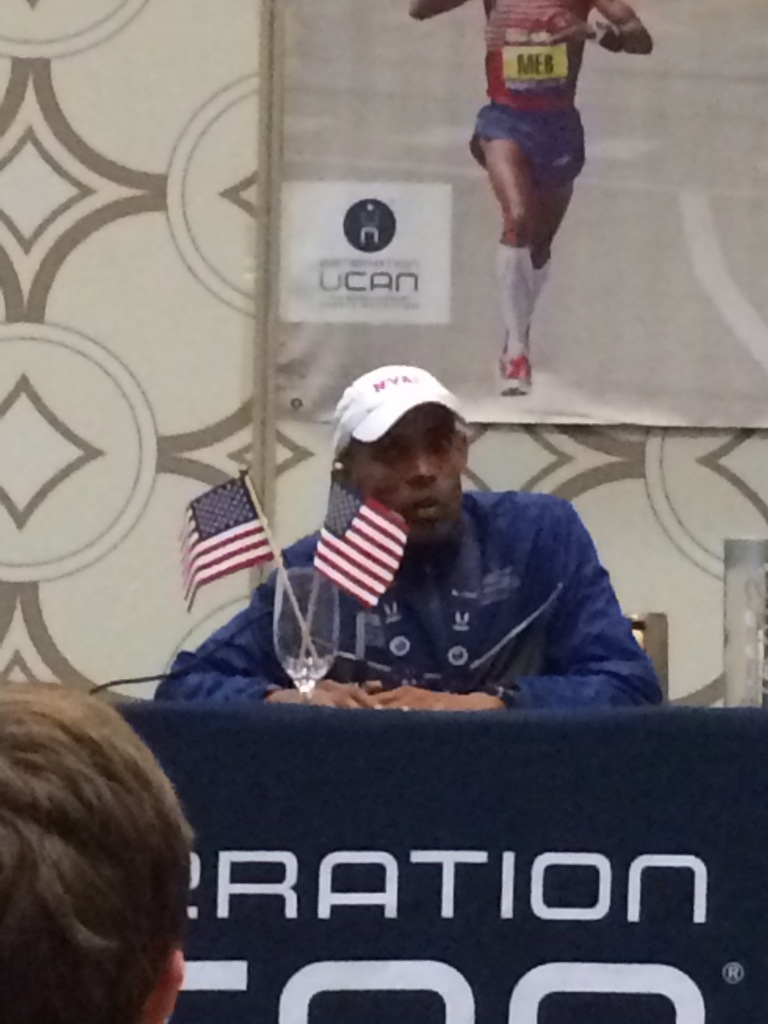 After hanging out at the Expo, I went to an event hosted by Generation U Can. I got a sample of some of their products. We got to hear from Meb and several others who use these products. I’m telling you, if you ever get the chance to see Meb speak, make every effort to hear him. He’s so inspirational! Not that the others weren’t. But, Meb has overcome so much to be where he is at in the running community. I want to do a post about Generation U Can and the event I went to later. But, for now, let’s just say I was inspired. 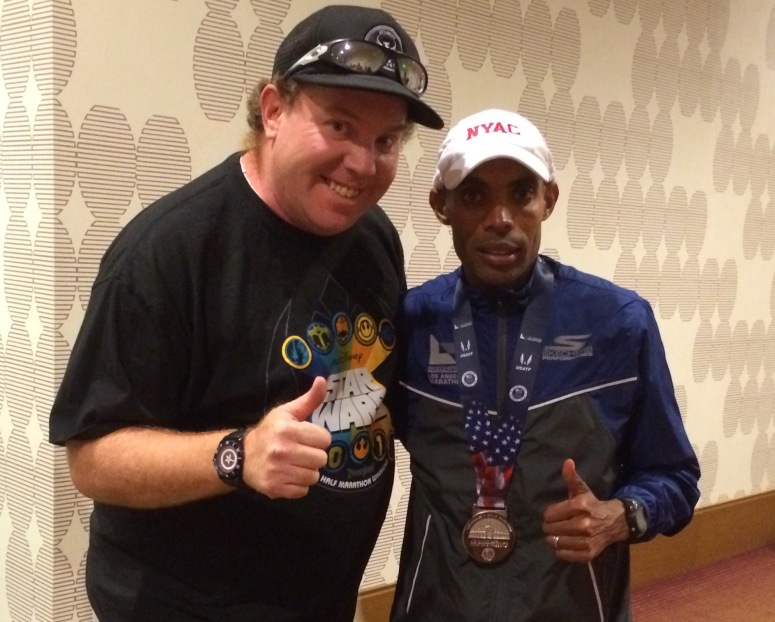 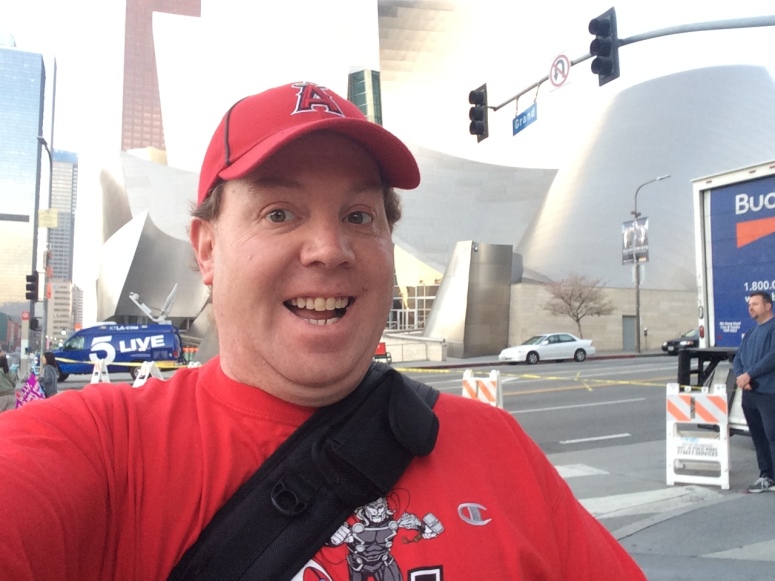 Sunday, I headed out to watch the 2016 Los Angeles Marathon. My first spot to spectate was by the Walt Disney Concert Hall in mile 5. 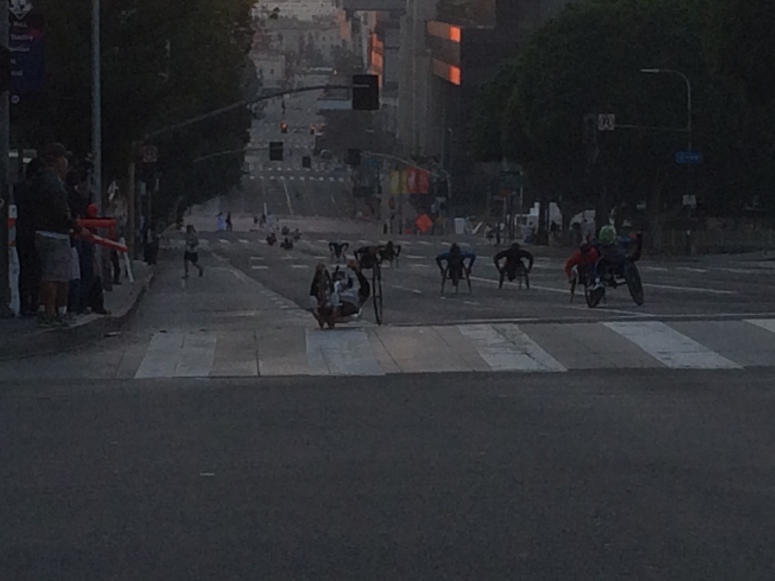 I was at the top of one of the big hills in the race. I wanted to position myself in a place where I could get pictures with the Walt Disney Concert Hall in the background. However, there was a water/Gatorade station right around the corner (where I wanted to be). So, the top of the hill it was. 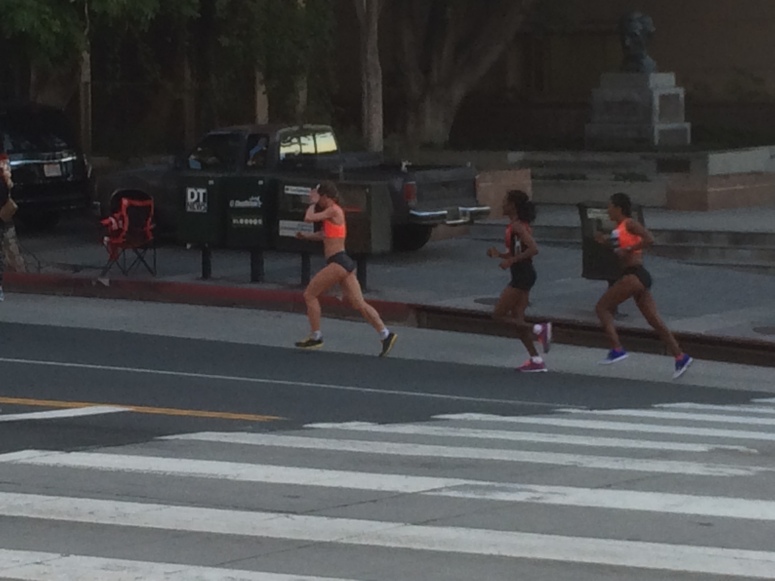 I got to see the elite women go by…. 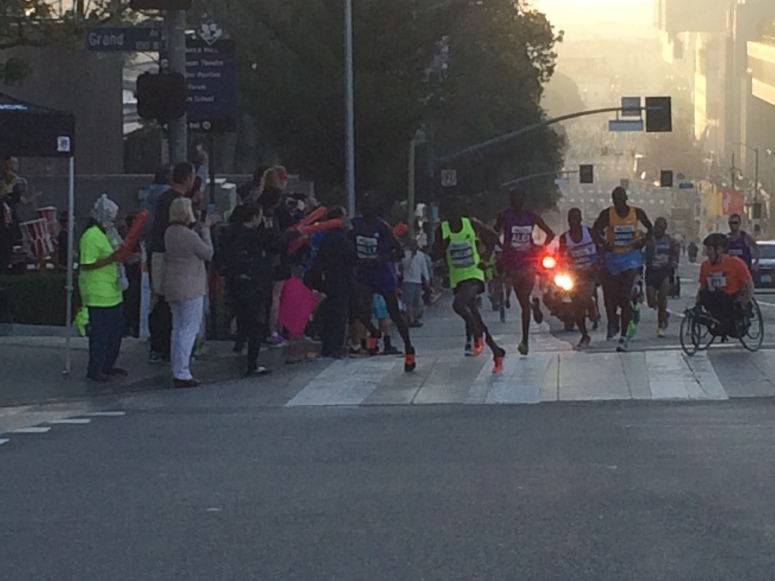 and the elite men. However, I totally missed the first few of my friends who were running. 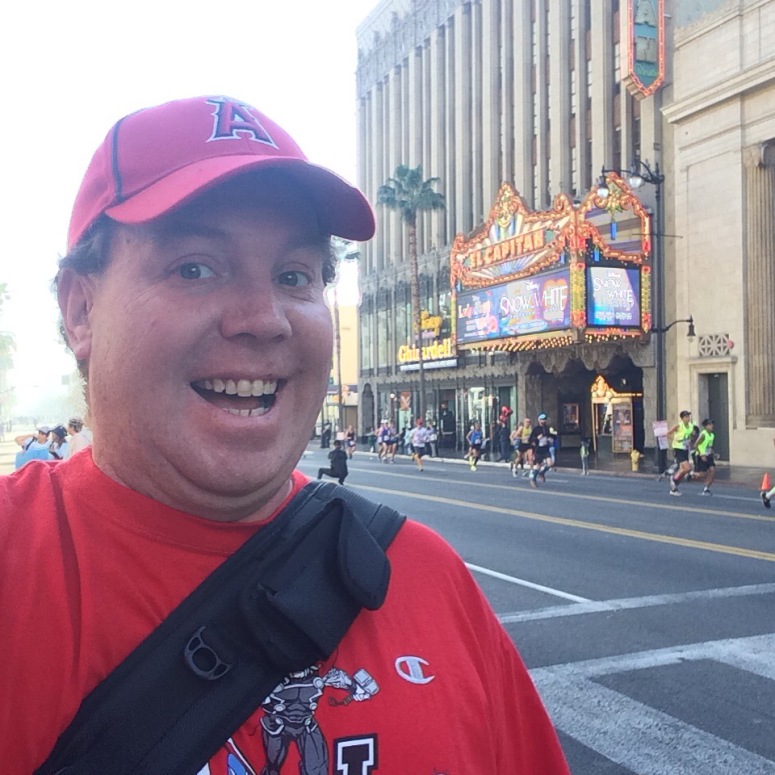 So, I headed back to the train station and made my way to viewing spot number 2…the El Capitan Theatre. 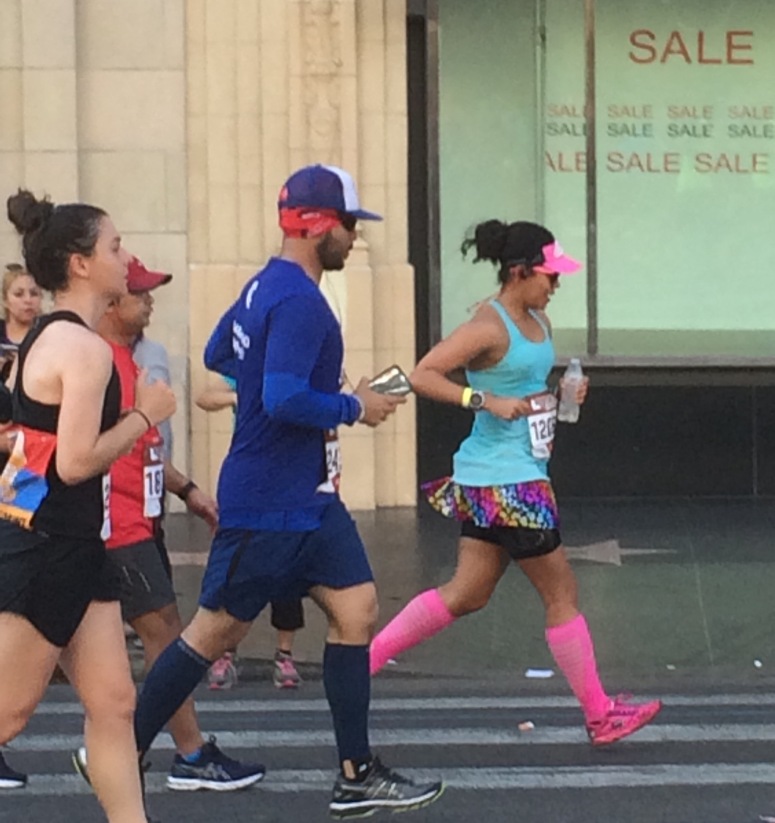 After missing a few friends, I did get to see Juliana… 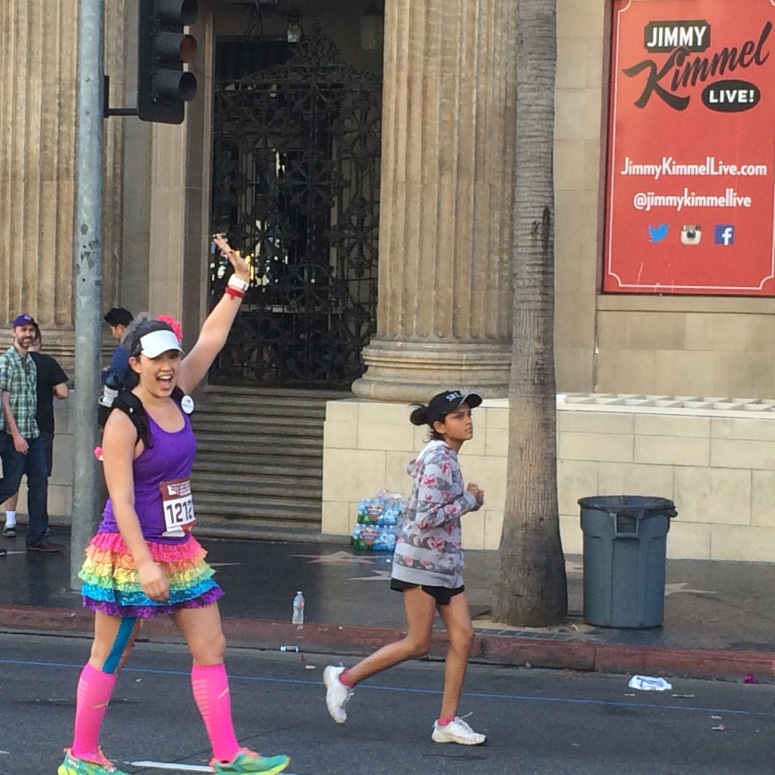 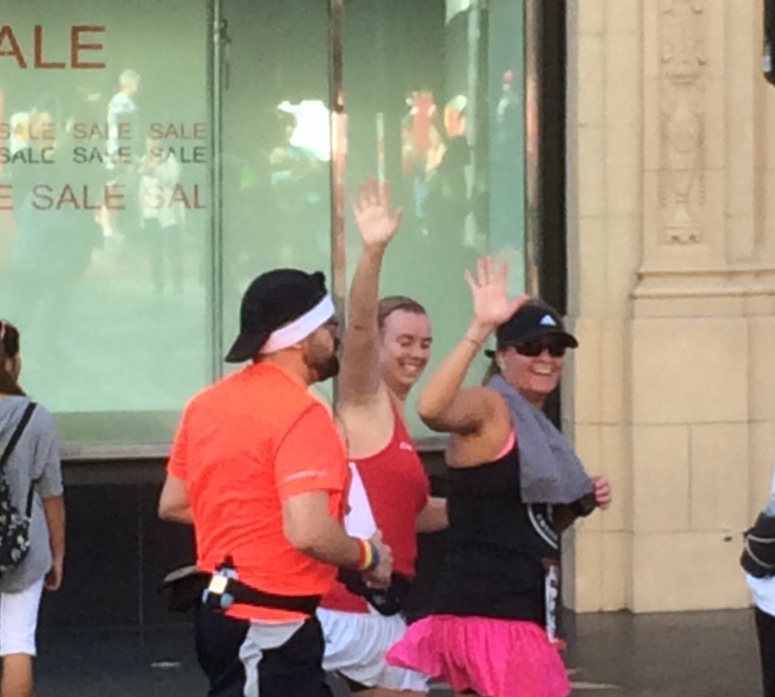 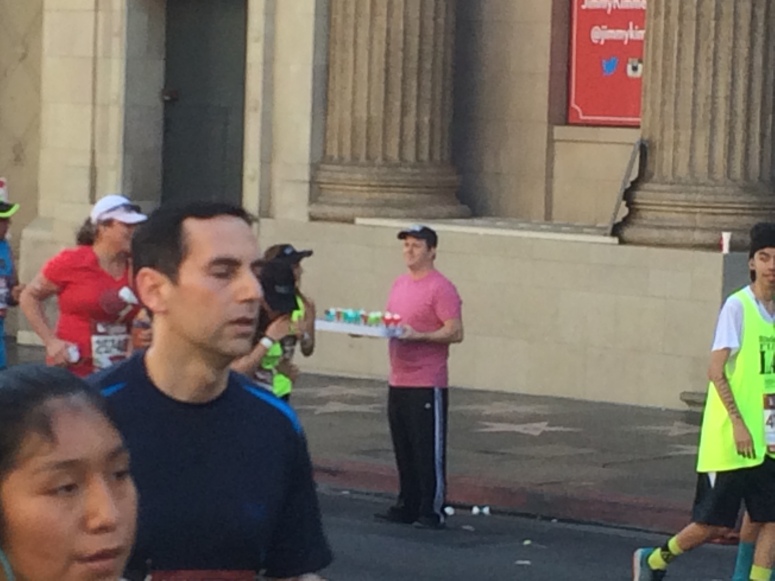 Also, I think this was Jimmy Kimmel handing out snow cones to the runners. 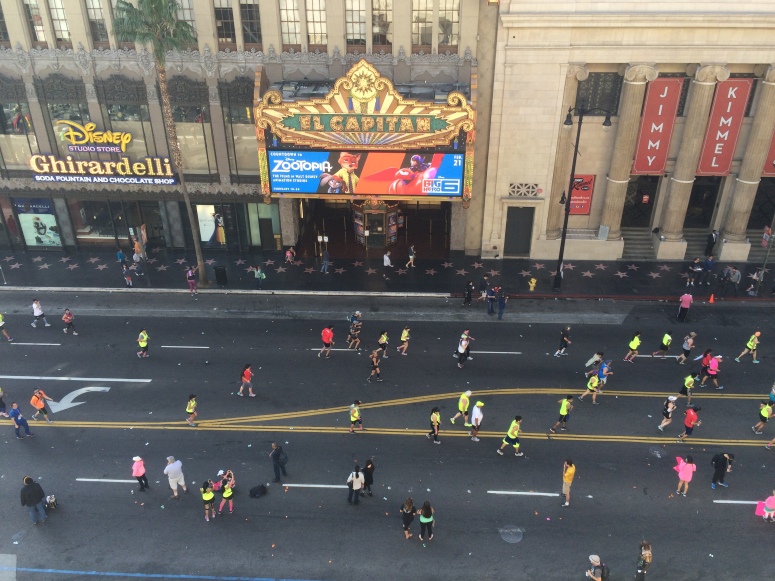 Once the people I knew had passed, I headed up stairs to get an overhead shot of the runners. 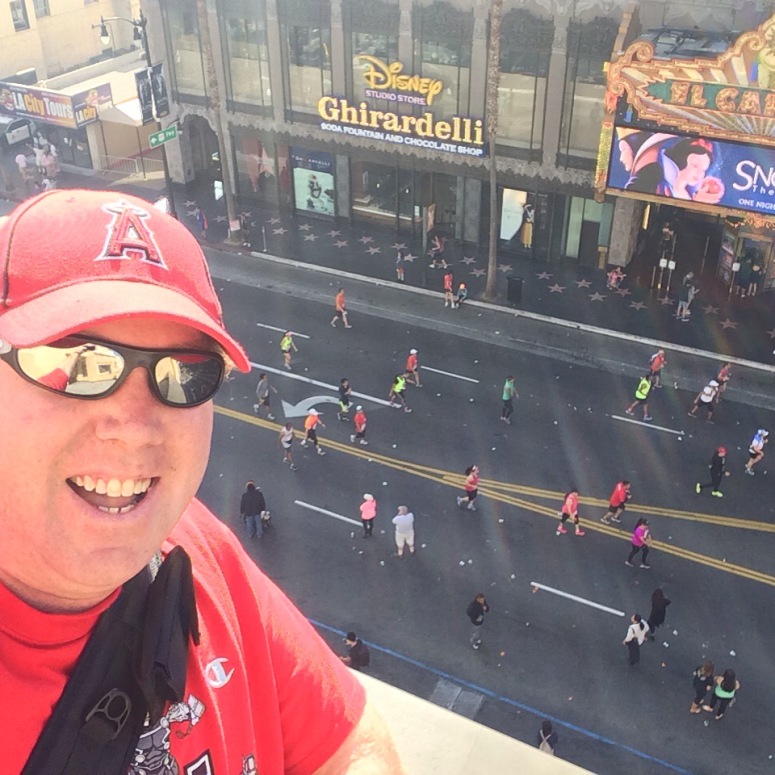 It was an amazing day of spectating! From watching the elite runners to the back of the pack folks (pictured below), I saw it all. 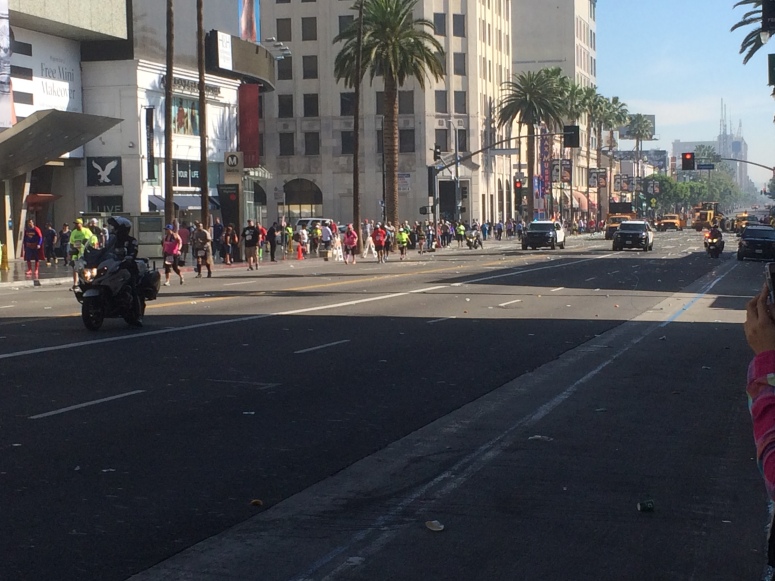 By the time I left, the police were closing down the street and having the runners hop up on the sidewalks. Honestly, this was a little heartbreaking to me. These folks would have to finish the last 14 plus miles without any aid stations and have to do so on the side walks. The cheering crowds would not be there. It would be like a training run. Only, at the end, there would still be a finishers medal. The Los Angeles Marathon doesn’t have sweeper buses. They move runners onto the sidewalks and allow them to finish. There are even volunteers that will wait into the evening to give them a finishers medal at an alternate finish area in Santa Monica. 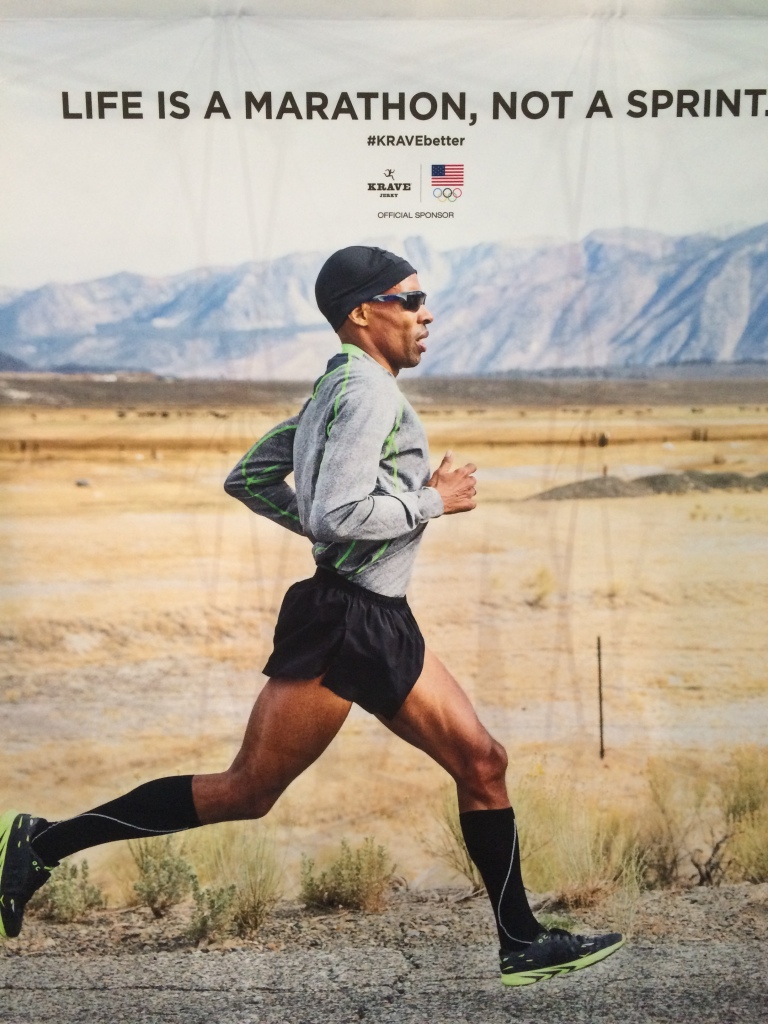 Even though I haven’t gotten off to the start in this training cycle I would have liked to, I can turn it all around beginning this week. After this past weekend, that’s exactly what I intend to do…turn it around. Here’s to a much better week of training and finally getting my head in the game for this training cycle.

2 thoughts on “Back to Blogging after a Week Off”