While I’m excited about this week, we need to discuss last week today. I titled this post “Perspective” because it’s amazing how quickly our perspective can change. I’ll explain more as I go through the week.

Not much to report about Monday. So, I’ll start with Tuesday. Unlike the previous few weeks, I made sure to get out of bed at 5:30am and hit the road. I didn’t sleep super well on Monday night. So, there was good reason to put off the Tuesday morning run again. I’m glad that I didn’t. Why? My best pre-work 3 mile run yet and one of the best 3 mile runs I’ve had in quite some time. I finished in around 33 minutes, 30 seconds! It felt amazing! I did run the last-minute and a half to get there. However, it’s almost amazing that I was this fast. I didn’t feel this fast in the first mile. The second mile, I was a little distracted. However, I found myself at the end of the second mile in just over 23 minutes. This is fast for me! So, I switched up the run/walk intervals to the 1/1 intervals. By the time I got to 2.8 miles, I saw the possibility of finishing quicker than 34 minutes and decided to run the rest of the way! Wednesday was a rest day because I got out and ran on Tuesday! On Thursday, I got up again and hit the streets of Pasadena again. This was the day of the Walt Disney World 5K race. So, I woke up with pictures and posts of friends who ran the 5K race. That inspired me to add an extra 0.1 miles to my usual 3 mile run. I was a little slower with this run by around 25 seconds. However, it was still a fantastic time! I had an 11:22 pace at the end of 3 miles and didn’t slack off in the final tenth of a mile!

Saturday morning, I woke up to watch some of the finish to the Walt Disney World Half Marathon, streamed live on the Disney Parks blog. It was so much fun to watch everyone finish! It was equally fun to listen to Rudy do his race announcing best. I was so excited about watching the finishers that I got out the door late for my scheduled 20 mile run.

I’m sad to report that I quit just after 12 miles. There was  a lot of poor planning that went into this. Friday, I went from work, to pick up a good meal for carbo loading to have at dinner. Brooke and I had dinner and then headed off to do our laundry. I didn’t get done with everything until 9:30pm. Then, I still had to set out my running gear for Saturday morning and spend time reading the Bible and put away my clothes. Lots of stress. That’s not how you should do a night before a really long run.

Mistake number 2 for me was my strategy for the run. I decided to head off to the Rose Bowl loop and run 7 laps (with the last mile being un-timed). I wanted to use this run to see how my conditioning was over 13.1 miles. So, I started off with my run 30 seconds, walk 1 minute intervals. The first lap went fine. I was a little slower than my weekday runs. However, I also wasn’t switching up my intervals in the last mile either. As I started the second lap, the rain started. I’ve never run in rain for more than a half mile before. When it started, I had a decision to make….continue to run or quit. I decided to see how bad the rain would get before deciding to quit. The second lap went pretty well, too. I was a minute over the 12 minute per mile pace over 5 miles!

The third lap was were the fatigue started. I lost a little bit of time on the 7th mile as I sort of expected. By the end of the 8th mile, I saw that I was close to beating my half marathon PR! It looked just as good at the end of the 9th mile! In one more lap, I knew I would know more.

The first half mile of the 10th mile was very difficult. I knew it would be. However, I just felt beat. By the time I had crossed 9.5 miles, I could see that I was not going to beat my half marathon PR. That’s when it happened. In that moment, my perspective on this run completely changed. Even though the rain had stopped by the end of the 9th mile. The realization that I wasn’t going to hit the half marathon time I wanted changed the way I viewed all that was left in this run. Rather than maintaining my focus on the time I would have at the end of 13.1 miles, I was now thinking non-stop that I would still have 8 miles left at the end of this lap. I would have to face the difficult mile of the course I was on another 3 times.

I decided to walk the remaining half mile to cross the half way point. My time wasn’t horrible for 10 miles. I tried a run to start off the 11th mile. The first run I tried, I finished all 30 seconds but it was a struggle. I walked a minute and a half and tried running again. Nothing. I lasted all of 10 seconds. So, I walked some more. I stopped at 10.5 miles to eat something. Maybe with some more calories, I’d be okay. Every run I tried was so difficult. By 11.5 miles, I was mentally done. With 8.5 miles to go, I couldn’t convince myself to even try running again. I walked all the way back to my car. I felt defeated and exhausted.

What do you do when you have a bad run? I turned to the Jeff Galloway book my wife got me for Christmas. I’m still processing some of what I’ve read. However, it was a big help at getting me away from the defeat of quitting a training run early and thinking about what to do next. 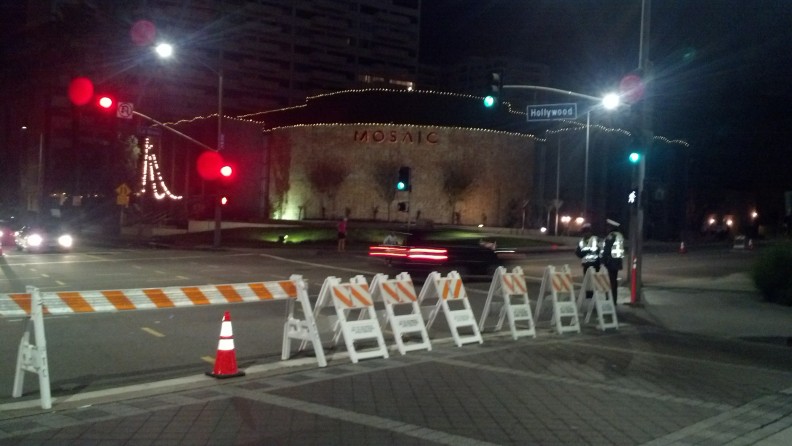 Ok, not the best picture of my church. However, Sunday morning, Pastor Hank delivered the message that I absolutely needed. It dealt with perspective and keeping the light inside of us turned on. It’s kind of hard to explain in this post. If anyone is interested, go to the iTunes store and search for “Mosaic Church” they usually have the week’s message uploaded as a Podcast on Tuesday. After church, Brooke and I had lunch with some friends at Buffalo Wild Wings. We saw these stars on the Hollywood Walk of Fame on the way. My wife is a huge New Kids on the Block fan. We all found it interesting that the stars for New Kids on the Block, Backstreet Boys, and Boys II Men, were all together. Where was Nsync? Hmmmmm. Oh, I forgot to mention that I watched the finish to the Walt Disney World Marathon via live stream on the Disney Parks Blog to start my Sunday morning. I even got to see Jeff Galloway and his wife finish! Funny thing about the live feed…every time someone had some physical difficulties at the finish there were “technical difficulties” until they were helped off camera. And I wore one of my 2014 Walt Disney World Marathon shirts! Two weeks into 2015 and two weeks with 4 workouts! Perspective.

The Journey to 160 continues with some good news! I started the year off at 248.8 lbs…..gained a little bit between the first and the fourth. Then, lost 2 pounds in one week! Overall for the year, I’ve only dropped 0.8 lbs. Perspective.

In my pursuit of cutting soda out of my diet, I was completely on point! This was the first week of focusing on that part. I only consumed 1 soda per day this week! One more week of this. Then, the cuts come. With it being a runDisney week, it will be hard. But, it’s got to be done.