Five years ago, I was a day more than one week away from getting married. I mention this to say that on August 8th (one week from tomorrow), my wife and I will be celebrating 5 years of being married! Where did the time go? On our 1 year anniversary, we flew off to Hawaii to celebrate…the island of Oahu to be more precise. As part of that vacation, we took the better part of a day to go on a tour of where they filmed the ABC Television series Lost through Hawaiian Escapades. If you want more information about this amazing tour, check out their website here. We took the tour on August 7, 2010 (almost exactly 4 years ago today!). So, on this Throwback Thursday, I thought we could go back and revisit that part of my anniversary trip to Oahu. Any fans of Lost out there? 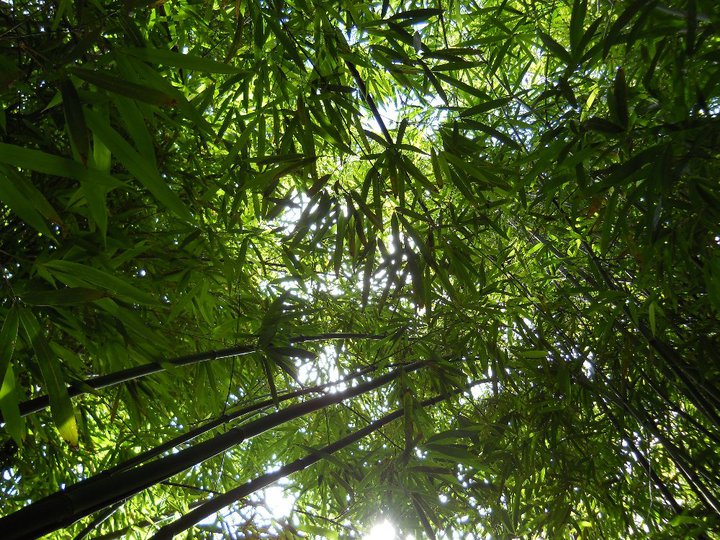 As you may remember, the pilot episode begins a little like this…

Now, on the tour, our guide was completely honest with us in telling us that this spot might not have been where they filmed the opening sequence. He told us that there were a couple of spots on Oahu where they were rumored to have filmed the opening. This was one of those spots. Oh, I should mention here that my pictures aren’t exactly in order of how we saw them.

One of the highlights of the tour was visiting the “crash site” beach. 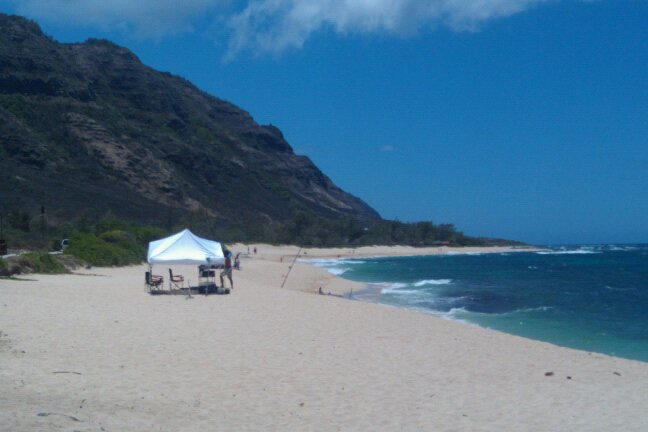 The beach was beautiful! 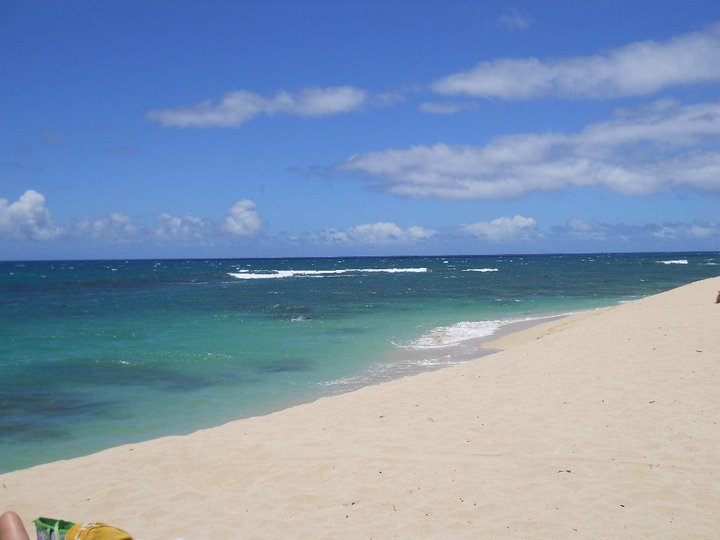 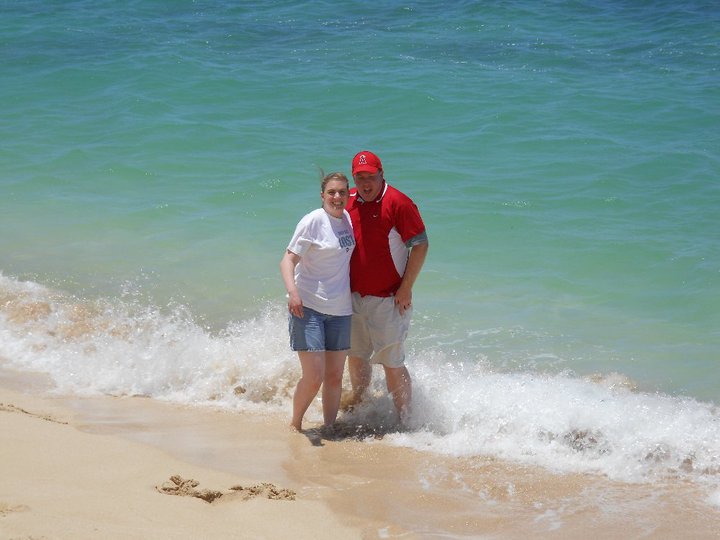 We had to go in the water a little. Right? Someone on the tour got a picture as the water unexpectedly rolled in. As you can tell, I wasn’t expecting this. It’s a funny picture, though.

In the pilot episode, we got introduced to the Smoke Monster. Only, we didn’t know it at the time. Here’s what the view would have looked like, if old Smokey had made his appearance in the daylight. 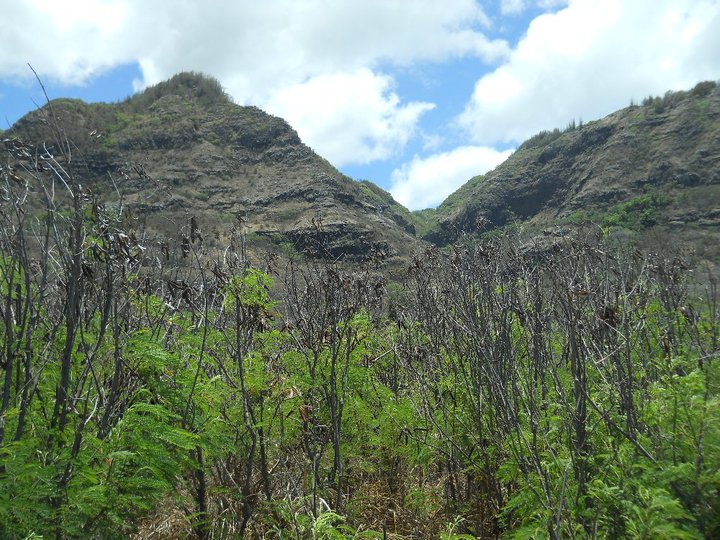 Can you see it? One of the things that the people behind Lost liked about the location for the crash site beach is that there was a small airstrip right behind it. That made it perfect for flying things in…like all the plane wreckage. They also used this airstrip to be in Nigeria where Mr. Eko was escaping from the drug lords with a bunch of Mary statues with drugs in it.

Speaking of Nigeria and Mr. Eko, remember this scene? Well, this is what the area looks like without the added background… 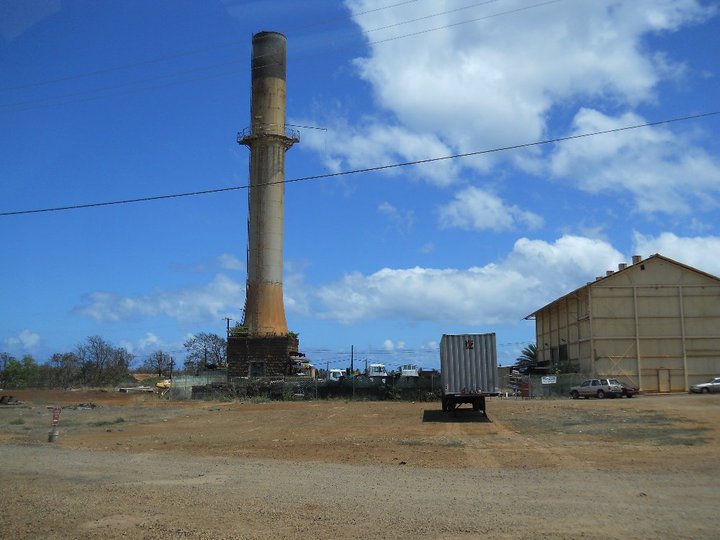 About the only thing recognizable is the tall tower looking building. What we were told on the tour was that Oahu makes a great place for filming because it can be molded to look like anywhere in the world. They filmed almost everything on this island.

One of the many stops that I was looking forward to was seeing where the above scene was filmed. 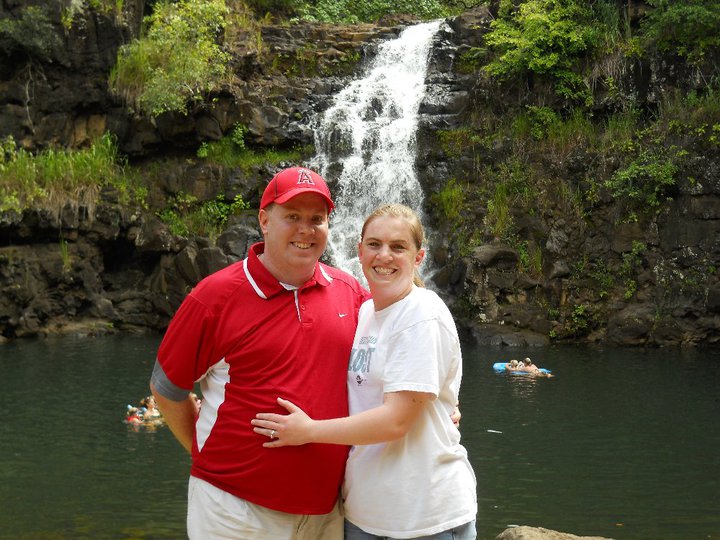 It was a little bit of a hike to get there. However, the hike was totally worth it. We even got to in the water if we wanted to. I do have a picture of me standing in the water. Honestly, I don’t know the actors were able to so easily run into the water. The rocks were pretty sharp. The area between the walk way and this waterfall was not that large. So, they had to add some bushes to make it look like Sawyer and Kate had just walked out of the jungle to see this spot. In reality, they filmed the part before Sawyer and Kate found the waterfall in a different location. Oh, the magic of Hollywood! Also, this picture is one of my favorite pictures from the trip or of with my wife and I all time. We were one day away from being married for one year when this picture was taken!

Another fun part of the tour was seeing where, as Sawyer would say, New Otherton was filmed. 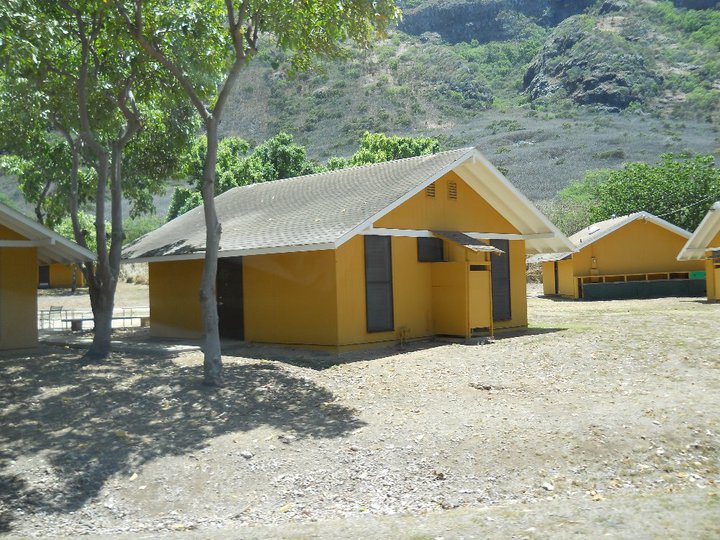 In reality, it’s a YMCA Camp site. As you can see, it didn’t take long for the grass that was installed for the scenes in Lost to go away. So, it wasn’t as interesting in person as it was on the show. 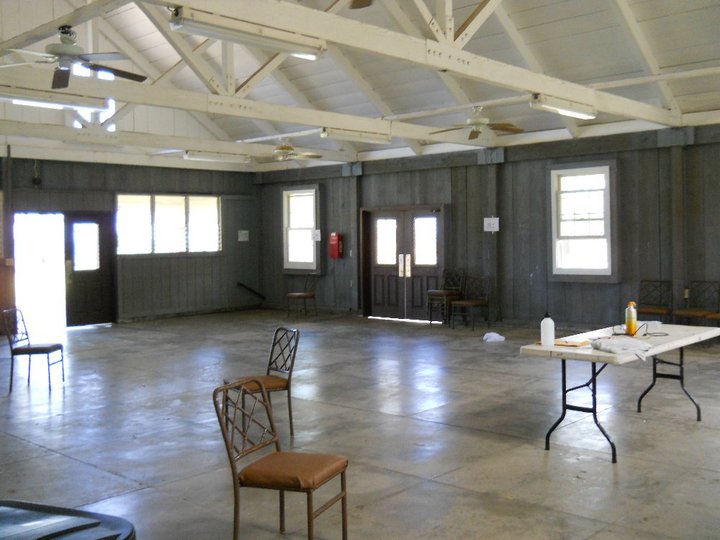 I couldn’t find a you tube clip from inside the Other’s Assembly Hall. However, this is where they held Sayid and a few others captive.

This is the episode where we first learned about life with the Others. 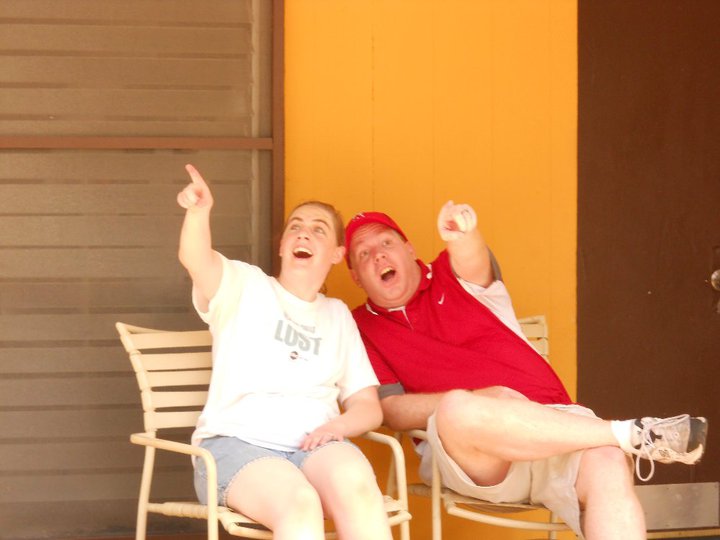 Brooke and I were pretending to have seen Oceanic 815 split apart in the sky…like in the you tube clip.

One of the more beautiful places we got to visit on the tour was where Jin and Sun got married. 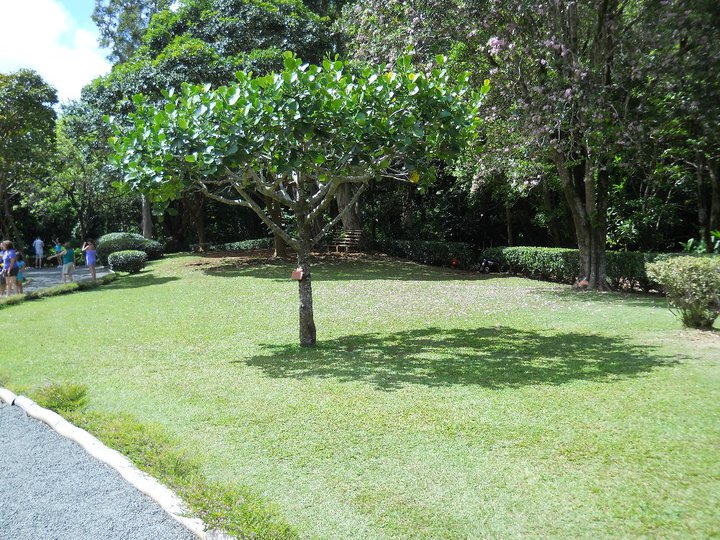 They filmed their wedding on this patch of grass. 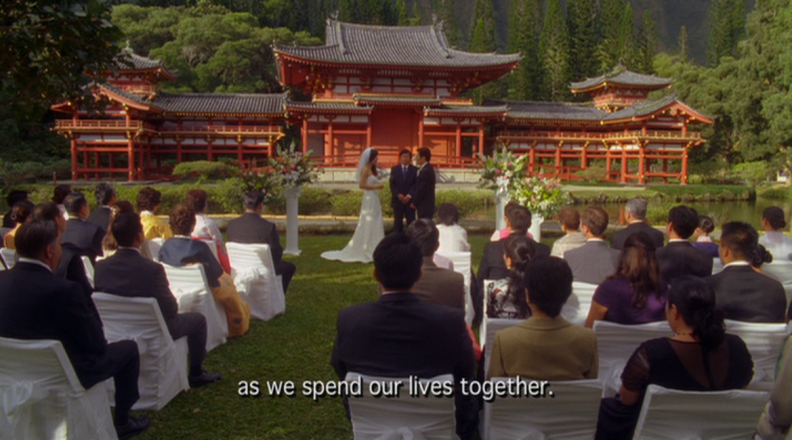 Camera angles were a little different for the wedding scene. 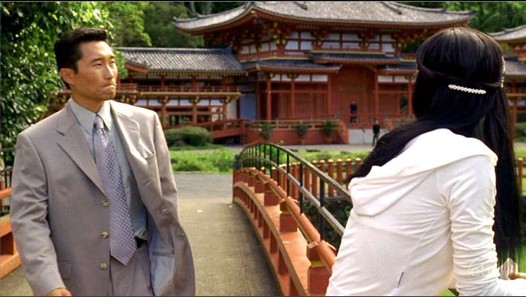 This is also where Jin proposes to Sun. Here he’s going in to propose… 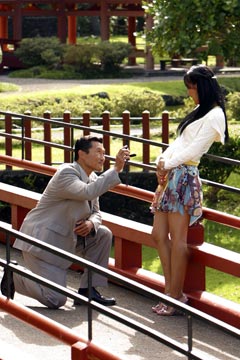 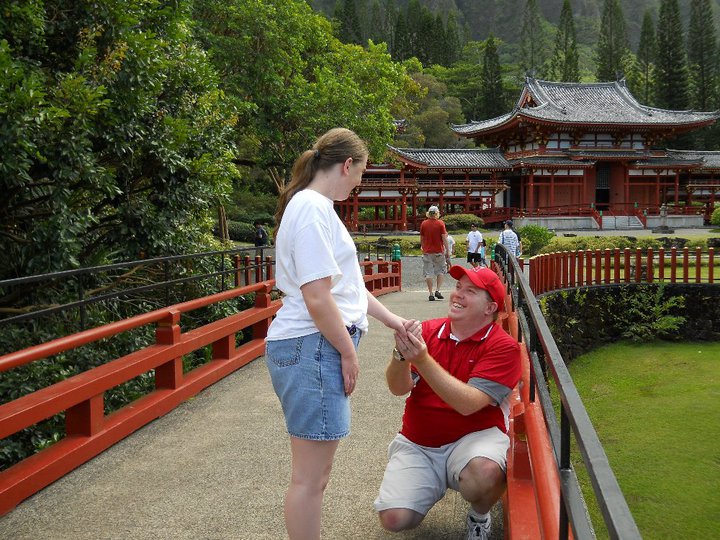 Brooke and I attempted to re-create that moment. I guess I was on the wrong side. Oh well. The location for this was outside of a Buddhist temple. That’s the building in the background. The temple is located at the back of a cemetery. We drove through the cemetery (which might also be the only pet cemetery on Oahu) on our way to this spot.

We also got to see the liquor store where this scene happens. 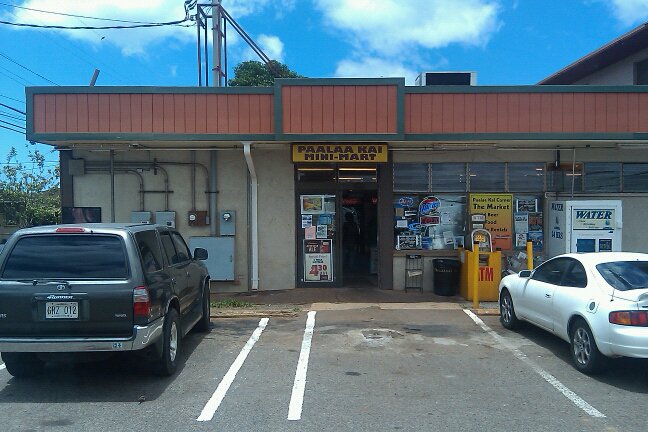 Of course, they had to change the name of the store. However, the entire scene was filmed in only a couple of hours. Our tour guide told us that many of the places they filmed were done so in a short period of time because that’s all they had. 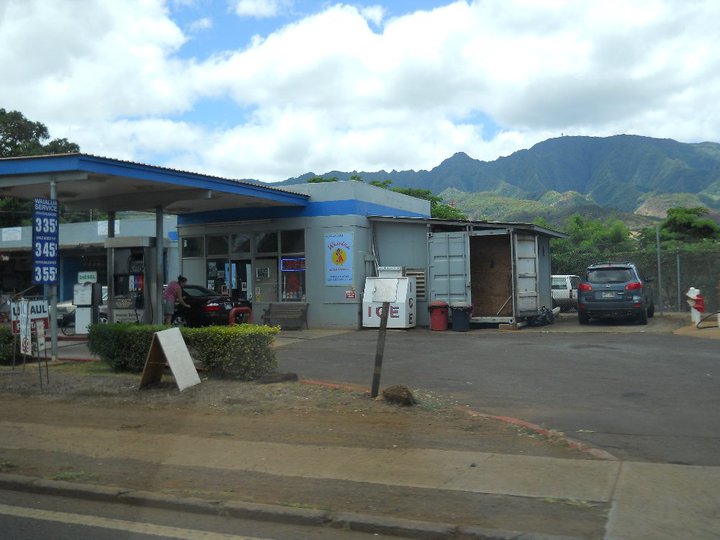 Another place that was fun to see that I couldn’t find a clip for was this gas station. As you might remember Sawyer has a daughter named Clementine. Her mom became a con artist like Sawyer and attempted to pull off a con at this gas station. When the con failed, Kate stepped in and helped her out.

Speaking of Kate. We know she was a fugitive from the law. In season 1, we saw how Kate ended up on Oceanic 815. She was running from the law and ended up in Australia. She found work for the man in the vehicle with her in the Australian Outback. When he turned her in, the above car chase happened… 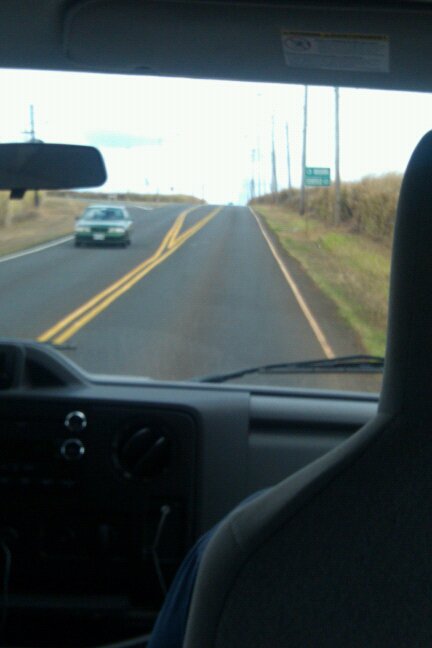 I hate to ruin it, but it wasn’t filmed in Australia at all. It was filmed on this road in Oahu.

On yet another fun part of the tour, we got to visit where they filmed this scene. 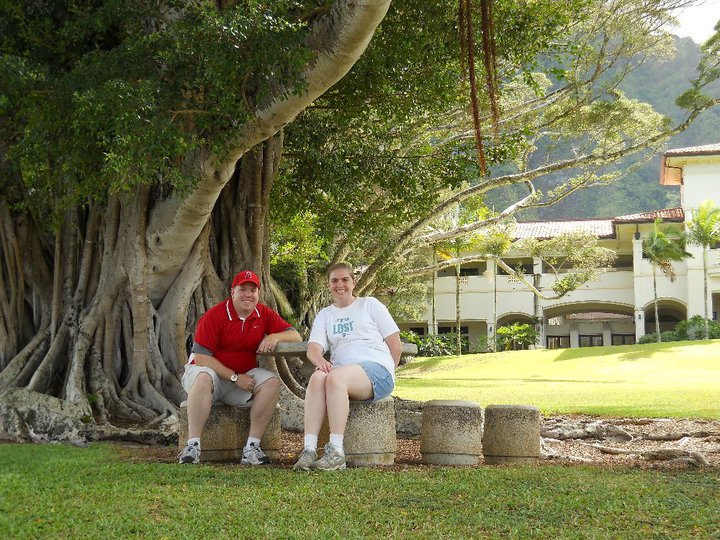 You might be interested to know that this wasn’t an insane asylum at all but it was the campus of a college in Oahu. 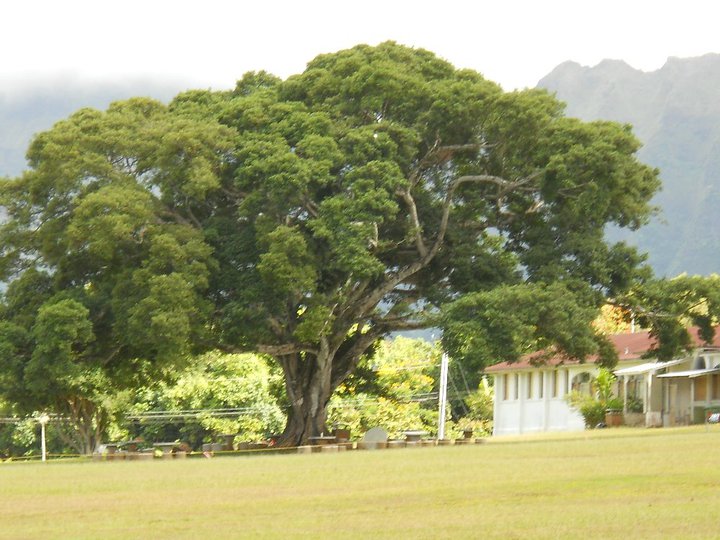 Although, the scene with Hurley and Charlie was filmed by this tree and not the one Brooke and I sat by. We didn’t have enough time to venture all the way up to this tree. So, we settled on taking a picture by an area that looked similar that was closer to the parking lot.

This is the scene where Penny and Desmond meet for the first time. She’s running the steps in a stadium. Jack meets Desmond while doing the same. 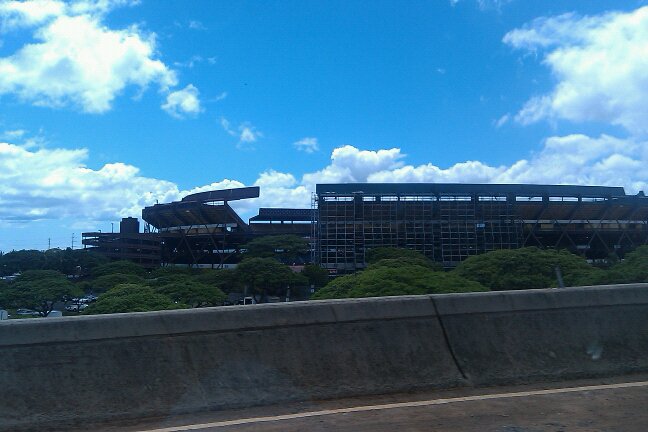 Those scenes were filmed at Aloha Stadium…home to the University of Hawaii’s football games and the NFL’s Pro Bowl. We didn’t get to stop by the stadium, but it was pointed out as we drove by. 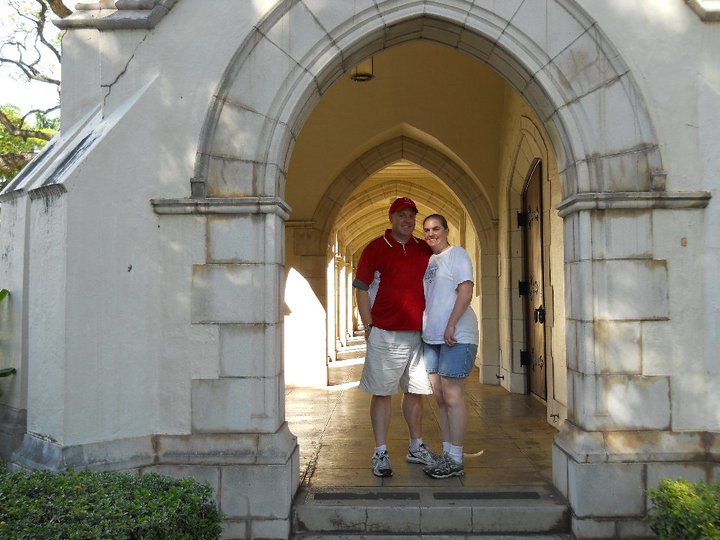 In these hallways, a few scenes were filmed. Early on, this is where Liam informs Charlie that Driveshaft has been signed.

In my favorite episode of Lost (The Constant), these halls serve as the halls of Cambridge University where Desmond meets a young Daniel Faraday. 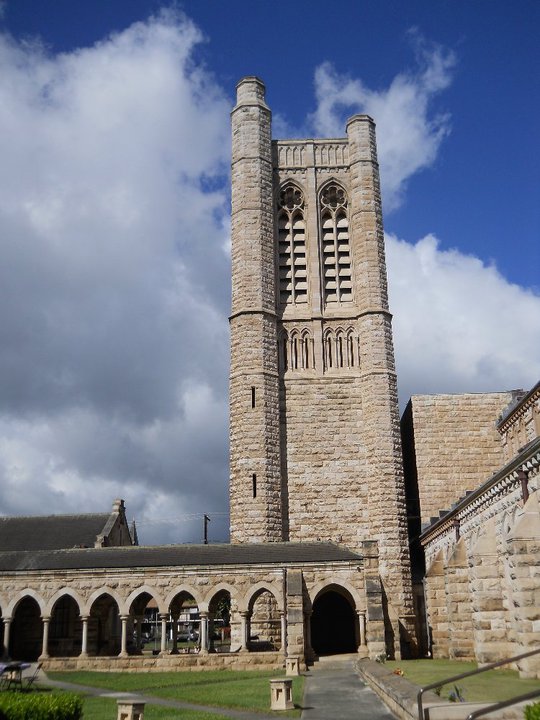 In reality it’s a church. If my memory is correct, this is the same church that Charlie goes to when he wants to leave Driveshaft to confess his many sins.

Here are a couple of buildings that were used in the filming of this scene…London in Lost. 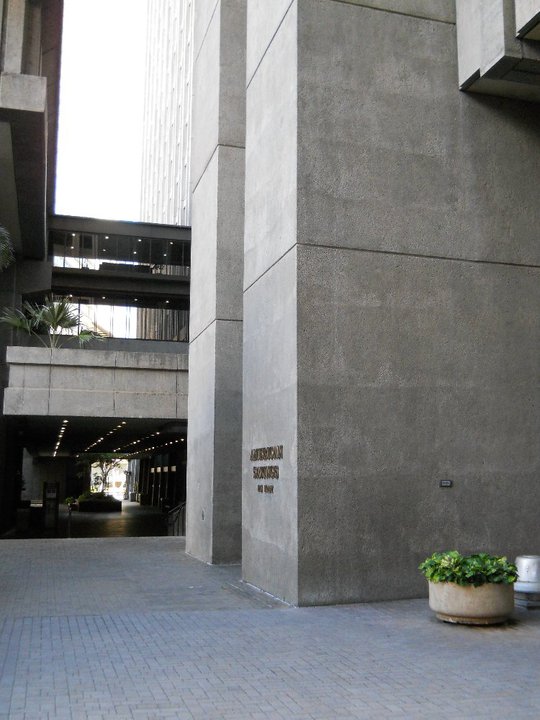 At the start of the scene, Desmond runs right by this spot… 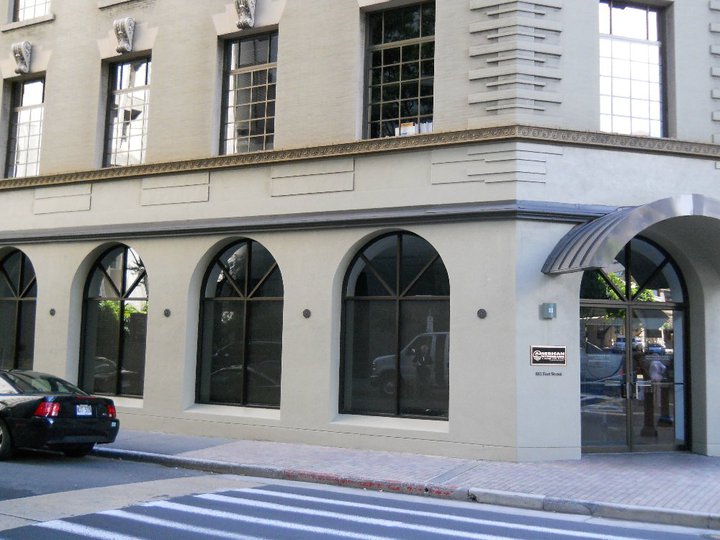 He sees Charlie playing his guitar in front of this building.

This is the scene where Jacob visits John Locke off the island. He encounters Locke right after Locke has been pushed out of a high-rise building, causing John Locke to be paralyzed. 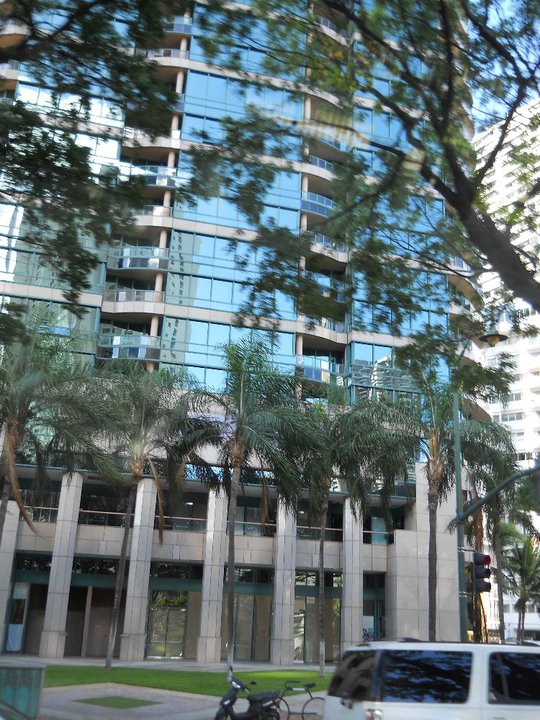 This is the building where that scene was filmed.

There is more I could share, but this post has gone pretty long. I hope you enjoyed travelling back in time with me today. It was fun to relive this fun-filled day in Oahu! If you’re ever in Oahu, I highly recommend this tour. They send out a bus to many of the hotels in Waikiki. So, you don’t have to drive anywhere to catch the tour. I would also recommend that you book in advanced. The tour is for small groups of people. We had so much fun talking with other fans of Lost and the tour guide was very knowledgeable about the show and filming locations. If you’re someone like me who works in entertainment, you will probably find some of the explanations about the filming process rather elementary. But, the guide we had was still incredible. Another benefit of this tour is that it takes you all over the island of Oahu. So, it can be a great way to experience the entire island.

2 Replies to “Getting Lost in Hawaii – Throwback Thursday”