Last week, I recapped the races I participated in as part of the 2014 Walt Disney World Marathon Weekend. If you read this post of mine, you know that Brooke and I did more than just participate in the runDisney races on our trip. So, now it’s time to recap our other experiences from our trip to Walt Disney World from January 7 – 14, 2014.

On Tuesday, January 7th, Brooke and I were up bright and early to head off to LAX for our flight on Virgin America Airlines to Orlando. The line to check in was super long (even with our online check in already completed the day before). The line to get through security was even longer. Our original plan was to find a nice sit down kind of restaurant near our gate to have a good-sized breakfast. After all, with an 8:35am take off time and a 4:30pm local landing time, we knew we would not get lunch. With all the waiting in line, we barely had time to order and eat a breakfast sandwich from Burger King at the airport before we needed to be ready to board our plane. I will give Virgin America Airlines credit for a pretty close to on time departure and an early arrival in Orlando. The above photo was taken around the half way point. Our actual flight time was a little over 4.5 hours. So, this photo was taken around 2 hours into the flight. By then, we were getting excited about getting closer to Orlando! 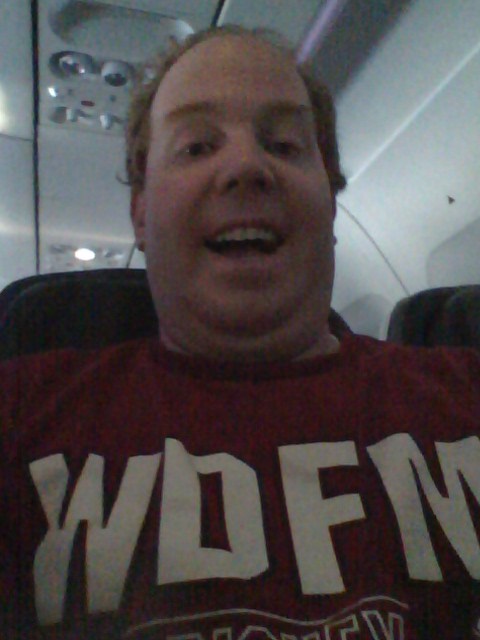 Want to know what I loved about flying Virgin America Airlines??? The television screens in each seat! Most of the first few hours was spent watching ESPN! Ah, heaven! As much as I enjoyed watching SportCenter for a few hours, by then, I’d seen all the stories I needed to know. So, I switched to watching Spirit of the Marathon. After all, I was heading out to run my first full marathon. I finished Spirit of the Marathon just in time to get ready for landing! Talk about great timing! The flight to Orlando was pretty smooth and uneventful. I liked the crew we had on Virgin America. They reminded me of my first times flying Southwest Airlines. The captain was very comical during the flight and after landing. The crew that served us onboard was super friendly and seemed to have a similar sense of humor. So, I would say that I LOVED flying with Virgin America Airlines and will most definitely fly with them again.

Once you land in Orlando, you quickly find your way to the monorail. Okay, they don’t call it that. But, to this Disney fan, it is a monorail. Our first ride of the trip!

When we came to Orlando on our honeymoon, Brooke got a similar picture here. So, of course, we had to take the picture again. I love the Orlando Airport! 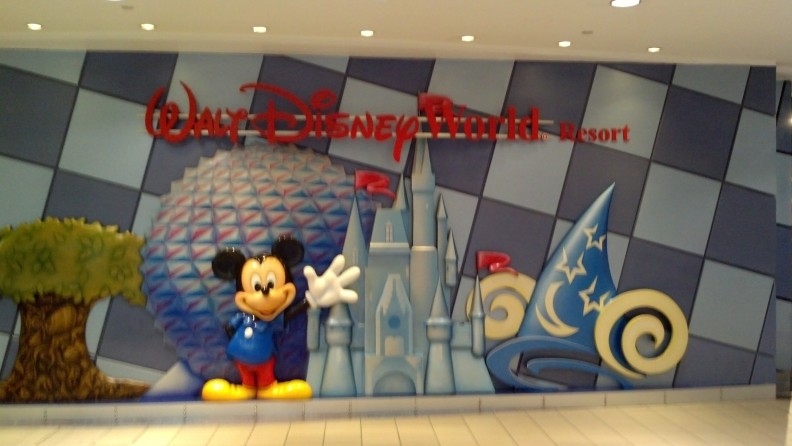 Right across from the fountain is my favorite place in the airport. Welcome to Walt Disney World…I mean Orlando!

I said hello to Mickey before we made our way to the Magic Express.

It’s kind of exciting to see this. After all, you’re now about to enter Disney territory. The Magic Express will take us to Walt Disney World! 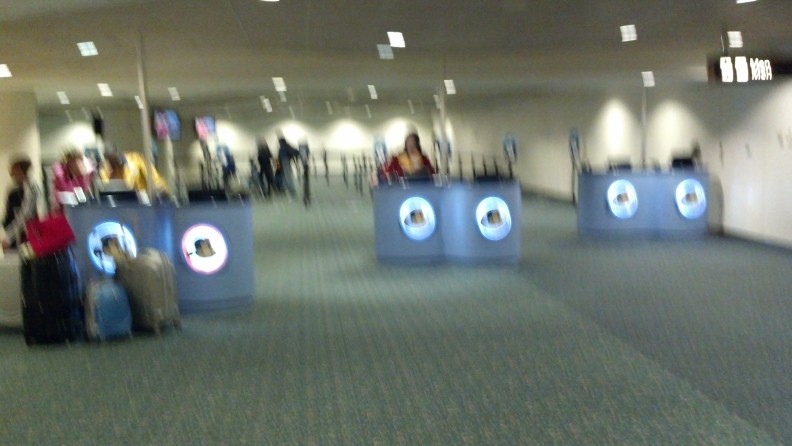 I’m sorry this picture is blurry. However, this is where you check in. 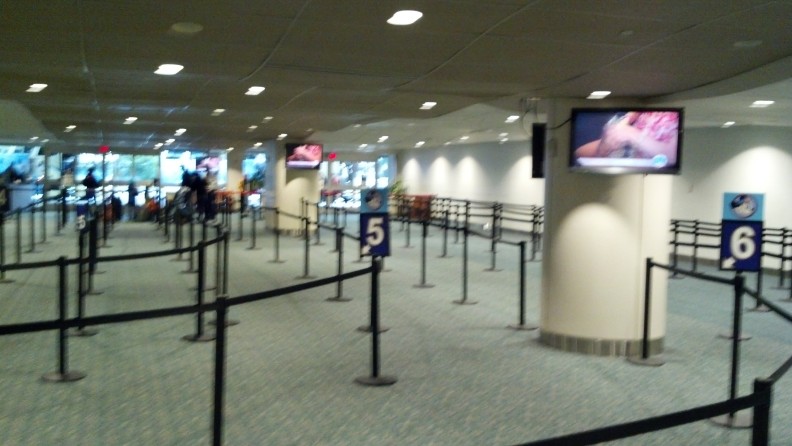 From there, you are sent into one of these lines.

We were in line 8. By the way, you might have noticed that Brooke and I are pretty bundled up. The high temp for Orlando on the day we flew there was 49 degrees. Coming from the suburbs of Los Angeles, where we had temps in the 70’s and 80’s since Christmas week, this was cold. 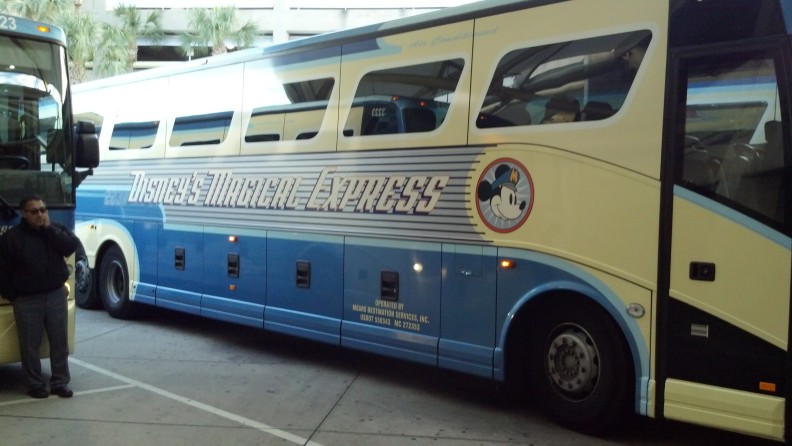 Onboard the Magic Express and ready for our fun-filled Walt Disney World Marathon trip to begin! 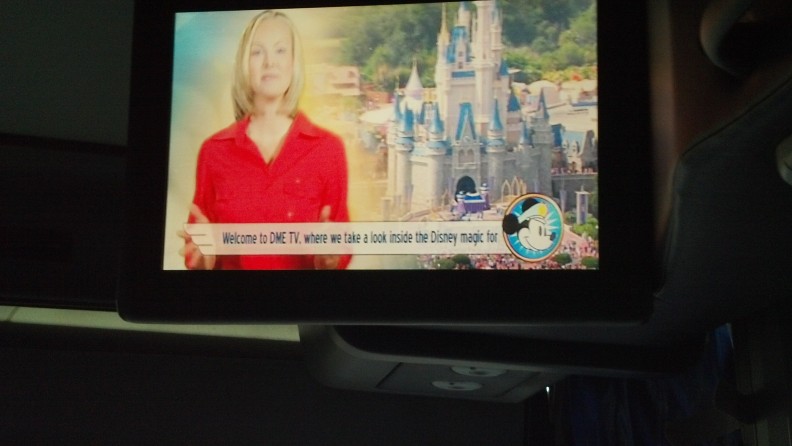 For those that have run in any of the runDisney races, you probably recognize this person. Carissa is one of the announcers for the runDisney races and she is also the host for the video that plays on your way from the Orlando Airport and your resort at Walt Disney World.

The view of sunset as we left the airport was pretty cool!

We’re here! To any person on a Walt Disney World vacation, this sight is absolutely magical. After a long day of waking up early, braving rush hour traffic in Los Angeles to LAX, wading our way through the check in at LAX and security, rushing through breakfast to make our plane, a 4 hour plus flight, and the drive from the Orlando Airport, it was great to know we would soon be arriving at our new home away from home for the week… 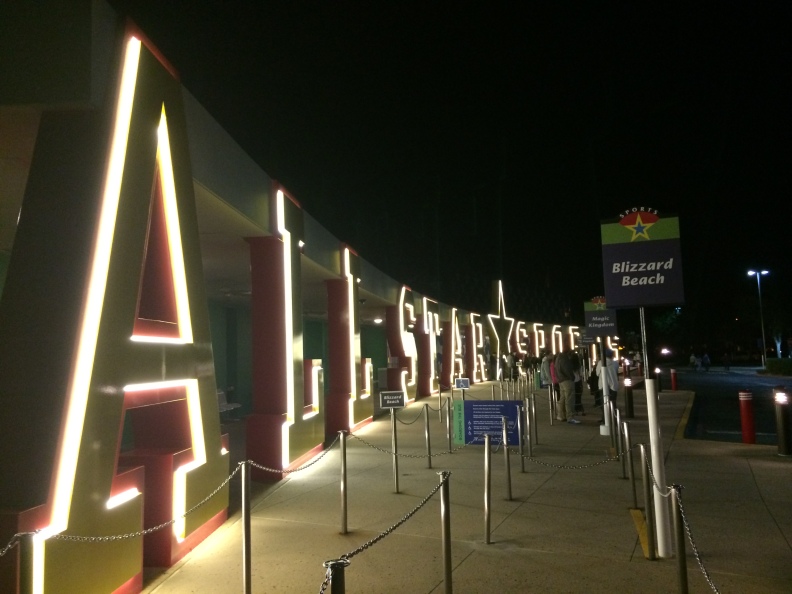 This picture wasn’t taken upon our first arrival. However, we stayed at the All Star Sports Resort. 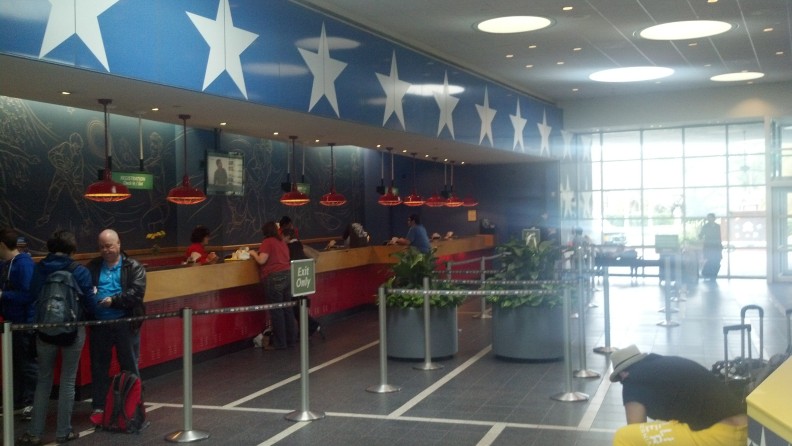 After getting off the Magic Express, we got in line to check in. I must say that it was pretty cold outside. However, Brooke and I were happy to be at our destination.

After getting checked in to our room, we headed there to drop off our stuff and get dinner. Both Brooke and I were really hungry. So, we ate at the End Zone Food Court at our resort. 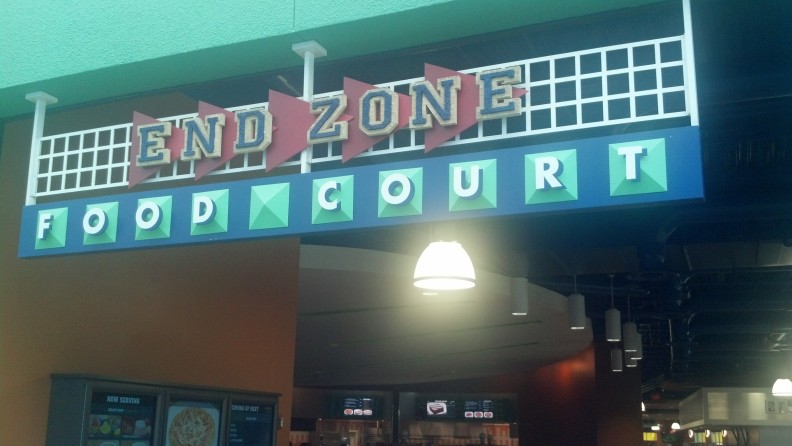 After dinner, Brooke just wanted to chill out in our room. I wanted to go exploring. So, while Brooke chilled out, I went exploring. 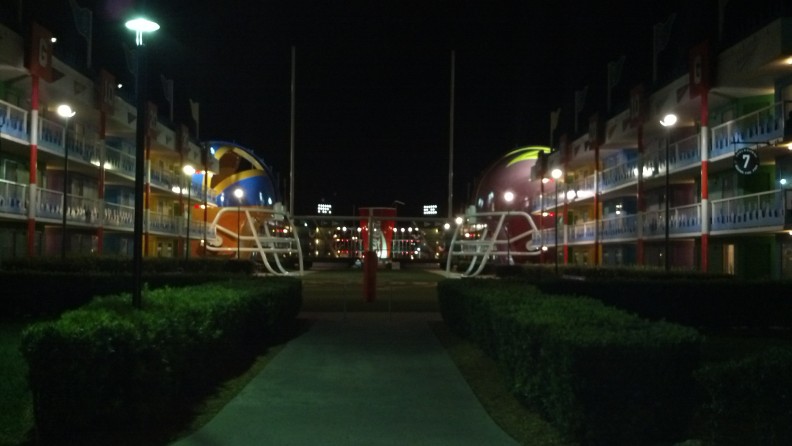 Brooke and I were in the “Surf’s Up” wing of the resort. However, with the All Star Sports, each wing has a different sport as it’s theme. I’ll talk more about the All Star Sports Resort tomorrow. For now, I just wanted to post a few pics that I took that first night. The football wing was awesome! They even had a miniature football field down the middle.

The last wing I got to was the tennis themed wing. There is a miniature tennis court going down the middle. On the court are these guys who don’t seem to know what sport this field is for. 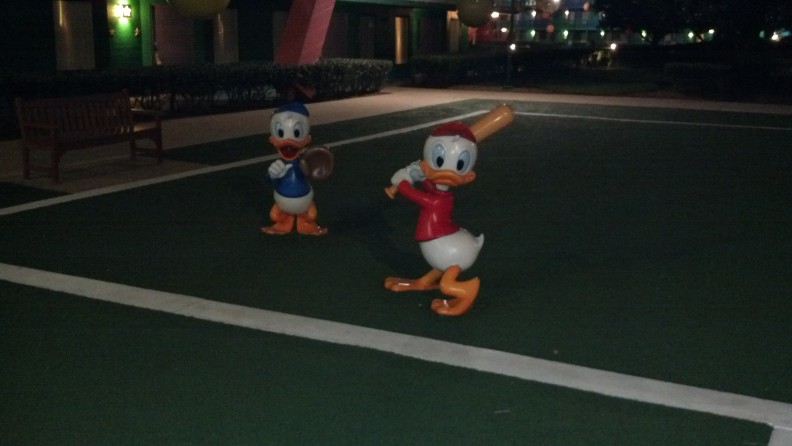 By the time I got here, it was getting too cold for me to stay out. So, I cut my tour of the resort short and turned in for the evening. The WDW Marathon Expo was the next morning and Brooke and I needed to be up early. Usually, it’s hard to get to bed early when travelling east. However, with the early wake up and being on a plane for over 4 hours, Brooke and I were beat and ready to sleep. So, it all worked out. 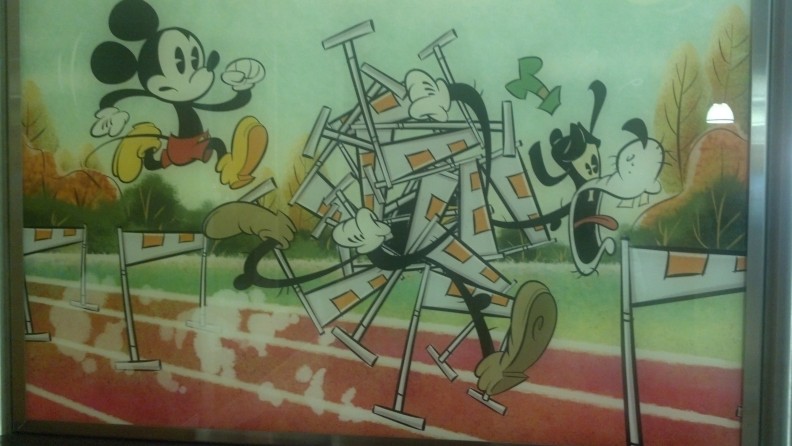 Tomorrow, I’ll give you all my review of the All Star Sports Resort with lots of pictures to give you an idea of what it’s like to stay there. When I was envisioning how to cover this trip, I really wanted to break the experiences up and not merely give a day by day, play by-play commentary. So, I started with the races because that’s what Brooke and I travelled to Walt Disney World to accomplish. From here on out, I’ll be mostly taking it in order that we experienced everything. However, with so much to cover, I can’t just cover each day in one single post. Those posts would get entirely too long. I hope that’s okay. There may also be a few interruptions to the reports if they are needed. After all, life is continuing while I’m going back to cover the trip. Also, I have my next race this weekend…the Surf City Half Marathon. At the end, I will also be making a new tab at the top of this blog where I’ll put all of the Walt Disney World Marathon Trip blog posts in one place. So, if it gets too confusing, you can come back and take it one post at a time.

Here are the other blog posts about this trip that I previously covered: