It’s been a while since I last wrote a blog post. So, it’s time to get caught up with how my Christmastime went. First thing to mention is that I got to sing in the choir for a Disney Christmas special that aired on ABC November 30th! It was one of the coolest things I’ve been able to do as a member of the Disney Employee Choir. Backing Adina Menzel and Kristen Bell on “When We’re Together” was a night I won’t soon forget! It was fun to not only be on television, but to just watch the two of them work. After all, they recorded this song for the Frozen short that ran before “Coco.” So, this was pretty much a first time performing this song live. We did 4 takes of the song. The first one was a pretty rough run through. But, being the pros that Adina and Kristen were, it all came out rather nicely.

Here’s a video of that performance (in case you missed the special). 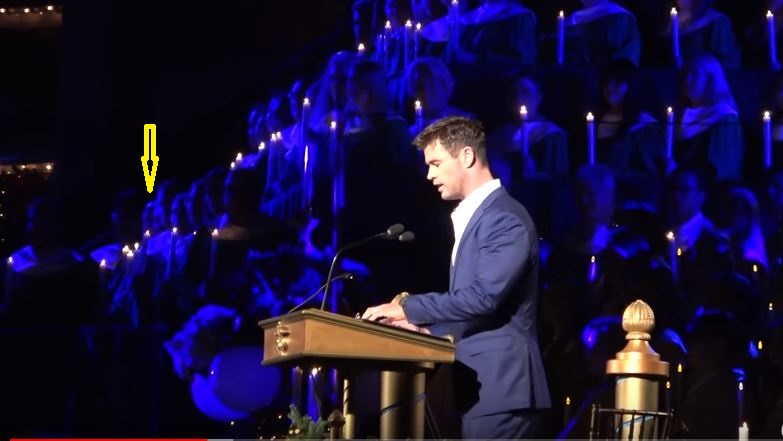 The arrow points to me. This was my 10th year singing in Candlelight with the Disney Employee Choir and I had as much fun as ever being apart of this long standing tradition at Disneyland. Walt Disney himself initiated the very first Candlelight Processional back in 1958. 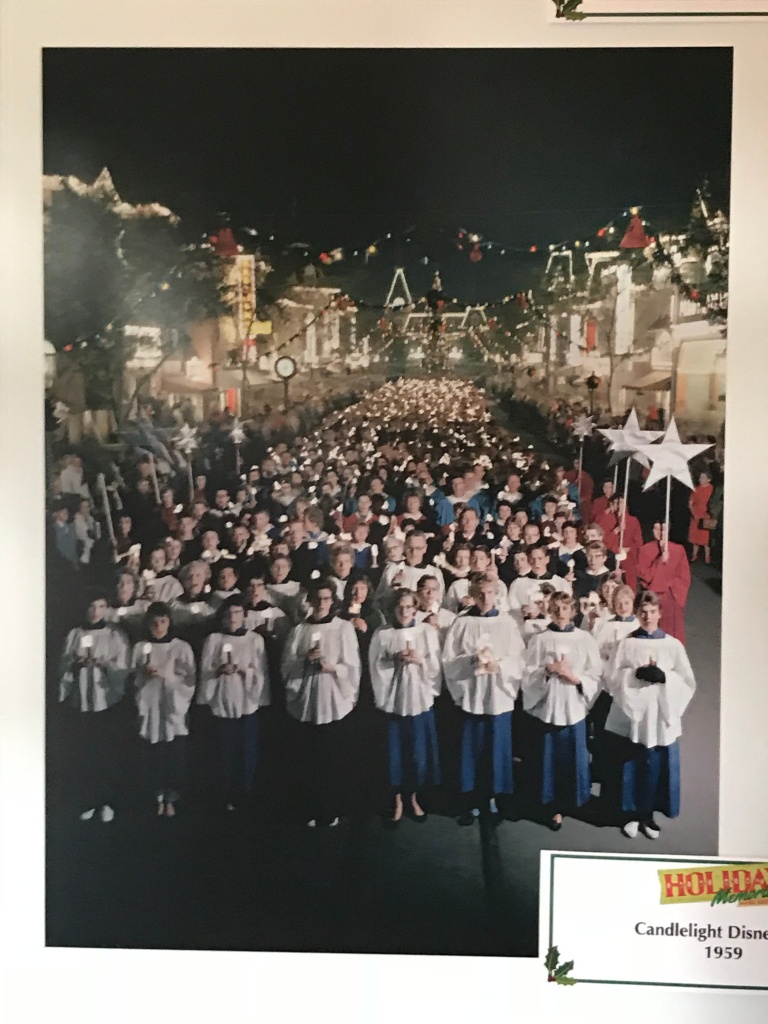 This image is from the 2nd Candlelight Processional from 1959. 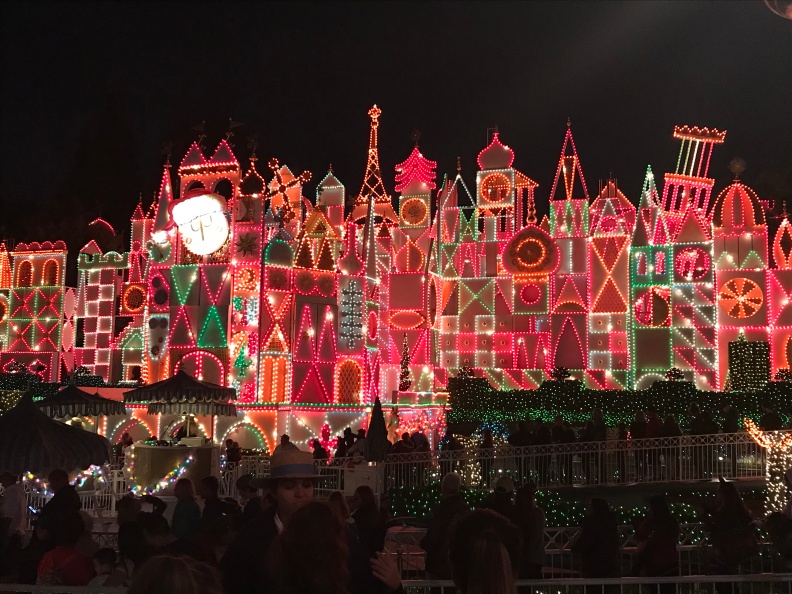 After singing Candlelight, I got to hang out at Disneyland and rode It’s A Small World because nothing gets you in the Christmas spirit like riding this ride at the holidays.

After riding It’s A Small World, we got out in time to take in the fireworks! 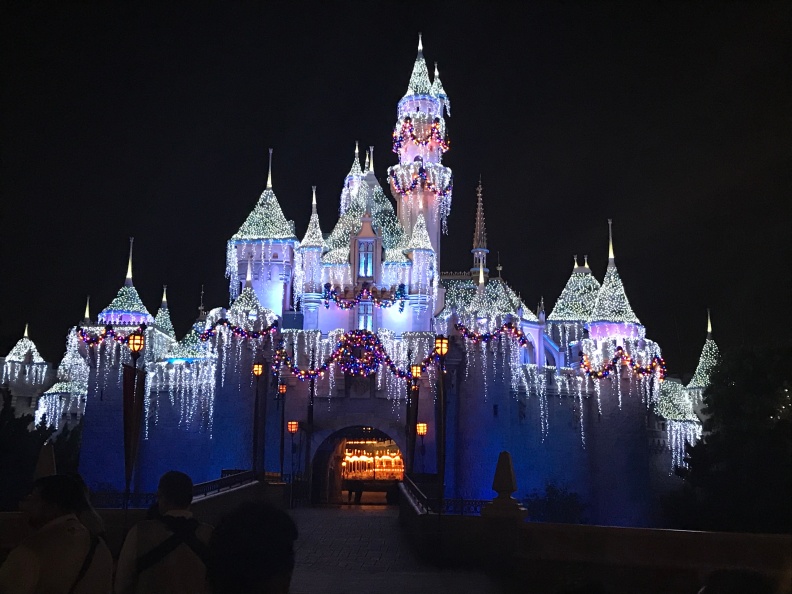 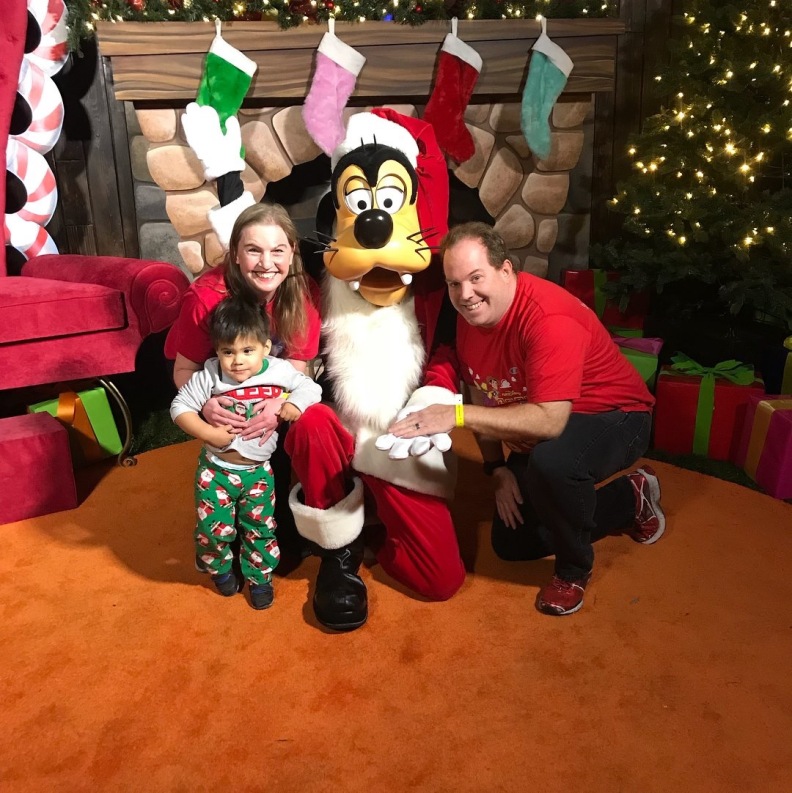 A week after Candlelight was Disney Lights Up the Season at the Studio. I’m loving that they are having this event on the weekend the last two years so Colton can come!

Colton was digging all the character photo ops. He was the one that actually spotted this photo spot with Olaf. 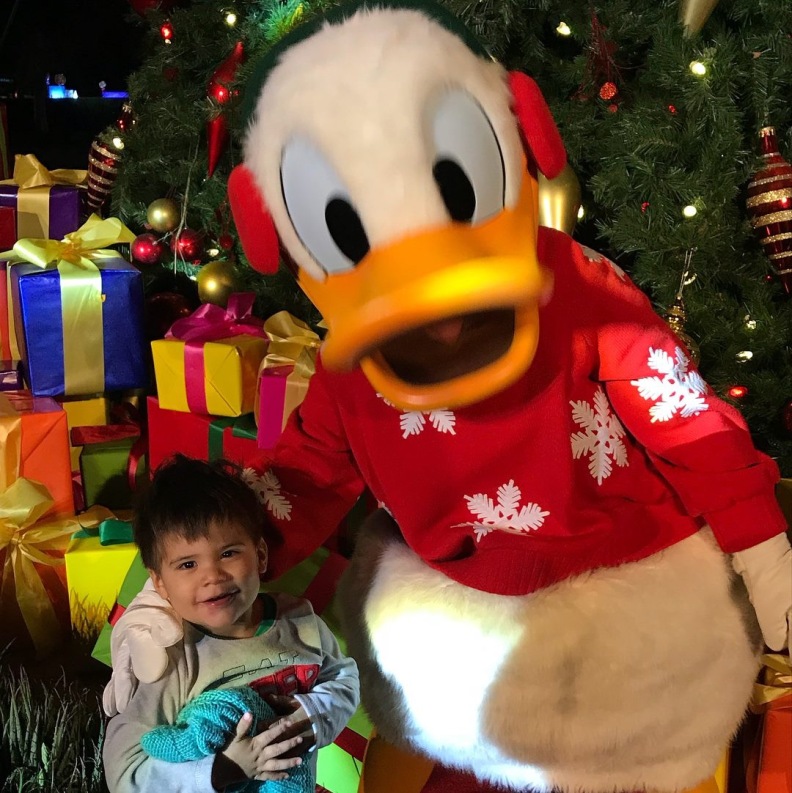 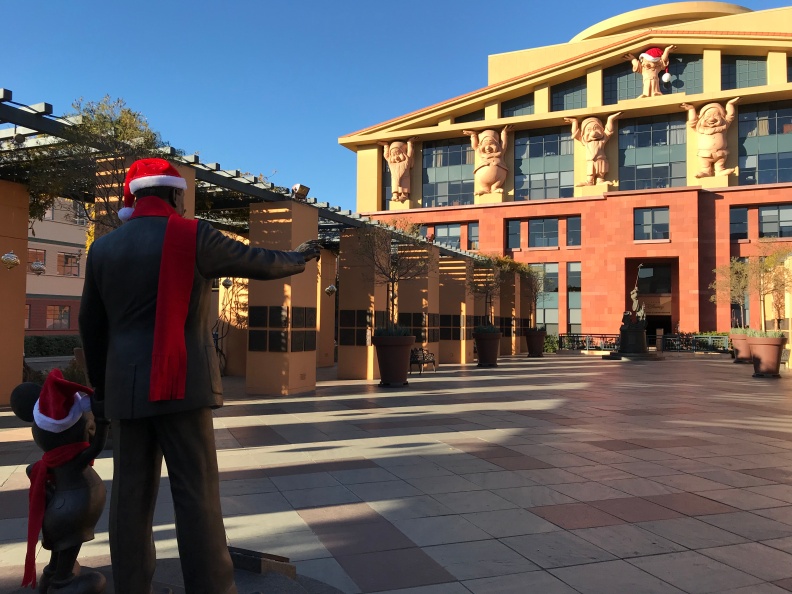 I took this pic the week after Disney Lights Up the Season. This year, for the first time, they gave Walt and Mickey red scarves and Santa hats!

On December 15th, Star Wars Episode VII: The Last Jedi opened in theaters. To mark the occasion, we had some First Order Troopers on the lot to keep us safe from those resistance fighters. They weren’t too happy with my Jedi loving shirt. These troopers actually talked with us! The banter was hilarious! 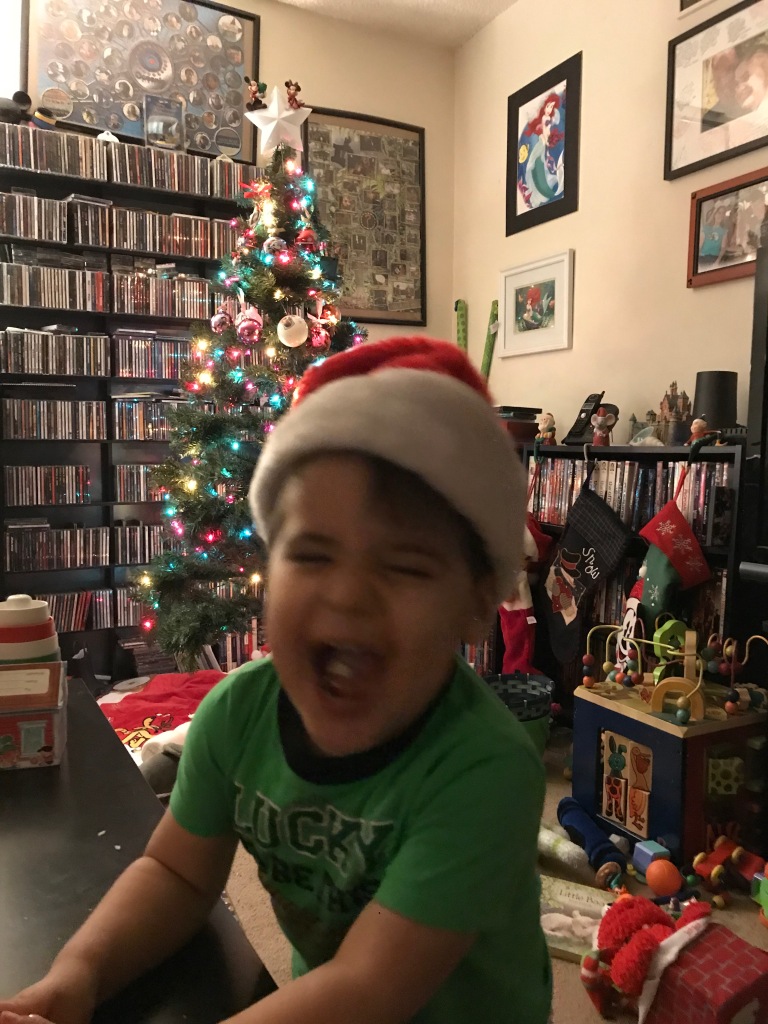 This past weekend was Christmas weekend. I headed off to my church’s “Christmas Eve” service one day early. 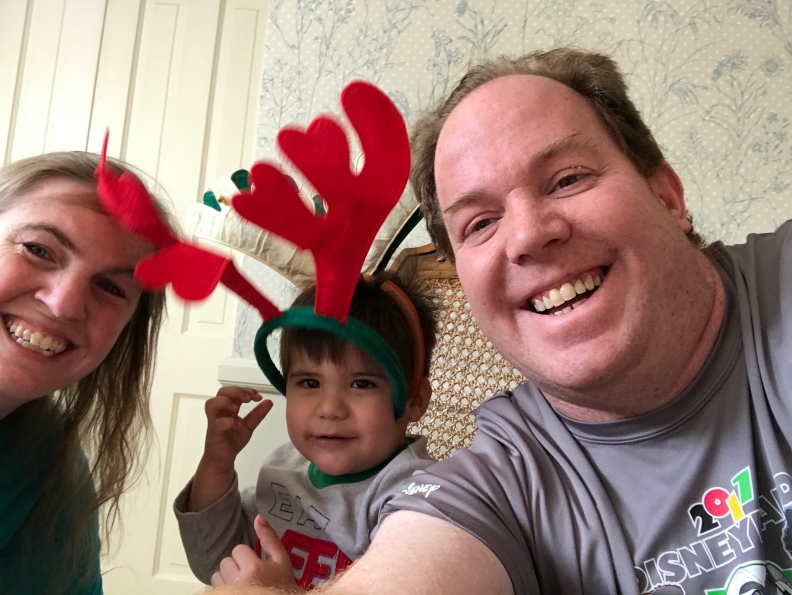 On Christmas Eve day, we spent the day with my parents and on Christmas day, we were with my wife’s parents. Christmas Eve, we went out to check out the fun Christmas light displays around my parent’s place.

This house was, by far, the most festive. So, we stopped to walk around. We had some Christmas magic here as well. The owners came out while we were walking around and brought out a gift for the boy. I guess they always head out to chat with those who took the time to stop at their house. When they saw we had a little one, they got him a gift. Colton squealed with delight to see a package with 5 Hotwheels cars in it! We didn’t stop for a gift. So, it was so amazingly Christmas-y for this family to hand out the gift.

As for the rest of Christmas…this might have been the best one of my life. To see how my boy is loved by Brooke’s family and mine made my heart full. We are truly blessed to be part of such an amazing family. Colton was spoiled this Christmas. He probably doesn’t understand why he got so much stuff in two days. He wanted to play with each present he received right after opening it. He didn’t understand that were more coming. It was quite funny to watch. Also, this Christmas, he got good at opening presents. By the time we got to my in-laws place, he wanted to open all the presents…even the one’s that weren’t his. So, we’d let him open the wrapping and then take them to whomever they belonged. He happily obliged. 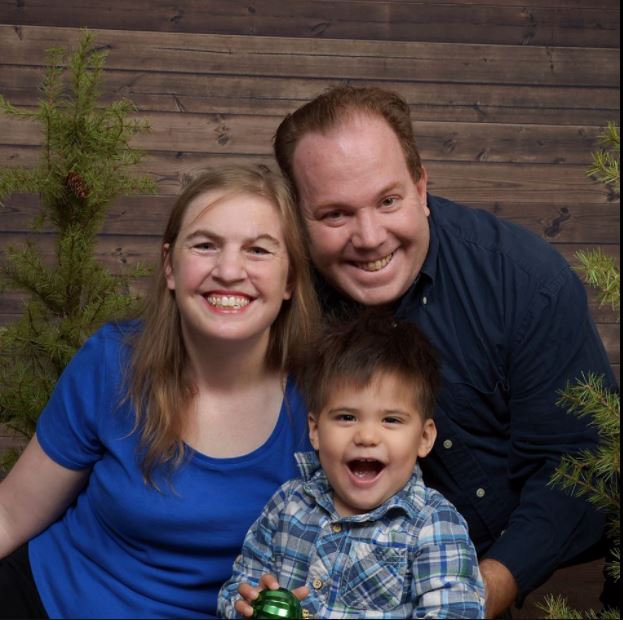 From my family to yours…Happy Holidays! I hope that you all had a wonderful Christmas, Hanukkah, Kwanzaa, or Festivus For the Rest of Us…or whatever you celebrate.

One Reply to “My Christmastime was Awesome!”