So, here’s where the course gets interesting. This path to the Angel Stadium hasn’t been used before. We left off last time on Harbor Blvd.

From Harbor Blvd, we turn right onto Katella Avenue. If you ran in the Inaugural Star Wars Half Marathon in 2015, this was the start of mile 13. In years past, they’ve run the Disneyland Half Marathon going the other way on Katella in Mile 1. So, the street isn’t unfamiliar to runDisney.

We will take Katella Ave. to West Street (Disneyland Drive if you turned right, West Street if you turn Left). When you turn, you’ll be coming close to the Mile 5 marker. West Street is one we take on the Disneyland 10K route. Much like that route, we’ll turn at the same lace to head behind the Anaheim Convention Center.

Be careful when running through this part. The course can get quite crowded. Of course, my only experience running here is at the start of mile 2 of the Disneyland 10K and 2015 Captain America 10K. So, it could have thinned out more than I’ve been used to. We’ll follow the same path back to Harbor Blvd. that the Disneyland 10K follows. Instead of turning Left on Harbor Blvd., like the Disneyland 10K does, we’ll turn right and head over some roads that runDisney hasn’t run too much before. I don’t have pictures for this part.

When we exit the Anaheim Convention Center at Harbor Blvd., I believe we will see the Toy Story Parking lot. At the Avengers Super Heroes Half Marathon, we ran through this parking lot on the way back to Disneyland. This time, we’ll follow Harbor Blvd. around the outside of the lot. Right before we get to Orangewood Ave., we’ll cross the mile 6 marker. If you want a visual of where we’re turning…there’s a Denny’s at the corner of Harbor Blvd. and Orangewood Avenue. Shortly up Orangewood Ave. is where the 10K mark will be. It looks like there’s a water station around the 10K mark.

We’ll run up Orangewood Avenue to Haster Street and turn left. I should mention this…from the time we get back onto Harbor Blvd., this is the time to make up any time lost in the theme parks. The roads will be pretty open and flat. 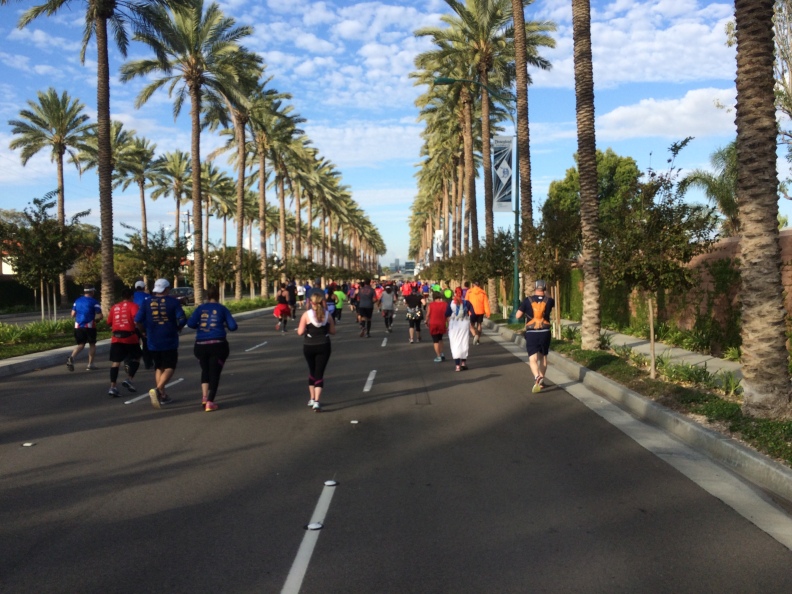 Last year, we ran the way in the picture going down Gene Autry Way. This time, we’ll turn right at Gene Autry Way and head the opposite way to take us to the stadium. Somewhere on this road, before the overpass will be the mile 7 marker.

We will be going up this overpass (instead of heading down it like last year). Once you crest the top of the overpass, you’ll see Angel Stadium! As you head down the other side, you’ll also see runners who are heading back to the finish. Once you get to the front of the stadium, you’ll see that Mile 8 marker! You’ll also be turning right and starting mile 9 running through the parking lot. Additionally, you’ll see the runners who are leaving the stadium. You’ll be there soon.

As some point we will be running through here on our tour of the Angel Stadium parking lot…hey it could be worse. We could be running the Santa Ana River Trail again!

We will likely not have this grand reception we get during the Disneyland Half Marathon.

Be careful as you head into the stadium. This slope is sometimes slippery.

We didn’t get the reception you get during the Disneyland Half Marathon.

Instead, it will be more like this. Now, to be fair, in 2015, there were 2 marching bands in the outfield. One played while the other band cheered us on. I would love it if runDisney is able to fix this. However, I wanted to prepare any newbie Avengers Half Marathon runners who have run the Disneyland Half Marathon and think that it will be exactly the same. In the first two years of Avengers, it has not. 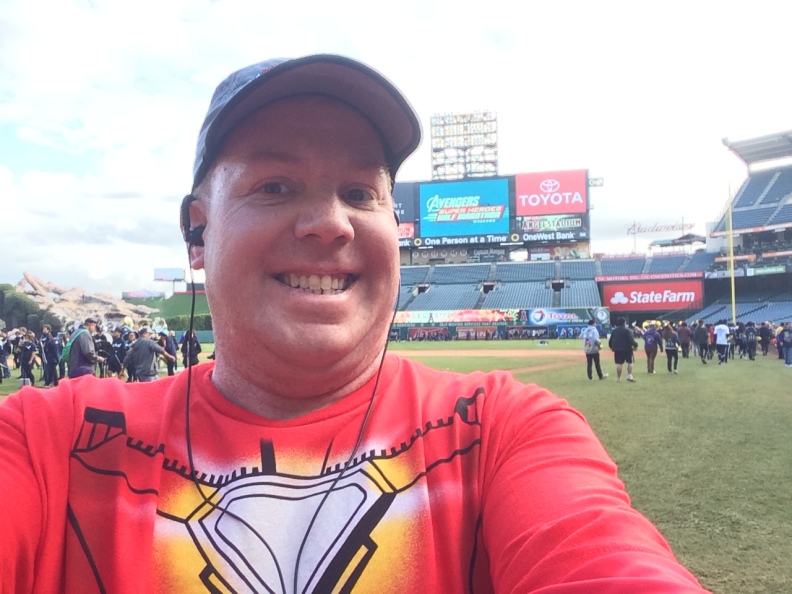 I still love running through the Big A anyways. Crowds or no crowds. I’m an Angels Baseball fan. So, it’s always cool to run through the stadium.

Keep in mind that you are running on dirt for this portion. If you want to run without worrying about stopping, stay close to the grass. Most people who will be stopping for selfies will do so closer to the seats. 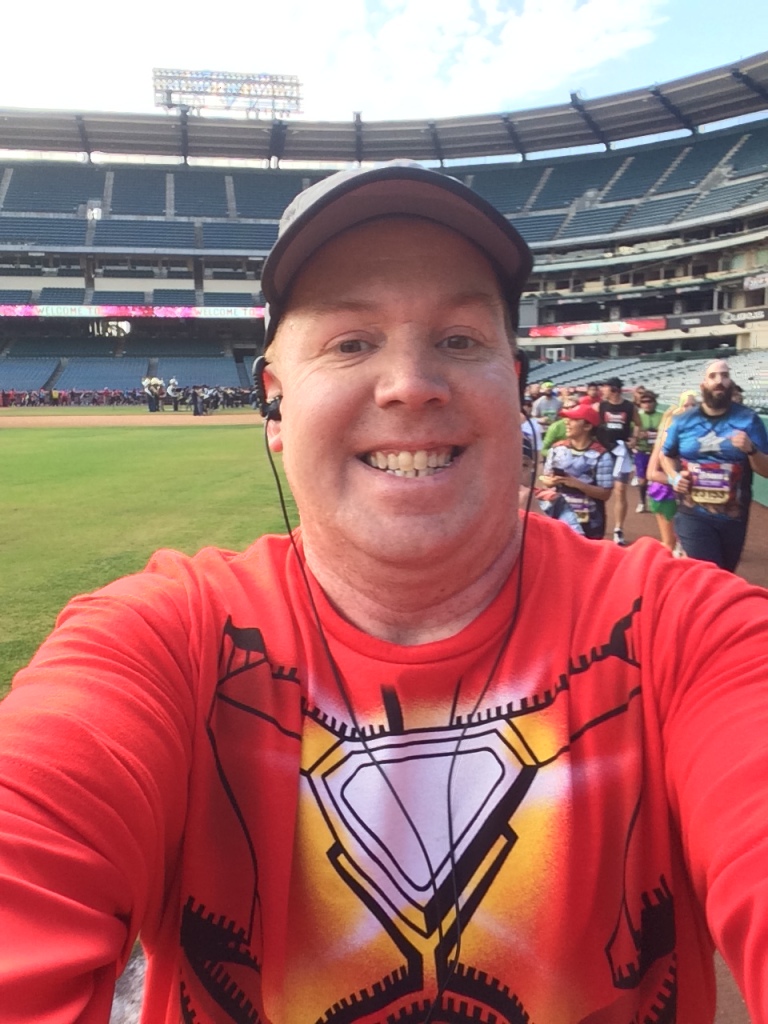 Lately, I’ve had to stop for one last selfie before exiting the stadium.

No matter how much you may want to stay in the stadium, the time will come to exit.

I think this is a good place to close this post. We’ve made it through the stadium and only have 4.1 miles left! I’ll finish off this coverage of the Avengers Super Heroes Half Marathon tomorrow, as we head to the finish line.