So, after the Disneyland Half Marathon, I had to head back to my hotel to get cleaned up and check out. I got back with enough time to throw in a half hour nap! It was heavenly. Once I got checked out, I headed over to the Toy Story Parking lot because I knew getting into the Mickey and Friends Parking Structure would be a zoo. The Toy Story Lot was a breeze to get into. The line to get on the bus to Disneyland was not. So, I walked over to the parks.

First, I headed into Disneyland and saw this fun performance with the Dapper Dans, Disneyland Band, and the Fab 5! I didn’t stick around for the entire performance. After all, it was going on before I arrived. So, I wasn’t going to see all of it. Plus, I was hungry. It was lunch time and I had a craving for some pizza. I don’t know why it was pizza. However, that’s what I wanted. So, off to Rocket Rodd’s Pizza Port in Tomorrowland I went.

While I was eating lunch, I began to plot my day. I had been up since 3:15am, ran a half marathon, and only had a half hour nap. I was also in the parks solo. That eliminated some things. I decided to find ways to get some really great pictures with my new medals. Up first? Seeing Captain America. He asked if I set any PR’s during the races. I told him that I had set a new 2nd best 10K time. That was cool with him.

Next up was meeting with Thor. He loved the new medals.

He even wanted to hold them! Yep. I started my medal tour with the Avengers!

Up next? A picture by Sleeping Beauty’s Castle of course! By the way, I don’t know why I never thought about doing this. But, those PhotoPass people take some truly amazing pictures. So, in this post is a combination of pictures taken on my phone and PhotoPass pictures that I later purchased. I LOVED this one! 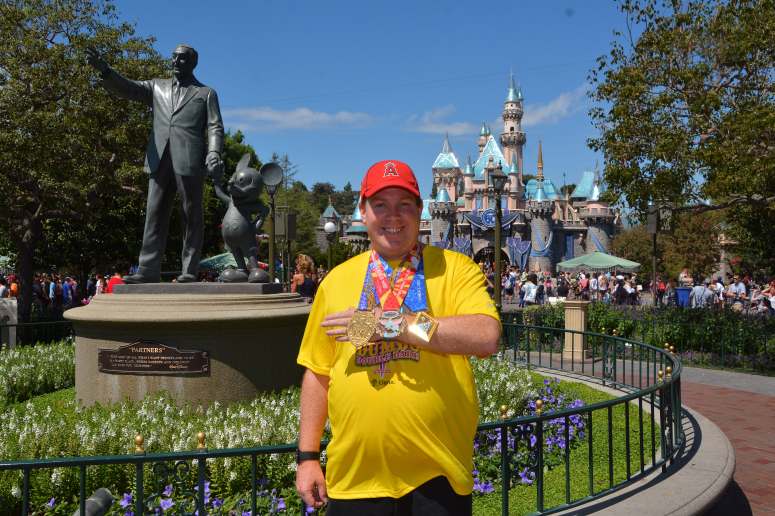 From Sleeping Beauty’s Castle, I went over to the hub for a picture with the Partner’s Statue! 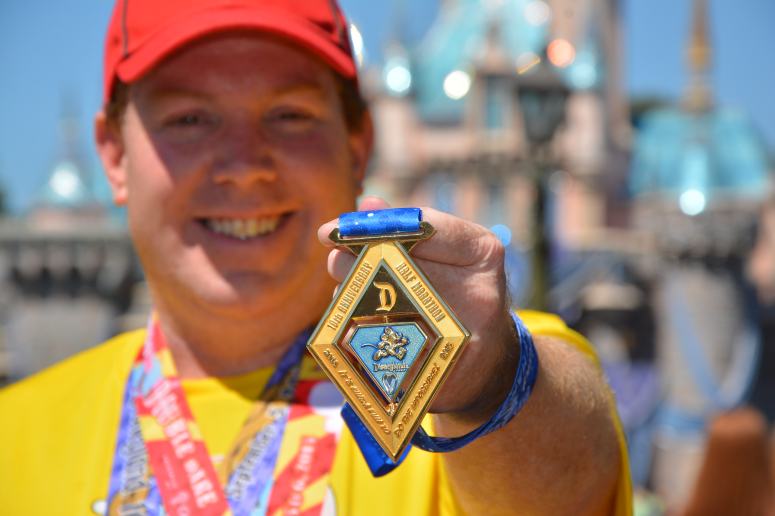 That lead to what is probably one of my favorite photos of me EVER! I saw the PhotoPass person doing this with those in front of me. He had us choose our favorite medal  to hold out in front of us. For this weekend, it was the Disneyland Half Marathon medal. 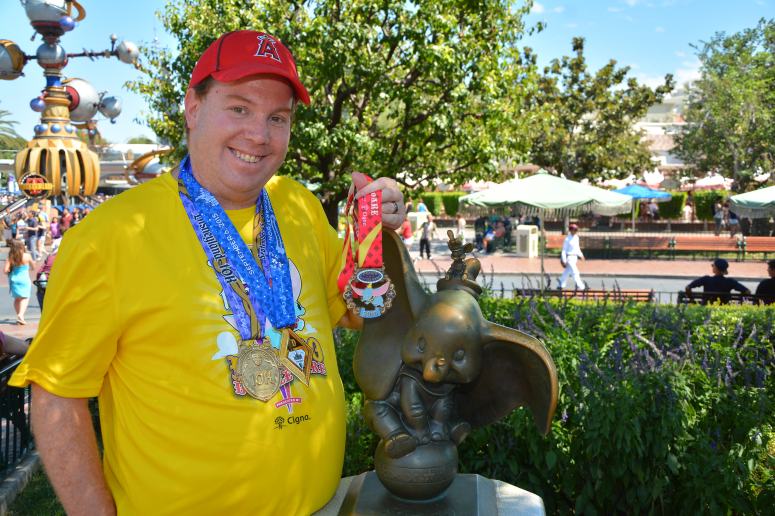 Of course, we couldn’t leave Dumbo out of the pictures. 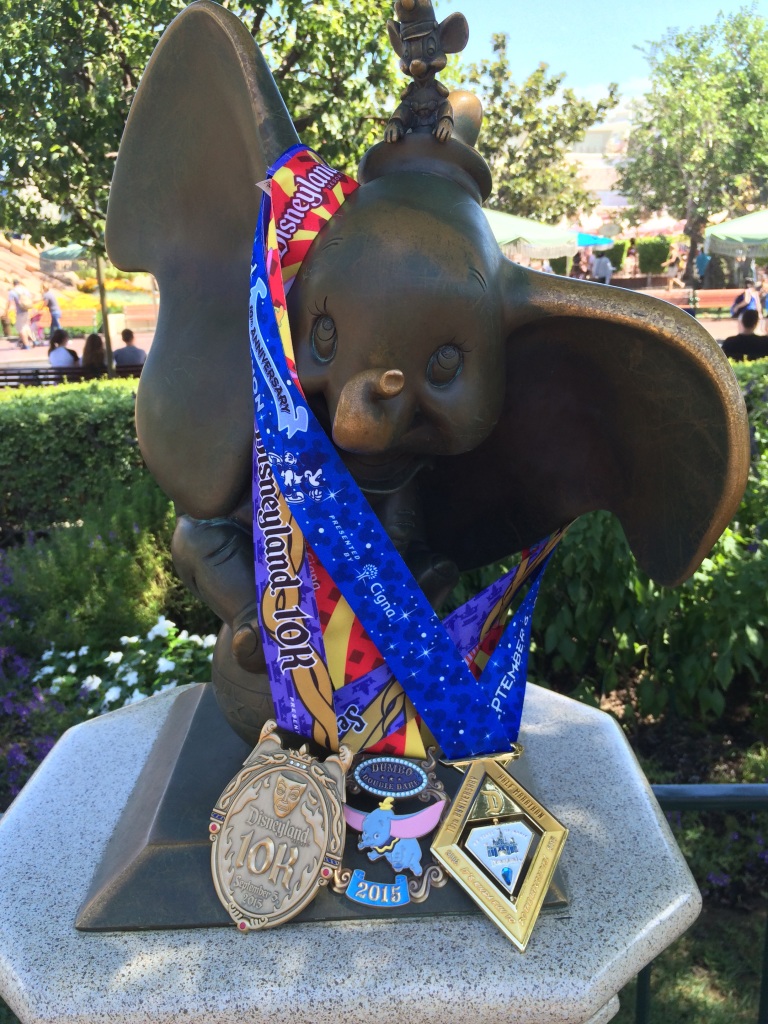 Dumbo was a busy little elephant this weekend. 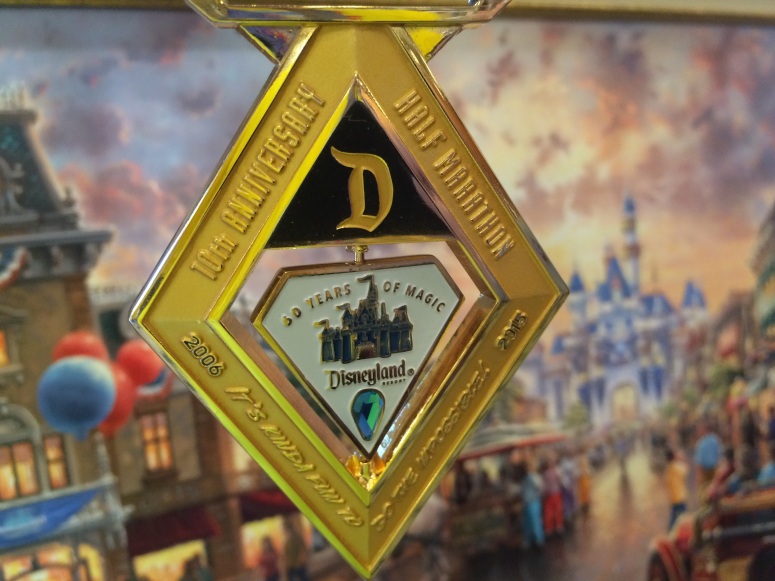 This was my first attempt at being artsy with my medal. What do you think? I had gone over to the Great Moments with Mr. Lincoln theatre to cool off. As I wandered around, I was getting fun photo ideas. This one turned out best. 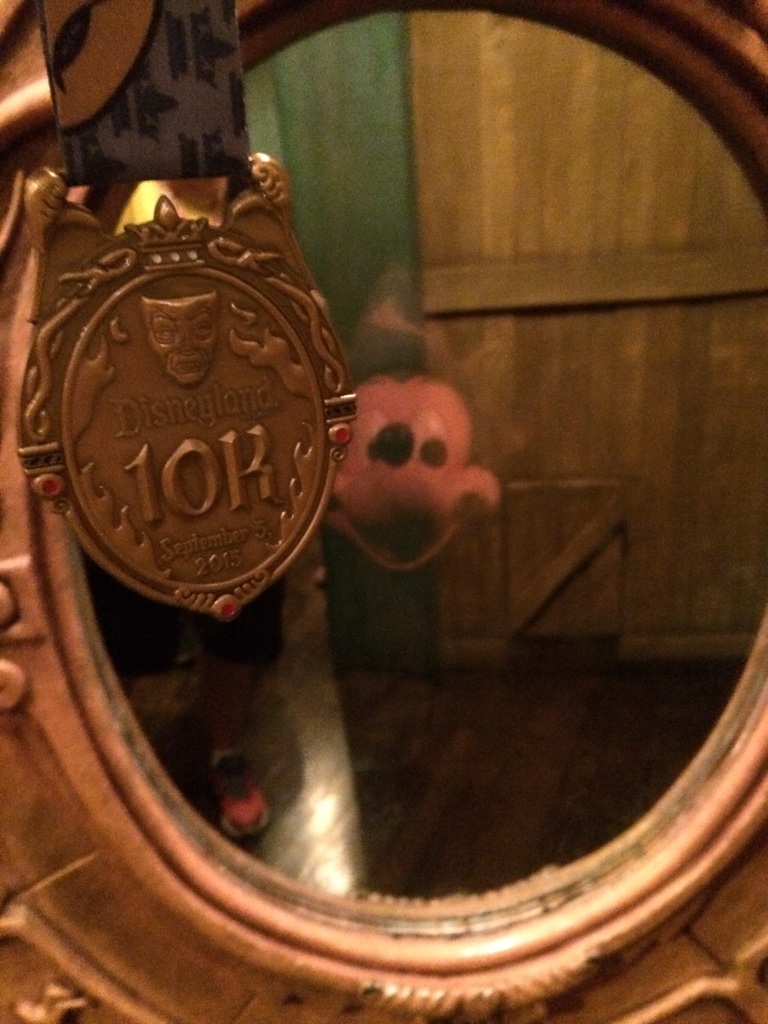 From there, I decided to head back to Mickey’s house in Toon Town. If the rumors prove to be true, I don’t know how much longer Toon Town will be here. So, I had to take advantage of an opportunity for a visit.

Mickey was happy for my running accomplishments for the weekend! He wanted to know if I won the races. It was okay with Mickey that I didn’t. I’m number 1 anyways. 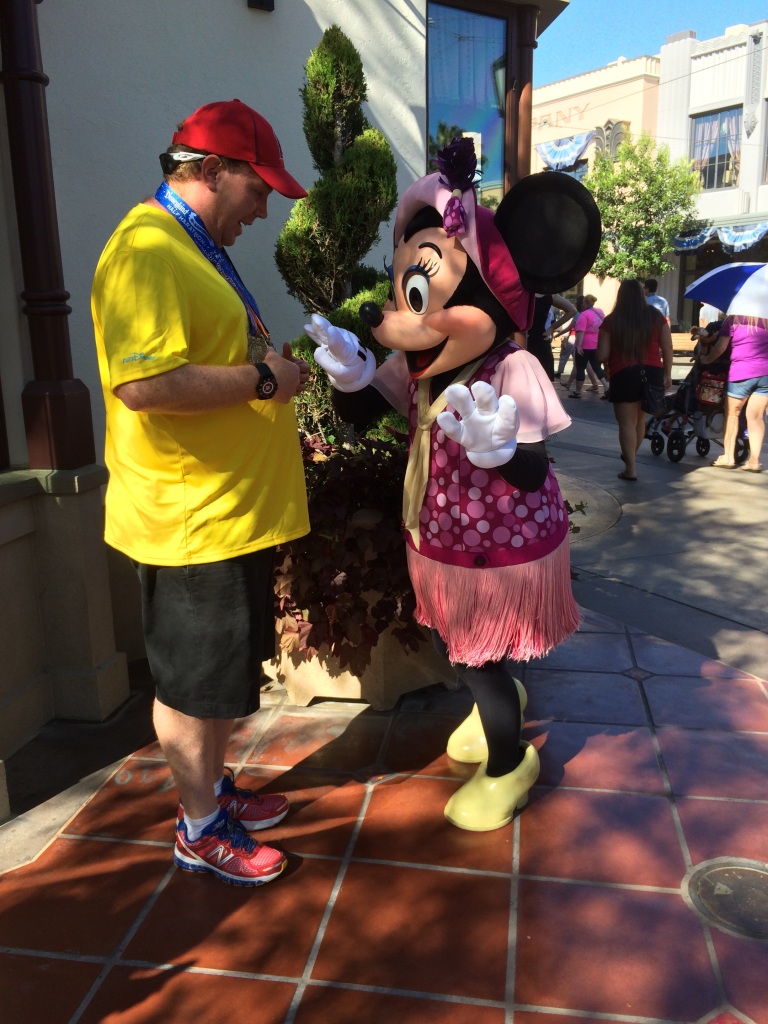 So, after hanging out with Mickey, I went off to Disney California Adventure and saw Mickey’s main squeeze…Minnie!

She also loved the medals!

Across the way was another Mickey to chat with.

He seemed to think 19.3 miles wasn’t enough and I needed to run some more!

Since I didn’t take my usual picture with the Storyteller’s Statue during the Disneyland 10K, I hopped in line to get a picture after the races.

Since I was at Disney California Adventure, I decided to take on a couple rides. Up first was the Little Mermaid.

Then, I grabbed a churro for the line at Toy Story Midway Mania! 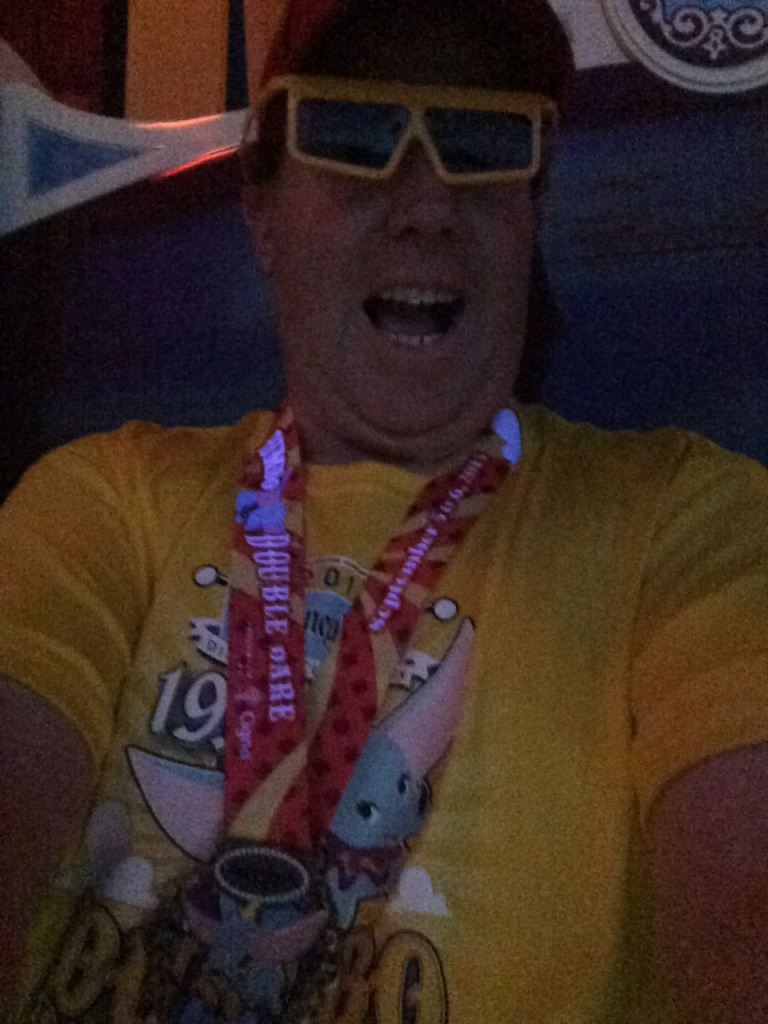 I love this ride!

Since I was the only one in my car…I won! 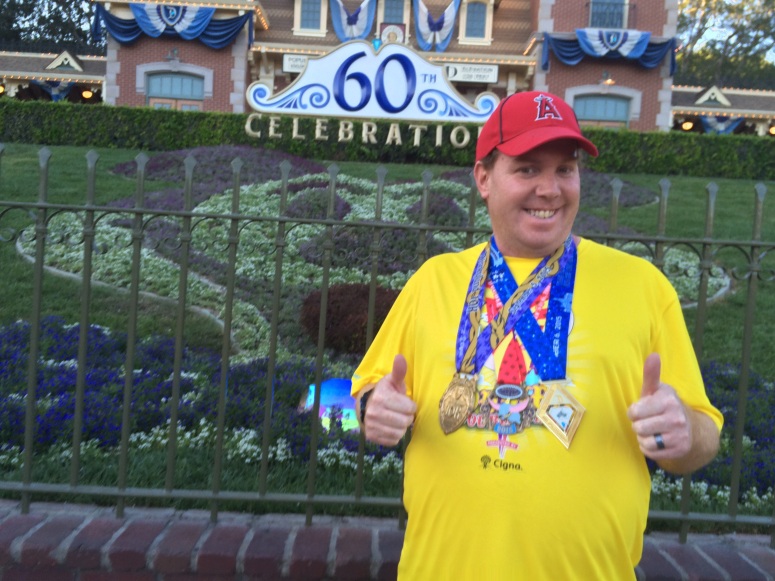 After hanging out at the Art of Animation building, I went back over to Disneyland. There was this secret goal of mine to end the day with the Paint the Night Parade and Disneyland Forever Fireworks. It seemed like the best way to end this magical weekend.

I had a corn dog for dinner at the Little Red Wagon on Main Street U.S.A. I know that I didn’t really have a true celebratory meal. But, given the time constraints and my fading energy, it worked out perfect. I got my dinner and then staked out a spot on Main Street U.S.A. for the Paint the Night Parade. It was heavenly to be able to sit for an hour or so while I waited.

If you haven’t seen the Paint the Night Parade, you must whenever you are at Disneyland next. The parade starts with Tink and Peter Pan. 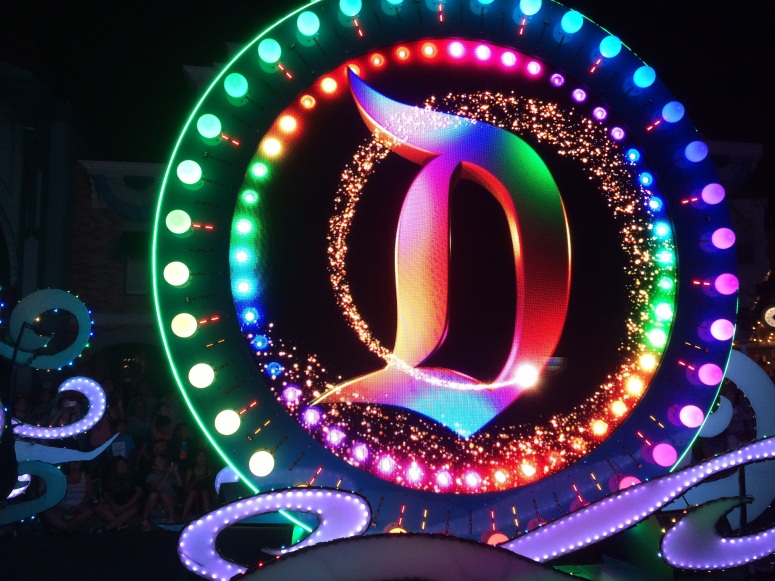 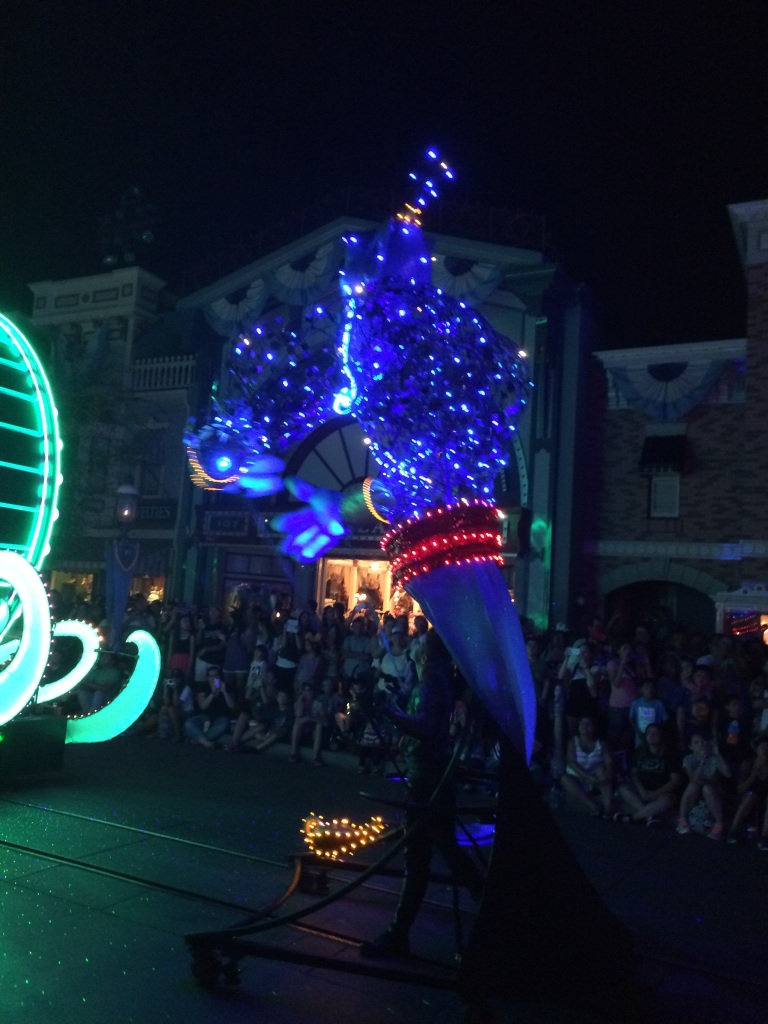 One of my favorite floats is the Monsters Inc./University float!

Lightning McQueen all lit up! 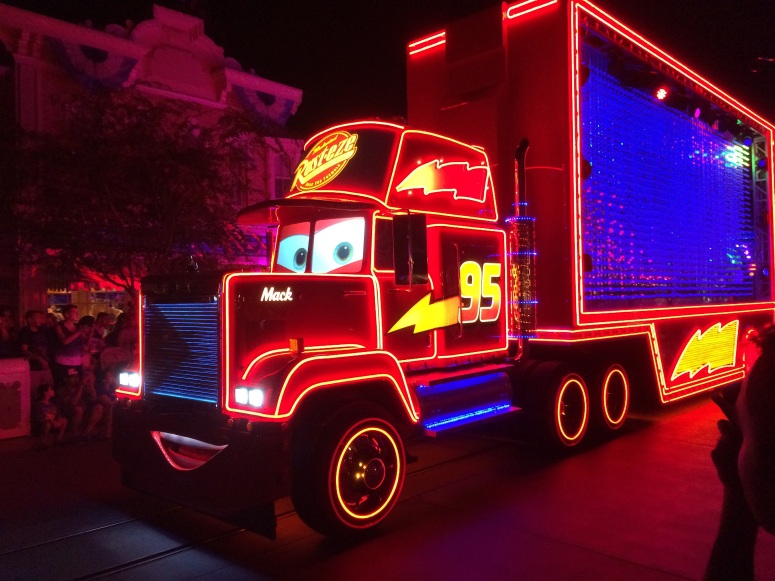 Mack might not be a float. But, he’s my favorite part of the entire parade! Soooooooo coooooool! 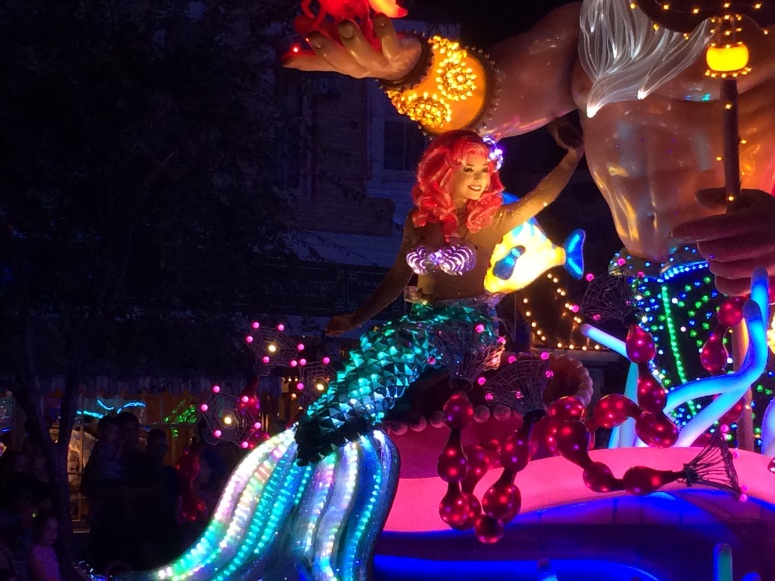 My wife loves that Ariel is part of this parade! 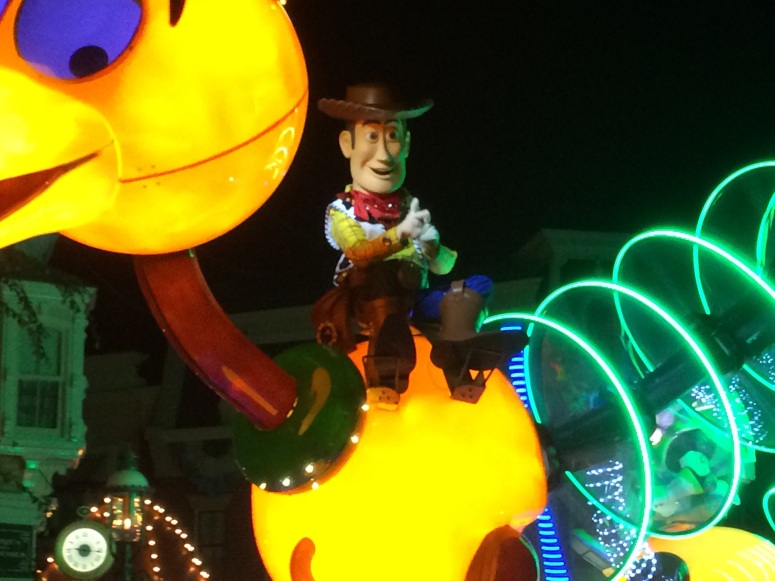 The back of Buzz. One time, I need to view this parade from the other side so I can see Buzz better.

Elsa and Anna, of course. 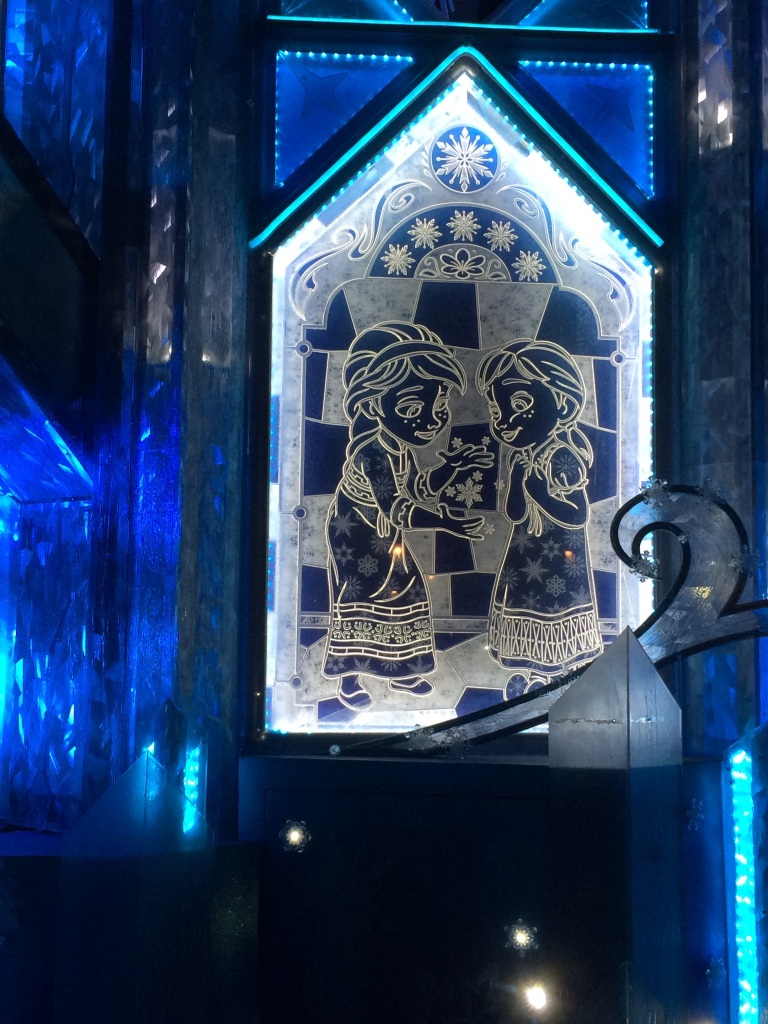 I really liked this panel from their float!

And, of course the parade closes out with the big cheese himself…Mickey Mouse! I love, love, love Paint the Night!

Once the parade was over, it was time to move onto Main Street for Disneyland Forever Fireworks!

For this fireworks show, there really isn’t a bad place to watch. 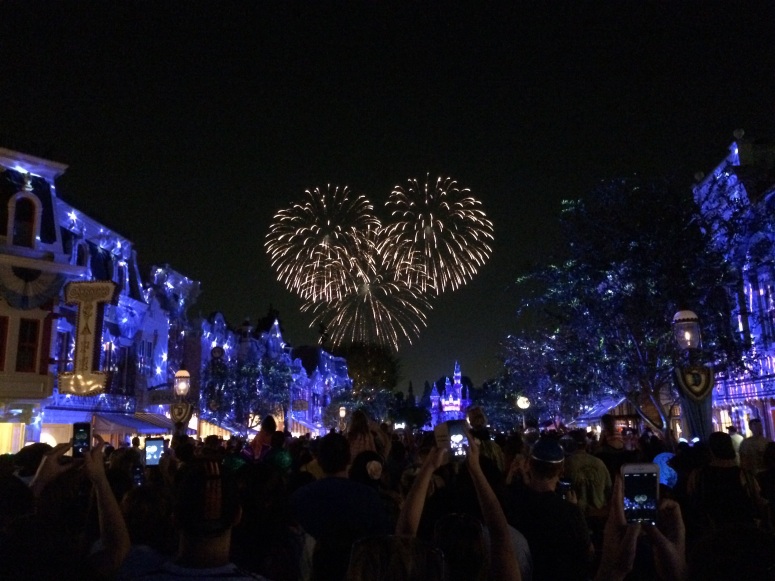 The Disneyland Forever Fireworks is a truly immersive show. That’s why I love it! 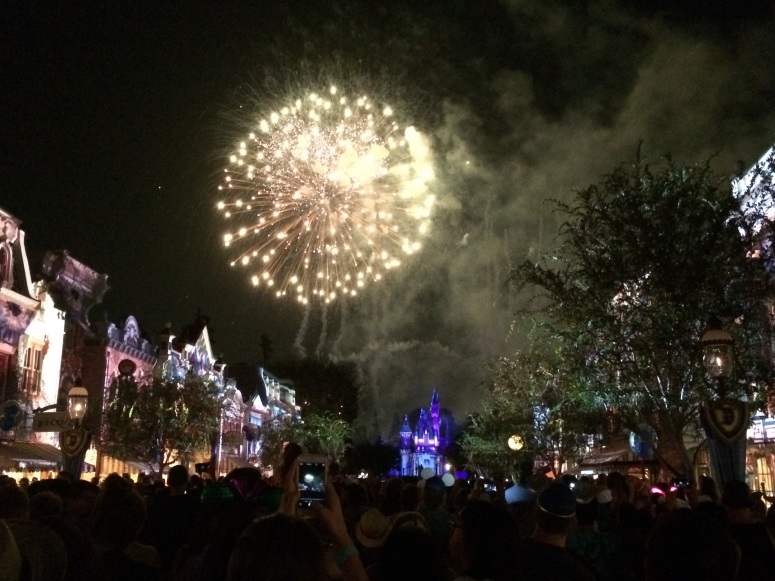 They project footage onto the buildings of Main Street U.S.A. to go with the music and fireworks. This show is a GAME CHANGER! I’m sure that other Disney parks will soon see similar immersiveness in their shows. It was a truly magical way to end this magical weekend.

In closing, I want to say this…if you run a runDisney weekend at Disneyland, make sure you visit the parks at some point in your trip. It’s a great way to celebrate your accomplishments. We spend so much money on these races, you’ve got to make sure you get your money’s worth. Secondly, consider utilizing the PhotoPass photographers at the parks. They will take photos on your camera or phone’s camera for free. However, the best shots usually come out with the PhotoPass. It’s totally worth purchasing. Just saying. I can’t wait until the Avengers Super Heroes Half Marathon Weekend! After that race, you know I’ll have to get some pics with all of my runDisney medals for the year! 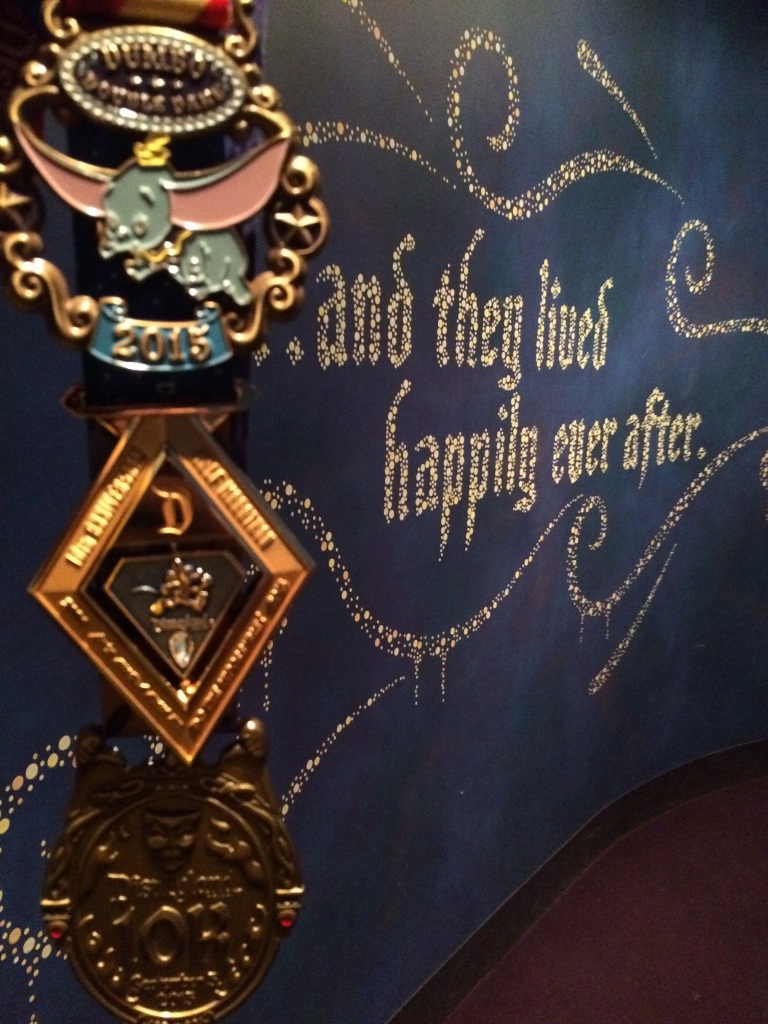