I got so bad at blogging over the last half of 2018, that I missed some pretty cool things to blog about…like a race or two that I ran. So, I’m going to use the “Throwback Thursday” posts to get caught up on races. While I can’t guarantee a post every Thursday, you should know that my Thursday posts for the time being will be either race posts or other Throwback Thursday options.

Last year, I mentioned how I had signed up for this Triple 5K Tour of LA that the folks at Conqur Endurance had put together. Since Conqur took over running the LA Marathon, they’ve done some cool stuff. Since I knew that marathoning is out of the picture right now, I can do this 5K challenge. The first race is the Santa Monica Classic (which was held back on September 9, 2018).

Like every race out there, this one started with an Expo the day before the race. Since it was in Santa Monica, the expo was outdoors. It was kind of a low key expo that shared the outside space with another event that was going on. I didn’t spend much time at the expo. The line to get my bib was simple. I was in and out pretty quickly.

Race morning was pretty exciting for me. This was only my second actual race of the year. I hadn’t run a race since April’s Angels Baseball Foundation 5K. As I drove to Santa Monica, I had no expectations for finish time. My goal was simply to see where I was at and enjoy being around other runners again.

This race featured my favorite race DJ…Rudy Nvotony. He does such a great job each and every time I’ve been at one of his races! It was fun to see him again and get caught up.

Then, it was time to get into the corrals. 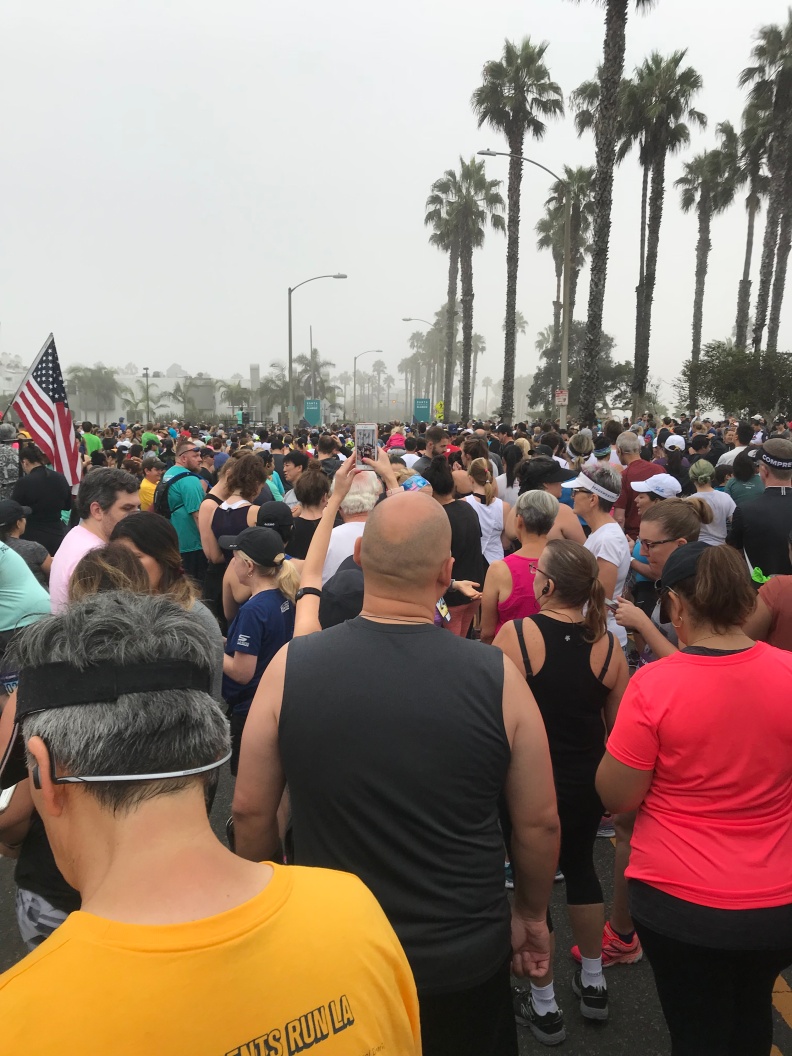 As you can see, we had quite the crowd. I had fun chatting with a few people around me. One thing that was awesome for me is that the weather was nice and cool. The fog you see in this pic stuck around for a good portion of my race!

As I waited for our turn to go, I kept thinking to myself how much I missed these races. It was while I waited for this race that I decided I needed more races in 2019. 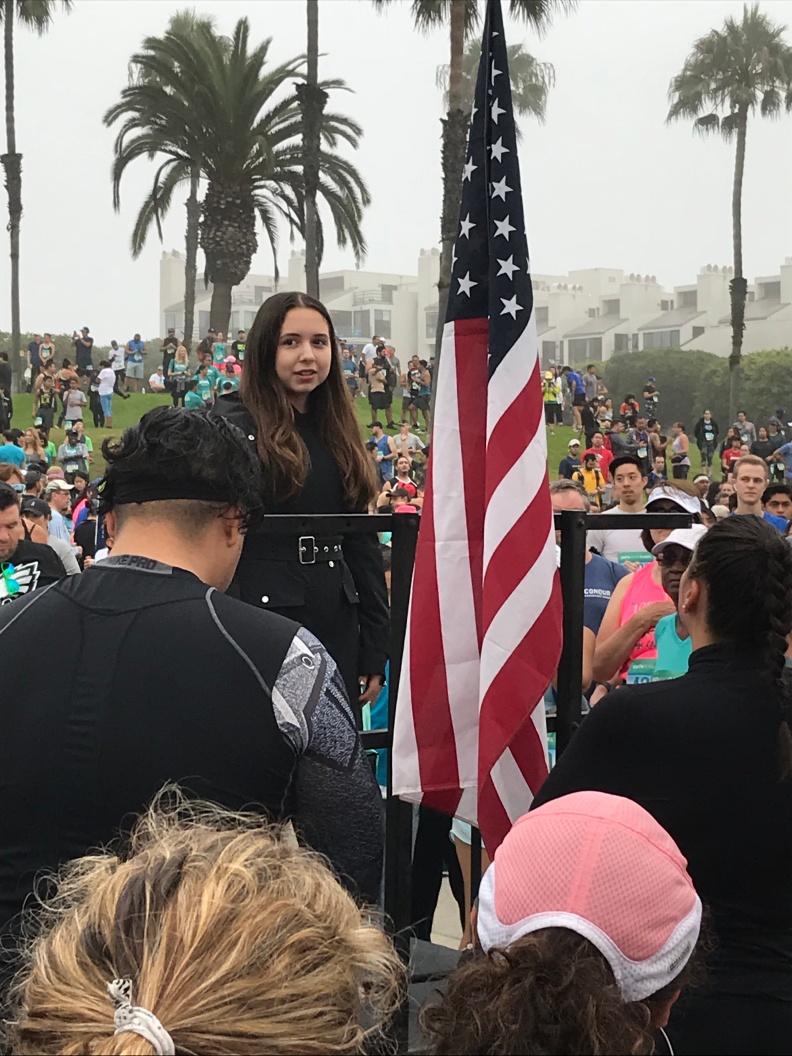 I ended up standing pretty close to the person who sang the National Anthem. However, the speakers by us didn’t work. Even thought I was close, I couldn’t her her almost at all.

Eventually, we made it to the Start Line! It was finally our turn to go.

As you can see, I’m ready to go! Here’s the thing about the Santa Monica Classic. Whether you run the 5K or the 10K, the race starts off by going up in elevation. I’ve run this race before. So, I knew that most of the first two miles would be hard. If you run the 10K, you don’t get much relief in the elevation until mile 4.

So, I started off doing my NYC Marathon intervals…run 30 seconds, walk 90 seconds. If you want to run a 5K with lots of spectators, this isn’t you race. The first couple miles have very few of them.

Mile 1 was a pretty decent mile for me. I think I finished it in around 13 minutes. That seemed like a good time for me and hopefully would help in the final two miles. Since I tend to start fast, I was happy with this first mile.

In Mile 2, my time started slipping. I knew I wasn’t going to cross that 2nd mile marker in under 26 minutes. So, I stopped off and took a quick selfie once we got back to the Santa Monica Pier. Hey, if you can’t make a great time, you might as well have fun. Right? 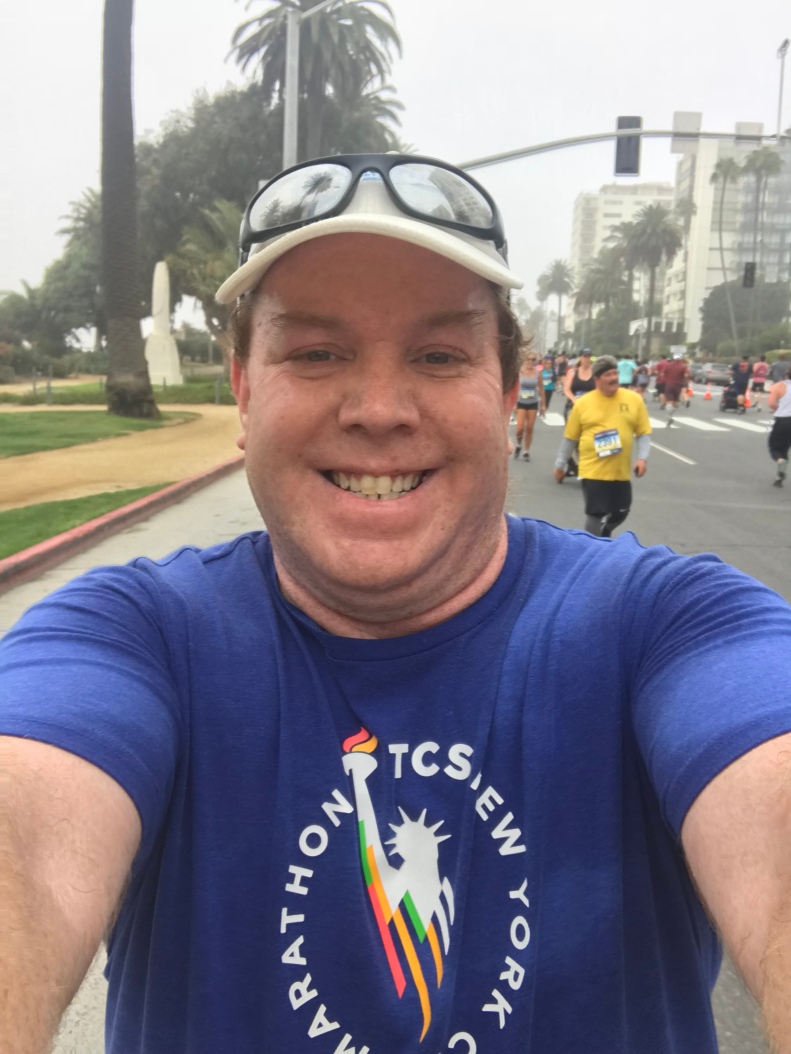 In Mile 3, I could feel the lack of training kicking in. I had hoped I could finish this race in around 40 minutes. In mile 3, it was pretty clear that I wouldn’t make that mark. I missed a few run intervals in this mile. But, was having fun. There was a guy who I kept passing on my run intervals, who would pass me on his. We got to chatting it up for a few minutes. We kept encouraging each other to keep going. That kind of helped me recover as we made the turn to head back to the finish line. I got back to the run/walk intervals and left the guy behind.

I am proud to say that I finished this race strong. My final mile might not reflect that. But, that last half mile felt really good! I finished in a time of 44 minutes, 13 seconds. By the time I got into the final straight, I was happy to have finished in under 45 minutes.

So, here’s something unique about this race. You don’t get your race shirt until after you finish. I love this idea! There’s no sea of runners wearing the same shirt for this race. Nope. After the race, there is a finish line party on the Santa Monica Pier. This is where you go to receive your race shirt (among other things). Once you enter the area, you get a bag to carry stuff you might get on the pier. When you finish the race, you only get water. However, at the festival, they have things like bagels, power bars, etc. It’s actually a really clever idea.

After eating some of the post-race goodies and hanging out at the festival, it was time to head out. I’m really glad that the Conqur Endurance Group has taken over this race. I will be back in 2019 (and probably 2020) for sure.