So, after the Abbott Dash to the Finish Line 5K, I realized that I had plenty of time to head back to my hotel, shower, change and make it to Madison Square Garden for the All Access Tour. I was feeling great after the 5K. So, I thought….why not? 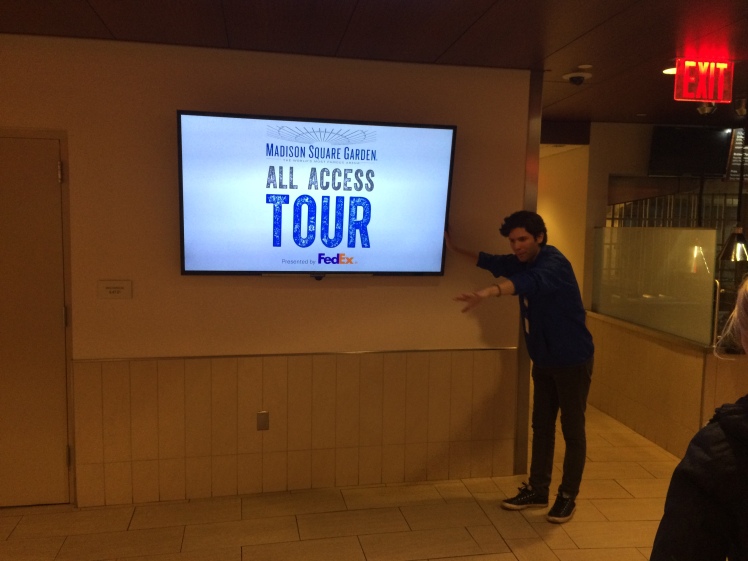 I’m so glad that I did this tour! It was so much fun!

Out tour started on the main concourse. All round this area are pictures of memorable moments that happened at Madison Square Garden over the years. It’s  not limited to sports either.

Yep. The Laker fan in me loved that Kobe was featured for his performance that set a record for most points scored at the Garden.

By the way, if you want to do a search for these moments, there’s this large touch screen for you to find your moment and where it’s located in the concourse. I love this idea!

Here’s one moment I thought was fascinating. On the night before the World Trade Center was attacked by those two airplanes, Michael Jackson gave his final public concert ever….and it was at Madison Square Garden. 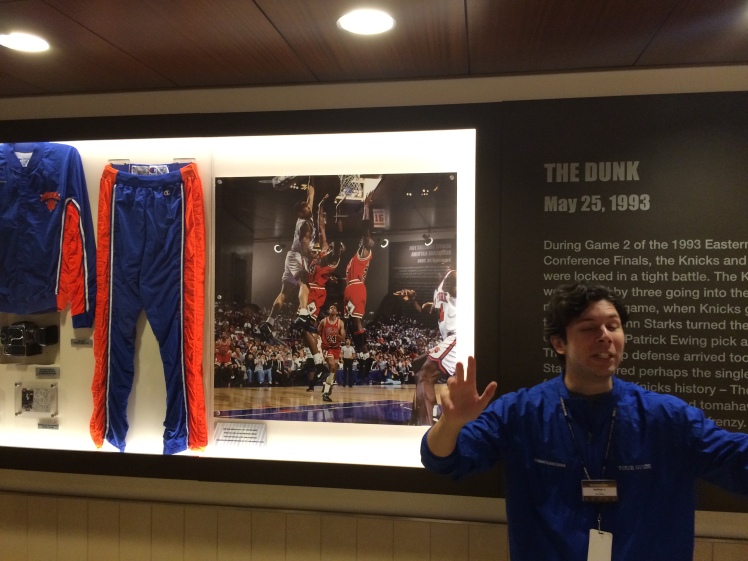 Not only do they have the small pictures, but they also have displays around the Garden of the MOST memorable moments. I remember this one. The time John Sparks dunked over Michael Jordan and Horace Grant.

So, after heading around the main concourse, we headed to the Suites.

Ahhhh, the suite life! If only I were rich enough to afford these kind of seats.

The view from the suites is pretty great.

They even have monitors in front of the front row!

Oh to dream! Madison Square Garden has a level of suites that are on the floor level as well. They aren’t like these ones because you have to walk out to your court-side seats. 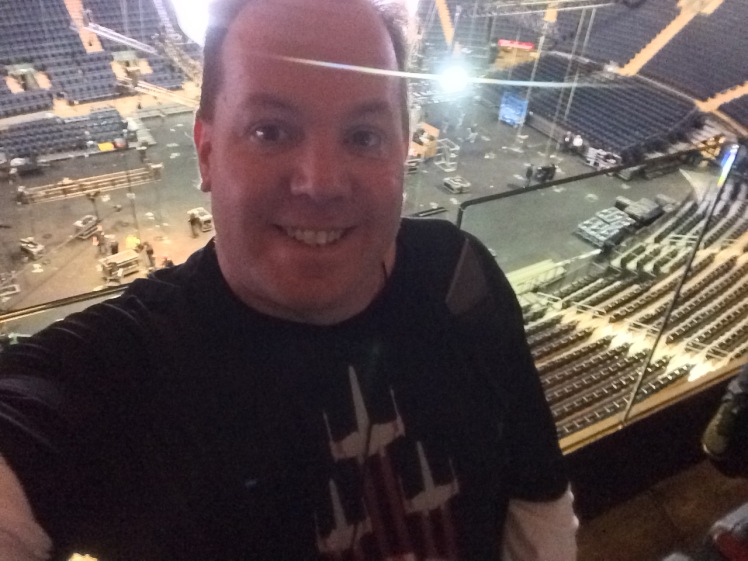 Next, we headed up to the seats on the cat walk, high above.

The tour guide called these the best seats in the house because you can see everything.

If you notice, there are seats behind me. I asked the tour guide if those seats have an obstructed view because of the seats on the cat walk. He told me that there were no obstructed view seats at the Garden. Pretty impressive!

After the cat-walk, we headed down to the locker rooms. Here’s where the NY Knicks and NY Rangers would enter the court or ice. 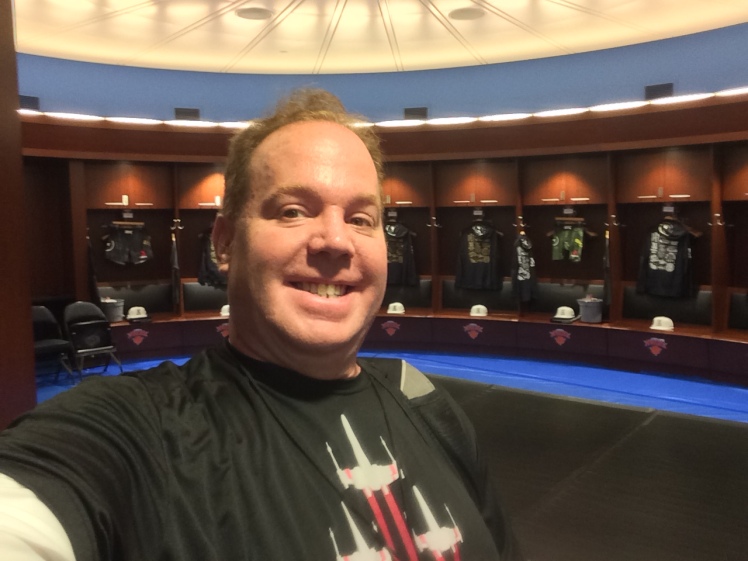 Here I am in the New York Knicks locker room!

Across the hall is the locker room for the New York Rangers hockey team.

We ended the tour with a view from the floor level seating. We couldn’t go out because they were setting up for an UFC event. But, all in all, this was a spectacular tour!

After grabbing some genuine New York Pizza, I was off on the subway to Yankee Stadium. Unfortunately, when I got to the team store for a tour, I was informed that they weren’t doing tours until Monday. Oh well. Sometimes, the best laid plans don’t work out.

Since I was there, I decided to at least walk around the stadium.

I’ve got to admit. Having a “Babe Ruth Plaza” with not Babe Ruth statue is a failure in my book. Come on Yankees. Possibly the greatest player of all time and no statue?

This looked like the main entrance gate for the stadium.

Had to take the selfie with the main Yankee logo! 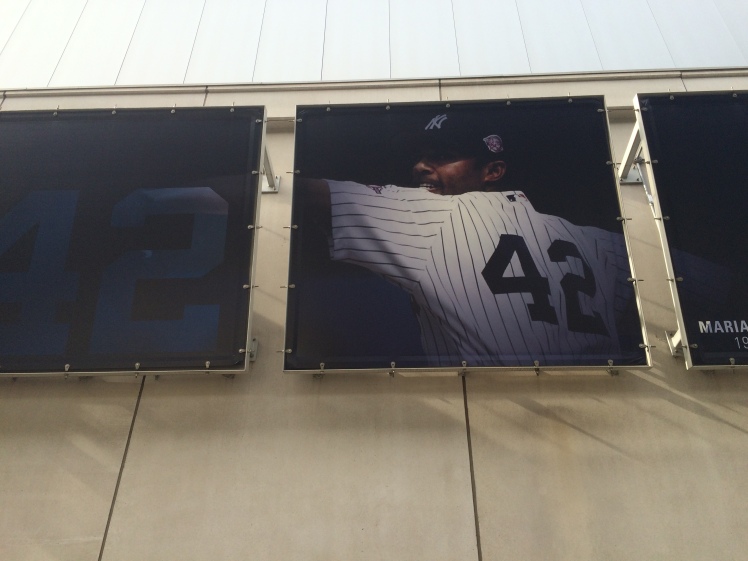 On one side of the stadium, there are displays like the one above for some of the more famous Yankee players over the years. This one is for ace closer Mariano Rivera.

Back in the Yankee Store, we got a brief glimpse into the stadium. Although, no views of the field. I may have not taken the tour I wanted, but at least I got to see what I could of this stadium. Maybe next time.

Up next was a meet-up with the NYC Marathon Runners Facebook group that helped me so much in planning my trip to the NYC. On the way, I passed the place where the Soup Nazi from Seinfeld worked!

So, I had to take a selfie. Right?

I also passed by the “Hope Sculpture.” This was all on my way to the Hyatt Midtown for the meetup.

This group was so much fun to interact with and helped me so much as I was getting ready for this trip to New York City! Even though I didn’t know them as much as I know people from the #Team Run Disney or the We Run Social groups, I learned that runners are runners.

Once we get started talking around running and our past races, it’s all good. I even met some folks that are fellow runDisney fans!

After the meet-up, I decided to head out to find Tom’s Restaurant. It’s the one that they used as the facade for Monk’s on Seinfeld. I misread my directions and realized that I should have gotten off the subway right as the doors were closing. Oh well, I got off at the next stop and realized I was just a little further up Broadway than I would have been otherwise. As I walked back, I passed by Columbia University. While this is a fantastic university on it’s own. It’s also the place where Carol Seaver of Growing Pains went to college! 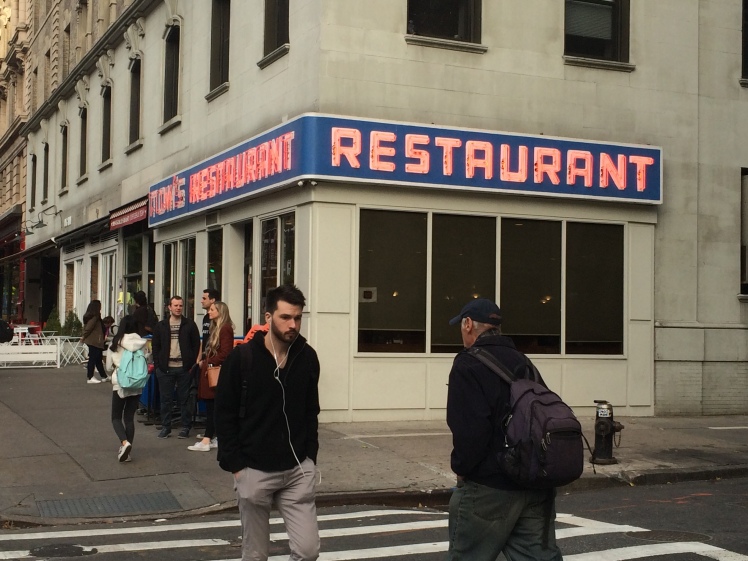 Not too far from Columbia was Tom’s Restaurant.

It was a Seinfeld kind of afternoon! After getting a couple pics, I had to decide whether to go by the Apollo Theater or not. This is where I was thinking hard about the fact that I would be running a marathon the next day. So, I opted to skip the Apollo Theater. 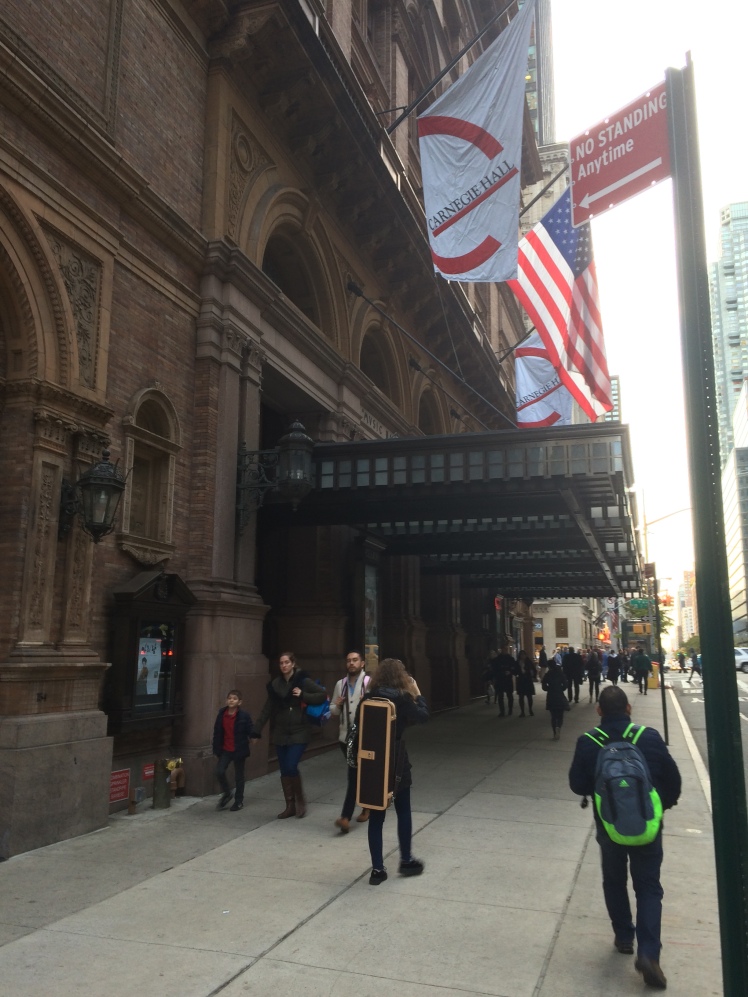 I did make my way to Carnegie Hall, though. It was sort of on the way to dinner. 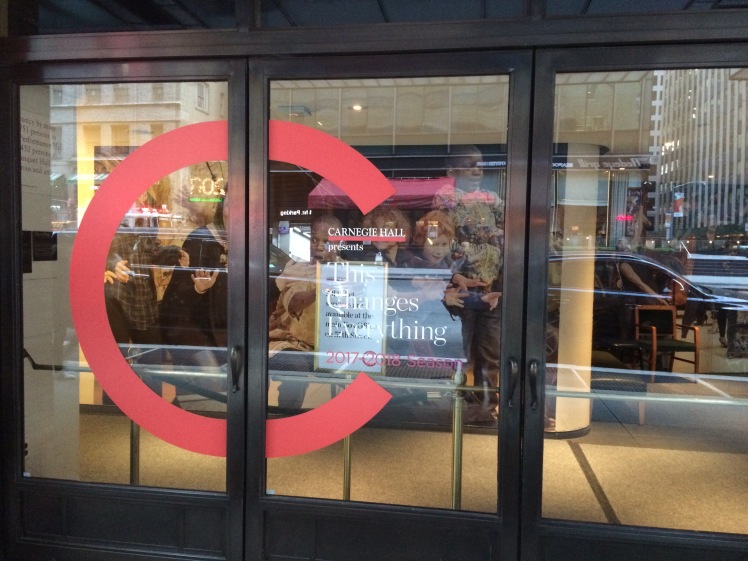 Remember when I said I was going to “sing at Carnegie Hall?” Well, the video above is that. I’ve got to admit that I felt totally weird doing this. As strangers passed by, I thought about skipping this part. But, then, I thought…why not? These strangers will never see me again. So, I launched into my song.

After singing “at” Carnegie Hall, I headed off to Ellen’s Stardust Diner for my carbo-loading spaghetti and meatballs. Ellen’s is as advertised. The entertainment was spectacular and totally fun!

This is the best video I got out of the night.

I’m kind of bummed that this video didn’t turn out better because the waiter killed it on this song from Mulan. There were some spectacular performances and some that were just good ones. I was pretty impressed to find out that Ellen’s wait staff has placed approximately 220 performers on Broadway in its history!

As for the meal itself…well, the food wasn’t the best. I had read this ahead of time. However, I thought…how can you screw up spaghetti and meatballs? Well, the meatballs were mostly cold when I got them. The spaghetti was fine. So, I skipped the meatballs and just ate as much of the spaghetti as I could. One thing I won’t complain about is the portion size. It’s more like a meal for 2. I’m sure that I could have shared my meal with the wife (is she were there) and we would have finished it. However, once I saw the plate, I knew I wasn’t going to finish the entire thing and was okay with that. I went to Ellen’s for the entertainment and I wasn’t disappointed in the entertainment at all. 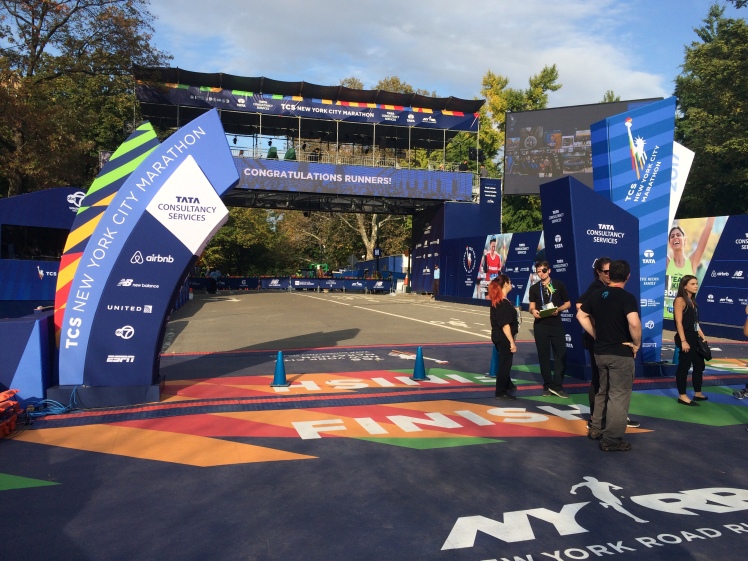 After a fun time at Ellen’s Stardust Diner, I headed back to my hotel to chill out and spend some time Facetiming my wife and boy. I got back to the hotel around 3 hours before I needed to get to sleep for the big day. I had an amazing day before the race. My hope was that the three hours in the hotel room would be enough down time to leave me ready for the big race. The finish line was calling and it was time to get some sleep.