Once you get into the NYC Marathon, the planning for the trip has just begun. One of the big concerns I had in getting ready for the race is the logistics involved in getting me to the start line. With 50,000 runners to somehow get to the start line, there is a lot of advanced planning. First, I researched to see where the various pick up spots are to get to Staten Island and Fort Wadsworth where the runners village is located. The race starts off going up the Verrazano Bridge (pictured above). So, here are the options…

One option is to take a bus to the runners village. There are two spots where buses pick up. First, is the “midtown bus” which picks runners up by the NY Public Library. The other spot is at the Meadowlands in New Jersey. The positives of taking the bus is that you only have ONE form of transportation to worry about. Hop on the bus and you can chill out until you arrive at the runners village. The downside is that you might have to leave earlier as the buses need to be across the bridge before race organizers shut down the routes to the island.

The other option is to take the Staten Island Ferry to Staten Island. Then, you have to take a bus to the runners village. The positive of taking this form of transportation is that you get to pass by the Statue of Liberty on the way to the start. Some folks call it the quintessential way to start off your NYC Marathon day. So, you get to start off with inspirational views of the city and Lady Liberty herself. Not a bad way to start the day! Additionally, I’ve read that, no matter what time you select for the ferry, you can actually adjust your time as needed. After all the ferry is running not only for the runners, but anyone else that wants to head to Staten Island. The downside is that you will be taking multiple forms of transportation to get to the runners village. So, you could start your day off walking to a subway station, taking a subway train to the Staten Island Ferry, take the ferry, then, load onto a bus to the runners village. This could cause some delays that could lead to a more stressful way to get to the start line. 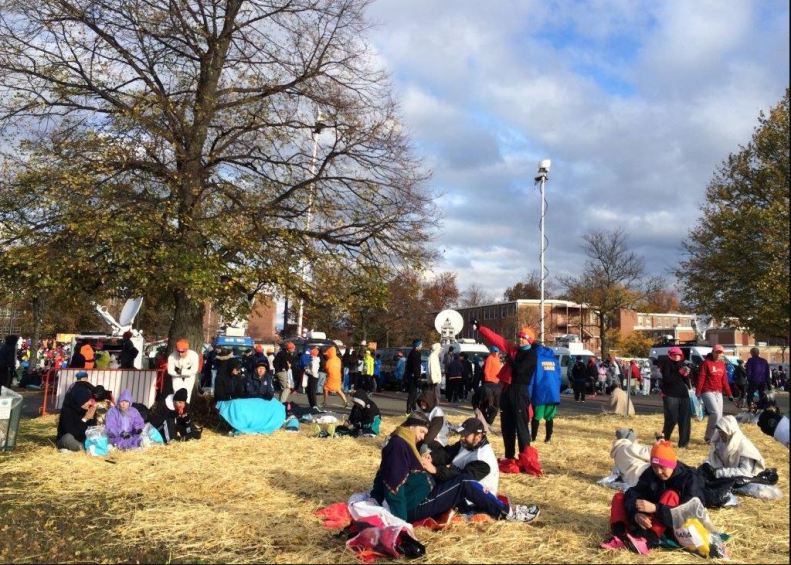 Getting to the runners village early, while it will relieve the stress of missing your start, also means you’ve got to brave the weather elements for NYC in November.

However, from this map, it’s quite a set up they’ve got going for the runners village. 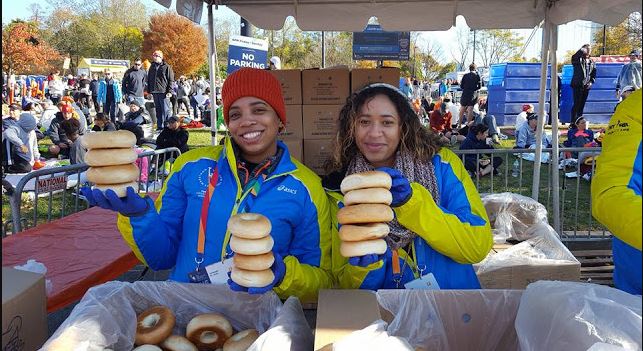 Free bagels! Also, they have Dunkin’ Donuts represented. I’ve read that you want to try and get the special beanies they give out in the village.

As you can see, I chose to take the Midtown Bus at 6:30am. The only other Midtown Bus option I had was 7am. I will likely be in the last corrals going out on marathon day. So, my group will likely not even start until 11am. The 6:30am bus will get me there early. I can only hope it’s not entirely freezing cold on race morning. If it is, I will be as prepared as I can with plenty of throw aways to keep me warm. Ultimately, for me, I liked the option of taking the bus over the ferry because I felt like there was less that could go wrong with only ONE transportation need. I know that it won’t be as inspiring. However, I’m going to be in NYC long enough to take in the sights to get plenty of inspiration. Also, I don’t want to worry about things like choppy water on race day or how long the lines are for the buses once I get on Staten Island. I’ve read some stories of folks that took the ferry and barely made it to their start time. My hotel is within walking distance of the Midtown Bus. So, that’s what I’m taking.

The other decision I needed to make was whether or not to check a bag. Currently, I’m opting not to check a bag so I can get one of these poncho’s. The more I think about this, the more I’m wavering on the decision. After all, I will likely finish around sun down (if not after). So, it might be quite cold when I finish. The main reason I have initially decided on the poncho is that you get to leave the finisher’s chute quicker than if you have a checked bag. I’ve read that the finisher’s chute can add an entire extra mile to your day if you have a checked bag. So, my thoughts are, hopefully the poncho will make up for a lack of jacket at the finish. 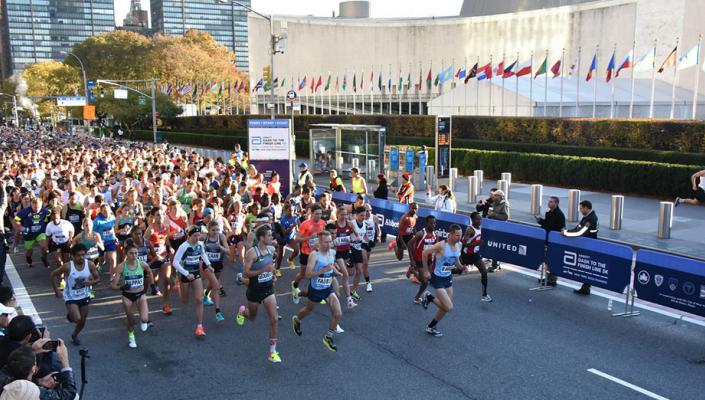 Oh, and because I thought ONE race through NYC wasn’t enough….

and because I want to run by both the United Nations and Radio City Music Hall, I signed up to run the Abbott Dash to the Finish 5K for the day before the TCS NYC Marathon! This way, I’ll get to cross the same finish line twice in two days! Yes, the 5K is expensive for a race without finishing bling (so I’ve heard). But, I mean, it’s another chance to run through the streets of NYC!

7 Replies to “NYC Marathon Transportation and Baggage Options are Set!”