Unlike the 2016 Avengers Super Heroes Half Marathon and the 2016 Disneyland 10K, I was finally coming into a race weekend that was purely for the fun of running and Star Wars. It felt good to wake up on race morning without the stress of trying to hit a particular time. I merely wanted a picture with R2-D2 and to not get swept.

It was another runDisney race. So, I was out the door at O Dark Hundred Hours like usual. I got into my corral with plenty of time to spare. For this race, I was running in the R2-D2 shirt. My boy would be BB-8 in the Kids Races later.

The wait takes forever when you’re a back of the packer, like me. However, race MC Kwame broke out some Star Wars beat boxing to keep us entertained. I still miss Rudy as our race announcer. However, the pairing of Carissa and Kwame seemed to work better than who they teamed Carissa with during the Disneyland Half Marathon Weekend races.

It wasn’t long before we made our way backstage at Disney California Adventure. For this race weekend, runDisney added these lights along the sides. Well done runDisney! I liked having them for safety. After all, it was still rather dark. 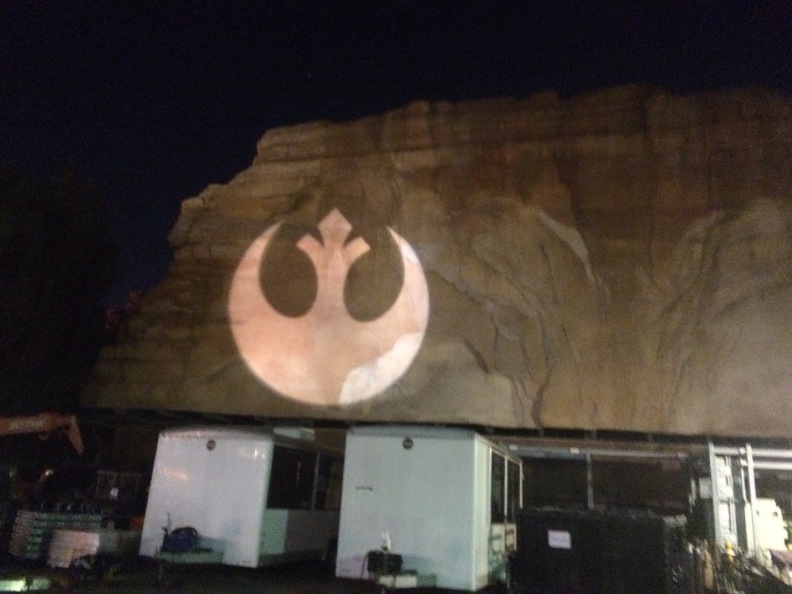 As we turned to make our way onstage at DCA, the Rebel Sign was spotted on the back side of the Radiator Springs Racers. For this beginning part of the race, I was in a run 20-25 seconds, walk 35 – 45 seconds kind of pace. The plan was to do this all the way until I came to R2-D2….wherever that may be. Then, I could slow down a bit and have fun. 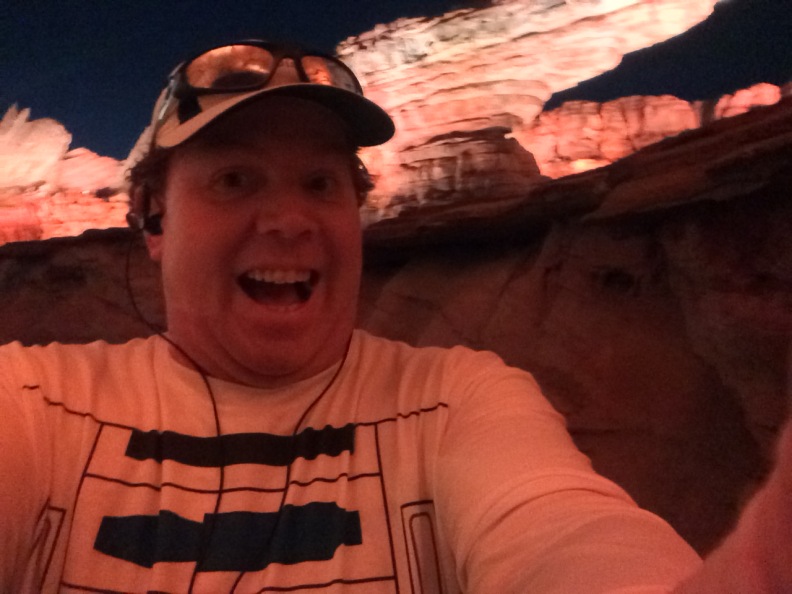 Of course, I did have to stop for this selfie. I love the Radiator Springs Racers. Running through this area is always so much fun. We made our way through the back side of Cars Land and on into It’s A Bug’s Land. From there, we made our way back to Paradise Bay.

Right near the other side of Cars Land, the first character stop was spotted. It was C-3PO and R2-D2! The line looked a little long. But, this was the ONE pic I wanted. So, I took the risk and waited. They told us the line was around 15 – 17 minutes. However, I was in line for more than 20 minutes. While I was in line, I learned where BB-8 was located….in front of the Team Disney Anaheim building backstage Disneyland. I knew I needed to keep to the same intervals and hope for the best.

Even though I really wanted the pic with BB-8, I still had to have fun. So, a stop with the World of Color fountains was a must!

I don’t think I’ve ever made it to the fountains while it was still this dark out before! I loved every moment of it! 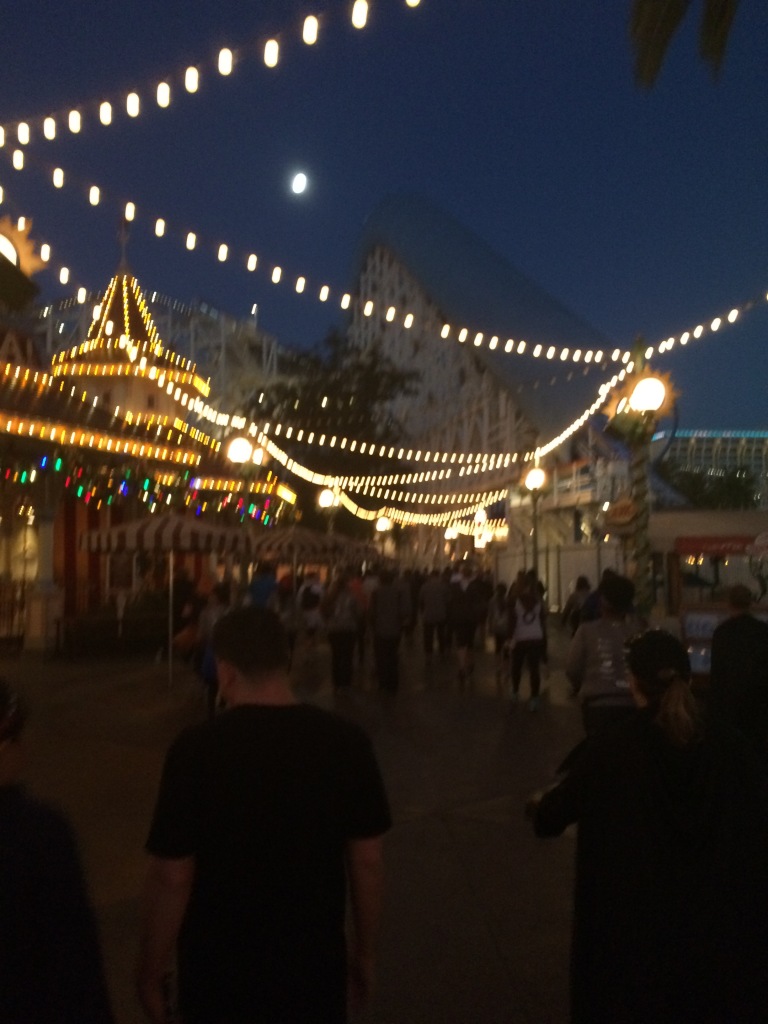 We went up towards and past Ariel’s Grotto, Screemin’, and Toy Story Midway Mania…

Look! The back side of the World of Color fountains! Since I was on a walk break, I decided this pic needed to happen.

We made our way around Paradise Bay, past the Little Mermaid ride and towards the Grizzly River Peak area. I’m not a huge fan of this path because it’s so narrow. Running seemed pointless until we got to the Condor Flats area by Soarin’ Over California. Then, it opened up enough. On a walk break, I went past the Carthay Circle Restaurant. It looked amazing at this time of the morning! So, I had to grab a quick picture.

We made our way down Hollywood Land. This is one of my favorite places to run at DCA!

We turned at the Hyperion Theatre and made our way to the (now closed) Tower of Terror. It was kind of sad to see the ride building under tarps. However, as we got closer, there were some Storm Troopers and Jedi Padawans having a confrontation. I don’t think I’ve ever seen the actors playing out scenes on a runDisney race course before. I absolutely loved it! 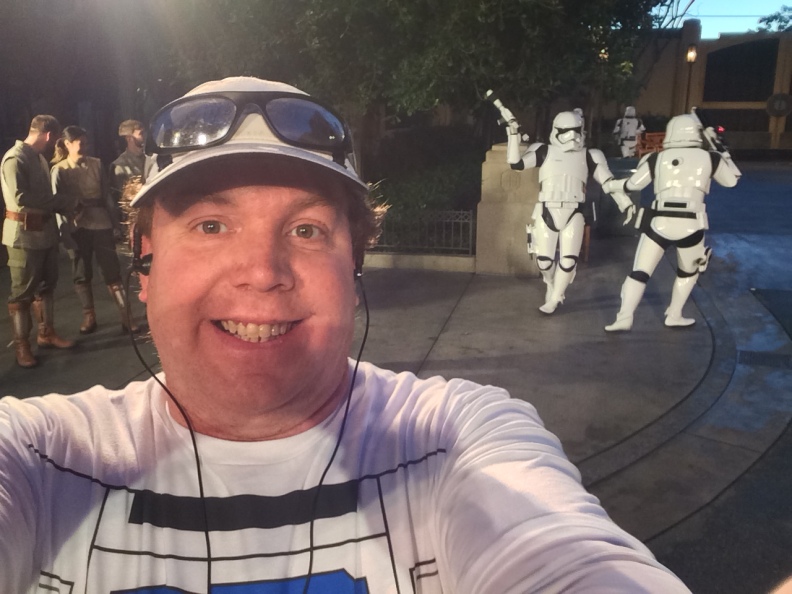 Yes, I had to stop for a quick selfie! We made our way backstage at DCA and headed towards Disneyland. We ran down that famous (to runDisney runners) tunnel that connects backstage DCA and backstage Disneyland. There was a fun laser light show going on. The Disney Cast Members were even playing along! By this point, I had slowed a little to run 25 seconds, walk 95 seconds. It was getting a little crowded. So, I started these intervals because I couldn’t run at the top of every minute.

The Disney Cast Members were warning that this line was around 40 minutes long and we might get swept if we stayed in the line. They had mentioned that the balloon ladies had crossed mile 1. Then, a few minutes later, they announced they had crossed mile 2 (we were at the end of mile 3). It was a nervous time to be in line. My thought was that, if the balloon ladies got within sight, I’d see where I was in line. If I wasn’t really close to the front, I’d bail on the line. After all, I know I can run faster than 16 minute miles. So, I’d be able to finish the race. Fortunately, by the time I got to the front, there were no balloon ladies in sight! The line did take around 25 minutes to get through. Totally worth it! By far, this is my favorite picture of the entire race!

Without the balloon ladies in sight, and being backstage Disneyland, I went to my run 20 seconds, walk 40 seconds. I knew I could always make stops for pics like this one in Toontown as long as the balloon ladies didn’t catch up. 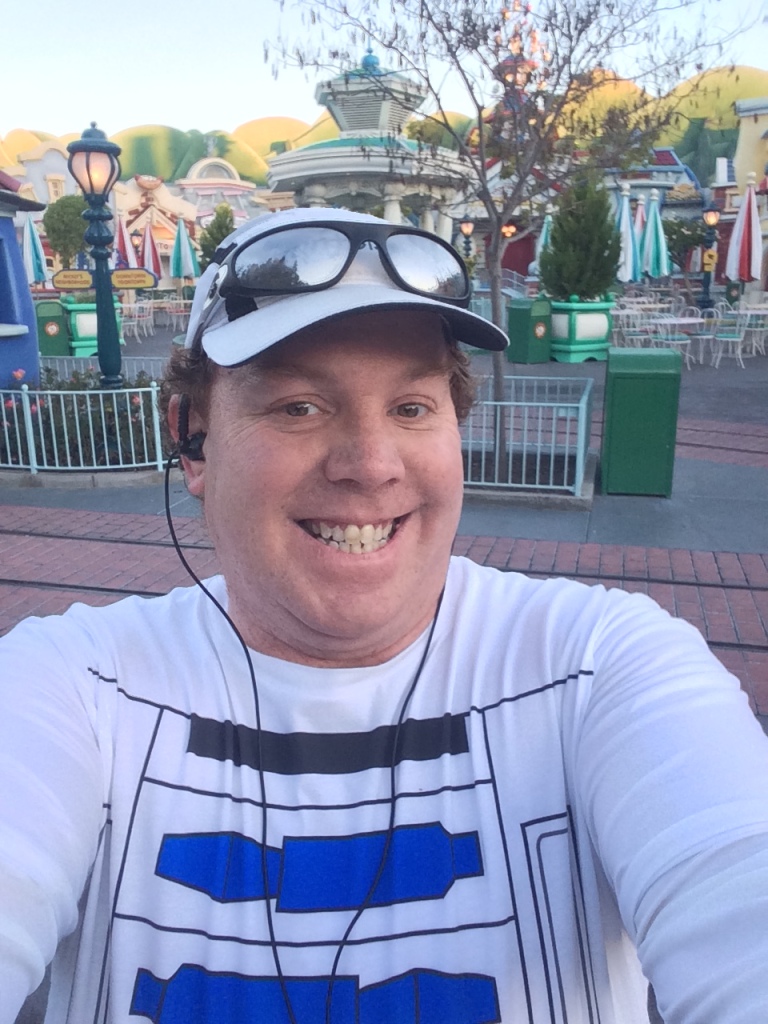 Toontown is another fun place to run in these runDisney races!

Unfortunately, in the pictures I took, you cannot see the Christmas lights on It’s A Small World. They were lit up. However, in the sunlight, you can’t see them very well. I saw them as I passed by.

By the time I got to Kylo Ren, they had shut off the line which was a bummer. I’m not too fond of those Disney Cast Members that shoo you away when trying to take a selfie. Especially, when you get off the coned off race path to do so. If you’re going to cut off the line, at least let us get selfies. You know what I mean? 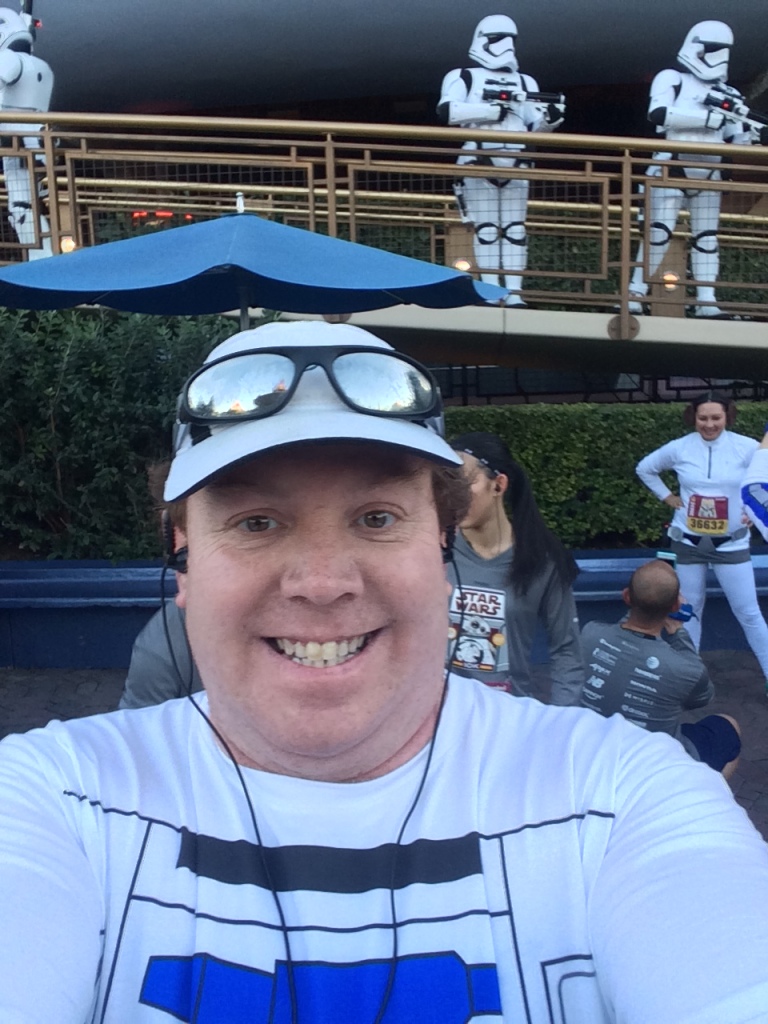 We made our way back to the Star Wars Launch Bay where there were more Storm Troopers. As you can see behind me, there were lots of us getting selfies here! 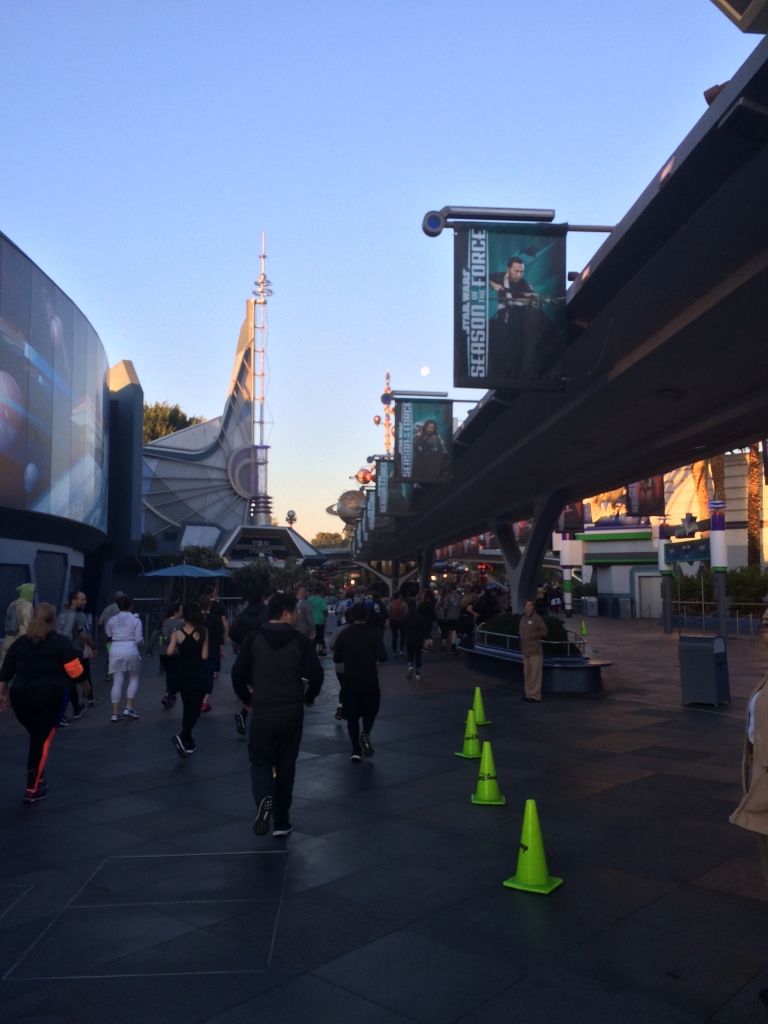 The route headed back to Main Street U.S.A. through Tomorrowland (which still had Season of the Force banners up…Rogue One banners!).

Once we got to Main Street U.S.A., it was a quick right and up into Fantasyland and back through Sleeping Beauty’s Castle. From the time we got past the Tea Cups, the room to run filled up rather quickly. By the time I got to Sleeping Beauty’s Castle, all I could do is walk. There was simply no room to run. Once I got this picture, it was time to go to a run 25 seconds, walk 95 seconds. 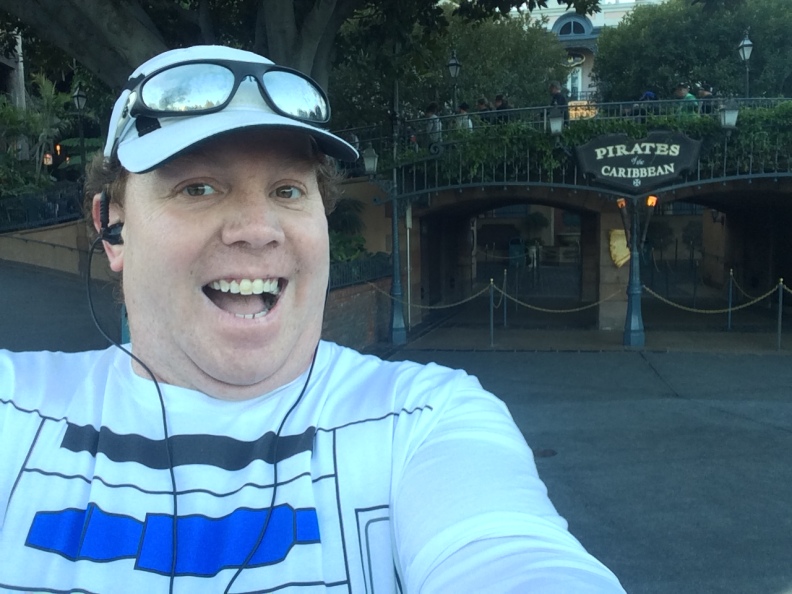 The course continued along the Rivers of America until we got to the Haunted Mansion, which still had Jack Skellington up from the Nightmare Before Christmas overlay. From there we turned around and headed back to Adventureland. By the time we got over the bridge next to Pirates, I saw the Death Star balloon ladies starting along the Rivers of America. This caused a quick panic on my part. I had no idea they were so close.

I went back to a run 20, walk 40 seconds for the rest of the race to make sure those Death Star balloons didn’t catch me. On a walk break, I was still able to get this quick pic coming up Main Street U.S.A.!

As we approached the Main Street train station, I noticed Captain Phasma roaming around. I didn’t have much time. But, I got this quick pic. 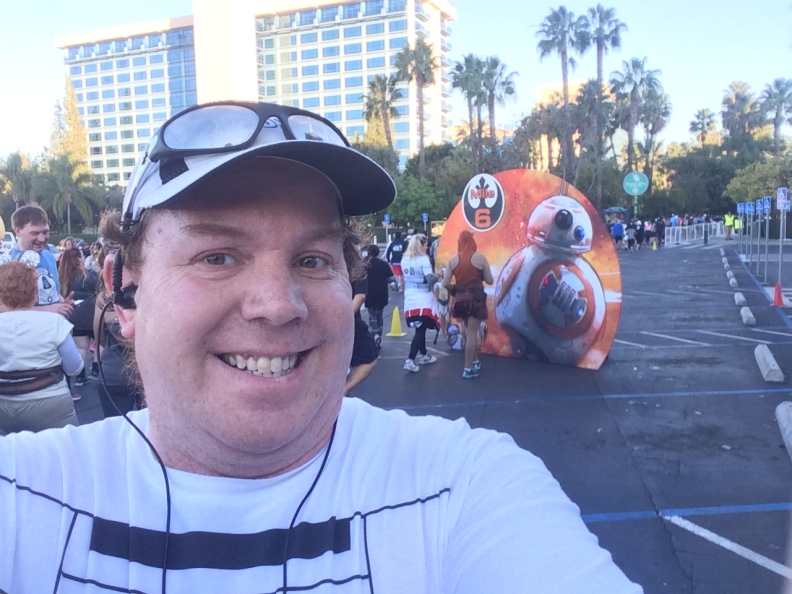 We made our way out of Disneyland and to the backstage area of DCA again where we’d get to that final stretch of this 10K. I was pretty much cruising with my run 20 seconds, walk 40 seconds all the way until we left the backstage area of DCA and crossed into the Paradise Pier Hotel parking lot. From there, it was the typical finish for the half marathon courses. I knew, once I got to the parking lot that I was not going to get swept. Not that I was worried. However, I could put it on cruise control for the last half mile. I loved the Mile 6 marker!

Ah, the finish line! I always like seeing that!

….and….finished! Part 1 of the Rebel Challenge was officially in the books! 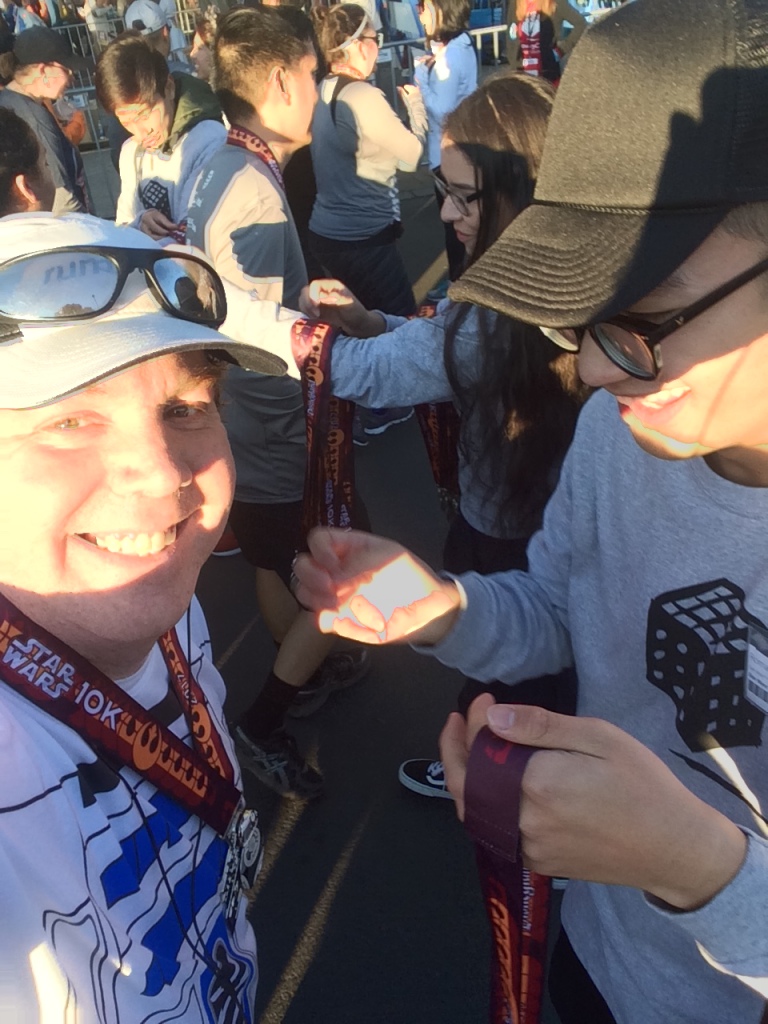 The guy giving me my medal thought it was funny that I wanted to grab a selfie of me getting the medal. Too funny! 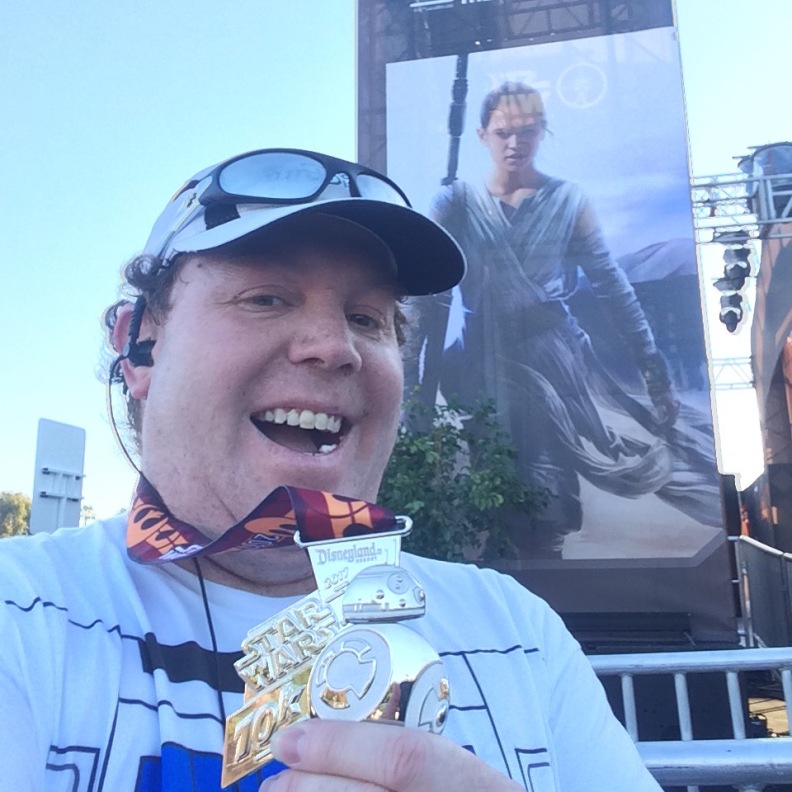 Check out this new medal to my collection! I absolutely LOVE, LOVE, LOVE my BB-8 medal!

This was by far my slowest 10K ever! However, at least I got negative splits! I’m not bummed at all about this slow time. After all, my only goal for the race was to have fun…and fun I had! I got the pic with BB-8 that I skipped out on last year and got the pic with C-3PO and R2-D2 as well!