So, after falling flat on the first of my 3 goal races leading up to the 2017 TCS New York City Marathon, I needed a break. I needed to take some time to regroup and figure out how not to have this happen again at the 2017 Sketchers Los Angeles Marathon. I simply cannot have this same lower calf twinge problem happen in mile 9 of a marathon. If that happens, I’ll have to quit the race. I will not walk the final 17.2 miles of a marathon. That’s not going to happen. Fortunately, not only did I need a break, but I had a busy week after the Avengers Half Marathon. So, rather than a workout recap, this will be a recap of all the fun from the week after Avengers.

The night after Avengers was my favorite rehearsal in the Candlelight season. For most of the rehearsals, the Disney Employee Choir meets in two locations…one in Glendale and one at the Disneyland Resort. However, we get to come together for one rehearsal which we call the “combined” rehearsal. I know…not terribly creative. However, this is my favorite because it’s just us all together. We end by running through the entire Candlelight program. Of course, I like to record some of it. Above is us singing “Away in a Manger.”

Since I can’t just post a video of the ladies singing without the guys, I also recorded us singing “We Three Kings” so you can hear all 300 of us and a song that features the guys. This rehearsal did not disappoint. It was everything that all the previous combined rehearsals were. I left wishing that the rehearsal could just continue on forever! Candlelight at Disneyland is the first weekend of December. I can’t wait!

On Wednesday, Brooke and I took Colton to the Disneyland Resort for the very first time! We spent a few hours in DCA…. 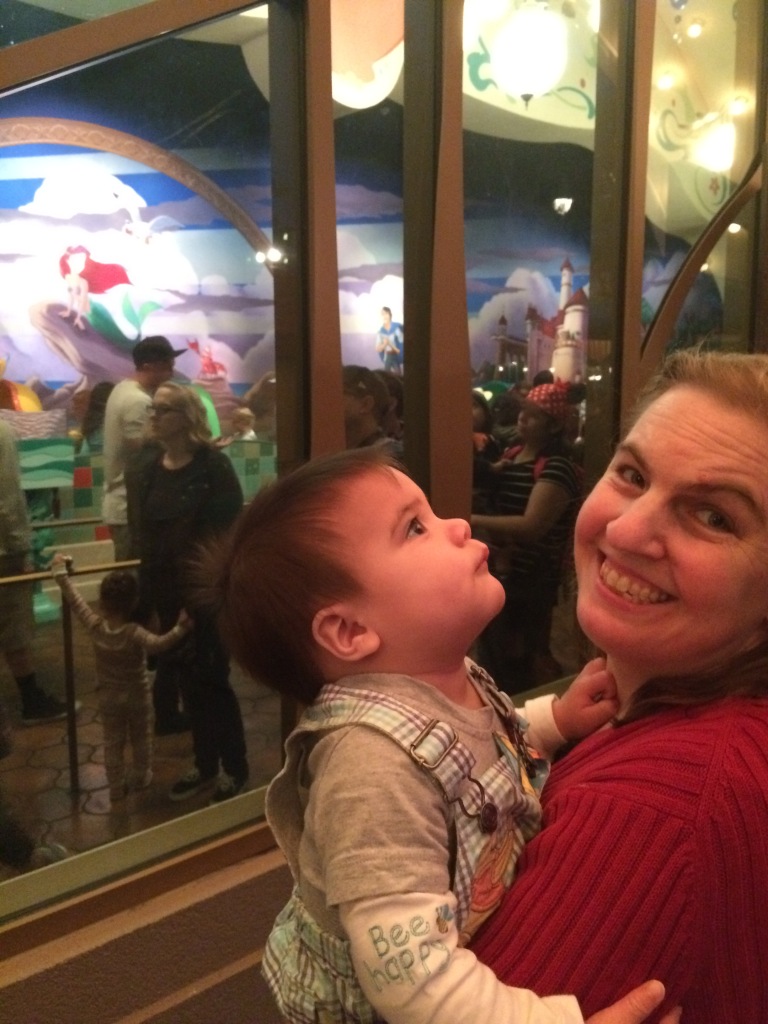 For those interested, Colton’s first ride ever was the Little Mermaid: Ariel’s Undersea Adventure. I think this picture captures how he handled the whole experience at Disneyland and DCA. He could not stop looking around and taking it all in. Most of the time, his expression was like…What is this place? It’s amazing! I loved watching him experience my favorite place on the planet for the first time. We took him on on King Triton’s Carousel and King Arthur’s Carousel in Fantasyland. We wanted to take him on It’s A Small World. However, they were taping the Holiday Special that will air on Thanksgiving night by It’s A Small World that night. 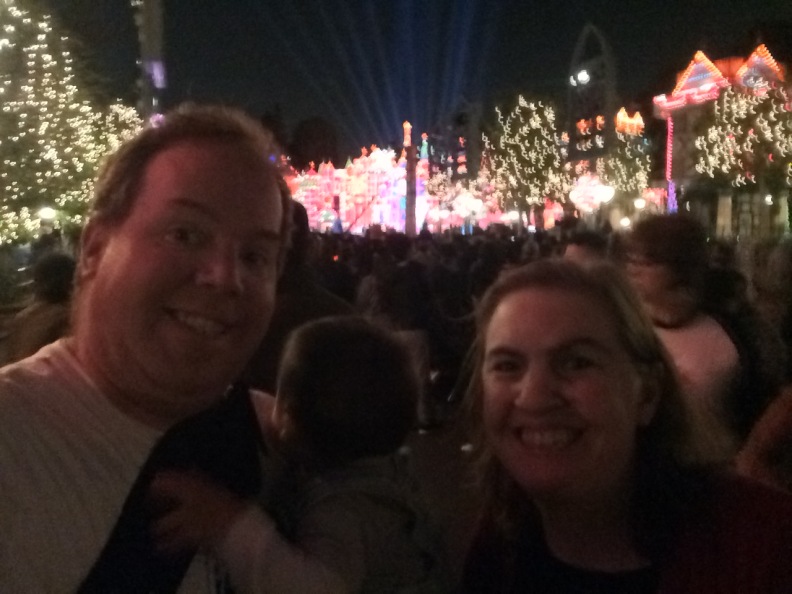 See what I mean? Colton couldn’t keep his eyes off the lit up It’s A Small World facade. Considering he was just under 8 months old, Colton did amazing on his first trip to Disneyland. I think he really liked the park…or as much as he could take in. We were at DCA and Disneyland for around 3 and a half hours. There were no melt downs in the parks. So, it was a very successful first trip.

Balloons were all over the comissary! 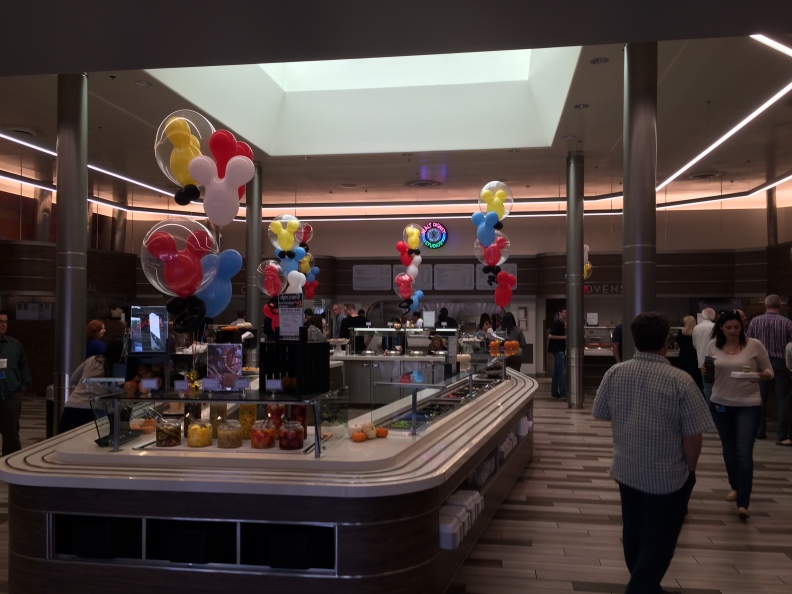 We even got these free cupcakes! 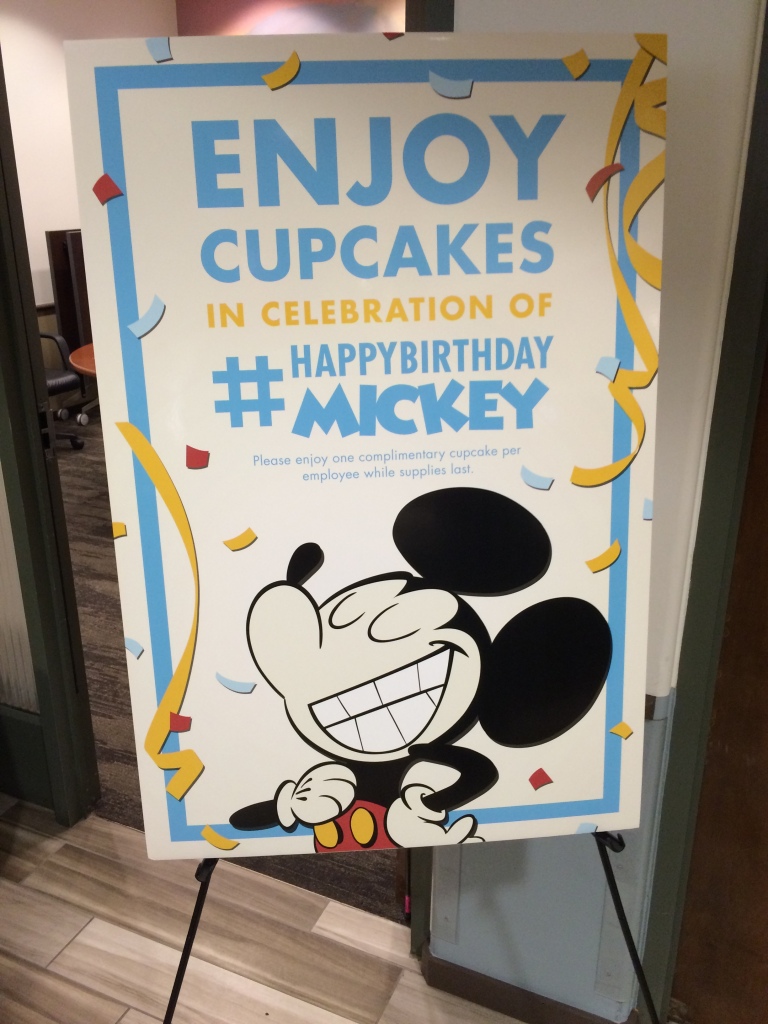 With the Avengers Super Heroes Half Marathon in the rear view window, it’s time to focus on the 2017 Sketchers Performance Los Angeles Marathon. This is my next goal race. I’ve got quite a lot of thoughts about training for this race that I’ll cover in a post on Friday. While I didn’t get any training in during the week after the Avengers Super Heroes Half Marathon, I did quite a lot of thinking about how to best approach training for the marathon. Spirit of the Marathon has been watched and I’ve worked out some goals for this training cycle. Quite honestly, I needed this week after Avengers off to get my head back in the game. Training for a full marathon is no joke and I need to have a solid game plan heading into training and throughout. It’s time to start laying the groundwork for ….

Have a great Thanksgiving everyone. See you back on the blog this Friday! Next week, I’ll get to my recap of the Avengers Super Heroes Half Marathon. I promise. TTFN! Ta Ta For Now!