Since the Avengers Super Heroes Half Marathon Weekend Event Guide has not been put out as of this writing, I’m going to share my last long run experience with y’all. The corrals and waivers were released on Tuesday. I’m pretty confident that the event guide will come out TODAY. So, I’ll cover that in a blog post tomorrow. I’m pretty excited about the new race course and have spent some time looking it over. Next week, I’ll break down the race course to give you all the 4-1-1 on what you can expect from this new course. Even though it’s a new course, it does have elements of other runDisney races at the Disneyland Resort. The really exciting part is that we won’t be running on the river trail! And we get to still run through Angel Stadium!

Y’all, it’s been a long time since I finished 13 miles. January to be more precise. The last time I crossed the end of 13 miles was right here at the mile 13 marker for the Star Wars Half Marathon at Disneyland on Martin Luther King Weekend. Back then, I anticipated running my next half marathon at the Rock n Roll San Diego Half Marathon in June. I started training for that race pretty much right after this race. 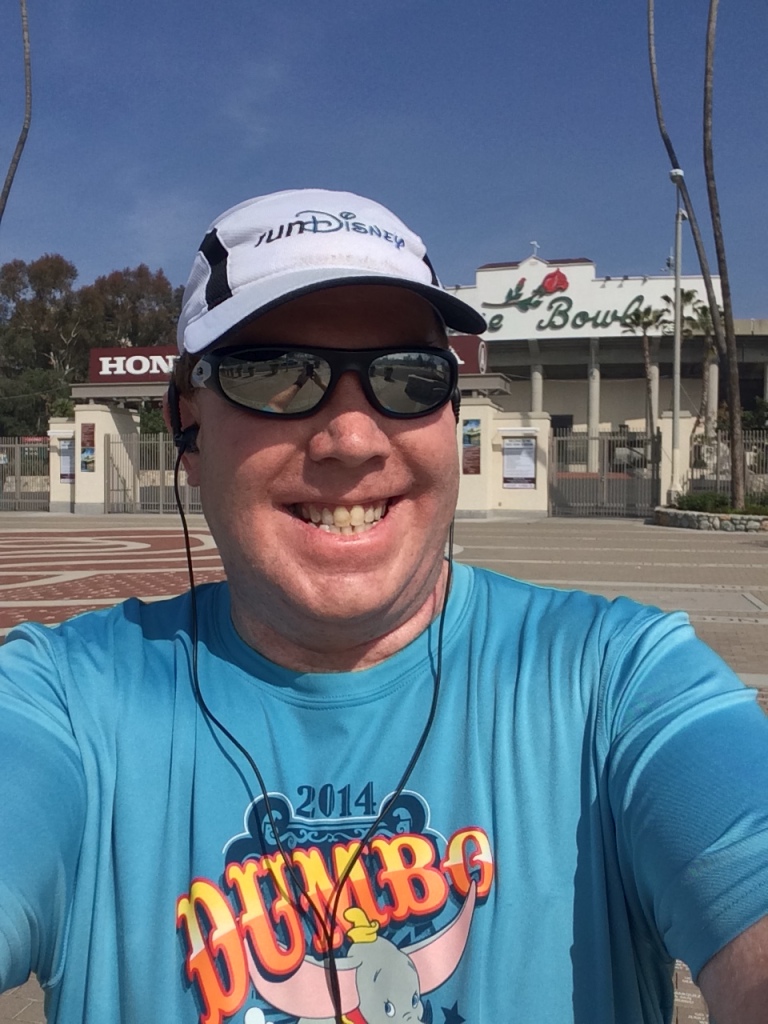 The next day, this little guy came into my life and everything changed. As I re-arranged my life, the Avengers Super Heroes Half Marathon came in to replace the TCS NYC Marathon. I set up the plan to prove to myself that I could run long  miles even with a little one at home.

In early July, I had worked myself back to 11 miles! Then, the Avengers Super Heroes Half Marathon training began.

So, I was pretty intimidated by heading out for 13 miles. it was the first time since January that I’d cover that distance. I decided I wanted to do these miles from Redondo Beach to El Segundo Beach and back along a path called “The Strand.” I love running here. Even though I haven’t had the best of luck on this path before, I still love it. The path is kept cleaner than the path I run at Santa Monica and there seems to be more people out and about. I had wanted to do this run two weeks prior. However, when I arrived and started getting ready for the run, I realized that I left my headphones at the apartment. Urgh! I am not one of those folks that can do a training run that long without music. So, I cancelled it. Even on this day, I was apprehensive about 13 miles. I was worried that my time would be so slow that a PR attempt at Avengers would look foolish. I was worried about the new run/walk intervals. How long could I hold on? The plan was to go as long as I could and see what happened.

As I started, the weather was cloudy. That kept the temps down…which I loved. Run 15 – 20 seconds, walk 40 – 45 seconds. That was the plan. Mile 1 went as well as usual. There were only a couple traffic lights to content with in this portion. I made all green lights! As I went along, I tried not to think about how long I’d have to keep up the run/walk intervals. I just focused on each run interval as it came. It felt great to be out and running at the beach again! I finished mile 1 in 11:38. I’ve got to admit that I worried that I went out too fast (which I kind of did). 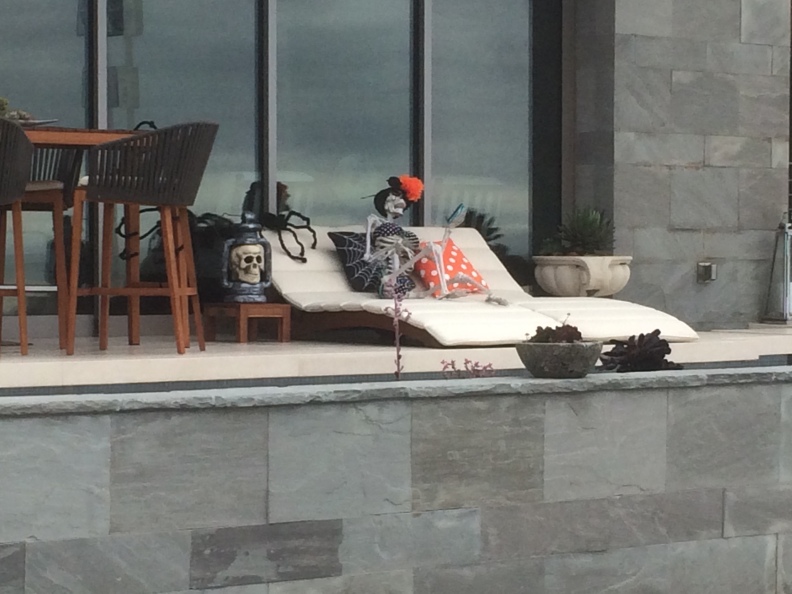 Running “The Strand” in mile 2, I settled into a rhythm. I loved some of the houses that I passed along the way. Some of them were very festive for Halloween! It made the time go by faster. Before the end of mile 2, I came to a place where I needed to stop for a moment…

There was a triathlon going on and the course cut through The Strand. So, I had to stop to wait for a gap in the people coming out of the swim portion. The transition to the bicycles were right next to the running path. I was able to cut across the course and continue on. Some of the faster runners in the triathlon were running by me as I made my way through the end of mile 2 and into mile 3. The end of mile 3 featured a climb up some stairs to higher elevation as The Strand continued. So, I walked up the stairs, skipping a run interval. I could feel myself struggling in mile 3. I was battling the feeling of…how long can I keep this up?

The start of mile 4 saw a South Bay running group passing me. One of the guys said I should consider joining them. I told him I’d think about it and he kept going. By mile 4, I decided it would be okay to take a few run intervals off if I needed to. The goal at that point was not to skip more than 1 run interval. So, if I was to skip the run at 40 minutes, I’d make sure to be running again at 41 minutes and 42 minutes, etc. The game I played was to keep as many of the run intervals as I could handle. It’s amazing how far you can go when you tell yourself to wait until the end of mile X to get an extra walk break.

By the end of mile 5, I was at 1:03:43. I was only 3:43 off the pace I’d ideally like to be at! That gave me a huge confidence burst! I wasn’t doing too bad. Yes, I had missed a few run intervals. However, I was feeling strong at the end of mile 5. The start of mile 6 brought the end of The Strand. There was a rather steep downhill to get to the continuation of the running/cycling path. I had no problems running down it. The path from there to El Segundo Beach is rather interesting. I started passing and being passed by a couple of women who were out on the path. Eventually, I put the ladies behind me. I’m not sure where they turned around or finished. But, it was kind of fun chasing down these runners and putting them behind me. Distractions come in lots of places. We need to take them when we can.

There was this hill in mile 7 that I seriously thought about walking. However, I had a run interval coming and I decided to see if I could make it. After all, if I could make it the full 20 seconds up the hill, I could run 20 seconds anytime! The pic above is at 6.50 miles and where I’d turn around. It took less than an hour and a half to get to the turn around. I felt great about what my finish time could be! At the mid-way point, I was envisioning a finish around 2:50:00. While that’s not my goal for Avengers, it would be a fantastic time for my first 13 miler since January!

On the path back, I felt awesome about the overcast skies! I kept chugging along…run 20, walk 40. There were occasional extra walk breaks. However, I was surviving these intervals much longer than expected! Mile 8 featured going back up that crazy steep hill I ran down at the start of mile 6. This time, I walked up the whole thing. I only missed one run interval in doing so. There was a nice downhill after this which helped me to a pretty good split for mile 8 …13:08! By the end of mile 8, was at 1:43:32. With 5 miles to go, I was still in range for a 2:50:00 or quicker for 13 miles.

In mile 9, I re-passed some decked out houses. I also started to unravel in the run/walk. Mile 9 was a really difficult battle. I was feeling tired and again doubted I could finish with the run/walk intervals. In this mile, I decided to walk for a quarter-mile. I had to climb down the stairs again that I came up on the way out. Once I got to the bottom, it was back to the run/walk intervals. At the end of mile 9, I stood at 1:57:14. I’ve been better and I’ve been worse at the end of 9 miles. However, I knew I slowed down quite a bit. During mile 10, my lower calf cramped up again, bringing me to walk it out the rest of the way. On my 15 mile run, I need to bring some pretzels. They might help me with this problem. 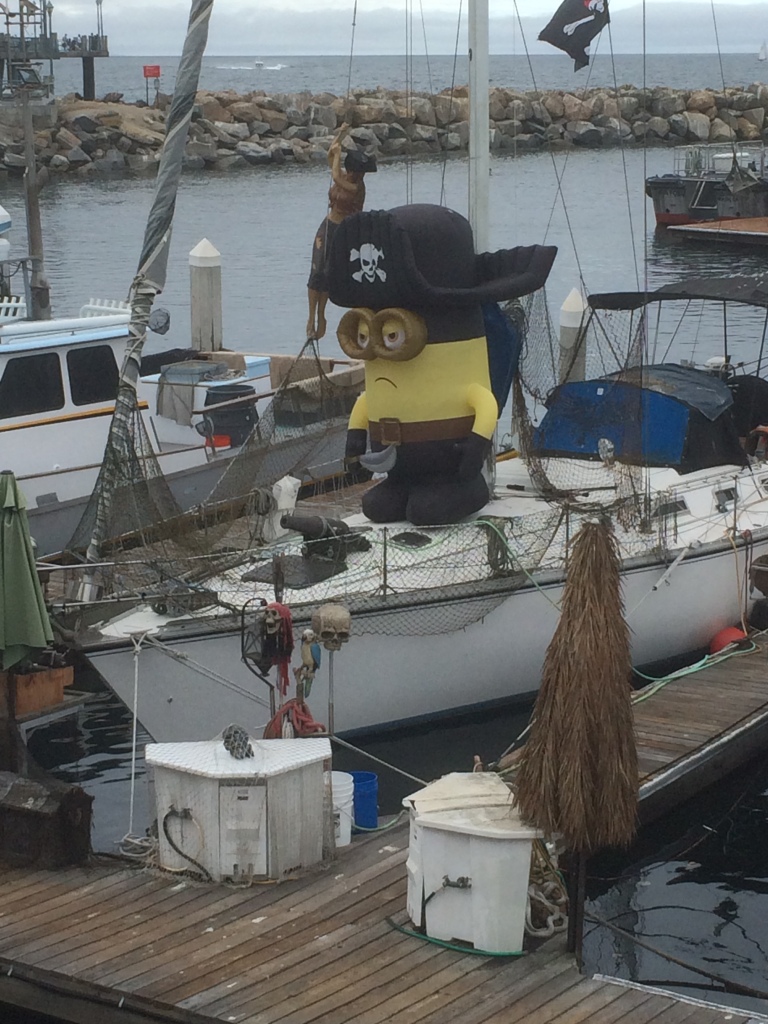 As I got back to the marina at Redondo Beach, saw this fun guy! Well, I saw him heading out in mile 1 as well. But, I was on a run interval when I passed him. So, no picture. By the time I got back to him, this 13 miles was almost finished.

Here are the splits. Can you tell where I started to walk? It’s rather obvious. Considering how much I walked at the end, I’m actually thrilled with this time. It seems weird to have a 3 hour, plus, 13 mile run and be happy about it. However, if I had pretzels with me, I might have been able to shake that lower calf cramp and run again in the final 2 miles. So, this run could have easily been near PR pace.

When I got back to this area, I sat for a little while and reflected on how the run went. As you might imagine, my initial thoughts on this 13 miler were not as good as I feel about it now. As I reflected on how far I’ve come since the Star Wars Half Marathon in January, I realized that the 3 hour, plus time wasn’t all that bad. If I would have gone the extra 0.1 miles, I would have still beaten my Star Wars Half Marathon finish time. Although, I wasn’t stopping for character photos along the way.

So, here’s where I’m at as I write this…There is no way I’m going to finish the Avengers Super Heroes Half Marathon in 2:30:00 or less. My training is telling me that. One important decision I had to make was whether or not to go from this 13 mile run to a 15 miler the following weekend and a 17 miler this coming weekend before having a recovery 6 miles the weekend before the race. I think that having a recovery week between the 13 and 15 mile runs is best. So, this coming weekend, I’ll be going for 15 miles. After the 15 mile run, I can better asses what my time goals for this race should be. I still have hopes of making the race a half marathon PR attempt. At the very least, I think hitting a runDisney half marathon PR is totally doable. I want to see how this weekend goes before making my final race goals. One thing that is certain, however, is that I want to run the Avengers Super Heroes Half Marathon with run/walk intervals of 20/40 seconds. The more I do these intervals, the more comfortable I am with them.

No matter what happens race day, it was good to see that I can still finish 13 miles. It’s a new personal record distance as a running dad! Time to break that record this weekend!

One Reply to “Getting Back to 13 Miles!”