September has been a brutal month for me as I’ve watched friends run in not one, not two, but three races that I would have loved to run in with them.

The first of those races was the Disneyland Half Marathon. I know that I skipped the race this year for a reason. The price of the Dumbo Double Dare had raised too high for my liking. So, I decided to skip it. However, that doesn’t mean I was 100% okay with not running it on the race weekend itself. As I attended the We Run Social Meet-Up, it was strange that my races were done for the weekend. I missed getting to run through Angel Stadium I missed the car show that goes on for a few miles. I missed the feeling of accomplishment for running (and walking) my way through 19.2 miles in two days. I missed being apart of the “big dog” group of runners. It was the right thing to do. Especially, now that I have a new little guy in the house. But, that doesn’t take away the pings of longing to be apart of those who got to run the half marathon. 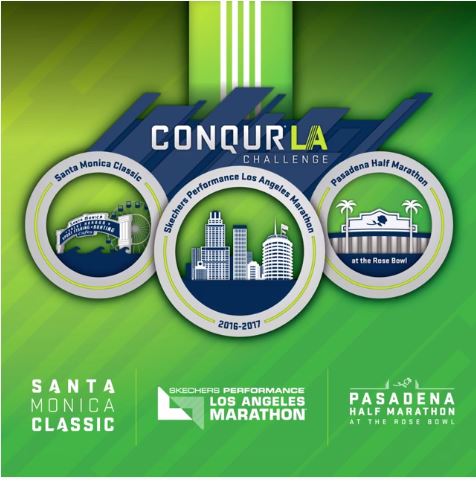 Locally, the Conqur Endurance Group, has put together a challenge of their own. With Sketchers taking over sponsorship of the Los Angeles Marathon, the Conqur Endurance Group was part of that. They put together this little challenge. Run the 2016 Santa Monica Classic (10K or 5K), The 2017 Inaugural Pasadena Half Marathon, and the 2017 Sketchers Performance Los Angeles Marathon and you will earn this beautiful medal. They even had the option of paying for each event separately at different times to qualify. Of course, if you wanted to save $15, you could pay for the whole challenge right up front. Get this. The challenge cost was somewhere just over $300. That’s right runDisney fans. For less than the cost of the 10K/Half Marathon challenges at a runDisney race, you could run a 5K or 10K, a Half Marathon, and a Full Marathon. Sounds good. Doesn’t it? Well, it’s still $300. On top of that, the first race (the Santa Monica Classic) was one week after the Disneyland Half Marathon weekend races. The second race (the Pasadena Half Marathon) was one week after the Star Wars Half Marathon weekend. Neither of these fit within my training plans very well. I had 11 miles to run on the weekend after Disneyland. The weekend before the Star Wars Half Marathon, I have 20 miles on the calendar. So, to have a weekend with 20 miles, another weekend with 19.2 miles (Star Wars Rebel Challenge), and then 13.1 miles (Pasadena Half). Oh, and then run 23 miles the following weekend was a “no Buenos.” I’ve got 7 miles on the calendar the weekend of the Pasadena Half Marathon weekend and I’ll need a short recovery sort of long run then. 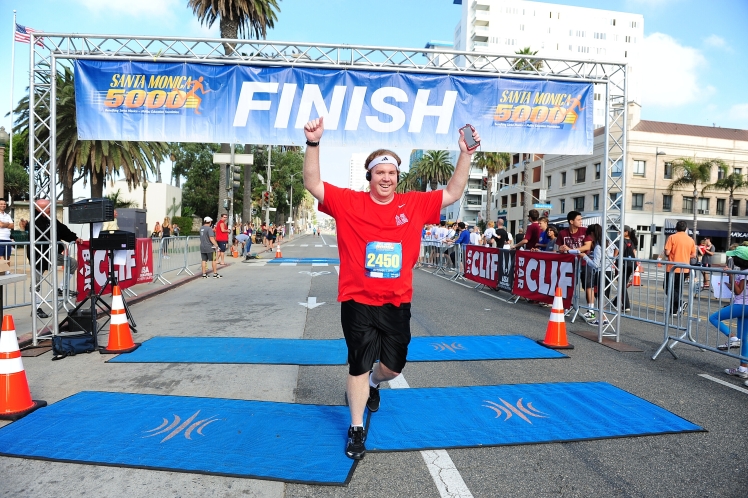 However, when the Santa Monica Classic was run on the weekend after the Disneyland Half Marathon, I felt the same ping of wanting to be there. After all, the Santa Monica 10K was my very first 10K back in 2012. So, there’s a bit of nostalgia with this one. Although, we didn’t get a finishers medal. Oh, how times have changed.

I got a one weekend reprieve. Then, this past weekend, the Inaugural Disneyland Paris Half Marathon Weekend happened. My Instagram and Facebook feeds started filling up with pics from Paris. Some of my running friends took advantage of being in Paris and made their trip for this race about more than just Disney. Who could blame them? I’m sure that, even the WDW runDisney race vets could see the opportunity to leave the Disney bubble and explore one of the finest cities in the world. As for the races, they looked amazing! Both the 5K and the Half Marathon looked like they were filled with a lot of character photo ops. As a matter of fact, it looked like there were far more character photo ops than any of the runDisney races here in the USA. Yes…I’m totally jealous of my friends who got to run this race weekend.

That being said….I don’t foresee a trip to run this race in my future. The cost of going to Paris from LA is the biggest reason why I don’t see myself running this race. Everything else…the opportunity to run through Disneyland Paris and actually see the Disneyland Paris Resort, the lower cost for the race entry, and what an amazing job they did in putting this race together would have me there in a heartbeat. One other factor that would keep me from this race is when it’s run. You see, if I ever get to France, I really want to go in July so I can see at least one stage of the Tour de France bicycle race. I’ve been watching this race on television since 1985 and have dreamed of seeing it in person one day. So, the September date wouldn’t work for me. If I ever make it out to France, it’s got to be part of a 3 week vacation that would include time in both France and Italy. That’s the dream for me.

All of these races that I’m missing out on are things I’m ultimately okay with. Why? The peeps in this picture with me. I have an amazing wife and an amazing little guy. So, life is good! I still fill the tugs on my heart to do more races than I can do. But, it ultimately comes down to the fact that I need to put my money in other places and that’s okay. I’ve also got to keep myself to a training plan and realize that running all the races could really cause some problems with that training plan.

If you struggle with not being able to run “all the races.” Don’t worry. You are not alone. However, it’s going to be okay to miss some races. When you feel that ping in your heart because you aren’t with your friends racing, realize that most races are around for more than a year. So, come up with a plan to run the race next year (cancelling one of your races from this year to make it happen). Or maybe come up with a 2-3 year plan. Just remember, you will likely have to cut some races from your current calendar to make the other races happen. Be okay with that and you’ll be fine.