Week 5 of the Avengers Super Heroes Half Marathon training is now in the books. There were 15 training runs on the calendar through this week and I’ve finished all 15! So, I’m off to a fantastic start. On top of that, I’m watching improvement on the mid-week 4 mile runs! Unfortunately, this is summer and my weekend long runs are suffering under the heat. I’ve finished the distances. But, the runs have been slow. Let’s look at how it all went down.

Tuesday night, I headed out for another 4 miles. As I did, I was seriously questioning how I should approach the run. The previous Wednesday, I finally broke the 48 minute mark and I really wanted to keep that going. Tiredness for these runs are becoming the norm. It hasn’t seemed to effect the finish times too much. So, I think, going forward, I’ll only mention it if I feel deathly tired…like questioning my sanity about running because I’m so tired…and when I’m feeling energized and ready. I thought a lot about switching my run/walk intervals to doing a straight run 30 seconds, walk 60 seconds, as opposed to switching to this interval after mile 1. I decided to give the switch one more week.

On Tuesday, I got out to my best first mile yet on this route! I was running and walking faster. There were two stoplights that I stopped my watch at. Each time, it read under 12 minutes per mile average speed! So, I kept pushing all the way to the end of the mile. The last half mile, I could feel like I was pushing it. Maybe, I didn’t need to make any switch after all! I finished mile 1 in 11:56! My first sub 12 minute, first mile on this route in quite some time! The big question heading into mile 2 was how the fast start would effect the rest of the run. As I started mile 2, I thought to myself, “Great! Just keep the same pace as the previous Wednesday and I’ll have a fantastic finish time!” Unfortunately, I did get out too fast in mile 1. It did have an effect on mile 2. I made the switch okay and hit all my run intervals. However, at the end of the mile, I was at 23:32. That meant, I completed mile 2 in 11:36 vs. 11:22 on the Wednesday before.

By the start of mile 3, I realized that I wasn’t going to be finishing faster than the previous 4 mile run. So, I quit trying to do that. Instead, I just ran my run/walk intervals and would decide how to do mile 4 at the end of mile 3. Well, much to my surprise, I was roughly at the same time as I was at when I finished mile 3 previously! I was at 35:21. I was only a few seconds slower than the previous 4 miles. So, I had to keep the 60 second walk breaks going and see where I’d finish. At the end of mile 4, I was at 47:44…8 seconds slower than my previous run! 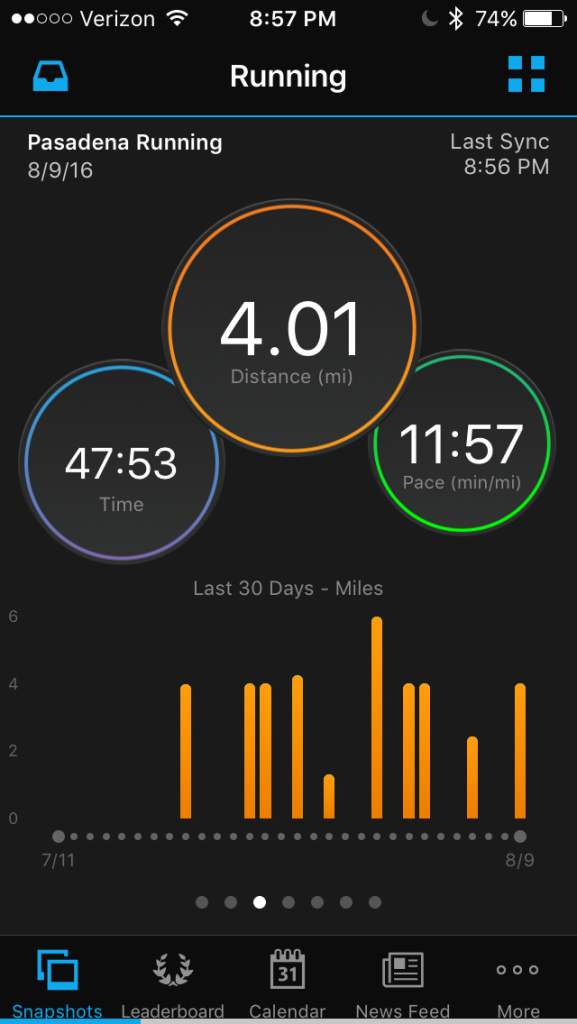 Then, I somehow hit a button to start the clock when I thought I was stopping the run. So, a 9 extra seconds ran off before I got everything stopped. Even with that, I wasn’t that far off from my previous 4 miles! Keeping it under 48 minutes again felt amazing!

So, on Thursday, it was an easy decision to keep the switch from 90 second walk break in mile 1 to 60 second walk break the rest of the way. This run went kind of the opposite of Tuesday’s run. I was feeling much slower on mile 1. The legs were tight and it took a little longer to get them warmed up. I kept the 90 second walk breaks and it was keeping me just over 12 minutes for the first mile. I finished in 12:12…16 seconds slower than Tuesday. Old Town Pasadena was hopping on Thursday night. So, mile 2 involved a lot of people dodging. Each time, I thought to myself that this was great practice for weaving in and out of traffic on a race! I finished mile 2 in 11:39 for a total time of 23:51. Urgh! I knew I was faster on Tuesday. Maybe this just wasn’t my day. So, yet again, at the end of mile 2, I sort of gave up on a great time. I was just hoping I’d finish faster than 49 minutes.

Maybe it was just deciding to focus on hitting all of my 30 second run intervals. Maybe it was the giving up on a great time. But, for some reason, mile 3 was the stellar mile of the day. I finished mile 3 in 11:27! My cumulative time was 35:18! I couldn’t believe it! This could actually be a better run than Tuesday! So, kept pushing….kept believing. When I got to 3.75 miles, I could feel a great finish time… 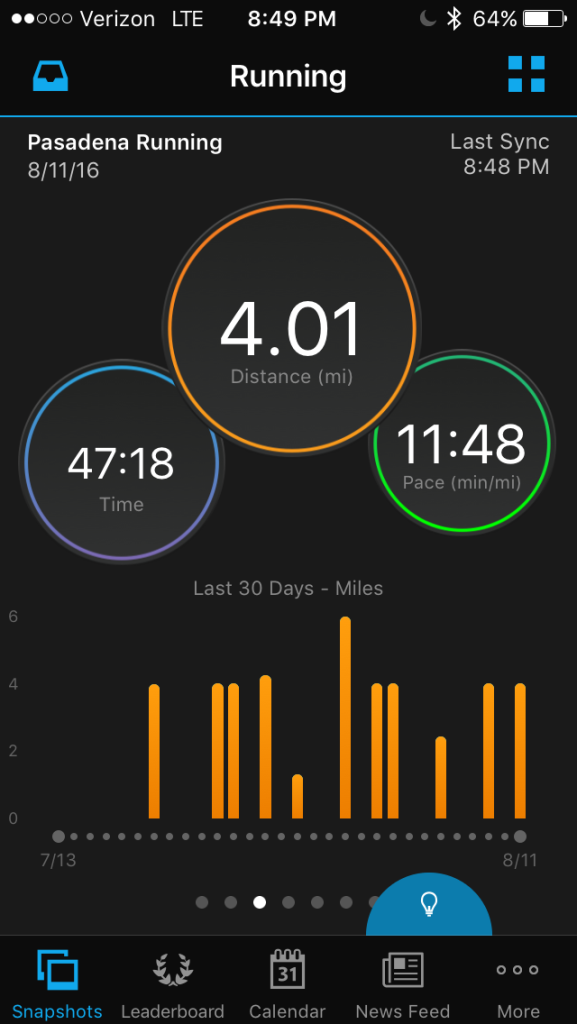 Yep! Even faster than the Wednesday before! Getting out for these mid-week runs is paying off!

Then, Sunday came and brought me back to earth. This weekend was brutally hot out here in So Cal. I really wanted to use this run to measure my progress from my last 7 mile run. I wanted to run the same route and see how it went. However, this day was much warmer and I had to face the fact that this run was most likely going to be slower. I needed to be smart with this run because of the temps. My first alarm on my phone didn’t go off. So, I woke up a little on the late side. That meant running in warmer temps. I spent part of the hour before I headed out contemplating just skipping the run. I was feeling tired and was in the process of talking myself out of it. After all, the weather app I have on my phone was telling me it would get into the 80’s before I finished. Did I really want that?

At the end of this debate, I just decided I needed to be okay with a slow run. Getting in the miles is HUGE for me. So, I would just have to endure it. I changed my route to make things more tolerable. Instead of running my 6 mile route around my apartment with adding a mile at the end, I’d run 2 laps of the 2 mile route around my apartment and add a mile. This route had more shade in it. So, I figured it would be better. I also went into the run with a plan to take on water or Gator Aide ever mile to keep hydrated. I also went with the mantra that “I love running in the heat! I’m going to run smart and will be okay.” Lastly, I was going with a 90 second walk break the entire 7 miles. Run 30 seconds, walk 90 seconds for 7 miles. If I needed to skip a run, I’d do it. If I needed to stop for a few seconds to a minute, I’d do it. That was the plan and I stuck with it.

Right from mile 1, I could feel the heat. I was running most of the mile in direct sunlight. So, there was no break. Mile 1 felt slow, but I was doing okay with the heat. I knew it was there. But, I could hit all my run intervals. Mile 1 took 12:12 (same as my Thursday run on a different course!). Mile 2 in this course is the hard mile. I knew I would be slower. I kept trucking along. I must admit, part of me hoped I would be too off at the end of this mile. Unfortunately, I finished the mile in 13:18. The cumulative time was 25:30…a full 90 seconds slower than the 12 minute per mile average I would have liked. I knew the last mile of the loop would be the easiest as far as elevation. It’s largely downhill and flat. I finished it in 12:36. The total time for lap 1 was 38:02. This was very slow for me. Even though the last mile of the loop is largely downhill, it’s also mostly in the sun…with very little shade.

So, by the time I started my second loop, I knew any hope of a great finish time was completely gone. These last 4 miles were all about merely finishing the run and getting all the miles in really warm conditions. My challenge for the last 4 miles was to hit every single run interval as they came. Even if I was slow, I wanted to run 30 seconds out of each 2 minutes of time. My run was no longer about the overall time or my average pace. I just wanted to finish. My first goal was to keep going through mile 4. Then, I wanted to get past the street I lived on. Once I got there, I knew I wouldn’t be able to talk myself out of quitting before the end of 7 miles. After all, I’d get back by my apartment around the end of mile 6. By then, it was only another mile. That’s how I got through.

This finish time was very slow. It’s my slowest 7 miles in quite some time (although, it should be mentioned that I don’t do 7 mile runs very often). Even though I finished with a slow time, I was really happy that I finished the entire thing. I could have quit a few times, but didn’t. I ran a smart 7 miles instead of trying to get to a goal the heat would have prevented. On top of that, I get to finish the 15th run of this training cycle out of 15 that were on the calendar. I do wonder how I’ll feel if I hit every single run on the training plan exactly as Jeff Galloway had designed. I’m a long way from that. There are 13 weeks left before the Avengers Super Heroes Half Marathon. So, I can’t go there just yet. 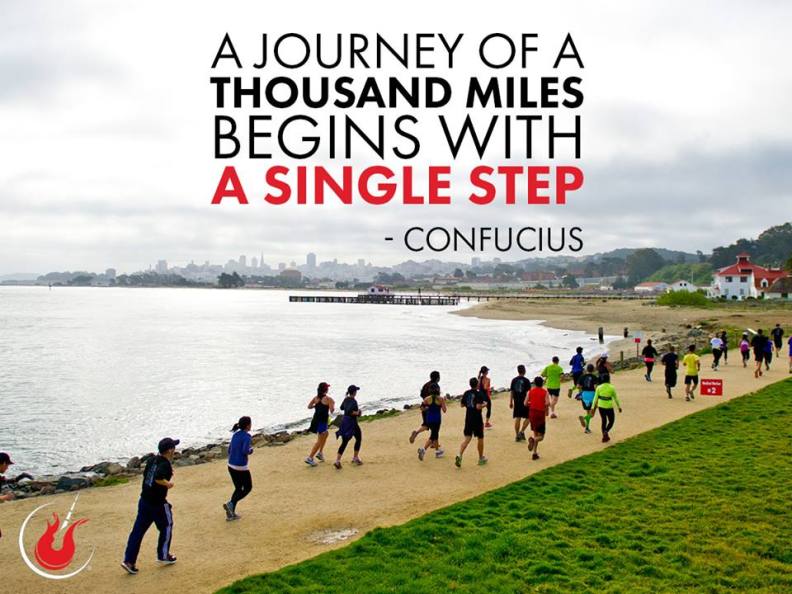 Y’all, it’s 5 weeks down, 13 to go. While I’ve been excited about the upcoming Disneyland Half Marathon Weekend, I’ve got bigger things on my mind. I’m not thrilled with the fact that my 6 mile run (two weeks ago) and my 7 mile run (yesterday) went so slow. However, I do understand that I’m running in warmer temps that I’ll likely face at both the Avengers Super Heroes Half Marathon and Disneyland 10K. This week, my thoughts about the Disneyland 10K are that I’ll just have to go out and go as hard as I can and see what will happen. I don’t feel confident as I write this that I’ll PR that race. It’s okay if I don’t. My main goal is the PR at Avengers Half. In the scheme of that mindset, I’m not at all worried about how I finish the Disneyland 10K race. These summer runs are extremely important right now. Next year, I’ll be training for the NYC Marathon in this kind of heat. So, it’s good now for me to figure out how to run in hot temps. All the work I’m doing now will pay off next year. At least that’s the way I see it. Every mile counts. Every mile matters. Bring on Week 6!

One Reply to “Week 5 of Avengers Half Marathon Training – Consistency is Hard, Yo!”