Remember this day? I ran 9 miles at the Rose Bowl in preparation for the Rock n Roll San Diego Half Marathon. The very next day, Brooke and I got the call that would forever change our lives. Ever since Colton came to us, I have been gradually working my way back to regular workouts. Part of the work has been in convincing myself that I could. Last week I wrote about a new workout routine I was going to be using. So, let’s see how this week turned out.

On Tuesday, I headed off to the gym to start this new routine off right. I finished 4 x 400 on the treadmill and ended with a total of 2.25 miles covered. My average pace on the treadmill is never as good as what I can do on the road. I’m hopeful that, by adding an extra gym session, I’ll be able to figure out how to get my run and walk intervals at the right speed to make them more effective. I didn’t stop with the treadmill, though. I also got work on the chin ups and dips machine, abs, and leg press. Since I’m not used to this kind of routine yet, by the time I got to the elliptical machine, I was fried. I managed 15 minutes on the elliptical and decided to call it a day. Plus, I had been away from my wife and little guy for long enough. The downside of a gym workout in the middle of the week is that I had to wait to use most of the machines I used. That adds time. Oh well, it was a start. That’s what mattered to me this week. 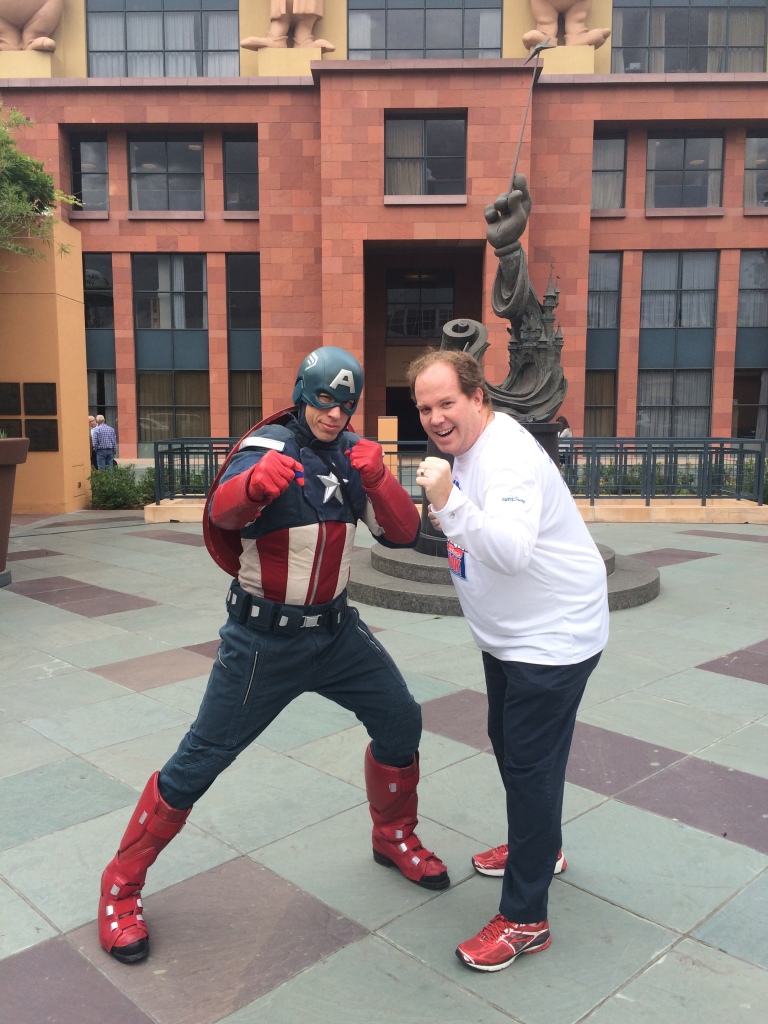 I missed my run on Thursday because the little guy didn’t want to go to sleep early enough. He just wanted to play. On Friday, Captain America: Civil War opened in theaters. To celebrate, Captain America dropped by the Walt Disney Studios to encourage us to stick with Team Cap. 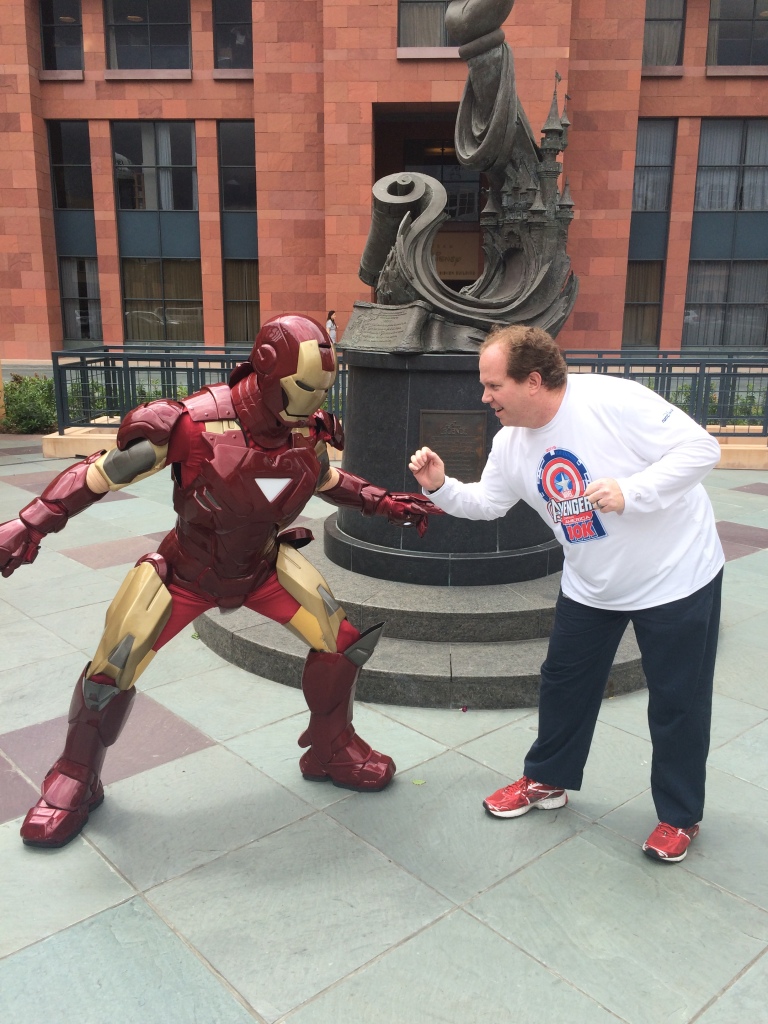 To be fair, we also had Iron Man show up! Since I’ve never been able to get a pic with Iron Man (he’s not in the Disney theme parks), I had to make sure to get my pic with him. Even though I was wearing Cap gear, he tried to sway me to Team Iron Man. It didn’t work.

They also had cupcakes for both Team Cap and Team Iron Man. You had to be careful which you’d chose. You were only supposed to take one. So, pick wisely. 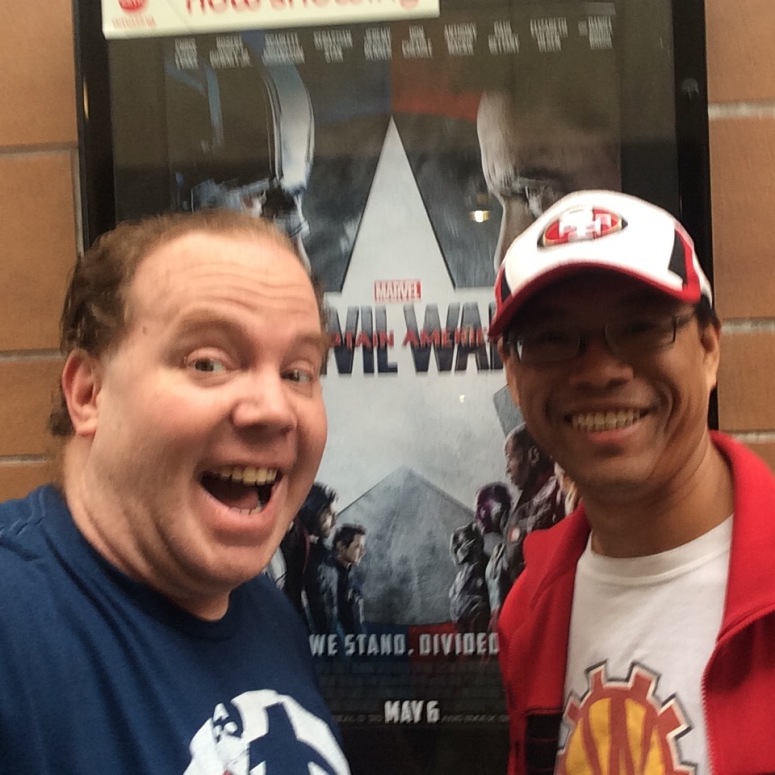 On Saturday, I headed off to see Captain America: Civil War with my friend. Such a great movie! I absolutely love all of the Captain America movies. This one was the best of the bunch. All of those Avengers in one place…doing battle with each other. I loved the additions of Black Panther and Spider-Man. Oh…also Ant-Man. If you haven’t seen it yet, you must. It totally lives up to the hype! 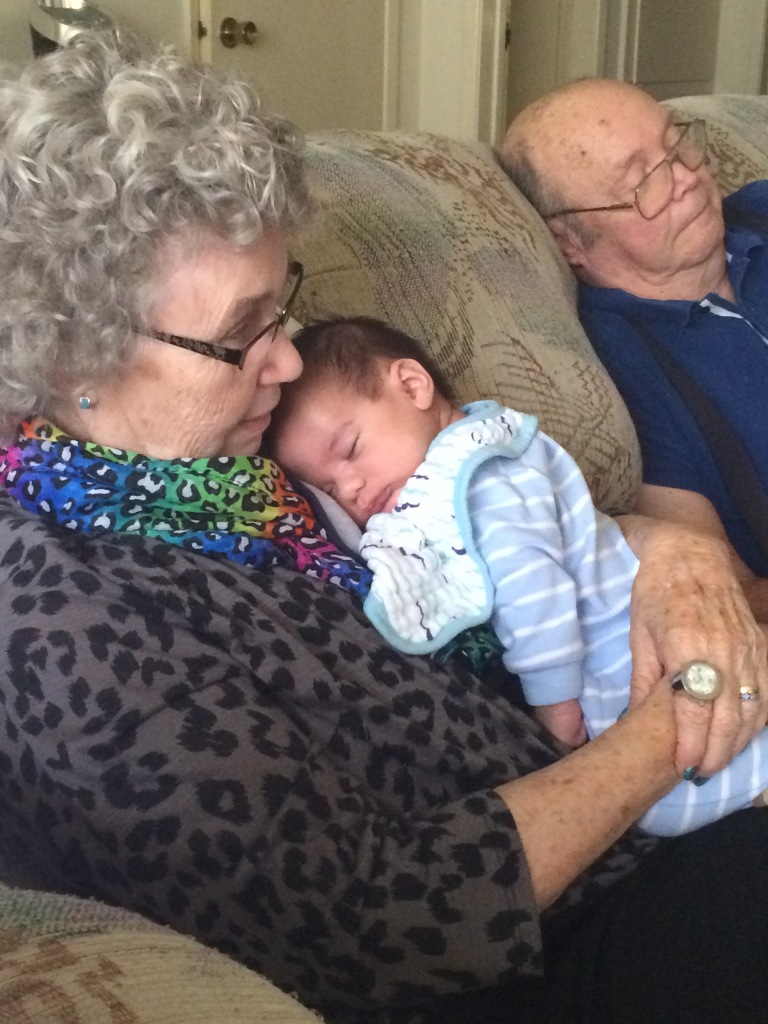 My parents came by as part 1 of Brooke’s first Mother’s Day as a mom! We had an awesome time with my parents and we were thrilled that Colton decided to wake up before my  parents had to leave. So, they had some Colton time!

I finished my Saturday off with a 4 mile run! I’m not going to lie. I was a little tired by the time I got around to running. So, there were some serious thought of skipping it. However, I knew that I had to get out and run again. I’ll never get stronger I I skip. So, off I went. Mile 1 was rough. It always is on this 4 mile route. I told myself to not worry about the time. Since Colton has arrived, I have only done 3 mile runs. So, this one was already going to push me a little. Mile 1 took a little longer than 12 minutes. I had a headache through most of this mile. It lasted until I got into mile 3. By then, I was still over a 12 minute per mile pace. So, I just decided that this was going to be a slow run and to see how close to a 12 minute pace I could get. By mile 4, all I could do was focus on finishing. I was running okay. It was just slow. My finish time was just over 49 minutes. It wasn’t a horrible time. I’ve actually run this route slower. So, it was a good place to start!

On Sunday, I headed back to the gym. It was a busy day. So, my energy wasn’t where I wanted it to be. I could have used a half hour nap. However, I didn’t have the time to give. I decided it was more important to get a 2nd gym workout in the same week for the first time in forever than it was to have all the energy.

I once again completed the 4 x 400 on the treadmill. I think, because I was feeling tired heading into the gym, it took more mental focus to get through each 400 running set. The first lap was the hardest, which surprised me. I was feeling tired before I even got half way. But, I made it to the end anyway. As I took a walk break, I told myself that I could make 2 x 400 any day. So, if I needed to quit, I had to wait until the end of the 2nd run. I was feeling much better on the second lap. So, I went for it all and was super happy to finish the last lap. My time on the machines felt much more comfortable. However, I was running late. By the time I got to the elliptical machine, I pretty much needed to just go with it. Unfortunately, I wasn’t feeling it. I tried for 4 minutes and quit after 5. If I had time to regroup, I probably would have found a way to get to the end. When you’re in week 1 of a new routine, it’s okay to have a few misses. That just gives me motivation to be better in the next week.

On Mother’s Day, Brooke and I finally made our family of three public on Facebook! It feels amazing to be able to share our boy with the world! It’s been an adjustment learning how to train with a newborn in the house. I’m still a work in progress. However, the only way to get stronger is to just keep going one mile, one workout, one week at a time. Here’s to another week to be even better!

4 thoughts on “Getting Back to a Better Place in Training”