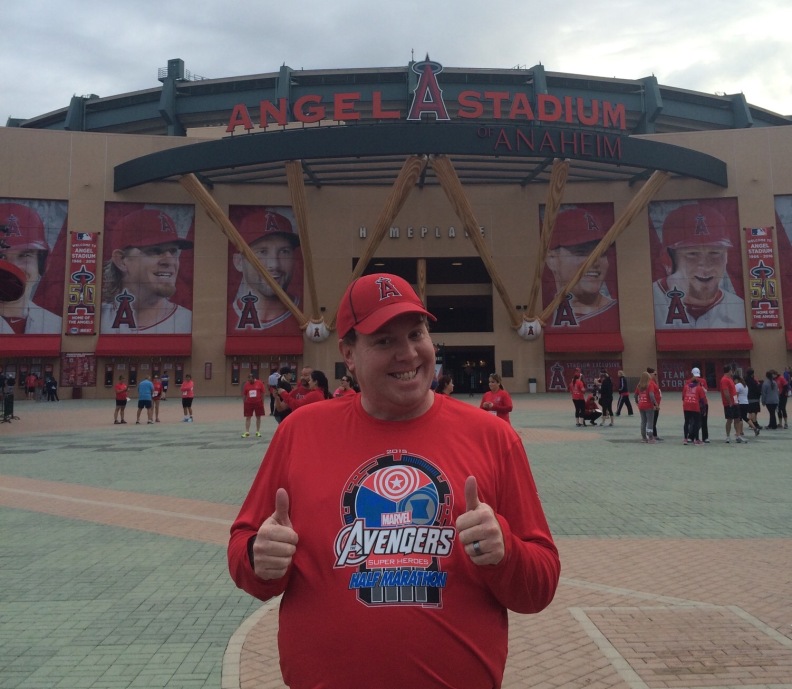 This past Saturday, I ran in the Angels Baseball Foundation 5K. I love this race! This was my 4th time running in it. To tell you how much I love this race, the first two times I ran it, they didn’t even have a finisher’s medal. Yep. I ran a race without any bling. Shocking…I know. However, I love running through the Big A!

One thing I love about this race is that it starts at 8am. So, I didn’t have to leave my apartment until 6am. For this runDisney regular, that was an awesome time to leave for a race. I arrived at Angel Stadium a little before 7am. So, I had plenty of time to chill out in the car before hand. However, around 7:20, I headed out for a stop at a real restroom before the race. I also got to walk around taking lots of photos. 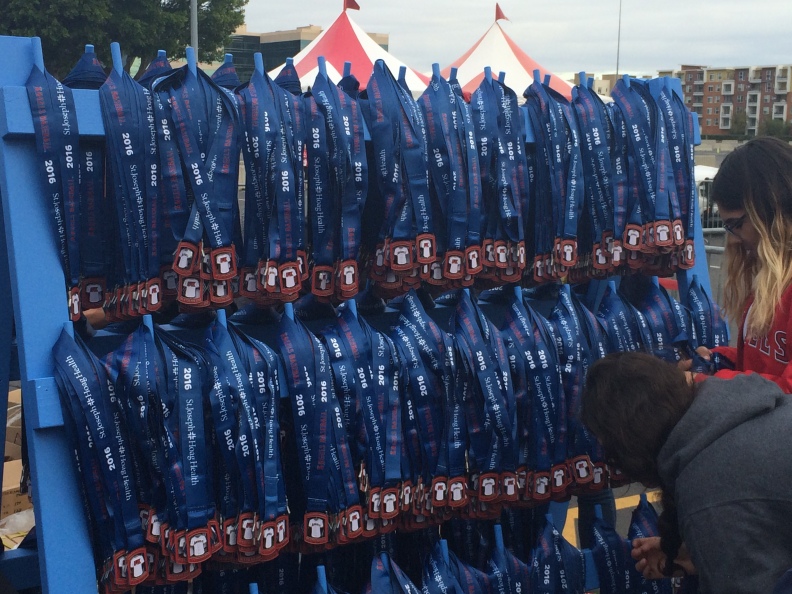 Since this race finished so close to the start line, I got to check out the set up of the finishers area. Look at all those medals! 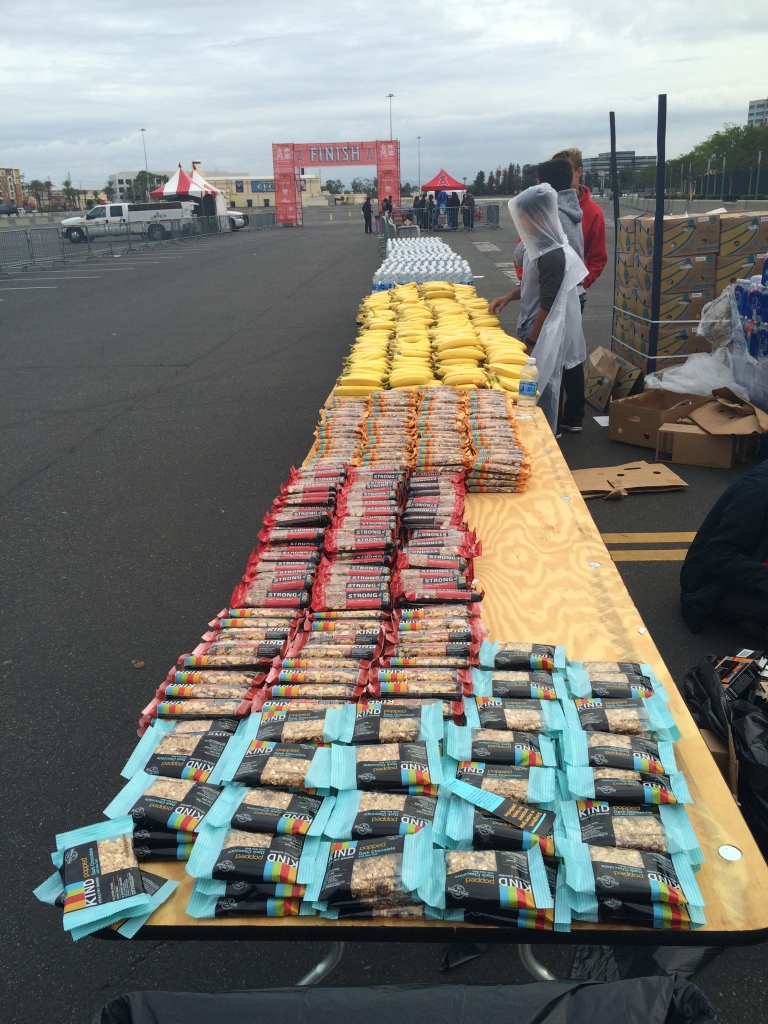 All the post-race food was ready to go! 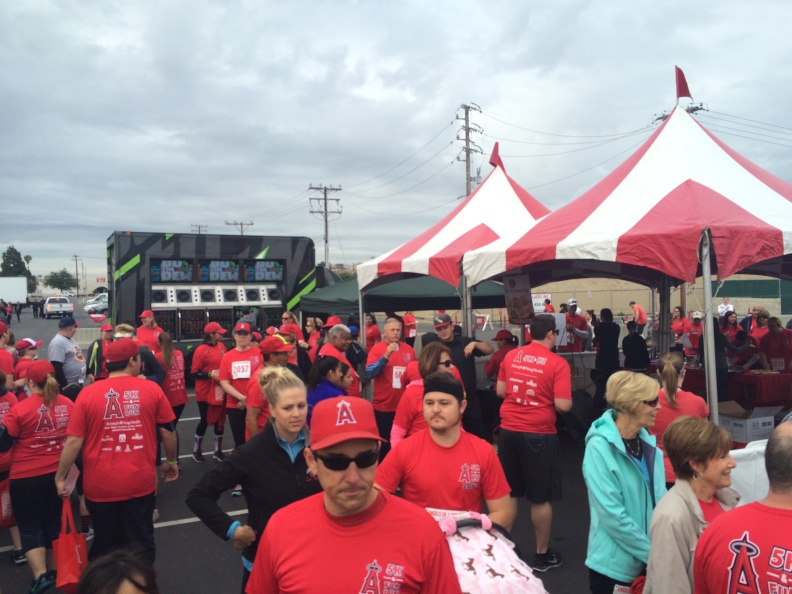 There was a race day expo for this race. It was up and going before the race! That’s kind of fun to give us something to do before we get running. Plus, with the parking lot right there, we could have checked out the expo and taken anything we got at the expo back to our cars before running. 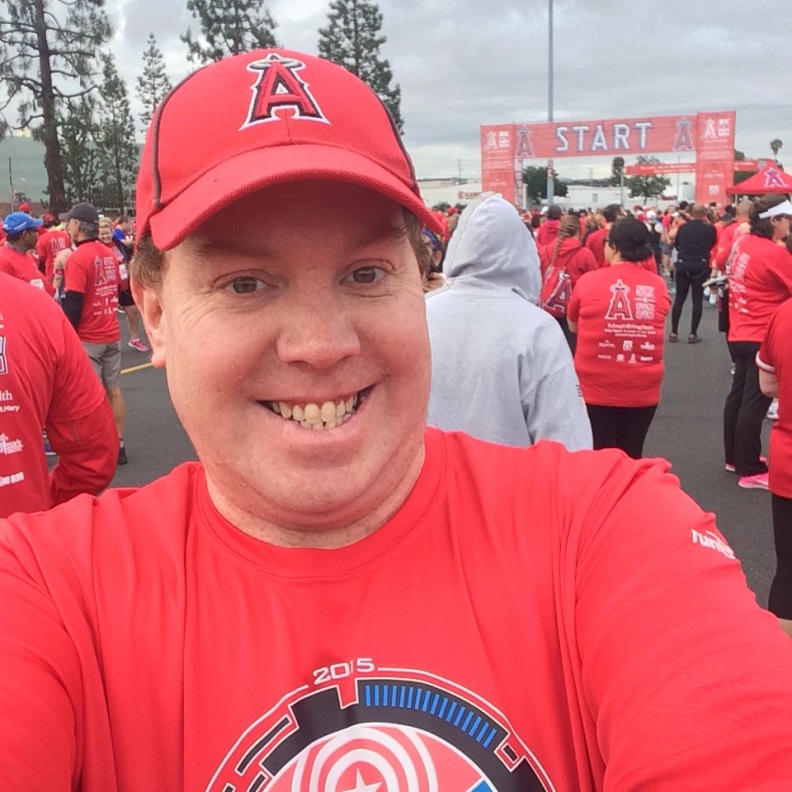 Well, around 15 minutes before the start time, I wandered into the starting chute. I could call it the corrals. Except, there were no corrals for this race. It was one mass start. 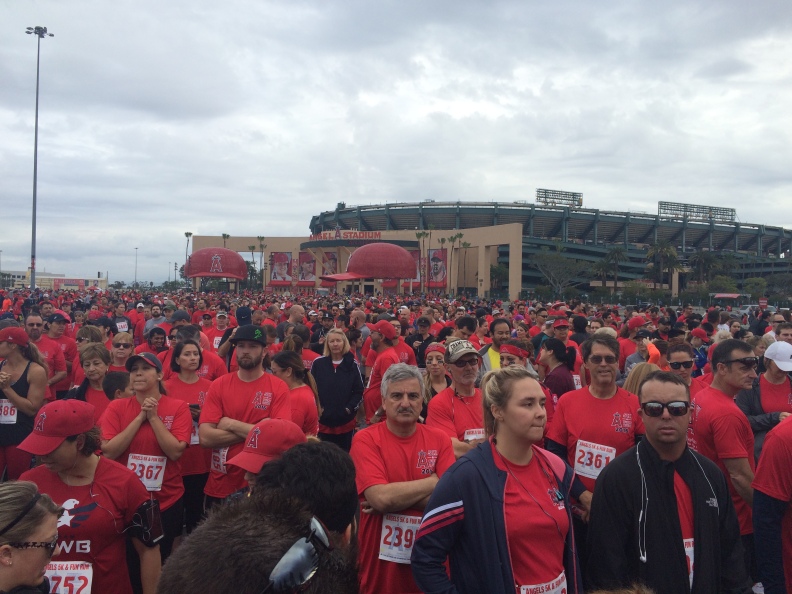 We had around 5,000 runners for this 5K! This was the view behind where I was. 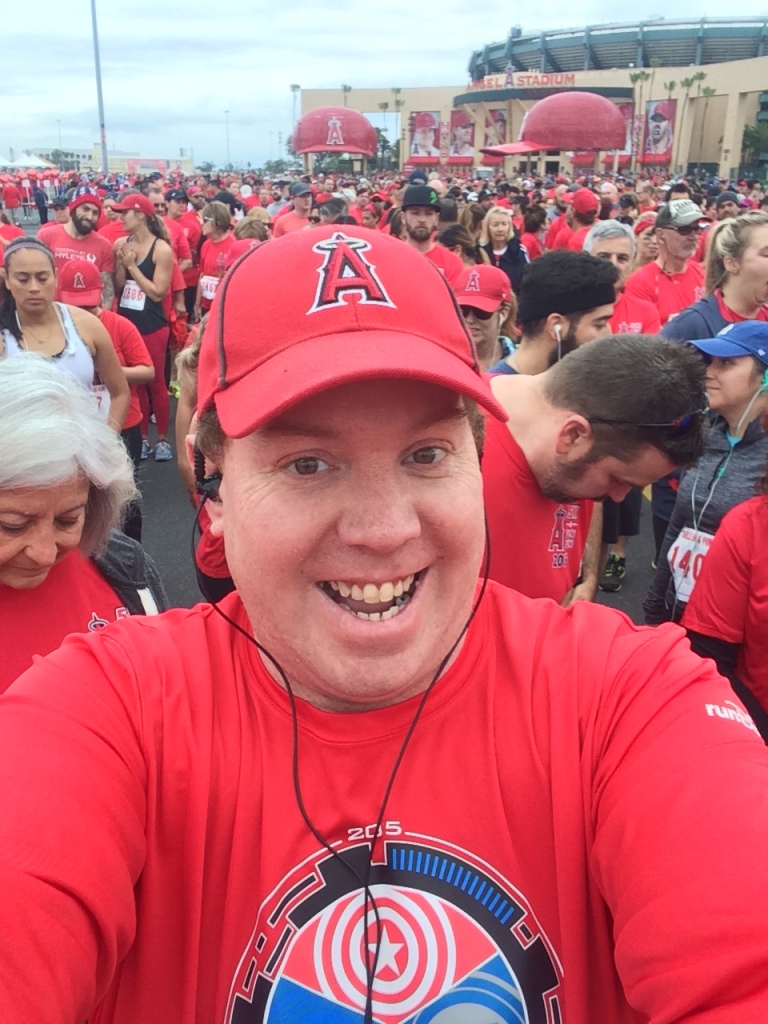 After an introduction of the president of the Angels Baseball Foundation and the national anthem, it was almost go time! I was super happy to get moving! 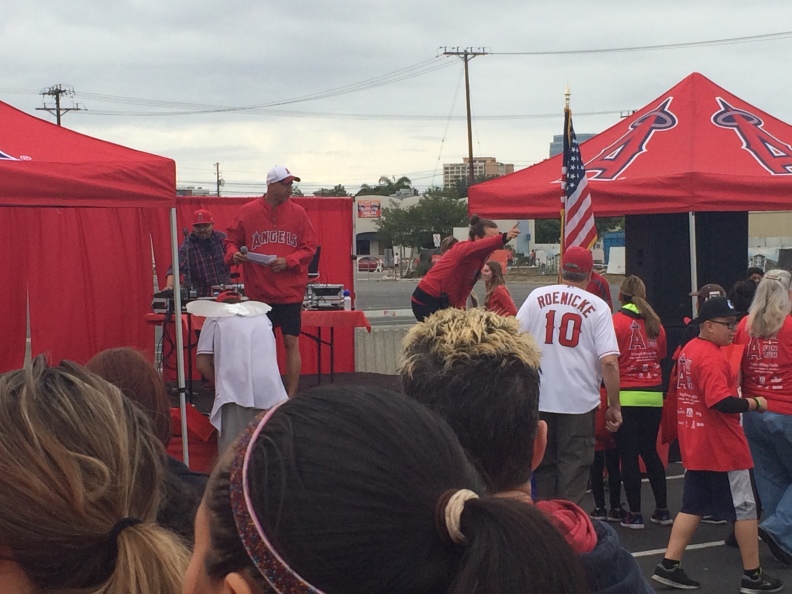 Rodger Lodge was the race MC for this race. He does the pre-game and post-game shows for the Los Angeles Angels on the radio. In case you were wondering who people were lining up to see…Angels pitcher Hector Santiago was on hand to wish us luck as we started. Some folks left the corral to get a pre-race pic with him. 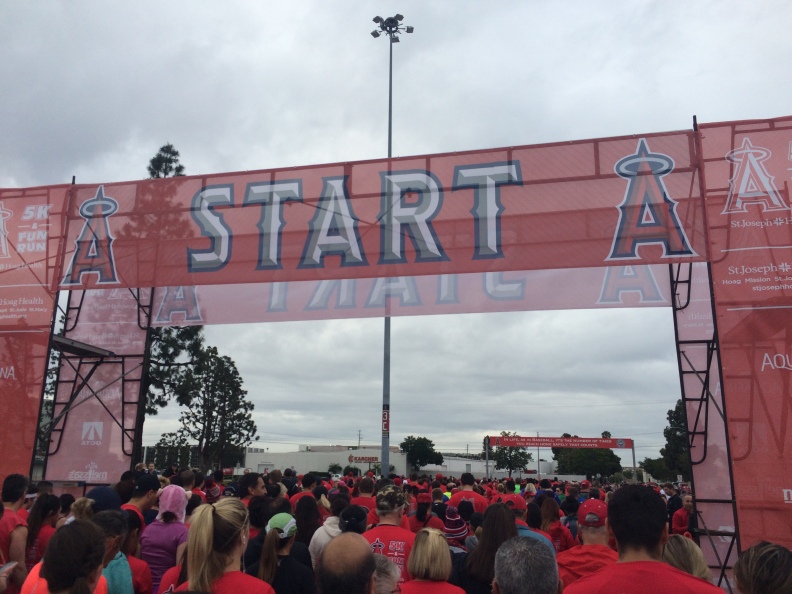 Of course, I was there to run a 5K. So, off I went! I hadn’t run in nearly 3 weeks. So, going into this race, I had zero expectations. This was a race to see how I could do. My plan was to run the first minute, walk 30 seconds and then settle into a run 30 seconds, walk 60 seconds for as long as I could hold on. I wanted to make it the entire race with this interval. However, if I needed to switch to a 90 second walk break, then I would. I started off running a full minute because of course crowding. I thought that if I switched it up for this one set of run/walk intervals, I could negate some of the crowding. After all, I’ve run this race before. So, I knew how it would be. 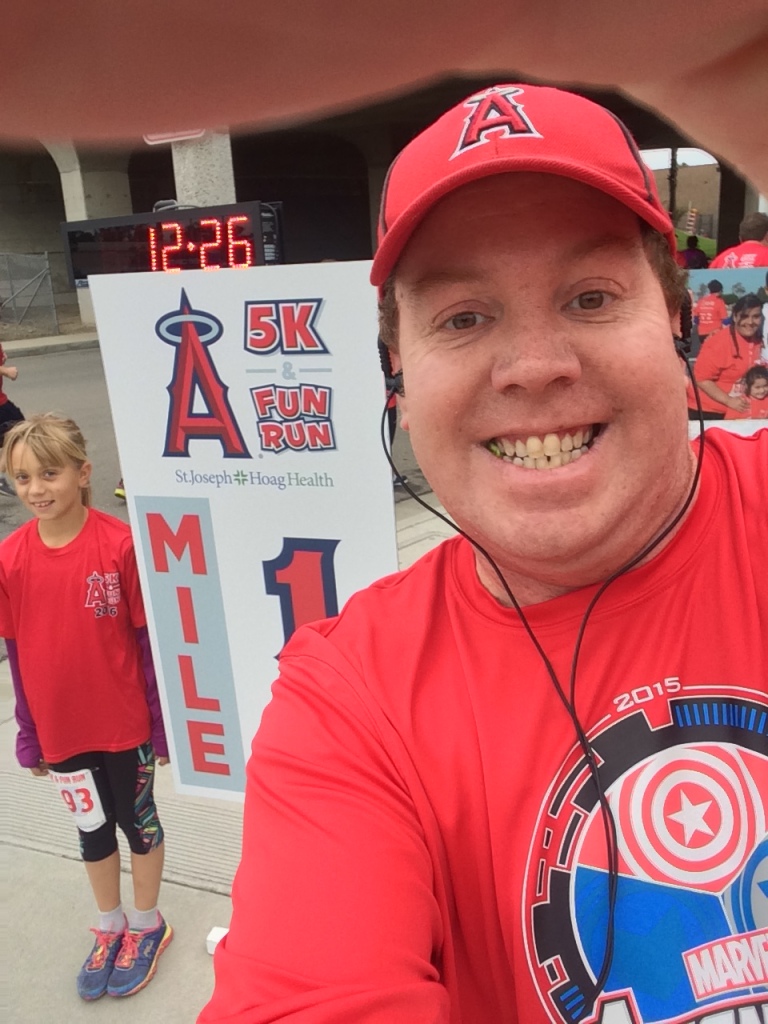 Mile 1 went really well. I reached the mile 1 marker at around 11:30! I also felt pretty good the entire way! It was a little bit of a tough decision to even stop for this picture. After all, I wasn’t really running for a time goal. But, I started so well that it was tempting to see how good it could be. I was actually pretty shocked that I finished so well. If you’ve run the Disneyland Half Marathon or the Avengers Super Heroes Half Marathon, you’d recognize part of mile 1. We ran up Gene Autry Way just like you do in each of these runDisney races.

Because I had such a wonderful first mile, I decided to run a minute, walk 30 seconds and settle back to the run 30 seconds, walk 60 seconds. I wanted to see if I’d get a similar result. In mile 2, the rain started. It wasn’t bad rain. It was more like a drizzle that went on and off for the rest of the race. Mile 2 was a little slower. I kept my intervals going and was quite pleased. However, my walk breaks were slowing down. So, at the end of mile 2, I was around 23:30. So, I had slowed a little bit. 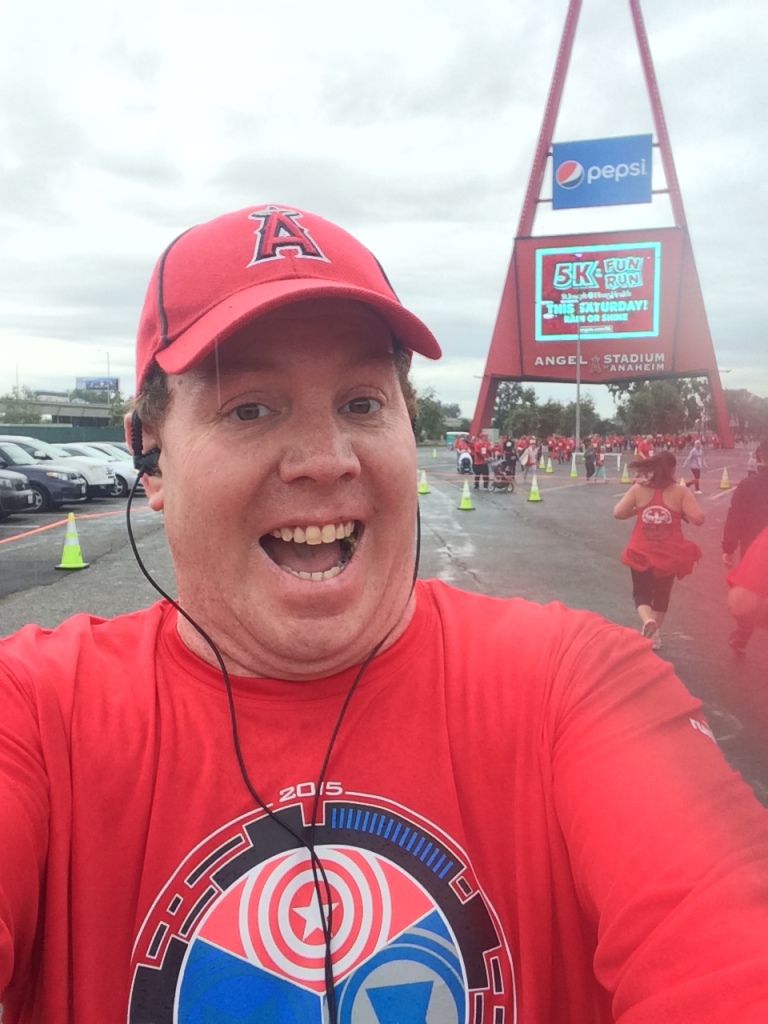 In mile 3, we wrapped around the Angel Stadium parking lot on our way to the stadium. I did skip the picture with the cardboard cutouts of Mike Trout and Jared Weaver. However, by the time I got close to the stadium, I decided to keep the fun going. A picture with the Big A in the background is a must! One reason, I decided to take more pictures is two fold. First, this is the only time I’ll be running through the Big A this year. Secondly, the 1 mile Kids Fun run merged with the 5K at this point, through the stadium and onto the finish. So, the course got really crowded. 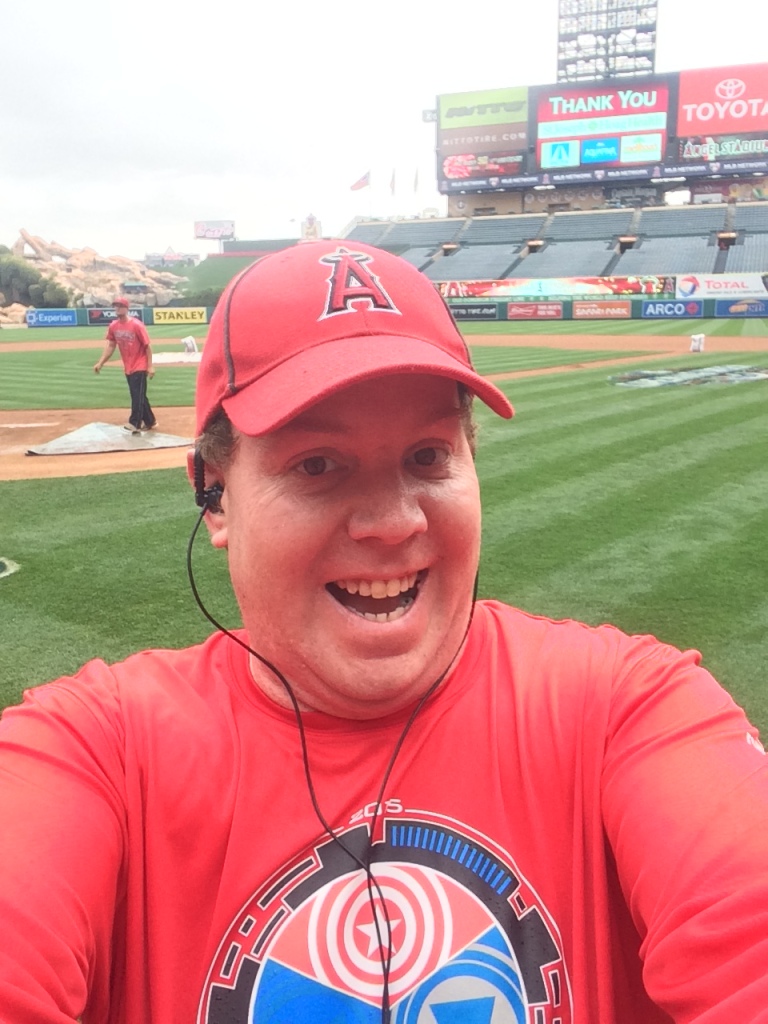 With the slow and steady drizzle, everything slowed as we made our way into the stadium. After all, there was a nice metal plank going down into the stadium that was pretty slick. So, I steered clear of that. I did cut a run interval short because of that. Once inside the stadium, I was right on a run interval. I ran all the way to home plate. Then, I had to stop for a quick pic. 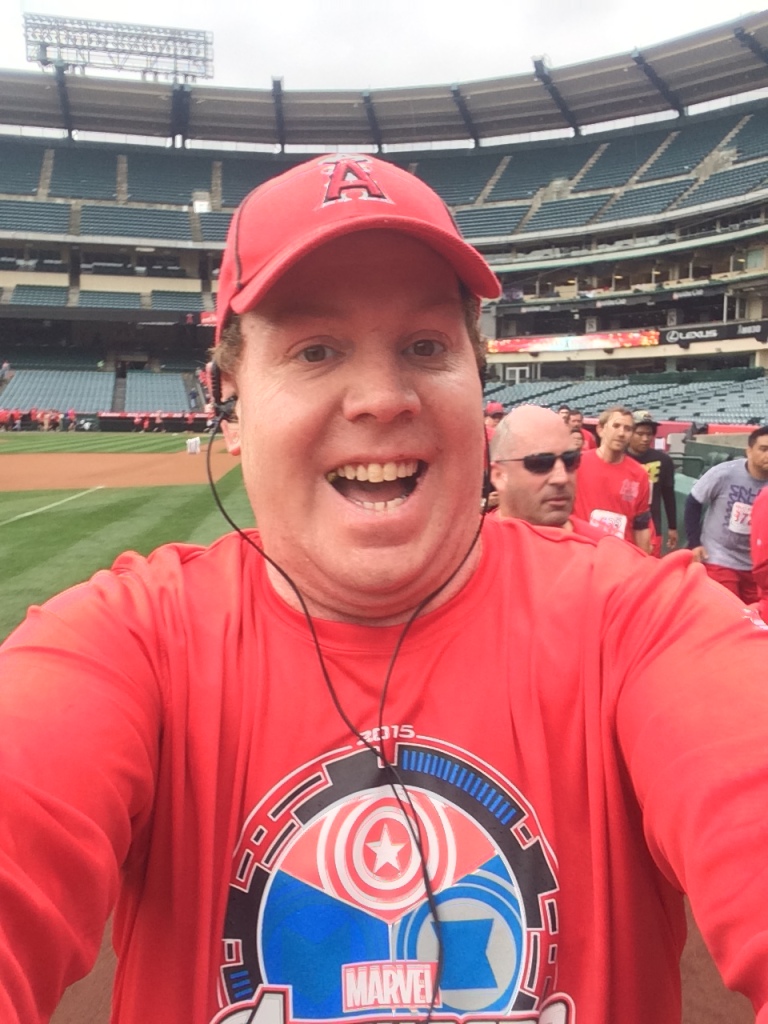 As I was on a walk break on the other side, I decided I needed another pic with the other runners in the background. As I got to the end of the left field warning track, I really wanted time to just stand still. I wasn’t going to finish mile 3 at the 36 minute mark. So, I debated a little with stopping for one last pic. However, I didn’t want to finish in 39 minutes. So, I kept going.

Once I got out of the stadium, I tried to come up with my finishing strategy. I extended a run interval a few seconds. But, once I saw the 3 mile marker, I ran all the way to the finish! 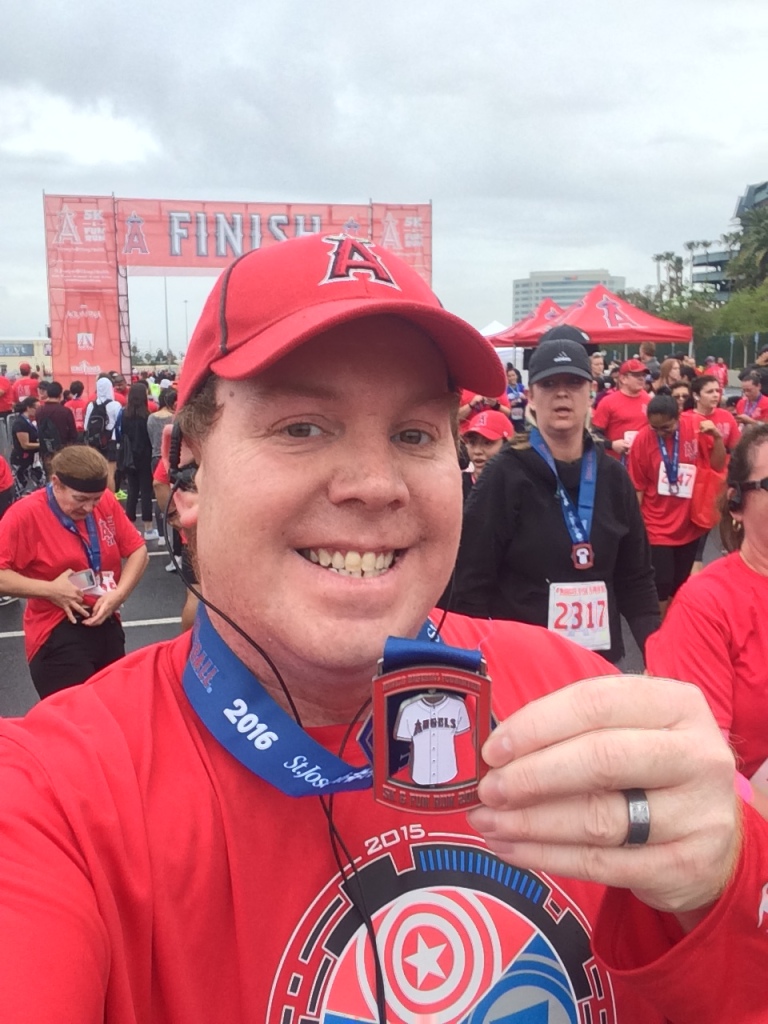 Another Angels Baseball Foundation 5K in the books! The finishers medal was pretty cool. It was a spinner Angels Jersey! My finish time was 38 minutes, 20 seconds. So, not too bad considering I hadn’t run in nearly 3 weeks! 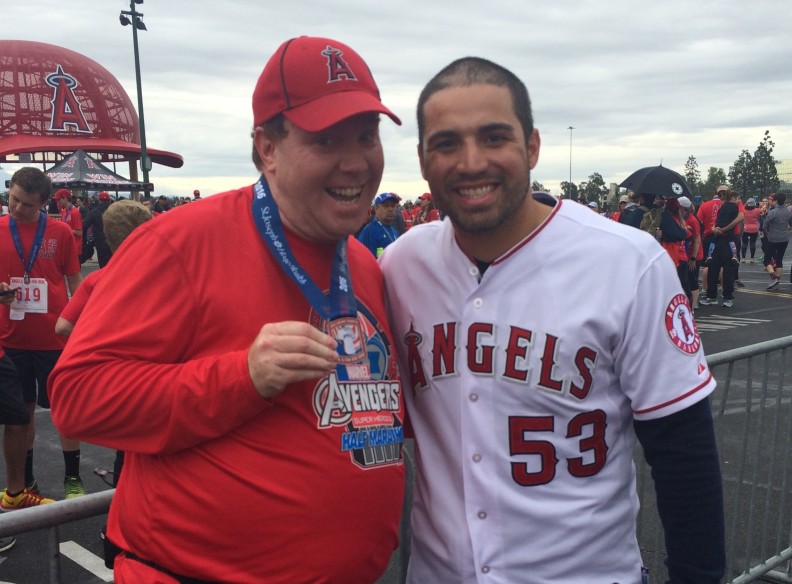 Once I finished, I saw this long line and initially thought it was to get the post-race food. Since I knew they had food on both sides, I bypassed the line initially. However, as I walked along, I saw that the line was for a picture with Angels pitcher Hector Santiago. So, I headed back to join the line. I mean, how many times do you get to meet a major league baseball player at the end of a race?!!! 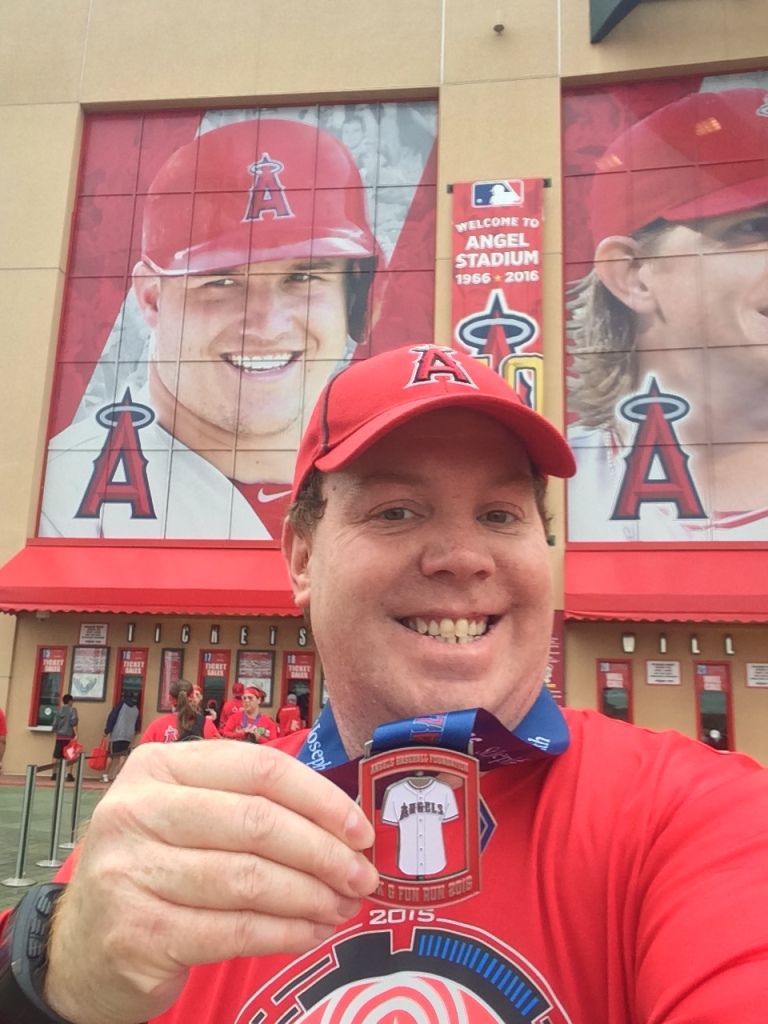 Of course, since I am an Angels fan, I had to take the new medal on a tour of the area. Mike Trout approved! 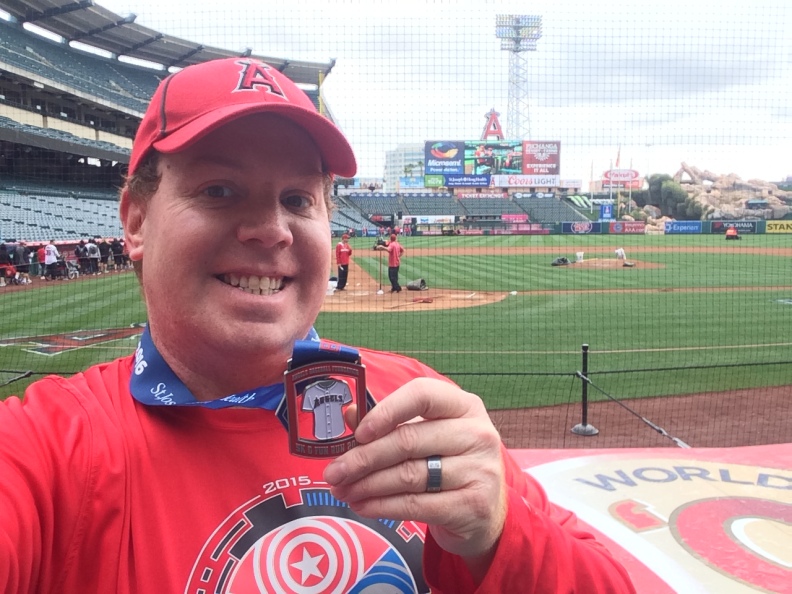 Then, I went into the stands to be in the seats I can’t afford. 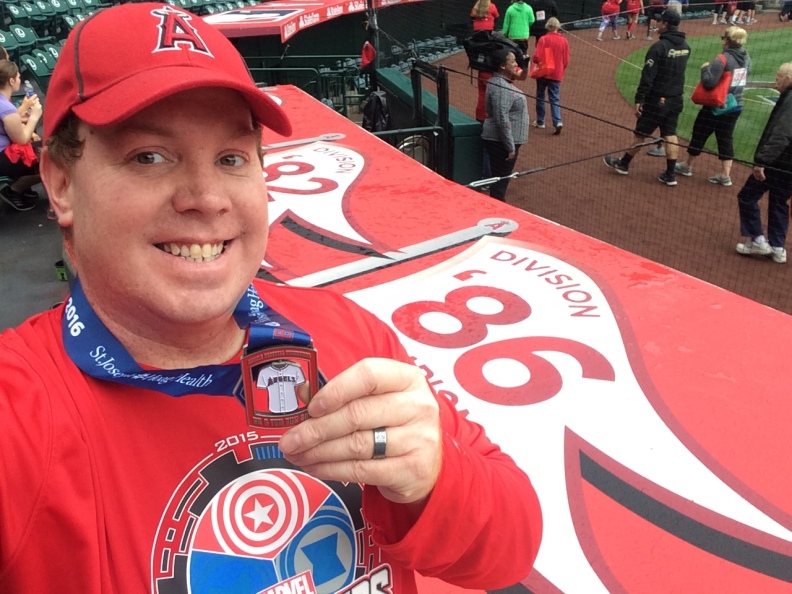 1986 Western Division Champions banner. I remember that year very well. I went to so many games that year (including the game where the Angels clinched the division and the 2 home playoff games the Angels won!). 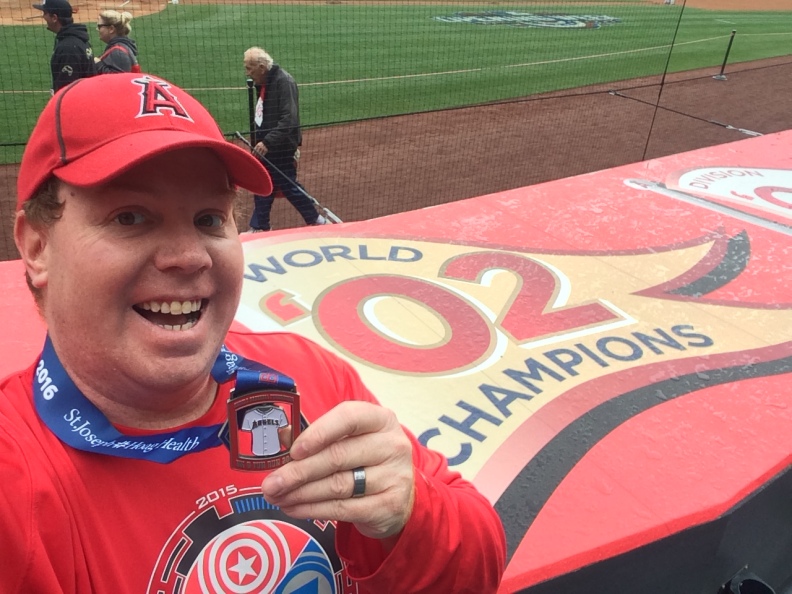 Can’t forget the one time the Halos won the World Series! 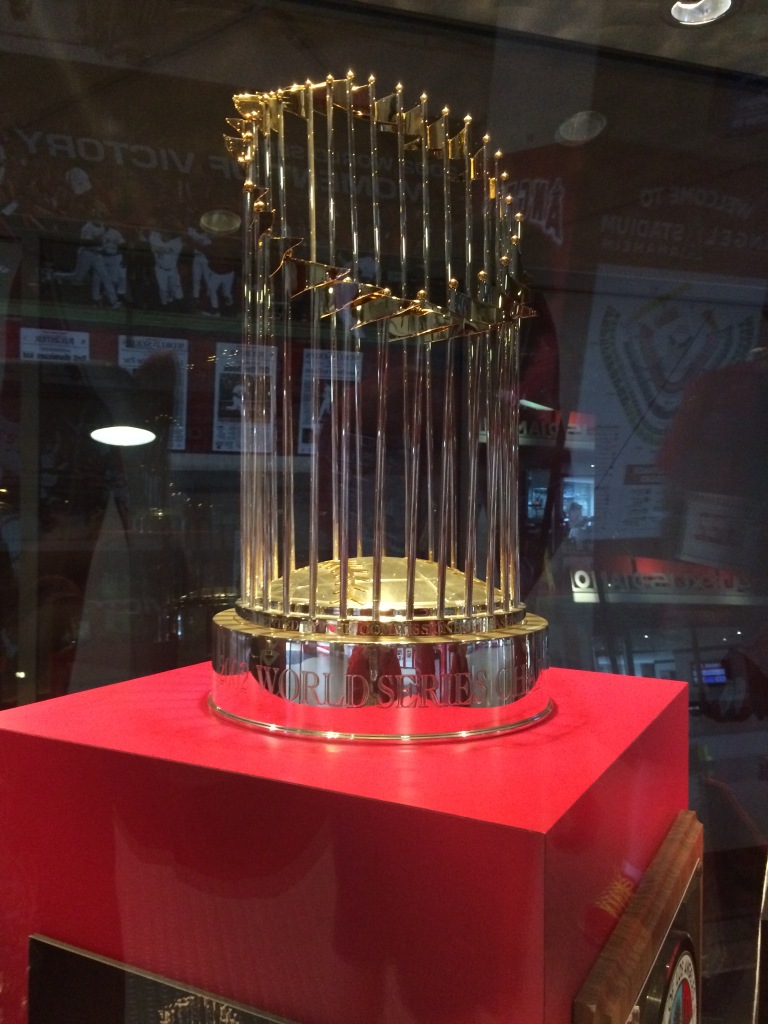 Here’s the World Series trophy! What a great year 2002 was! 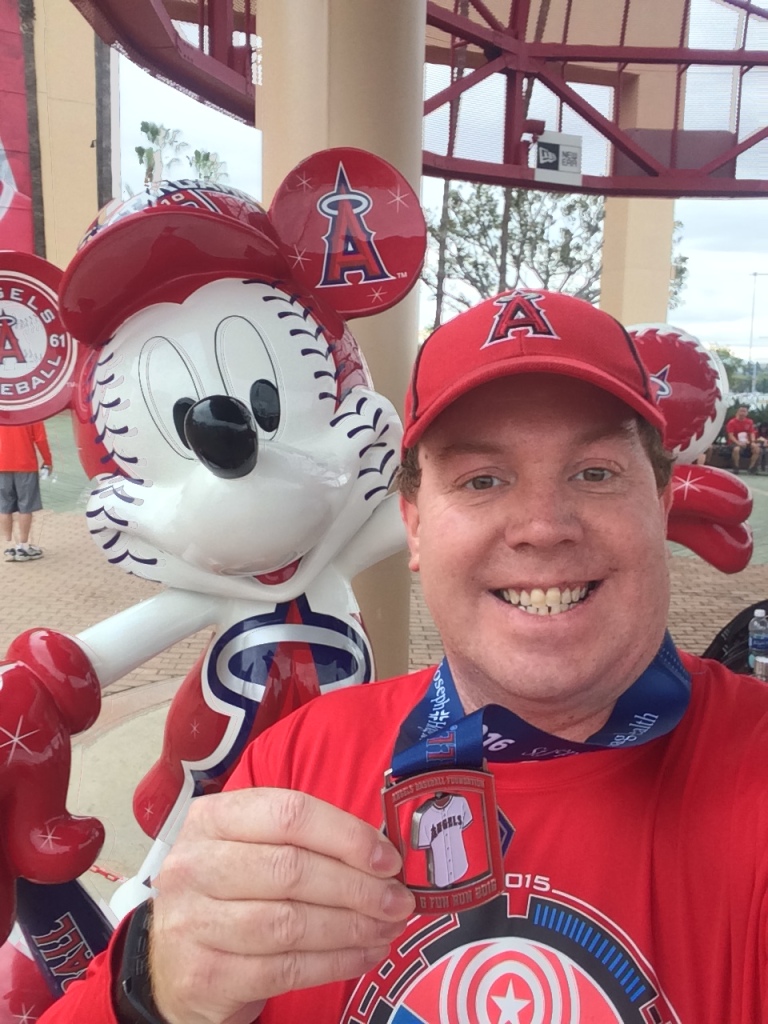 Of course, I had to finish it up with a quick pic with All Star Mickey. Here’s a fun fact…when the Angels hosted the All-Star Game, Disney had these Mickey’s made that commemorated each and every team in Major League Baseball. Now, each team has their own at their stadiums. This is the one for the Angels.

I had a blast running the Angels Baseball Foundation 5K! Will I do it again next year? Absolutely. The price is very reasonable for a 5K and includes a voucher for a ticket to an Angels game! You get to run through Angel Stadium. What’s not to like? If you’re a local, I highly recommend this race. One other incentive for me to run this race next year is that they are offering a special Mike Trout runner bobble-head for runners who ran the race this year and will run next year as well. So, you have to run both years. I can’t wait to get mine next year!