With the excitement over the Bank of America Chicago Marathon and Rock n Roll Los Angeles Half Marathon weekends, I wasn’t able to report when runDisney released the corrals, waivers, and official event guide. So, forgive me for the lateness of posting on this information.

Gotta love the cover for the event guide. Am I right? Ant-Man has been added to the rest of the cast. Still no Iron Man or Tony Stark. Oh well.

First thing on the inside is this fun picture. I love that it has the Disneyland 60th banners on Sleeping Beauty’s Castle.

First thing you should be aware of in the guide is the hours of operation for everything that’s happening. This is your one stop shop for all the hours. Everything from Expo hours, race starts, pasta in the park, awards ceremony, and even park hours is right here. For those that have never experienced a runDisney event at Disneyland, this would be a great page for you to keep handy.

The next section takes you through the Expo information. The Expo hours for each day are right at the top. The headline for this page is that each participant who is 18 years of age and older must pick up their own packet. The days of having someone else pick up your packet for you is over and has been for around a year at runDisney. Also, note that you cannot pick up your race packed on the race day. You must pick up your packet the day before your first race. 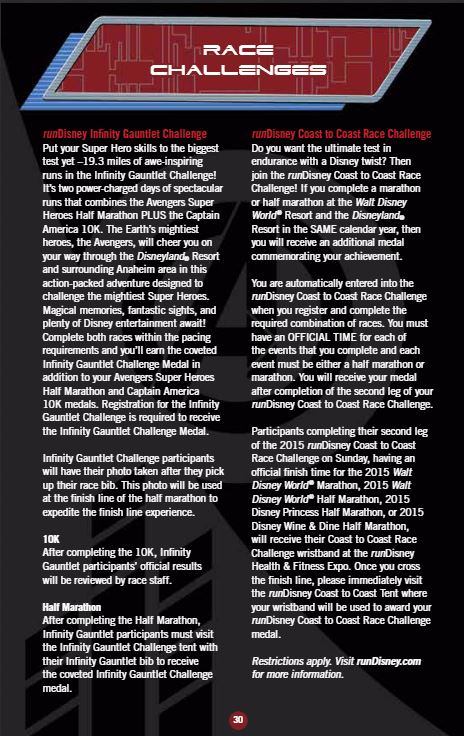 So, here’s the thing, runDisney wants you to go to packet pick up first. Here is a map of what to find once you get to the lower level.

With expo’s at the Disneyland Resort, you will go to the Disneyland Hotel. They always have a carpeted area with the event logo on it leading you down to the lower level. 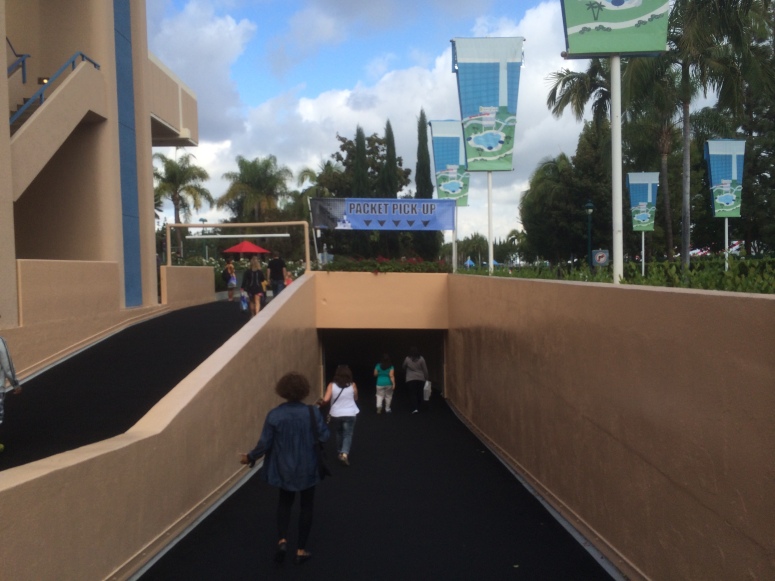 You follow the carpet down. As you can see there is a sign saying “Packet Pick-Up” and there will be Disney cast members to help direct you.

On the waiver, you’ll see your bib number next to your name at the bottom of the page. If you’re running the Avengers Super Heroes Half Marathon, you can find your corral assignment by using the above image. 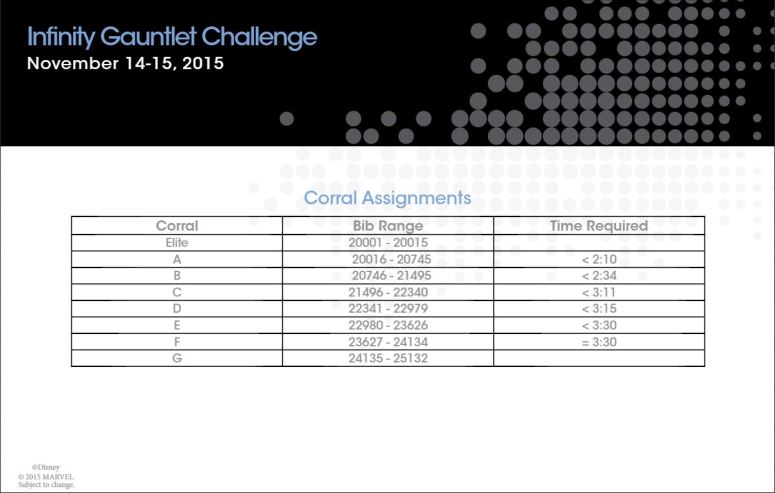 this guy, you’ll go to place in the finish area where they will match your picture from the expo to you standing there. On the computer it will have your Captain America 10K and Avengers Super Heroes Half Marathon times to indicate that you did complete the challenge.

Once you get done in the lower level – getting your race bib(s), photo for Infinity Gauntlet Challenge, wrist band for the Coast to Coast challenge, commemorative items that were pre-purchased, Dooney bags, GET travel stuff, Pasta in the Park tickets, Anniversary Party tickets, and chEAR squad items – you will head up to the upper level to pick up your race shirt. This is what it looked like last year. 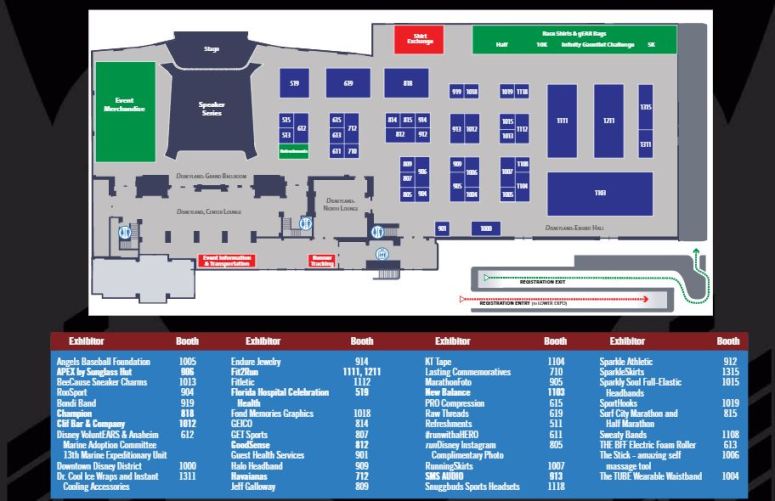 Once you get upstairs, you will enter right by the space to get your race shirts. This is the map for the main expo floor with a list of all the vendors that will be at the Expo. This is how runDisney wants you to approach the Expo. 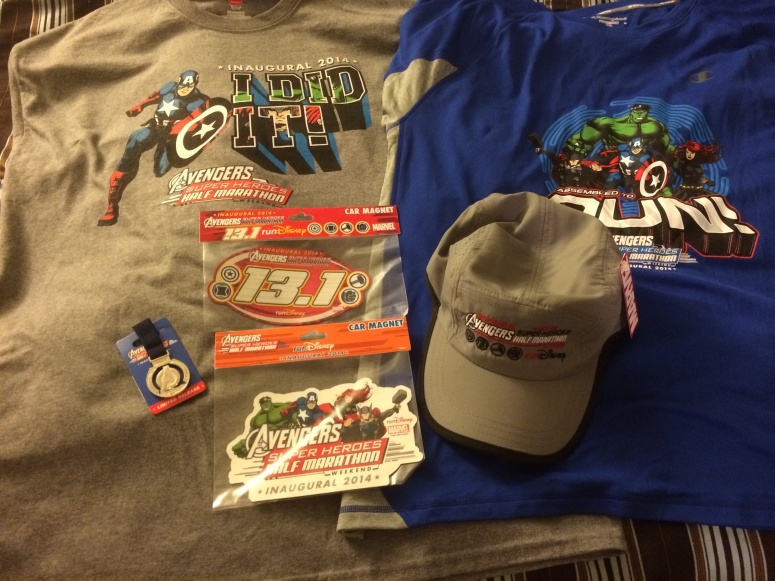 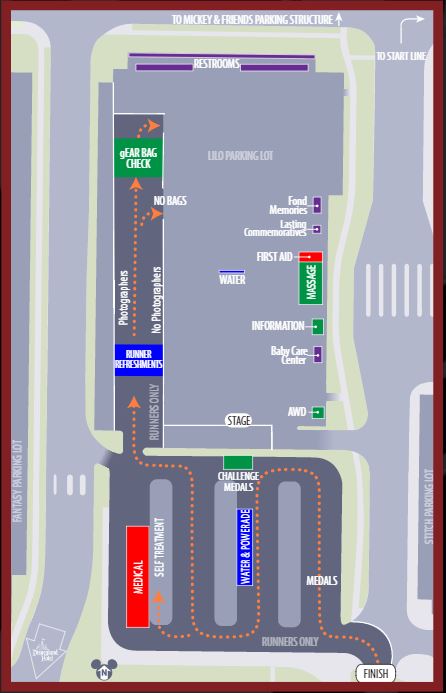 With the Expo covered, it’s time to look at the race information from the guide.  They bring up the finish area map first. The Avengers Super Heroes 5k, Captain America 10K and Avengers Super Heroes Half Marathon will all finish in the same spot. It’s important to note that only runners of the race that is going on are permitted in the orange dotted line areas. Once you get out of that area, you are in the family reunion area. So, this map might be a good thing to go over with your family and friends who have come to watch you race. Pick an area to meet up. With thousands of runners milling around and their friends and family, it’s not super easy to find people. Having an area to meet up before hand is the best idea.

Here is the map for the Avengers Super Heroes 5K. This race will be run on Friday morning. All of the races start and finish in the same spot. 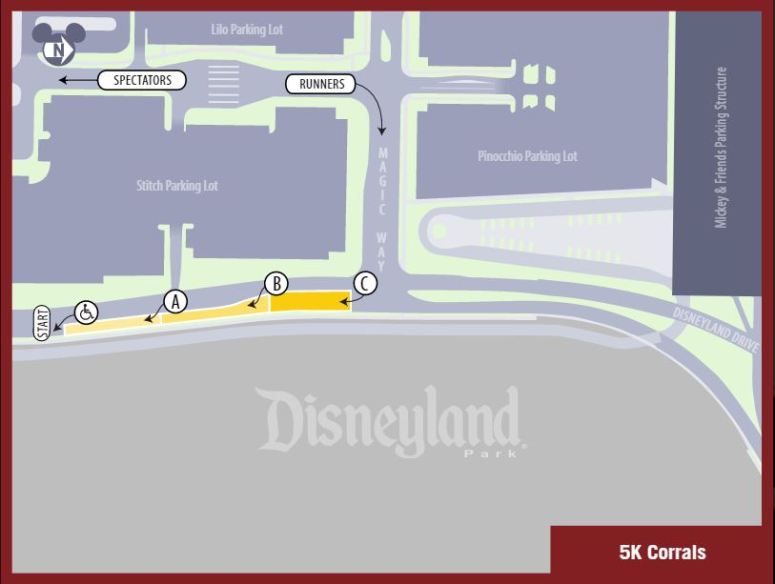 This is a map of the starting corrals for the Avenges Super Heroes 5K. Notice that there are 3 corrals. Your letter on your race bib is where you will be starting. If you are running with someone in a different corral from yours, it’s okay for your or your friend/family member to move back in the corrals. However, the person in the farthest back corral cannot move forward. Disney is pretty good about checking the corral on your bib to make sure you are in the correct corral.

Here is the map for the Inaugural Captain America 10K. If you’ve raced the Disneyland 10K race in the last three years, you’ve run this route before. Since I’m running the Infinity Gauntlet Challenge, I was really looking forward to seeing the route this new race would follow. As a fan of the Disneyland 10K route, I’m thrilled that I get to run it again!

Here are the starting corrals for the Inaugural Captain America 10K race. As you can see, the corrals go up through corral E. If you are running the Infinity Gauntlet Challenge, the letter that comes first on your bib is the corral you should be in for this race. Most often, it will be the same corral as you will be in for the half marathon.

The last race of the weekend is the Avengers Super Heroes Half Marathon. Here is the map for this year’s race. If you ran this race last year, you should know that it’s slightly different.

This is the map from 2014. Everything up through the first half of mile 5 is the same. However, we won’t be running by the Crystal Cathedral this year. Also, once we leave Angel Stadium, it will be a different finish.

Here is how the corrals will be lined up for the Avengers Half Marathon. There are two more corrals from the Captain America 10K. That’s why, if you’re running the Infinity Gauntlet Challenge, you might be in a different corral for the 10K and the Half Marathon. They seed us according to projected finish time. For this race, the second letter on your bib would be the one you’ll be running in for the half marathon.

I highlight this page with every race guide that runDisney puts out. I’ll continue to do it because I want to promote proper race etiquette. Be prepared for runners who don’t know the proper etiquette to be around you. Even though runDisney does an admirable job of promoting  correct etiquette, not everyone pays attention. I highlight this page because I want all of my readers to be educated and set the standard by which other runners will follow.

By the way, I want to make a few additions to what is listed due to my observations. It says that you shouldn’t run more than two abreast. This is a fabulous rule. However, I think a good addition to this is that you should pay attention to those around you. The rule about running no more than two abreast is to give other runners the opportunity to run around you if they are going faster. So, even though you may have no more than two abreast, make sure that you aren’t going to line up with another group of two. The reason? That creates four abreast on the road. So, if you are in a group that has two across, look around you. If you think you’ll quickly pass by the other group of two you are coming up on, no worries. If you think it might take you some time to pass them, either slightly speed up to get around them, or slow down and stay behind them. Of course, if you don’t see people who might want to pass you close by, it would be fine to line up with the other group of two for a little bit. Just keep in mind how frustrating it would be for another runner who is going faster than you guys to pass you if there are more than 2 abreast. I hope that makes sense. It’s one of my biggest pet peeves about races. You have one group that is following the rules and another that is also. They aren’t thinking that they are combining to make a larger group and it causes people behind them to be rather frustrated. 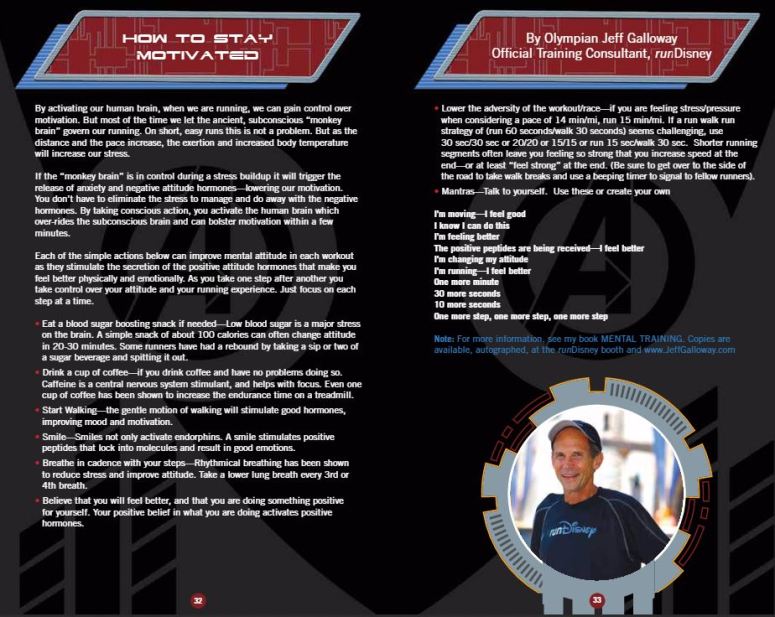 Almost done with what I am going to highlight. Jeff Galloway has some really helpful tips that you should check out. Jeff is not only a seasoned marathoner and running coach, but is such a helpful person. He offers these golden nuggets of information free of charge. On the second page are some mantras you can try out while you’re running. If you look at them before race day, you can try some of them out on those last training runs.

Lastly, I want to highlight all the social media information for this race. Especially the hash tags. You should start following them and using them in these final two weeks leading up to the race. I guarantee others are using them as they train for the races.

Oh, I almost forgot. There is an iGiftbag as well. You can access that by clicking here. As you can see in the image above, there are lots of fun things in there.

The first item I want to highlight is the Lasting Commemoratives bookmark. Something that is FREE should not be overlooked. This is located among the “Coupons and Offers” part of the iGift Bag.

For those that want to mark the occasion of running the Avengers Super Heroes Half marathon Weekend raced with a shadow box, FMG has you covered with a special savings.

The last thing in the “Coupons and Offers” is this 15% off coupon at the ESPN Zone. I love the ESPN Zone! If you do as well, this is a savings you might want to keep in mind. 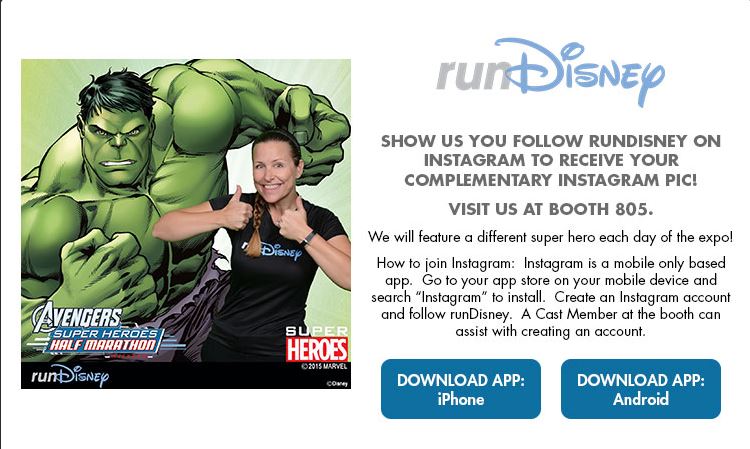 Lastly, I wanted to highlight the FREE Instagram image you can get. Make sure to follow runDisney BEFORE race weekend and you’ll be all set up for this free photo. 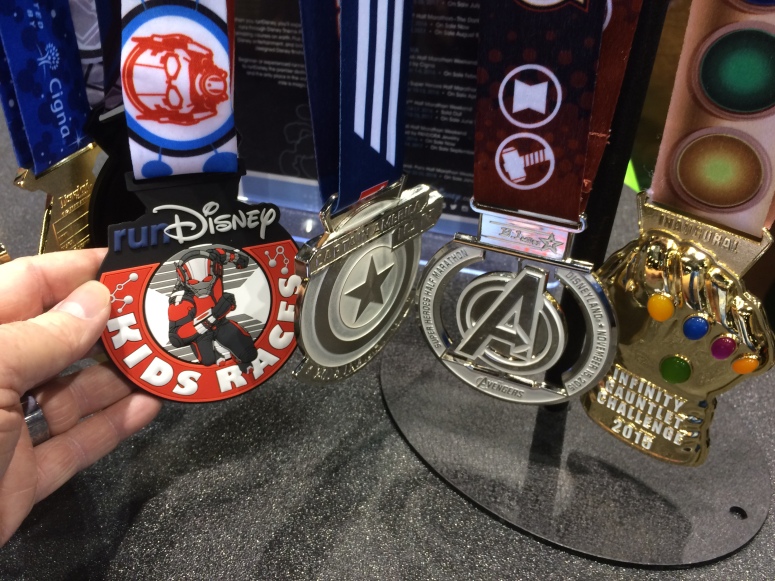 That’s all I have to highlight for now. Sorry this was so long. I do encourage you to check out the entire race guide as there is a lot more great information. I highlighted what I feel like are the most important parts. Hopefully, this was helpful. It’s almost time for the runners to assemble at the Disneyland Resort to run the Avengers Super Heroes Half Marathon Weekend! I can’t wait!

2 thoughts on “Avengers Super Heroes Half Marathon Guide and Corrals”