Now that I’m in the fall, Monday nights are Disney Employee Choir practice nights for the Disneyland Candlelight Processional. Tuesday, I headed out for my first mid-week training run since the marathon. I felt tired at the start of the run. I’m finding that recovering from the Chicago Marathon to take a little longer than my previous marathons. But, in spite of the tiredness, I wanted to get out and get back to those mid-week runs. I started this like all other 4 mile, mid-week runs. I ran 30 seconds, walked 90 seconds for the first mile. Then, I switched to a 60 second walk in mile 2. During my taper, I kept the marathon intervals going to aid in recovery and keep my legs fresh for the marathon. Now that Chicago is in the rear-view mirror, it’s time to get back to regular mid-week runs. Mile 1 went okay. I always like it when I can finish the first mile in less than 12 minutes. This time it was only a few seconds faster. I actually thought I’d be over 12 minutes while I was out running. So, coming in under was awesome. I always seem to question whether switching to a 60 second walk break is a good idea. Tuesday was no different. However, I went for it. Like always, it turned out okay. I didn’t make up as much time as I’d like to in the second mile. However, I was okay with that. So, I kept the walk breaks at 60 seconds for miles 3 and 4. It was a bit of a tiring run. However, I finished in under 47 minutes. So, that was a good sign.

Wednesday was a rest day from running. However, it ended up being a day to finish cleaning the apartment before our home inspection on Thursday morning. Cleaning the bathroom was quite the workout for me. On Thursday morning, I was so sore. It continued throughout the day. I was completely exhausted by the end of the work day. So, I skipped the run. I didn’t want to be worn out on race day. Not only was a worn out physically, but emotionally as well. These annual re-certifications are the big-time reminder that Brooke and I remain a family of 2 hoping to be a family of 3.

On Friday, it was laundry day.

Saturday was Rock n Roll Los Angeles Expo Day! This would be my second race expo in three weeks!

Disappointed would be big understatement with how I felt about this expo. I’ll write more about it later. However, everything about this expo was small. Look at all the unused floor space. When I ran this race two years ago, it was a much larger expo.

All was redeemed for my expo day with the We Run Social meet-up. The people who are in this group are super awesome! If any of you want to join, it’s really simple. Follow We Run Social on Instagram, Twitter, and/or Facebook. Use the #werunsocial in your social media posts and you’re in. There are literally people from all across the country who are part of this group. Brian, who writes the Pavement Runner blog, is the main person behind this group. After meeting up and getting this picture with the Magic Johnson statue outside of Staples Center, we headed off to the Yard House for some food, drinks and socializing. I mean with the name We Run “Social” how could we not? 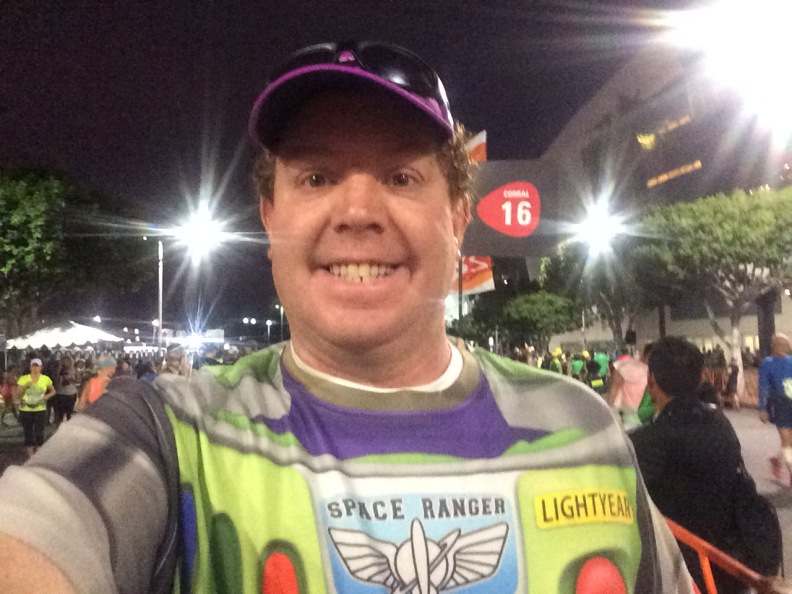 Sunday was the day of the Rock n Roll Los Angeles Half Marathon! I put on the old Buzz Lightyear outfit I wore at the 2014 Walt Disney World Marathon. It was supposed to be sunny and warm. So, wearing as much light colors seemed like a good idea. Also, the race was Halloween themed.

Two years ago, when I ran this race, running around the Los Angeles Memorial Coliseum was the highlight of the course. 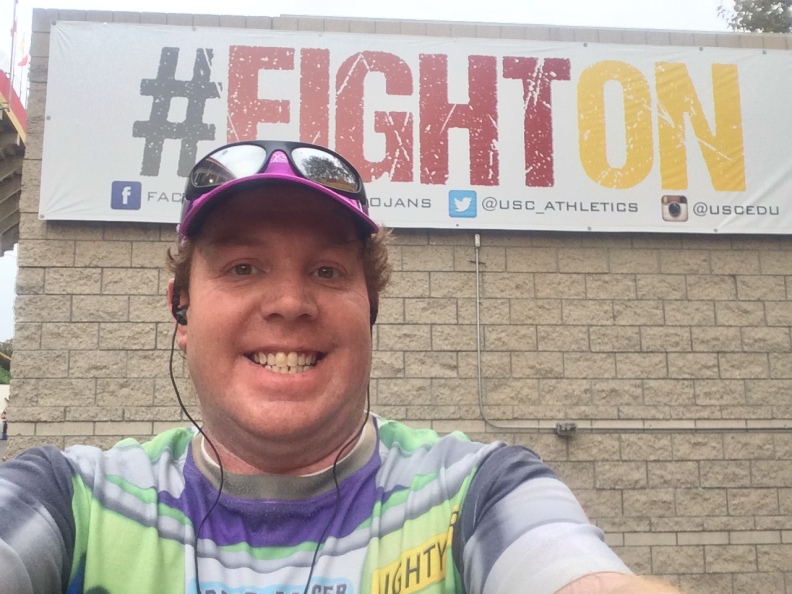 As a USC Trojans fan, I love getting to be at their stadium….Fight On!

One of the cool things about running around LA this time around were all the murals on the sides of buildings. This was my favorite one. It came in mile 6 (I think). 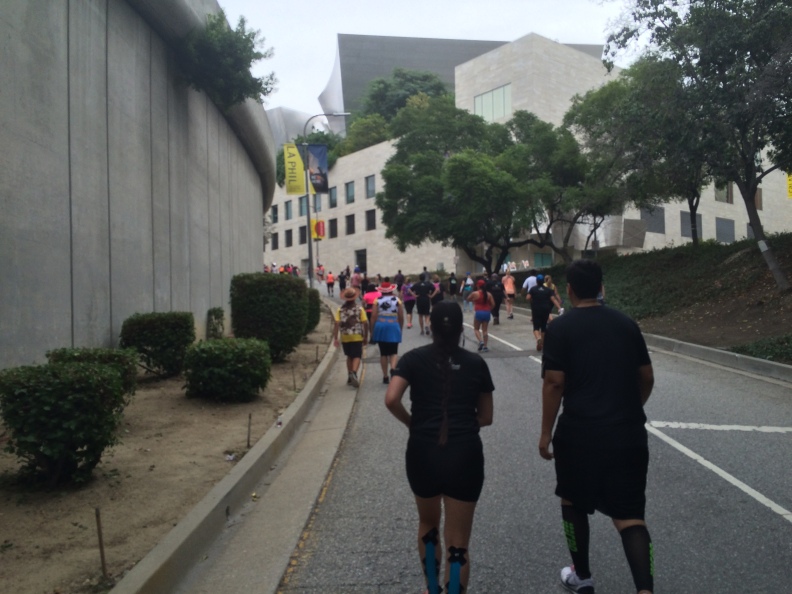 I will talk about this more in the race recap. However, the hills in the second half took it out of me big time! This one was in mile 7 or 8. (Side note…there were a lot of missing mile markers in this race) The course for this year’s race was different from what I remember of the course in 2013. We did not have this hill. 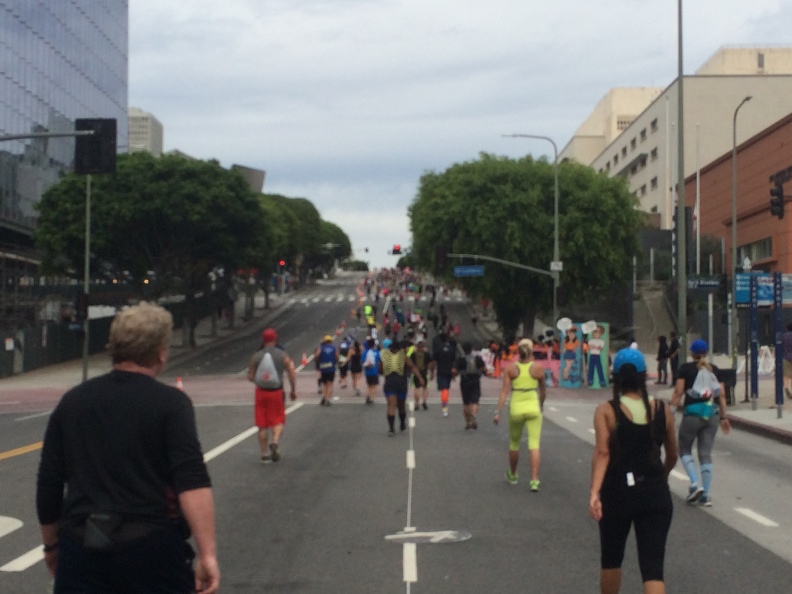 As if the killer hill in mile 8 weren’t bad enough, on the other side we ran down this hill. In mile 12, it was up, up, up and more up. Not cool! I think we covered more of this hill for Rock n Roll Los Angeles than we did for the Los Angeles Marathon. Plus, we didn’t have the cool Korean Drummers to help us get to the top.

The RnR Los Angeles Half is essentially, two out and backs. The fun part of that is I get to see some of my speedier friends as they are on the other side of the street. Here’s my friend Linzie (who will be running the New York City Marathon this coming Sunday as an Asics Ambassador!).

I also got to see Carlee and her husband on the course. Both of these peeps are super speedy. I could never keep up with them.

At the end of the race, I was glad to be done! This wasn’t close to being a fast half marathon for me. However, it wasn’t my slowest half marathon either. I finished in 3:08:32. As I will talk more about in the recap, this is really a tale of two halves. The first half of this race is rather flat. There is a slight decline in the first 3 miles and then a slight incline over the next 6 miles. That’s the first out and back. The second out and back  featured some crazy hills. I ran and I walked and wished the last hill had an escalator. But, I made it to the finish! That’s what matters. Buzz Lightyear completed his mission. I finished my 15th half marathon! Up next? Avengers!