With me being in Chicago for the marathon, I’m having to do these posts in a crazy order this week. So, I wanted to get a quick post to recap the week that lead up to running the Bank of America Chicago Marathon.

On the Tuesday before race day, I wanted to keep things light. It was the last week of tapering and I was still concerned with the twinge in my lower calf. Since one of the reasons this occurs is over working it, there was no need to continue to work too hard. I ran my marathon intervals for the entire 4 miles in this run. It was a rare cool evening. Well, cool in comparison from the weather we have had since July. Apparently, cooler temps work well for me. I got off to a fantastic start with a first mile in the typical 11 minute, 45 second variety. In previous weeks, the second mile, I’d switch up the intervals and gun for a great time. So, it was surprising to me that the time in the second mile went so well. I was running great and feeling strong the entire way. At the end, I felt good and strong. The calf didn’t give me problems. It was a fantastic run for me!

I took Thursday off from work to get some things done in preparation for my trip to Chicago. So, I decided to start the day with a 4 mile run. The temps were going to be higher than my previous run. So, I knew I had to get up earlier than I would have liked to make this run. Though you can’t see the  stats from the photo, this run was much slower than Tuesday’s run. I kept the same intervals as I did on Tuesday for the same reasons. I did not want to take any risks this week. The marathon loomed over every decision. I knew that this run wasn’t going to be as good right from the first mile, I finished the mile in just over 12 minutes. That’s slow for me. However, I wasn’t concerned. I just wanted to get the miles in. Mile 2 went better but was still slower than usual. It is interesting how much different it is running this route in the daylight vs. at night. I finished with an average pace of 13:22 per mile. Not the best, but I was done with training for this marathon cycle. All that was left was to fly to Chicago and run the race!

On Friday, I was up early and off to LAX for my flight to Chicago!

On the way, I made sure to watch Spirit of the Marathon to get me inspired! 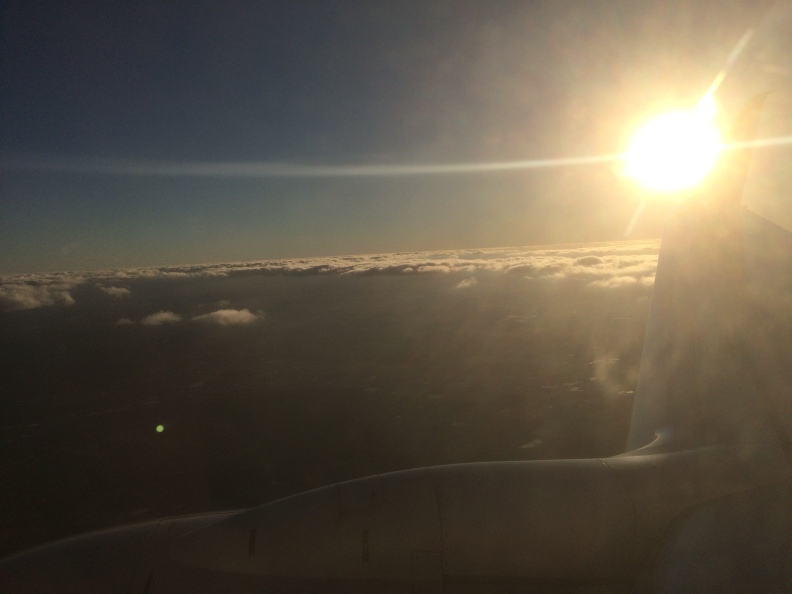 I arrived just before sunset. It’s kind of cool to see the clouds up close and personal! 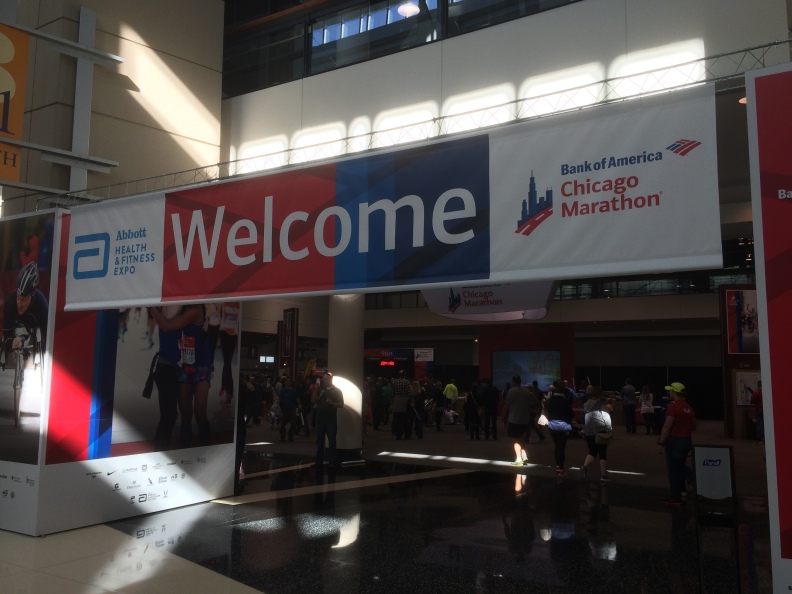 Saturday was Expo Day for the Bank of America Chicago Marathon! I’ll do a full blog post on the Expo later. For now, let’s just say that I was blown away at how huge this expo was. It was like Christmas for runners! All the displays were larger than life!

I even got to see the Infinity Gauntlet Challenge medal in person at the runDisney booth!

Much like the Disneyland Half Marathon medal, this one is much cooler in person than it is in pictures.

I was all set to #ownchicago the next day!

I didn’t get to spend a lot of time at the Expo because I had a lunch to get to with my fellow Holt International/Adoption-Link charity runners. It was so great to meet the team and chat about running and adoption related things. The guy leaning over next to me was among the elite runners for the marathon. I think he ended up finishing the Chicago Marathon in around 2 and a half hours!

It took longer than expected for me to get to the start line. I think it took longer than the race organizers thought as well. According to the race program, they were estimating that it would take 15 – 20 minutes to clear each wave. There were corrals A – K that were grouped into 2 waves. I didn’t start until 8:32am.

I did have fun running the streets of Chicago and seeing all the different little communities that make this city what it is. I didn’t know tons about the city. So, the above pic is one of the few landmarks I knew about on the course. I will write up a proper race recap later.

As I mentioned last time, it was not the race I had hoped for. Although, it was pretty close. If not for a couple blisters that decided to pop in mile 22, I might be writing about a new marathon PR. Instead, I finished in 6 hours, 36 minutes, 40 seconds for a new second fastest full marathon time. It was 6 minutes, 40 seconds slower than the max time allowed by the Chicago Marathon to be listed as an “official” finisher. However, I did finish the race. 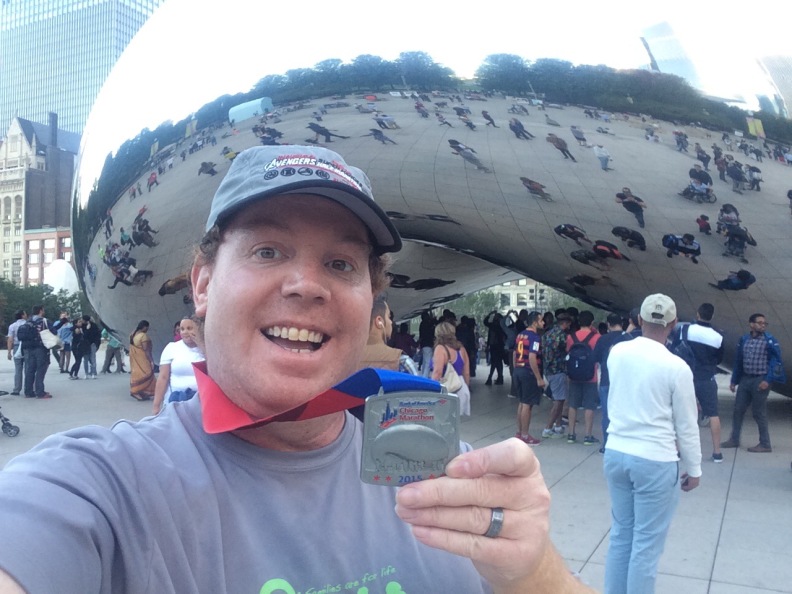 After lunch/dinner at Giordano’s, I headed to the Bean in Millennium Park to take a pic with my new medal. It’s kind of cool because the Bean is on the finisher medal too! Get it? Finisher medal with the Bean in front of the Bean.

So, the year of second bests continued this week with my second fastest marathon finish. While I’m not an official finisher, I did finish the race and am proud of it. After all, by the end of mile 24 my fate as an unofficial finisher was sealed. Once the blisters popped, I had a lot of thoughts of quitting the race. After all, even back then, I couldn’t see myself crossing the finish in less than 6 hours, 30 minutes. I didn’t know that they would give out medals at the finish. So, was it worth it? Every time I asked that question, the answer came back with a resounding…YES! So, I kept moving forward…one step at a time. At the end of the day, the blisters were my big problem. The temps weren’t too bad. The wind helped keep things a little cooler. By the way…notice the Avengers Super Heroes Half Marathon had I’m wearing? As windy as that race was, this one was windier. Every big gust of wind made me laugh because I was wearing the hat of the previous race I had finished in similar conditions.

By week’s end, I became a marathon finisher for the 3rd time! I’ve been trying to process that all week long. Only about 1 percent of the population will finish ONE marathon and I’ve finished THREE!