Do you all remember what happened the week of the Los Angeles Marathon?

There was a huge temperature spike a week before the race. Guess what happened today?

The race day forecast is calling for a high temperature of 76 degrees and sunny. What was the forecast just a few days ago?

So, it’s gone from a high of 67 and partly cloudy to a high of 76 degrees and sunny. This is NOT good news. I’m a back of the pack kind of runner who will be start in the very last corral. If I’ve read the information correctly, the race essentially starts in two waves. The first wave starts at 7am. The second wave starts at 8am. They estimate that each wave will take 15 to 20 minutes to clear. So, at the very latest, I’ll be off and running by 8:20am. There is a 6 hour 30 minute time limit to be an official finisher of the Bank of America Chicago Marathon. Which means that everyone has to finish in that time allotment. Even if I were in Corral A, I’d have to finish in that time to be an official finisher. I’ve got to think there would be finisher medals for folks that finish before they close off the course. However, they won’t be counted as an official finisher. That’s pressure for me. My PR is 6 hours, 21 minutes, 45 seconds. I ran the Los Angeles Marathon in around 6 hours 55 minutes or so. That means, I’ll either have  PR, a second best marathon, or I won’t be among the official finishers. Kind of crazy. This is why the extra heat is not good news.

I was looking forward to running with temps that would peak in the mid 60’s. However, I’ll get temps in the mid 70’s. There are a few ways of looking at this. I’ve been training all summer long in much warmer temps. The bad of that, though, is that I’ve had some trouble with the high temps. My 20 mile training run came on a day where the high temperature was 100 degrees. The run started at 5:30am with a temperature of 75 degrees and ended with the temps in the upper 80’s. My time was slow as I suffered in the sun. 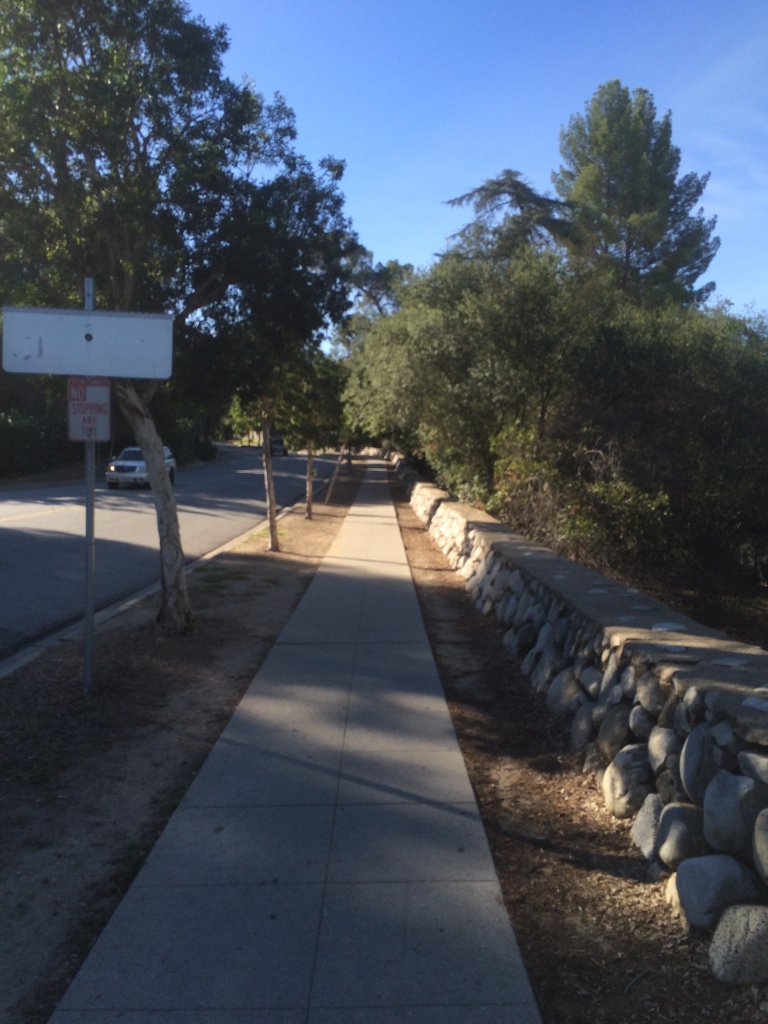 The good news? I won’t face a hill in the whole marathon that’s as bad as this one I’ve run several times in this training cycle. This picture is just the base of a half mile climb out of the Rose Bowl. It’s not fun to run up. 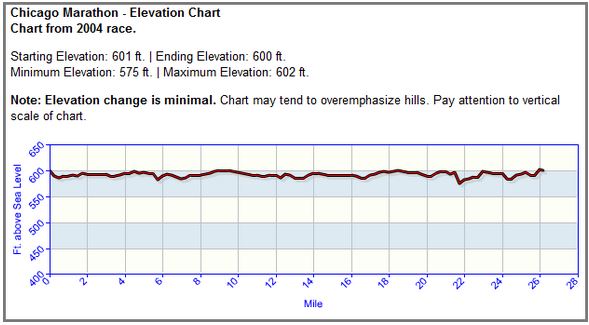 This is the elevation chart for the Chicago Marathon. From what I’ve read, the course hasn’t changed too much over the years. It’s a rather flat race. That’s good. I’ve also read that the first 13 miles has tons of fan support. So much so that it would be really easy to run too fast at the start and pay for it later. All the advice I’ve read mentions how important it is to slow yourself down in the first part of the race. There will be an estimated 1.7 million spectators for this race. While we’re in and around the main part of Chicago, the crowds will be crazy. That’s the good.

I’ve watched a few videos of the course. This video captures it best. I know that it’s from a year where LaSalle Bank was the sponsor. However, the course seems exactly what I’ve seen of this year’s course. If you watch the video, you’ll notice that the course does have some ups and downs. However, it’s still pretty flat. From the elevation chart, I can tell that mile 23 will be the most difficult elevation wise. Then, there’s the climb at the end of mile 26 that is difficult because of where it is located. 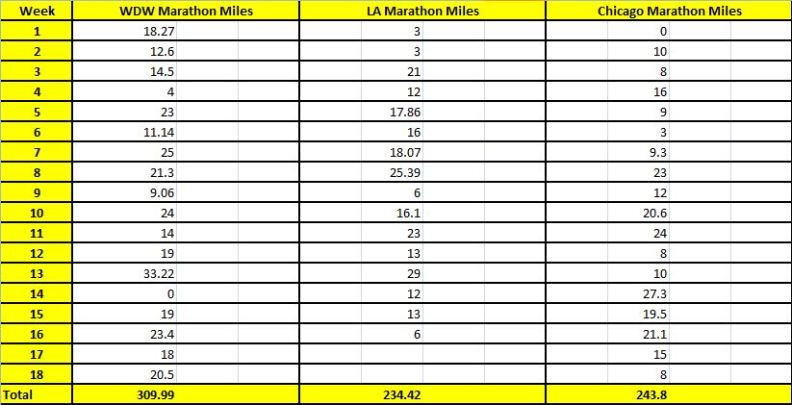 Last weekend, I had a chance to chart out my performance in my three marathon training cycles. As you can see, the news for this cycle is not all bad. I had two more weeks than I had to prepare for the Los Angeles Marathon and ended up with around 8 more miles. Clearly, my training for the Walt Disney World Marathon was much better than either of the next two. My focus was much stronger over the course of that training cycle. In all of the cycle, though, I had good weeks and bad ones. I had good training runs and bad training runs.

In enter this marathon with a lot of question marks. I hope I get to the finish line with either a new marathon PR or at least a new 2nd fastest time at 6:30:00 or faster. 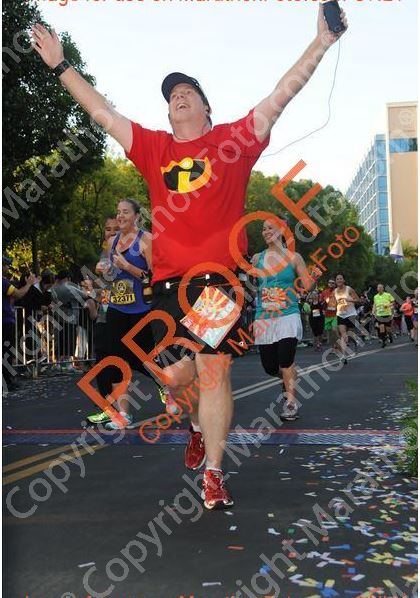 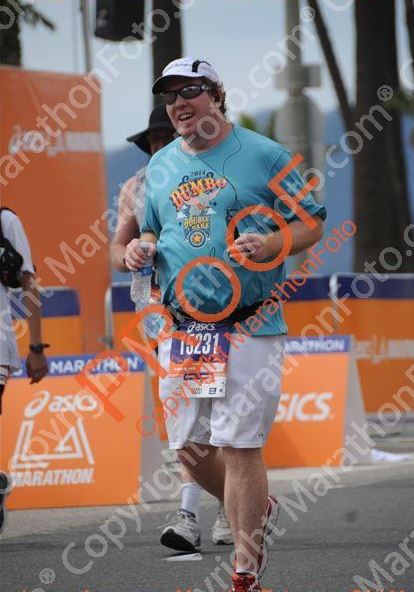 I’m really hopeful that I will best my finish time at the Los Angeles Marathon.

Who knows? Wouldn’t it be amazing if I were able to somehow best my 2014 Walt Disney World Marathon time? No matter what happens, I’m going to give it my very best effort and let the time be what it will be. The goal is to get to the finish line. Tomorrow, I’ll talk about some of my plans for race day. Also, tomorrow, I will be flying to Chicago!

Oh, I almost forgot…I’ve raised more than the minimum I needed to raise for Holt International and Adoption-Link! A big HUGE thank you to those of you who made a donation to these wonderful adoption agencies! To those that didn’t but still want to contribute, you still can. There is a link in the right hand side of this blog that you can click on to make a donation. The Crowdwise fundraising page will be active through Halloween. So, you can make a donation at any time between now and then. I’m just thrilled to have reached (and exceeded) the minimum I needed to raise to run this race. Running as a charity runner is something I’m still processing. I get to meet the rest of the team on Saturday. I can’t wait!

3 Replies to “Dejavu All Over Again”