So, the big news in the runDisney universe on Tuesday morning was the announcement that runDisney will host a SECOND Star Wars Half Marathon Weekend. This one comes to Walt Disney World. My initial reaction was…seriously? This is the first time that runDisney has replicated a theme of their race on both coasts. When the race is run, comparisons will follow. That’s why I’m not 100% thrilled. Here’s the announcement.

LAKE BUENA VISTA, FL (Aug. 25, 2015) – runDisney is summoning the Force today to announce another Star Wars-inspired intergalactic journey, this time to the dark side.

The “Star Wars Half Marathon – the Dark Side” enters the galaxy April 14-17, 2016, at Walt Disney World Resort in Florida and pays homage to the dark side forces of the Star Wars universe. This new race follows the debut of the popular Star Wars-themed race at Disneyland Resort, which will return in January as the “Star Wars Half Marathon – the Light Side”.

“Ever since we launched the Star Wars race at Disneyland Resort, runners have been clamoring for more, so we’re thrilled to bring the Star Wars franchise together with the runDisney brand to Walt Disney World Resort,’’ said Maribeth Bisienere, senior vice president of Disney Sports Enterprises. “If the inaugural Star Wars race at Disneyland Resort is any indication, this new running adventure to the dark side is sure to be the out-of-this-world experience that runners have come to expect at runDisney events.’’

The new Star Wars race at Walt Disney World Resort will be a journey of personal achievement all its own, involving kids’ races, a 5K and a 10K in addition to the half marathon, plus a variety of Star Wars experiences, medals, events and merchandise inspired by a galaxy far, far away. Among its many features will be a unique 13.1-mile course that propels runners through Epcot, Disney’s Animal Kingdom and Disney’s Hollywood Studios and finishes at ESPN Wide World of Sports Complex. There will also be a Star Wars Dark Side Challenge — running the 10K and the half marathon on consecutive days – that offers each finisher a Death Star-themed medal.

Jedi and Sith Lords who dare to experience both Star Wars races will have the chance to take on the Kessel Run Challenge — completing the Star Wars half marathon missions on both coasts. Kessel Run Challenge runners can earn a commemorative “Coast to Coast” medal inspired by the Millennium Falcon starship. Race registration opens Sept. 22 at www.runDisney.com.

Each year more than 200,000 runners sign up for runDisney events, which often sell out in record time.

“We are committed to creating extraordinary experiences and events that appeal to runners of all ages and attract even more fans of our various brands and franchises to the sport of running, creating opportunities for them to live a healthier and more active lifestyle,’’ said Bisienere. 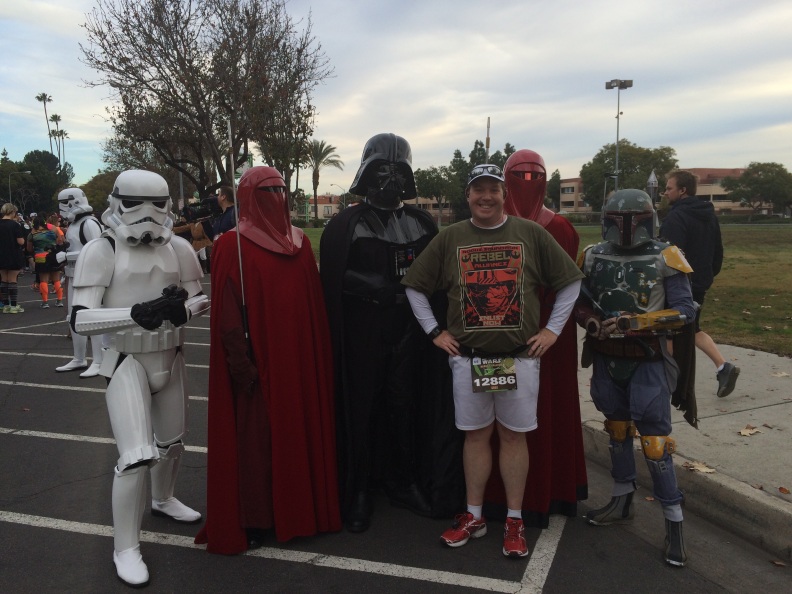 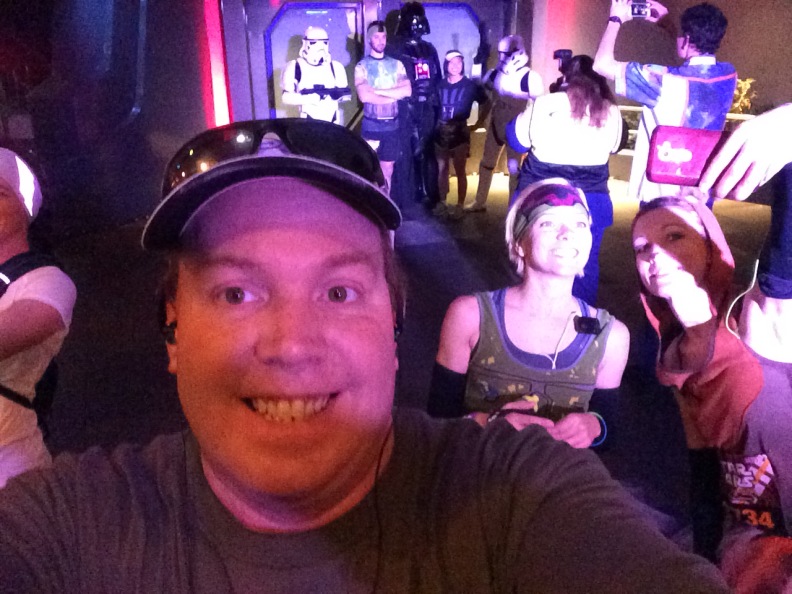 The good of this new race is a new challenge (or two). Like seemingly every other runDisney race, there is a challenge. If you run the 10K and Half Marathon on back to back days, you’ll be finishing the Dark Side Challenge with a Death Star Medal. Okay, I’m totally jealous about that. 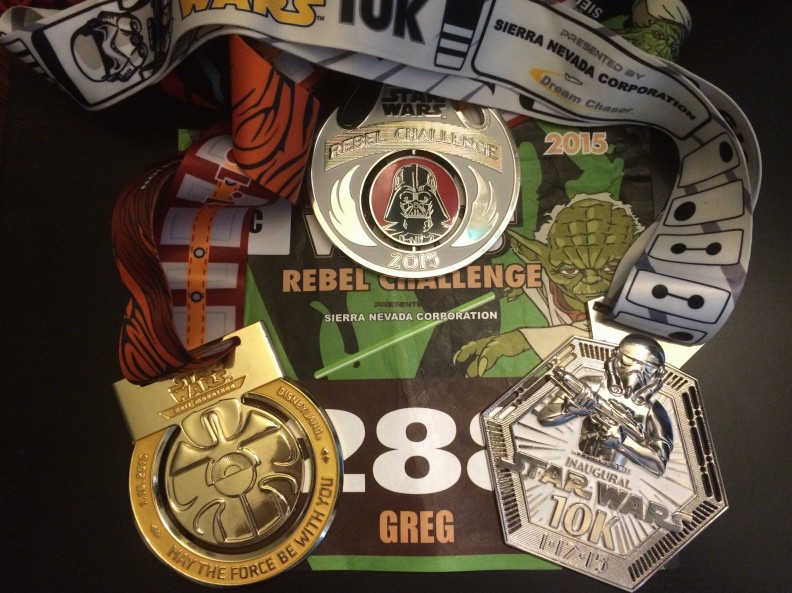 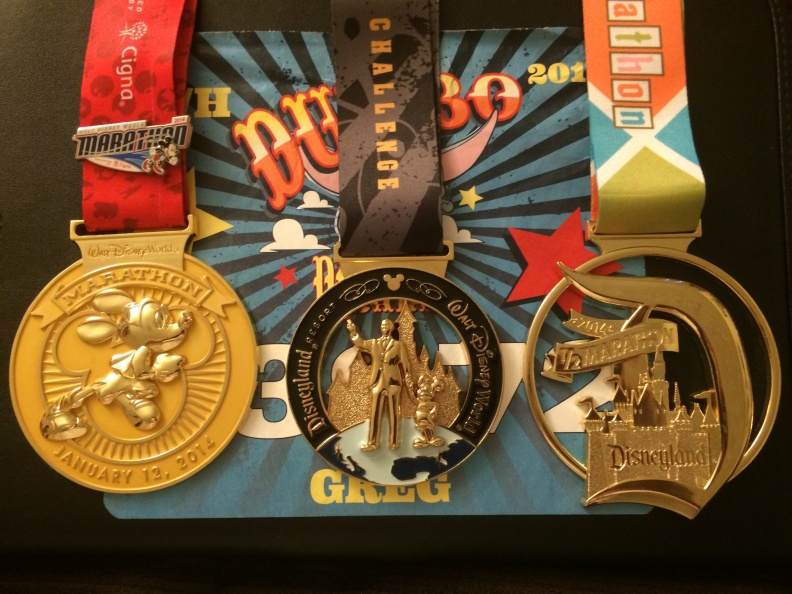 Another new addition will be the Kessel Run Challenge is a special Coast to Coast challenge medal. If you run the Star Wars Half Marathons on both coasts in the same calendar year, you can earn a special Millennium Falcon themed Coast to Coast Medal. 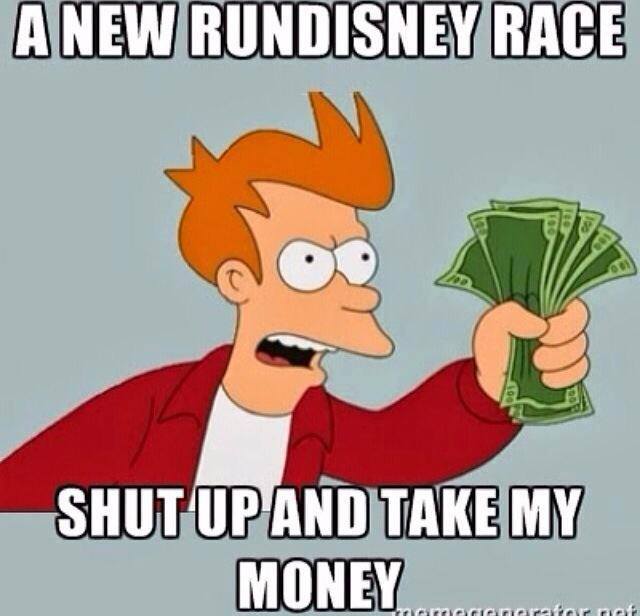 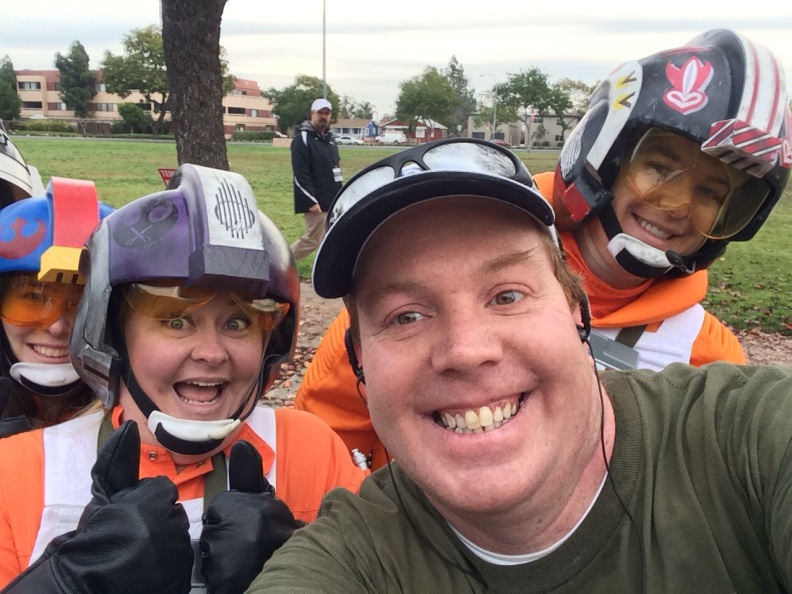 One thing that made the Star Wars Half Marathon 2015 my absolute favorite half marathon ever was the presence of the Cos Players in Miles 8 and 9. Since the Star Wars Half Marathon – The Dark Side will run through three theme parks, I doubt they will have that going for it. Instead, you’ll be left with lots of really long lines to get pics with your favorite Star Wars characters at Walt Disney World. For me, this will be a plus on the Disneyland Race. After all, I never waited more than 2 minutes for any of the pictures I got with the Cos Players. Conversely, lines for the Star Wars characters in the theme parks were ridiculous. When I ran by Darth Vader, they were using the Star Tours queue line. It looked like it was at least a 20 minute wait. Some people I met who did wait confirmed that.  Pluses and minuses.

Running through 3 theme parks sounds amazing! I’m pretty confident that the half marathon course will run by Star Tours and the giant At-At in Endor. I’d be surprised if they didn’t have Spaceship Earth dressed up as the Death Star for the race. So, I’m confident it will be a very fun weekend. After all, it’s Star Wars. What could go wrong? 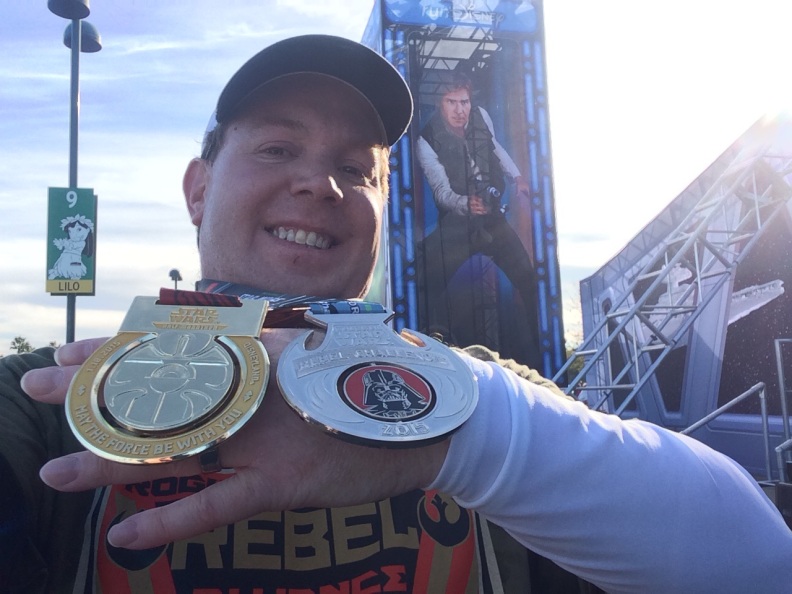 14 Replies to “Star Wars Half Marathon – The Dark Side”