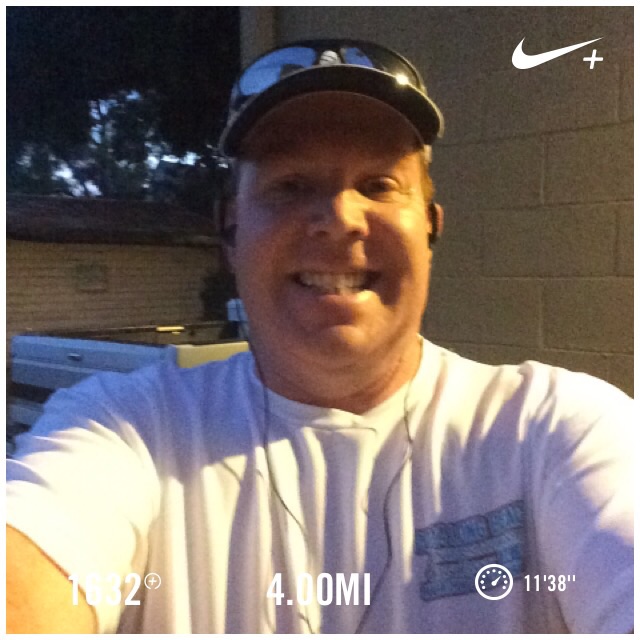 Tuesday evening I was still feeling a little tired from the Dumbo Double Dare simulation the weekend before. So, I was debating on how much to run. Since the temps are getting warm out, I decided to approach this run a little differently. The first mile of my 4 mile loop is the toughest. So, I decided to run the first mile with my marathon intervals of run 30 seconds, walk 90 seconds. Then, I’d switch back to the run 30 seconds, walk 60 seconds for miles 2 and 3. Mile 4 would be by feel. This strategy worked out brilliantly for me as I took nearly a minute off my time from the previous Thursday! To top it off, I felt much better at the end of the run. This was the week of the crazy. So, I do want to mention something memorable about this run. In the third mile, I ran by a guy who was unconscious on the ground. As I got near the guy, there were three other people waving. I thought they were waving me down. But, it turns out they were waving down a police car. It looked like they had called 911 and had it covered. When I got to them, they motioned for me to continue on. So, I did. It was a crazy, out of the ordinary thing about this run. I hope the guy just passed out and was okay. He was completely unconscious when I ran by. 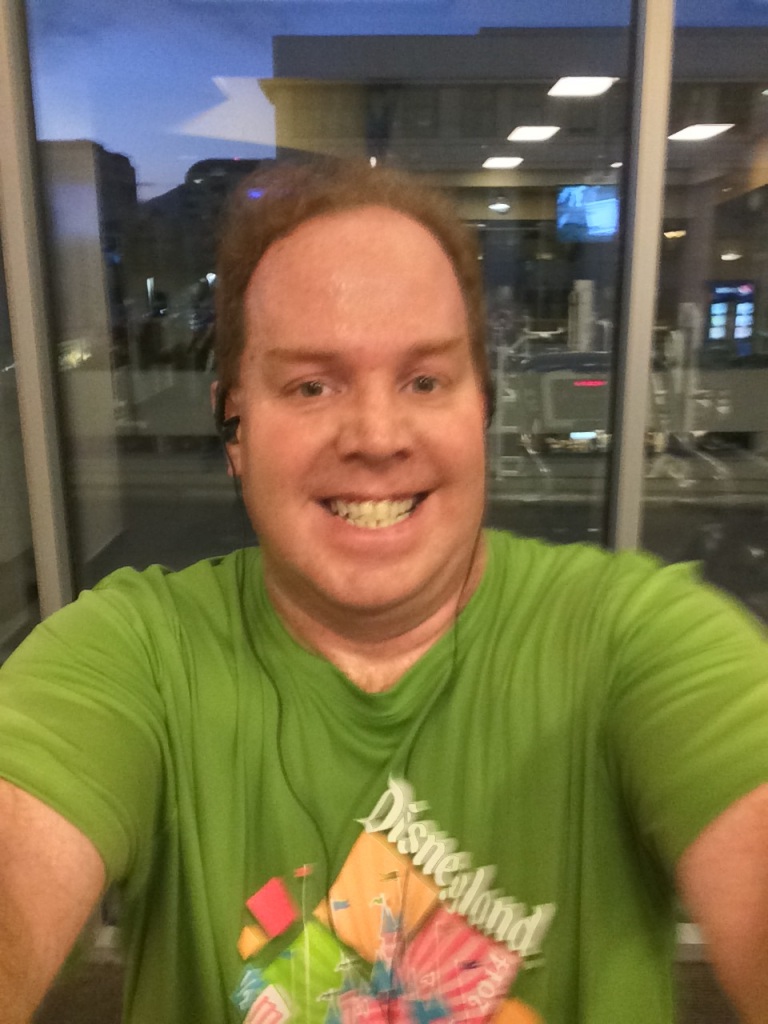 On Thursday, it was entirely too hot to be running outside. The temps were over 90 degrees when I arrived home. According to the weather app on my phone, it wasn’t going to get below 90 until 9pm. Even then, it was going to be 88 degrees. So, since I have a gym membership, I headed off to run on the treadmill. No excuses! I haven’t done a regular run on the treadmill in a while. So, I went into it a little unsure of how to approach it. I decided to run a minute, walk a minute for 4 miles. I ran at 6.0mph and walked at 4.0 mph. This run was a little rough. I’ve never been good at figuring out how fast I should run and walk to get a particular time on the treadmill. So, this is how it turned out…

It was slower overall than my time on Tuesday. However, I did get the miles in and felt like I gave it my best. At some point, I should figure out what my run/walk speed should be in order to get the time I want.

So, here’s where things got crazier. My wife got home from work on Friday to find that our air conditioning unit was not working. On the way home from work, I purchased a new air filter and replaced the old one to see if it would help. It did not. I watched the apartment temperature rise 5 degrees while I ran the A/C. So, it was clear that it wasn’t working. In Pasadena, the high for Friday was in the 90’s. On Saturday and Sunday, the predicted high would 100 degrees both days. I had 20 miles to run this weekend. Because of how hot it was on Friday night, I didn’t get the sleep necessary to make the run happen on Saturday. Since I couldn’t do the run on Saturday, that meant I needed to do it on Sunday. So, I had to fit laundry in on Saturday morning before it got insanely hot. That lead to a cancellation of going to the gym. After all, a hot apartment is not a place I wanted to be. So, Brooke and I worked out a way to be out for the afternoon on Saturday. We had lunch at Dave n Busters. Since Brooke had to work on her classroom Saturday morning, she was a little tired. So, she went to her parents house to rest while I went to see Mission Impossible.

Fortunately for me, my in-laws live close to us. So, we were able to stay with them on Saturday evening. It meant that I had to alter my 20 mile running plans. I was up at 4:30am and out the door a little after 5am. It was projected to be 88 degrees by 11am. So, I needed to get the early start.

Running before the sun was a good idea. However, by the time I got up to Pasadena City College (on my way to the Rose Bowl), I needed a restroom break. Unfortunately, there wouldn’t be a restroom to use until I got to the Rose Bowl. The need was so bad that it brought me to a pure walk. Once I got to that point, I seriously considered stopping and going back. I was frustrated and worried about the upcoming heat. After all, it was 75 degrees at 5am when I started. 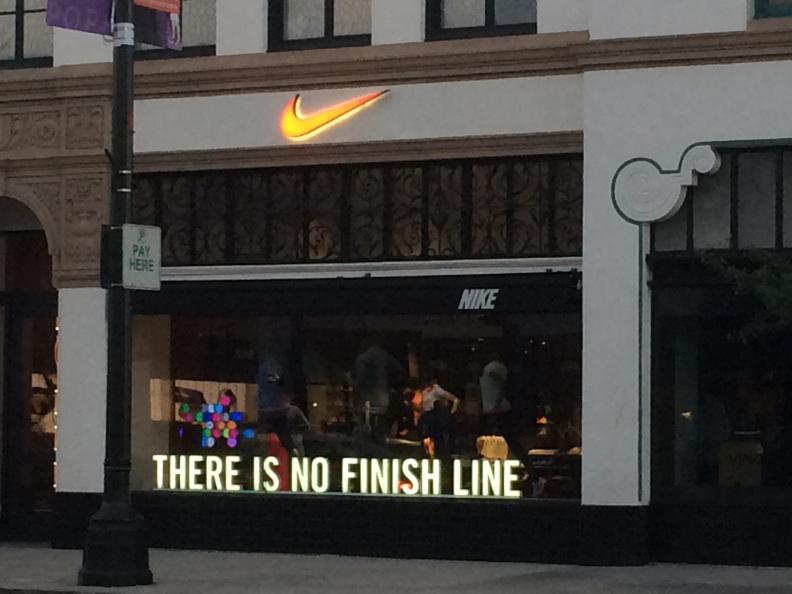 It was a really weird start to this 20 mile journey. I did enjoy the quietness of Colorado Boulevard that early in the morning. I’ve never seen this street so empty and quiet. I loved this sign at the Nike Store!

The Apple Store with no one in it or outside. On my way back, there was a rather large line to get in (which is typical). As I continued towards the Rose Bowl, I started feeling a little better. So, I did add a few run intervals. However, there was no consistency to them. Mostly, I wanted to run in each mile. As I walked, I wondered if I was saving enough energy to keep run intervals going all the way to 20, after the pit stop at the Rose Bowl.

I didn’t get to the Rose Bowl loop until the middle of mile 6. Ah! Relief! The plan was to run Colorado Boulevard up to Orange Grove Blvd. and make my way to the Rose Bowl loop. I’d run that 3 times and then head back. Once on the loop, I was finally free to run. The first mile wasn’t as tough as I thought it would be. By mile 7, I finally feeling positive again. I was running fast enough to watch my average pace steadily go down! I loved the first lap! The funny thing is that on the mile that was hard in the loop, I was in almost complete shade! In the easier miles, there was a lot more sun. So, it kind of balanced itself out!

The second lap is tougher. However, by the end of mile 10, I was still feeling optimistic. In mile 11, the heat was starting to get to me. I did not lie the unending sun I had to run through in the last half of mile 11. By the time I started mile 12, the shade that existed on my first lap was largely gone. This is where I was ready to be done with it all. Unfortunately, I still had 5 miles left once I got out of the Rose Bowl loop. I tried to keep the run/walk intervals going. However, in the last quarter- mile of mile 12, I decided to walk it out. From there, it was all downhill for me on this “run.” Mile 13 saw me running sporadically.

Instead of finishing the loop, after mile 13 was finished, I turned around and went back the way I came. I thought there was still more shade on the side of the loop I came from than what awaited me on the other side. Mile 14 was hard to deal with because of the heat. I decided to go to a complete walk. Before I left the Rose Bowl loop, I refilled my water bottle and took on a lot of water at a water fountain.

Then, it was up this not so fun hill to get out of the Rose Bowl. This picture was not from Sunday. However, I did want to give a visual of this hill. It goes on for about a quarter to half mile. By the time I got here, I was simply not in the mood for pictures. I’m not gonna lie, the last 5 miles were brutal. The heat was brutal and I just wanted this to be all over with. The only thing that got me to the end was that I had to get there. Once I started that third lap of the Rose Bowl loop, I had no other options. It would be 20 miles or I wouldn’t be back at my in-laws house.

See that smile? After 5 torturous miles, I was really happy that it was all over. I’m not going to post the time except to say it was very slow. On this day, however, slow is all I had. Just keeping it real on this blog….the only good thing about this 20 miles was that I finished. Given the extreme heat, that might just be enough. I’m really glad that there are two more crazy long 20 mile plus runs left before the Bank of America Chicago Marathon. So, there is time for some redemption. Hopefully, the weather will be kinder to me. 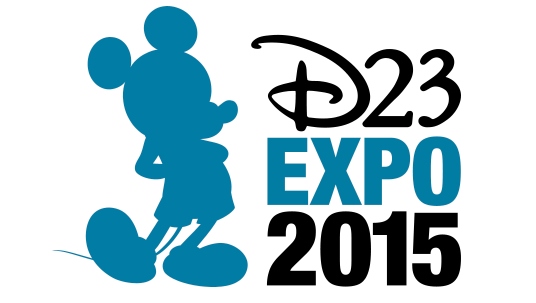 So, this weekend was the D23 Expo. I didn’t go to the expo this year. So, I got to live vicariously through my friends on Twitter who were there. On Monday, I started seeing videos pop up on You Tube from the expo. So, later this week, I’ll have some to share with those of you who weren’t there. The big announcement of the Expo seemed to be that there will be a Star Wars Land coming to BOTH Disney’s Hollywood Studios AND the Disneyland Resort! I’m pretty stoked that they are adding Star Wars to BOTH coasts. No time tables were revealed. However, we did learn that there will be more Star Wars coming to the parks this year! There will be a new scene or two added to Star Tours from The Force Awakens. It looks like Innoventions at Disneyland will be half Star Wars half Marvel. Then, in 2016, Disneyland will see something along the lines of Star Wars Weekends. Part of that will be a new overlay for Space Mountain called Hyperspace Mountain! Disney’s Hollywood Studios will be getting a fireworks show to the music of Star Wars. So much awesomeness happened this past weekend!

I wanted to say a quick thank you to those of you who have donated towards my Chicago Marathon charity over the past week. If you haven’t had the opportunity to give, you still have time. for every $10 donated, you will have one opportunity to win a $50 Disney Gift Card (or $50 Visa Card for non-Disney fans). On my birthday (August 28th), I’ll be drawing for this give away. To donate, please click here. I’m running for the orphans and the couples that want to adopt them. Every child deserves a forever home. Please consider helping me get to the Bank of America Chicago Marathon and these two adoption agencies find homes for orphans in Hatti and China. Also, please help me spread the word. Maybe some of your friends and/or family could help me out. The web site is https://www.crowdrise.com/2015AdoptionLinkChicago/fundraiser/gregloucks. I’d really appreciate the help.