I can’t believe that it’s been a week and a half since I last wrote a blog post. What can I say? Life happens. 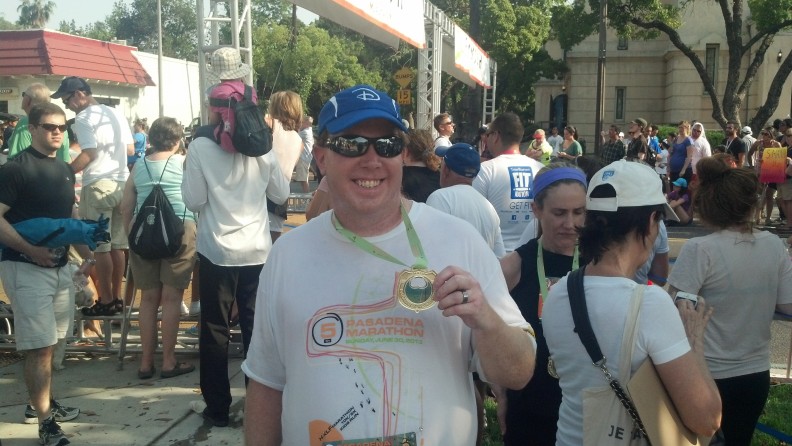 I know that it’s not a Throwback Thursday, however, I wanted to point out that it was two years ago that I set my current 10K PR at the Pasadena 10K. It’s hard to believe that this mark has stood. However, I haven’t raced a lot of 10K’s since this one. So, it’s not that surprising.

So, what have I been doing? Well, I’m trying to find my way back towards consistency. On Wednesday, June 17th, I got out for a 4 mile run. As you can see from the graphic above, I was not only running, but creating awesome as well. I had missed the opportunity to run on Tuesday due to poor sleep on Monday evening. On this week, I was determined to make both of my mid-week training runs. This run went pretty well. I was 3 seconds slower than the week before. However, I was still keeping it under 44 minutes. So, it wasn’t all bad. I don’t remember too much about this run except that I passed a billboard for the Minion Movie right before “Everything is Awesome” came on the playlist. Even though that song is from the Lego Movie, it still felt awesome. One thing I’ve noticed with the 4 mile route. The last half mile has been difficult for me. I’m able to push through it, but it’s still hard.

The next day, Thursday, I was up and out for another 4 miles. Nothing about this run felt good.It was pure determination to get a second mid-week run in that got me out the door. I was tired and the temps were starting to heat up. Although I didn’t check the humidity, it felt like it was more humid than usual on this day. The first mile was slow and I didn’t make up enough time on the second for it to be a great run. However, the victory was actually making 2 mid-week runs. The previous two weeks, I failed to do so.

Saturday, June 20th was supposed to be a 13 mile long run. However, the early wake up calls wore me down and I decided on Friday to switch up my run and gym workout. We had a lot on deck for the weekend. So, I should have just found a way to get the run in on Saturday morning. As it turned out, time got away from me on Saturday and I failed to make it to the gym. I had a going away party to get to for a friend of mine that evening. My friend and his wife and kiddo’s are moving to New Jersey because he’ll be working as a producer on the Daily Show. It’s kind of cool story and I’m very proud of my friend David. He worked on a student project while finishing classes at USC’s Film School about the stand up comedy scene in South Africa. It lead to a full-blown documentary film centered around an up and coming comedian named Trevor Noah. If’ you’re a fan of the Daily Show, you know that Trevor will be taking over for John Stewart. The documentary, entitled You Laugh But it’s True can be streamed on Netflix. While making the film, Trevor and David became good friends. So, whenever Trevor is doing something, David is usually apart of it. Anyways, he’ll be serving as producer of the pre-taped segments used on the show.

By the time I got home on Saturday, I learned that the air conditioning had broken down in the apartment. So, with temps in the 90’s, we didn’t have air conditioning. That pretty much wrecked my sleep on Saturday evening and no run on Sunday. It also took me away from the computer to come up with blog posts.

I needed to get my blog posts written by Sunday night if I was to post last week because my brother-in-law, nieces and nephew were coming to town from Houston. Since we don’t get to see them nearly enough, my week was divided between sleep, running, working, and hanging out with the nieces and nephew. Sorry guys. I couldn’t blog.

I really wanted to get out and run last Tuesday, but that didn’t happen. So, Wednesday it was. I was feeling tired from the busy schedule. So, the only thing that got me out the door was to tell myself I’d only run 3 miles. With temps around 70 to begin the run, I learned how much heat can influence your pace. This was a slow run pure and simple. I was really struggling throughout. So, unlike my usual runs over this route, I didn’t switch up the run/walk intervals for the last mile. The first mile took me a little more than 11 minutes which bummed me out. I just kept telling myself that slow runs are okay. It was warmer than I was used to and my body will eventually adjust.

The goal was to get out again on Thursday. However, I just couldn’t wake up. I tried to wake up. However, it didn’t happen. So, the lesson learned is that doing back to back mid-week runs every week isn’t a good plan.

Saturday morning, I was determined to get 13 miles in to make up for my missed run the week before. Even though I was determined the night before, it took me a while to actually get out the door on Saturday. It was going to be another warm run. So, I had no plans on setting any records. I went back to my marathon run/walk intervals for this run. After all, it was my first long run in preparations for the Bank of America Chicago Marathon. 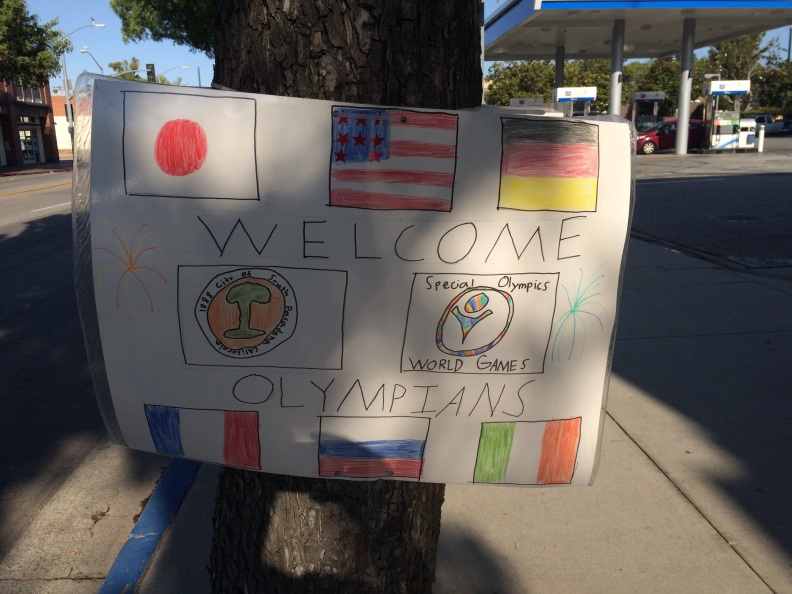 I was pretty slow over the first few miles. It was truly an effort on this day. The temps were warm and part of me really didn’t want to be out there. There might have only been a few miles where I honestly wanted to quit. As I ran through South Pasadena, I saw lots of signs along the road like this one. That was a nice distraction. I also had many people from the Pasadena Pacers run by going the opposite way. That told me that the Rose Bowl loop was probably closed. I had a feeling like that would be the case. So, I wasn’t planning on going there. I did run like I would if I were including the Rose Bowl loop, though. That meant I’d have that crazy hill on Orange Grove Drive to conquer in the third mile. Even though I was slow and didn’t want to be out and running, I did keep all the run intervals all the way up the half mile hill!

Towards the end of mile 4, I ran by the Tournament of Roses house. Orange Grove Blvd is a really fun place to run. There are always runners and dog walkers out and the street is lined with palm trees. My route is largely uphill on this street until I get across the 210 freeway in mile 5.

Shortly after passing the Tournament of Roses house, I realized that I forgot to put the sun screen on. Oops. As a person who burns easily, I was a little freaked about it. However, there was nothing I could do about it now. As I ran, I made sure to stay out of the sun as much as possible and prayed that I wouldn’t get burned.

In the fifth mile, I was clear that this was going to be a “gut it out” kind of run. Nothing was going to feel great. However, I needed the miles. So, I had to focus on the run intervals as they came and stay with my fueling and hydration plan. For the most part it worked out. I was going slow, but I was hitting all the run intervals and finding a way to keep moving forward. However, towards the start of mile 10, I was done. I couldn’t keep fighting it anymore. Fortunately, I would need to finish at least 12 miles to get home. So, I just walked out the final miles. In the sun, it wasn’t fun. I felt totally bummed about quitting.

Miles 10 and 11 were gradually uphill. Even though I had been doing my best to keep hydrated. The run intervals I attempted left me feeling a little light-headed. So, I decided the best idea was to walk until I got to mile 12. As soon as I got to a more downhill mile, I tried a run interval again and it worked out much better. So, for mile 12 and into the start of mile 13, I was running again! However, it didn’t take me too long to just walk it out. I think I threw in the towel for good at 12.25 miles to walk to the finish.

As you can see. The time was really bad for me. I don’t think I’ve ever had a slower 13 miles. If I had keep my run/walk intervals going, I would have finished in under 3 hours. Walking took its toll on my finish time. However, I believe that temperature in the last few miles was around or just over 80 degrees. So, it would have been unwise for me to have pushed too much harder.

At the end of the day, I finished all 13 miles. There will be other days to do better. Jeff Galloway has talked in the past about how you do get a benefit from walking the distance you need. So, I’m hoping that proves to be true.

Patience is what I need for now. There is still a lot of time before the Bank of America Chicago Marathon.

This is the focus until then. It’s my biggest hope that I can find consistency starting this week. I got 3 workouts in last week for the first time since the week of the San Diego Rock n Roll Half Marathon Weekend. So, that’s a good sign. This week, I want to get back to 4. Two weeks ago, I really thought I was going to get to 4 after hitting both runs in the mid-week. If I need to remember anything from that week is to not count your chickens before they hatch. Never count on making a workout until it happens. No matter how consistent you’ve been, life has a way of stepping in at times and messing up the plan. When it does…

Get back up again and keep moving forward.

If you’re looking for some information about running in these warmer days, check out the following two articles…

Good luck to all of you as you train for whatever race you’re training for this summer.