This wasn’t exactly the week I had envisioned for myself. However, it could have been much worse. Whenever you take a week off, there are consequences. I think that, after the Rock n Roll San Diego, I was just tired and got sick. It is what it is. Unfortunately for me, cold/sinus problems rarely disappear right away. On top of that, trying to transition my schedule makes for some difficult choices. I know that limiting my blogging to 3 times a week will benefit me. However, once I took the blogging away for a few days, other things were right there to fill it. As I’ve been transitioning, I’ve also lost sleep. No matter what anyone says, sleep is huge in keeping up your training. As I found out this week. 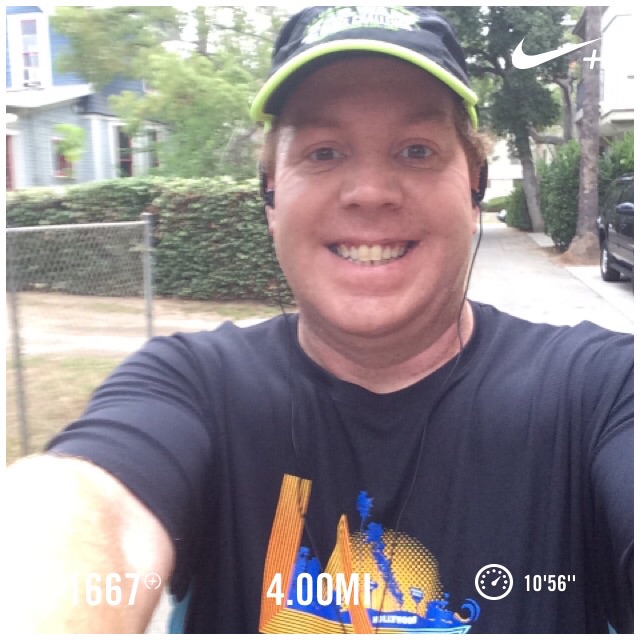 My first training run didn’t happen until Wednesday this week. Monday night, I could not sleep. I think that I ended up with somewhere around 3-4 hours. It’s totally frustrating to go to bed on time and lay there with an overactive mind that will not shut up. When you’re still under the weather a little on top of that, it just leads to disaster. So, Tuesday got cancelled due to lack of sleep. I tried on Tuesday morning to fight through it. However, my body just would not give me what I needed to get out the door.

So, I made sure to get to bed on time again Tuesday night. While I still didn’t end up with my desired 8 hours of sleep, I got enough to get myself out the door. I was determined to get out and start my training for the Chicago Marathon. The good thing about taking a week and a half off is that your legs feel pretty fresh. In the entire 4 miles of Wednesday, my legs held up great. I fought through the first mile and was pretty close to my normal first mile on this route. Same with the second mile. However, in the third mile, I was mentally fatigued and ready to be finished. I fought through the third mile and was only a little off. I knew it was a purely mental battle for the last mile. In the end, I was thrilled that I got through all 4 miles with an average pace under 11 minutes per mile! It was hard-fought. However, it was great to be under 44 minutes! 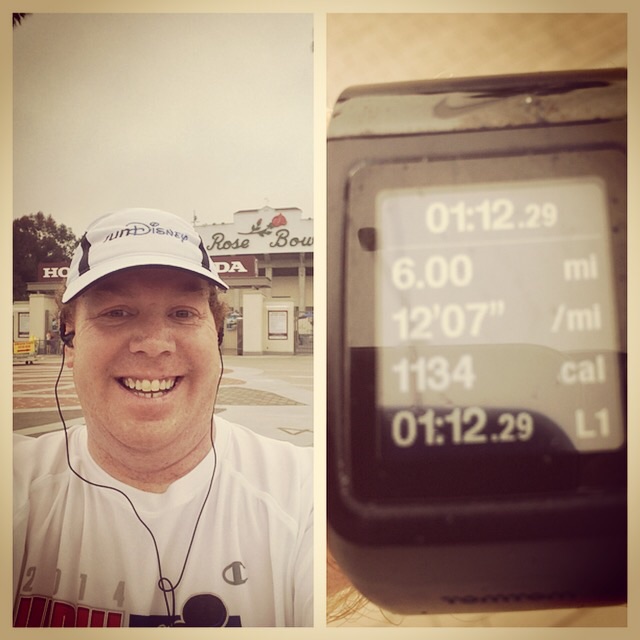 The lack of sleep killed another training run on Thursday. By the time I got to Saturday morning, I did not want to go out and run. I was tired because I failed to get one 8 hour night of sleep all week-long. When the alarm went off on Saturday morning at 6:30am, I didn’t think I was going to make it. I still got up and tried to wake up. After breakfast, I still was convinced I’d skip this run. I just wasn’t feeling it. So, what got me out the door? The realization that, it was days like this where I needed to get out and try. Marathon training is not for the faint of heart. You will log many many miles in preparation. Some of those miles are awesome. Some are painful. Some, you just have to pray your way through. However, slow training runs are much better than missed training runs. So, out the door I went.

I had gone back and forth with what I was going to do on Saturday. On the calendar, I have a 4 x 1 miles. When I made the calendar out, I mistakenly thought that Yasso 800’s were 1 mile intervals. So, if I have a Something x 1 miles, I’m meaning Yasso 800’s. On Thursday and Friday, I spent some time trying to find a track I could head to for the speed training. It looked like the Cal Tech (the closest) track was going to be open. I also saw the hours for the track at USC (later, I’d find out that I couldn’t have gone there if I wanted to because of NCAA championships). As I contemplated doing the Yasso 800’s for the first time, I also considered the fact that I took last week off and I had only finished 1 training run in almost 2 weeks. So, what could I learn from a speed workout?

So, I nixed the Yasso 800’s on the track in favor of going back to the Rose Bowl. I haven’t run there in quite some time. My next race is going to be there and I thought it would be good to remind myself of what it was like running around the loop. Since I was going there, I also flirted with the idea of finally checking out the Pasadena Pacers and running with them. Again, my lack of running over the previous two weeks convinced me to skip that and just run 6 miles.

It was an overcast and drizzly day. Thankfully, I had some rain gear. By the time I got to the Rose Bowl, I decided that I wouldn’t need the gear. The drizzle was more off and on. So, I thought I’d be okay without it. Even though I had used the restroom before I left for the Rose Bowl, I had to use it again once I arrived. That meant a delay in my start time. With the overcast-ness of the day, I hoped it would be okay. I should also mention that my head was slightly congested in the morning. When I went to put my headphones in my ears, one ear clogged up a little bit. Urgh! This made me a little concerned with whether or not I should run. One lap, is what I thought. Let’s do one lap and see how I am.

The first mile was really slow. I was just over 11 minutes. This is rarely good for me. I was tired, congested, running in a steady drizzle and wondering why I was even attempting to run. However, I knew it would get better in mile 2….and it did. My time was still not great. However, I was making it and feeling better. By mile 3 I was not going to be overly concerned with my finish time. This was just going to be one of those slow days. I was okay with that. I did want to finish the end of mile 3 in under 36 minutes, however. That was what got me through mile 3.

Mile 5, as it got easier, is when I started wondering how long it would take for me to finish. At the start of mile 5, I was convinced I’d finish in an hour and 18 minutes or so. I didn’t want to take any longer than that. Half way through mile 5, I started to find a new burst of energy. It’s as if my mind had finally allowed my body to run like it knew how because I only had a mile and a half left….and it was an easier mile and a half. So, I went back to a 30/60 run/walk interval ratio for the rest of my run. Much to my surprise, I was just under an hour and 2 minutes over 5 miles! That one hour, 18 minute guess looked slow.

In mile 6, I kept the 30/60 ratios going and started thinking I’d finish in an hour, 15 minutes. So, when I got to the end and it was just over an hour and 12 minutes, I was thrilled! In the grand scheme of things, it wasn’t a great run. However, considering the week I had, how I was feeling that morning, and how my run was going through the first 4 miles, this was a huge victory! 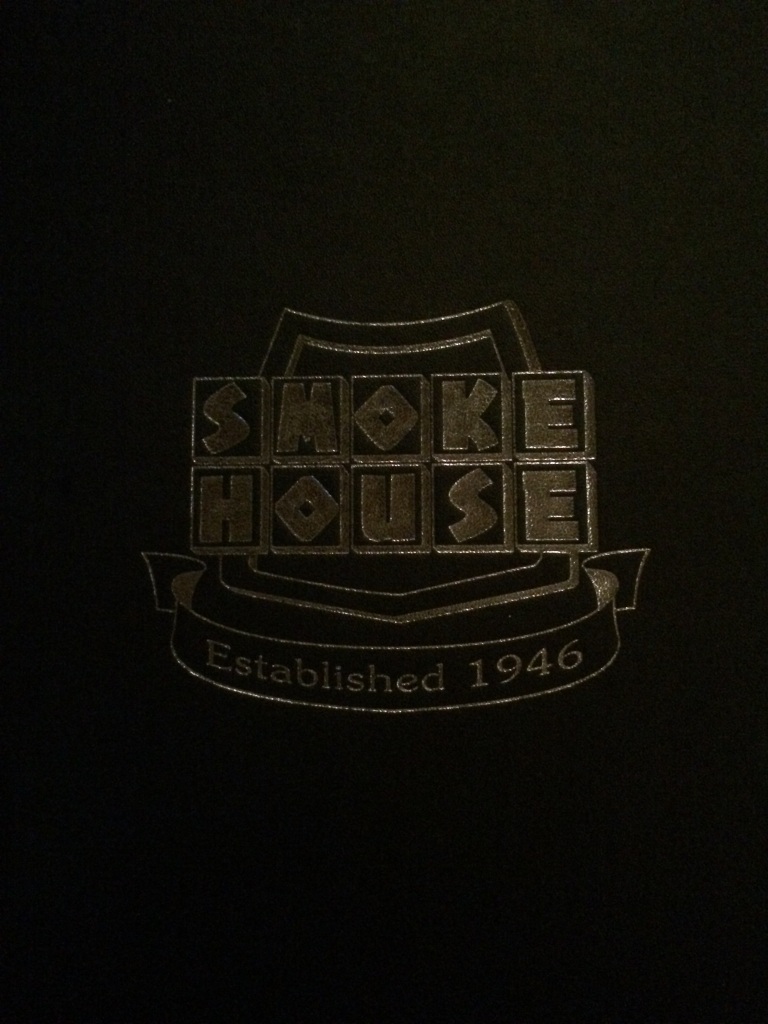 On Saturday night, Brooke and I had a date night! We started off with dinner at the Smoke House in Burbank. If you’re a Walt Disney fan, you’ll probably know that this was a place he really liked to dine. 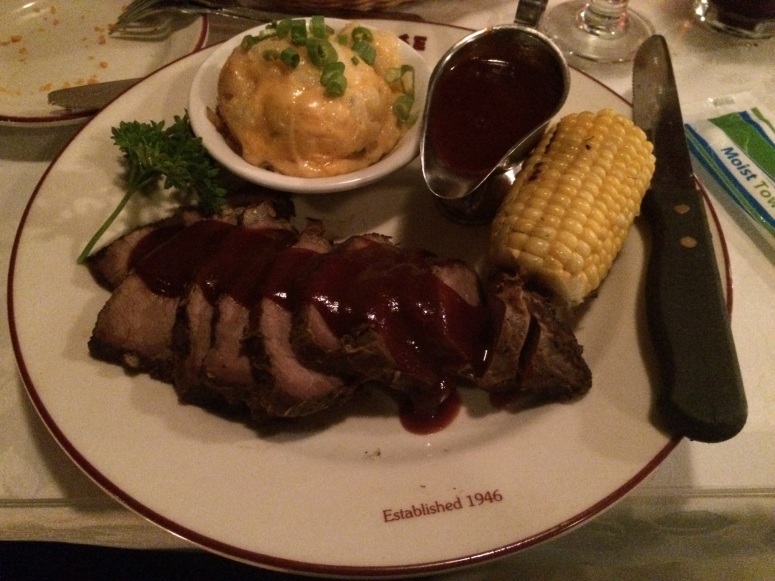 I had me the Tri-Tip for dinner! It was absolutely amazing! 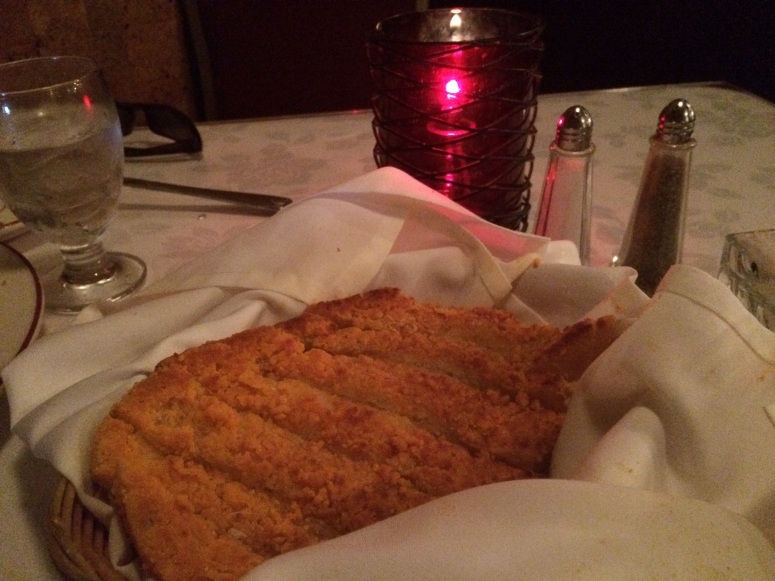 One of the things that the Smoke House is known for is their amazing garlic, cheese, bread. If you ever go there, it’s a must! 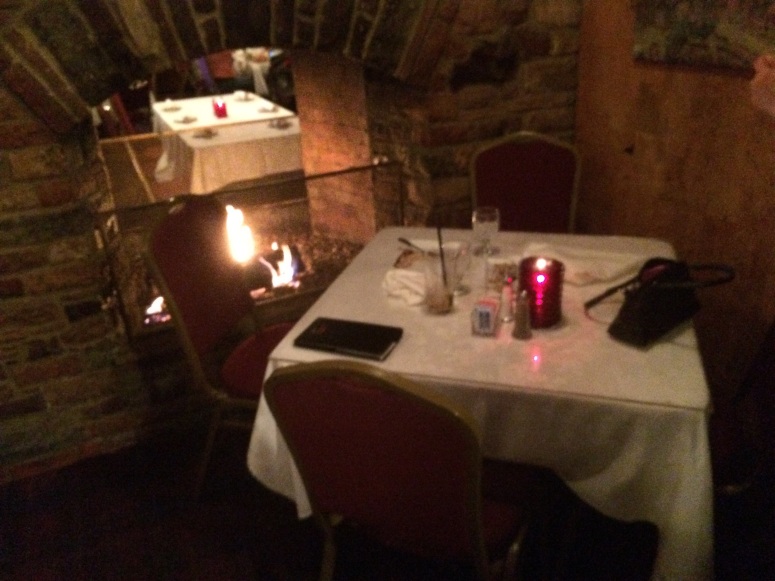 Even cooler, we got this table, tucked away in a little corner of the restaurant. Nothing like a dinner by the fireplace with the wife! It was a fantastic start to our date night! 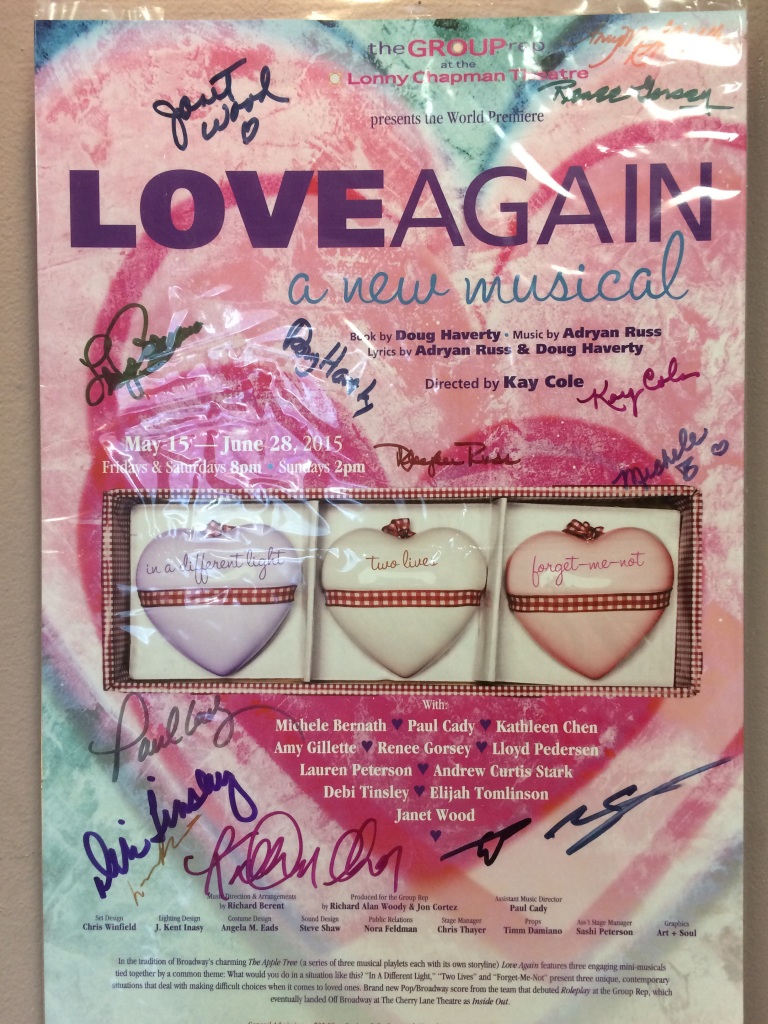 Part two of the nigh was taking in Love Again. 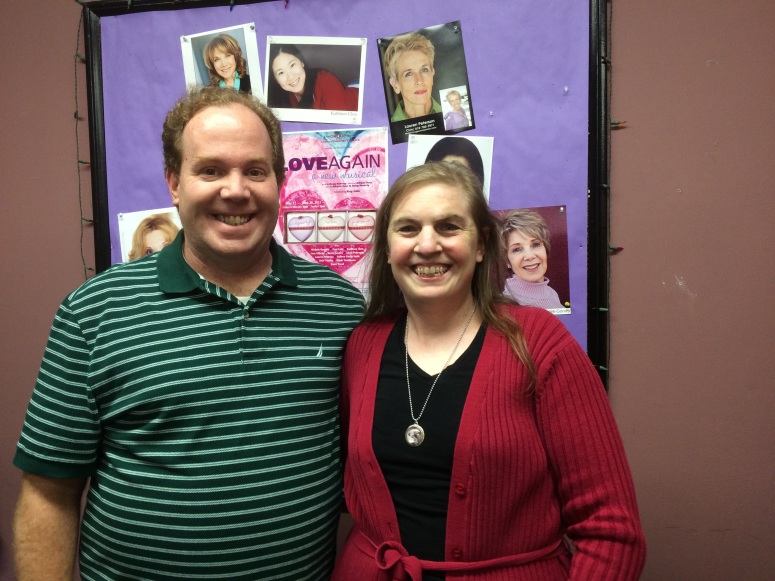 Both of us loved the musical. Love Again played in this little theater in North Hollywood. I think they said that the theater had a capacity of 99 people. One thing that’s great about living in LA is we do have a pretty good theater scene. We’ve taken in some plays and musicals in smaller theaters before. There’s something cool about being in a small venue and seeing actors who are not being paid much money to perform. Plus, it’s a show that was being premiered here. This show was three mini musicals in one show. The writing was pretty clever in parts and the cast pulled it off brilliantly! It was a great way to finish a great day!

Sunday was supposed to be the day I returned to the gym. Since I wasn’t running the Yasso 800’s at the track, I thought I’d do them on the treadmill instead. Well, my head clogged up really bad on Sunday morning and made Sunday a pretty miserable day. So, I missed the gym workout. 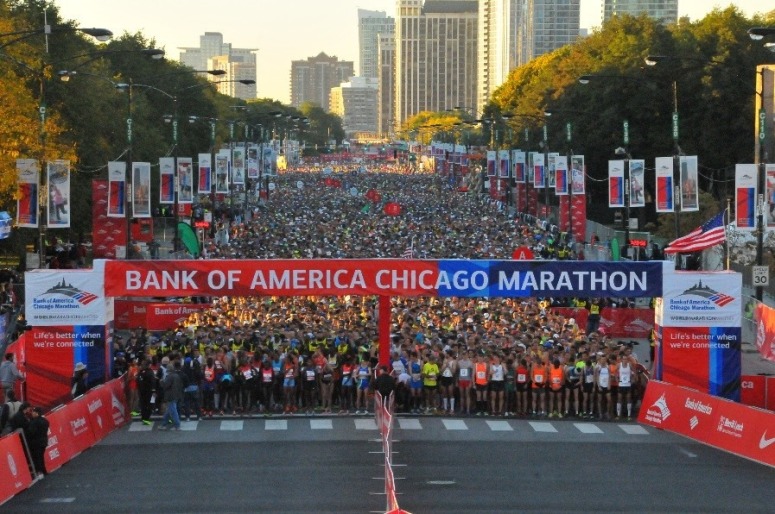 I’d give myself a C or C+ for the week. 2 workouts are better than none. However, I need to build on this for sure. The Bank of America Chicago Marathon is just under 4 months away. I’m hoping to have the airline tickets booked early this week and have already begun the planning of the trip to Chicago. If I really want that sub 6 hour marathon, I need to get back at it. Hopefully, this week will be the week I get back on track! 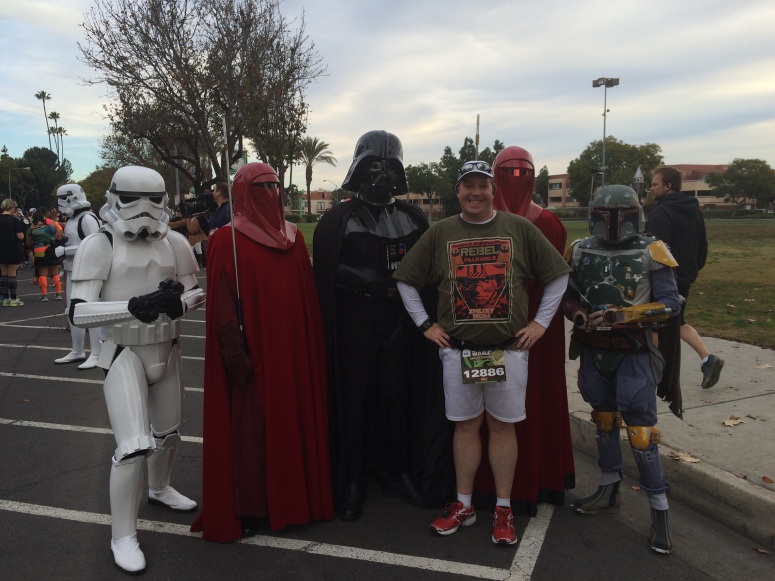 I know that some of you have already taken advantage of the early registration for the 2016 Star Wars Half Marathon Weekend at Disneyland. For those that didn’t get in, registration opens to the general public TOMORROW! Are you going to run? If so what races are you planning on running? I’m going to sign up for the Rebel Challenge if I can get in. If you’re on the fence, check out my race reports in the “Races and Results” tab. The Star Wars Half Marathon is my favorite half marathon to date! It is the flattest half marathon course Run Disney offers and the off Disney property part of the course is the best Disney has offered. There were nearly 2 miles of Star Wars characters in the city of Garden Grove! 2 miles! Miles 8 and 9 were where the party was at. If you want to register, I highly recommend joining the Team #runDisney Facebook group (link on the right side) and be on your computers at 11:45am EDT/8:45am PDT TOMORROW. Be ready with your credit card and ready to type fast. The Star Wars 10K and Rebel Challenge are sure to sell out quickly. Good luck to all who wish to run at Disneyland this January. May the Force Be With You!

2 thoughts on “Back to the Grind”