I wanted to get this post out last week but didn’t have the time to write it. With the Bank of America Chicago Marathon now on my calendar, it has allowed me to set up all the races I want to do between now and the 2016 Asics Los Angeles Marathon. So, I worked out a training calendar to get me focused on what I’ll need to do. That calendar has now been uploaded to my Training Calendar tab if you’re interested. So, let’s look at the races I’ll be running in. Some of these races I’m already registered for and others, I’m planning on registering for in the future. 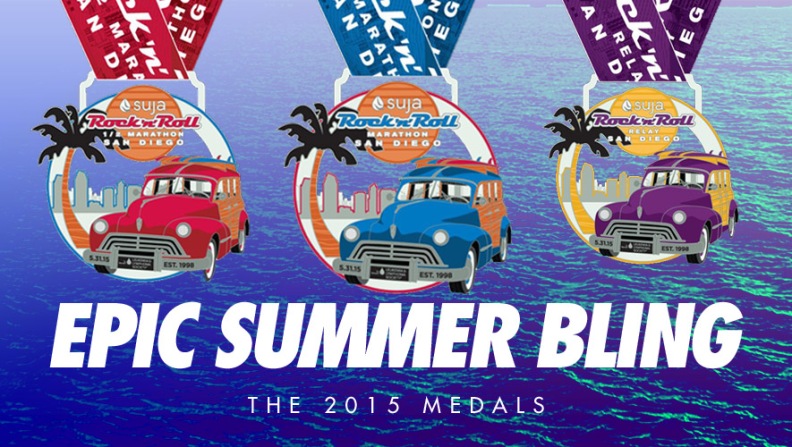 First up will be the Suja Rock n Roll San Diego 5K and Half Marathon on May 29 and 30. Initially, I wasn’t going to sign up for the 5K. However, there was an email I received that mentioned a meet n greet with Meb after the 5K for those that ran the race. So, I had to register for that race as well! I’m currently on a training plan that will get me prepped for the RnR San Diego Half Marathon. After hearing Jeff Galloway talk about the advantages of taking a half marathon training plan to 15 miles, I altered my original plan a little bit. On top of that, I really wanted to do a 10 mile run when the original plan called for 9.5. So, I’ve upped the miles a little bit in hopes that could help me reach a new half marathon PR at this race. The course is designed for negative splits. Most of the climbs are in the first 6 miles and the last 7 is largely downhill. So, I’m really hopeful that I’ll have a new half marathon PR at this race. Also, I’m going to see if I can beat my 5K PR on the same weekend. I’ll have to see where I’m at and what I’m feeling during the race on that goal.

September 5th and 6th is the Disneyland Half Marathon Weekend where I’ll be running the Dumbo Double Dare. If I run the Awesome 80’s 10K and set a new 10K PR at that race, both the Disneyland 10K and Disneyland Half Marathon will be for fun. Although, I would like to set some runDisney PR’s at these races. However, the heat will largely dictate how hard I push. I’d love to have a sub 3 hour half marathon at a runDisney race. In all honesty, though, I’m running the half marathon to get the medal. The thing I like about this race is that I’ve done it the past 2 years. So, I won’t feel the need to capture as many pictures of the race course as I’ve done in the past. I don’t plan on  pushing to set a half marathon PR at the Disneyland Half Marathon. In my training calendar, I have allowed 3 weekends of back to back training run days to get me prepped.

On October 11th, I’ll be running in the second goal race of my calendar…the 2015 Bank of America Chicago Marathon. Once the Rock n Roll San Diego Half Marathon is in the books, my focus will turn entirely to the Bank of America Chicago Marathon. I feel like I’ve got a sub 6 hour marathon in me. If I train well, this will be my goal time for this race. As I’ve mentioned before, I’ll be running for Adoption-Link. So, it will be a fun, new experience of running for a charity! The folks at Adoption-Link are still working on setting up our fund-raising web site. You can rest assured that I’ll be giving you all the information you need to help me raise money for this very worthy charity! The weather in Chicago is supposed to be pretty good around the marathon weekend. So, this could be a day that I set a massive marathon PR. Until I get to those big training runs, I can’t make any predictions about this race. However, right now, I really want that sub 6 hour marathon.

October 25th, a mere 2 weeks after the Bank of America Chicago Marathon, I’m planning to run in the Rock n Roll Los Angeles Half Marathon. This is the course where I set my current half marathon PR back in 2013. When I ran the 2014 Walt Disney World Marathon, I had 3 weeks before I ran in the 2014 Surf City USA Half Marathon and set my second fastest half marathon (while walking almost the entire last 4 miles due to a cramp). I have every reason to think the Rock n Roll Los Angeles Half Marathon could be where I set another half marathon PR. However, it’s way to early to think about that. I loved running this race in 2013 and am looking forward to running it again this year.

November 14th and 15th, I’ll be taking on the Infinity Gauntlet Challenge for the Avengers Super Heroes Half Marathon Weekend. Because of my other races, I don’t think either race will be for a fantastic time. I’ll probably be running these races for fun and as part of my preparations for the 2016 Los Angeles Marathon. I can’t wait to see what the Captain America 10K course will be like! Hopefully, this year, the winds won’t be as bad as they were last year. I really liked the course for the Avengers Super Heroes Half Marathon from last year. I hope that in year 2, runDisney puts a little more into this weekend.

I’ll start off 2016 by running in the Rebel Challenge for the Star Wars Half Marathon Weekend on January 16th and 17th. I will be in the crazy training run portion of my Los Angeles Marathon training when this comes around. So, again, it’s way too early to make predictions about what I will want to accomplish during this very fun running weekend. As for now, I think I’ll probably run the Star Wars 10K for time and have tons of fun with the half marathon.

On February 14th, is the Los Angeles Marathon. Since this is my 3rd goal race on my calendar, I’m looking for some redemption. After training so hard for this year’s Los Angeles Marathon and watching the weather take away what might have been a marathon PR, I want to do really well in this race. So, running in the Surf City USA Half Marathon one week prior seems like a bad idea. I’ll have to wait and see how I feel later this year about running the Surf City USA Half Marathon.

There you have it folks! My races that I’m either already registered for, or am planning registering for, up through Valentine’s Day 2016. My race calendar is built around 3 races…the Suja Rock n Roll San Diego Half Marathon, Bank of America Chicago Marathon, and the Asics Los Angeles Marathon. I’m also considering running the 2016 San Francisco Marathon. I guess you could say, I’ve caught a marathon bug. Hitting new PR’s are one thing. I’ve scheduled these races to keep me running through the rest of the year. After all, that’s the main goal in all of this. Setting goals of getting PR’s are just one way of keeping me motivated. Last year, I learned how it is to loose your motivation. Hopefully, this year, I’ll have learned from last year and have a year of progress.