As I mentioned yesterday, this past weekend, I had the opportunity to run over as much of the 2015 Tinker Bell Half Marathon course as I could. Of course, I can’t go backstage. Also, I took the time to go over the parts of the course inside of Disney California Adventure and the first part of Disneyland. Then, my battery died. So, I didn’t get everything I wanted. Much like I’ve done with other runDisney races at Disneyland, this coverage will be done in several parts. Today, I’d like to cover the start of the race all the way through entering Disneyland. Tomorrow, we’ll pick it up at Disneyland. Sound good? Ok. Let’s go. 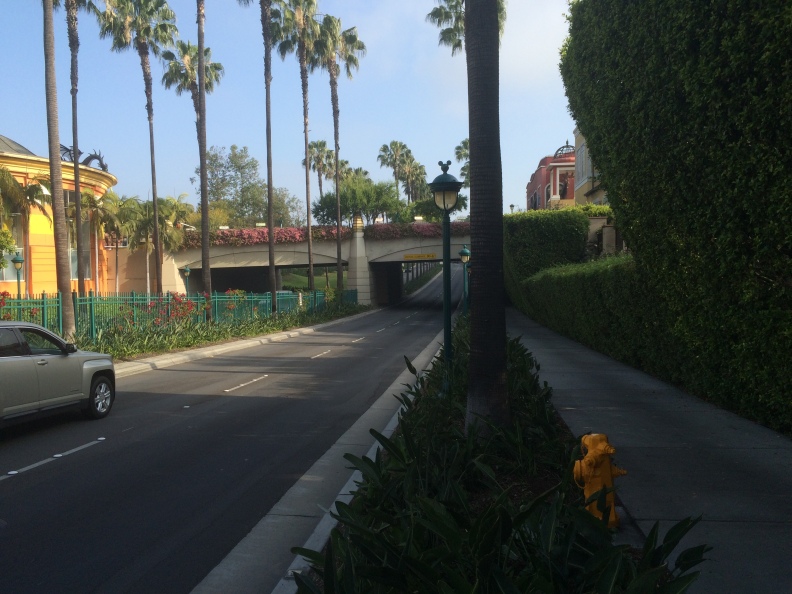 Just like the Star Wars Half Marathon, the Tinker Bell Half Marathon heads towards Ball Road (as opposed to the Disneyland Half Marathon and the Avengers Super Heroes Half Marathon that heads towards Katella Avenue). The corrals will be lined up facing the direction in the picture above. Don’t worry about the incline on the other side. The start line isn’t until the top of the small incline.

If memory serves me correct, the start line will be somewhere around this spot. As you can see off in the distance is the first little uphill portion of the course. Don’t worry, it’s not much of an incline. Plus, with all that built up energy you have before the start, you will likely not even notice it. At least that was my experience at the Star Wars Half Marathon and the Star Wars 10K which started on the same path.

Here’s a little more close up of that incline. If you’ve run the Disneyland Half Marathon or the Avengers Half, this is where the back corrals are lined up heading the opposite way.

On the other side, you largely head downhill and flatten out on your way to Ball Road.

You turn right at Ball Road and you’ll see some of this. The good news is that, if you want to avoid some of the crowding at the start of the race, you can always choose to hop up on the side walk here. The crowds were pretty sparse here for the Star Wars Half Marathon.

This hill is somewhere around a half mile into the race. It’s actually a freeway overpass. This overpass is part of the 5th mile in the Disneyland Half Marathon. The good news for those who have run that race is that it’s so early. This way, you don’t have to worry about the crazy sun like you do at the Disneyland Half Marathon. I’m a slow runner and it has taken me a minute to run from the bottom to the top. So, it’s not too bad of a climb. 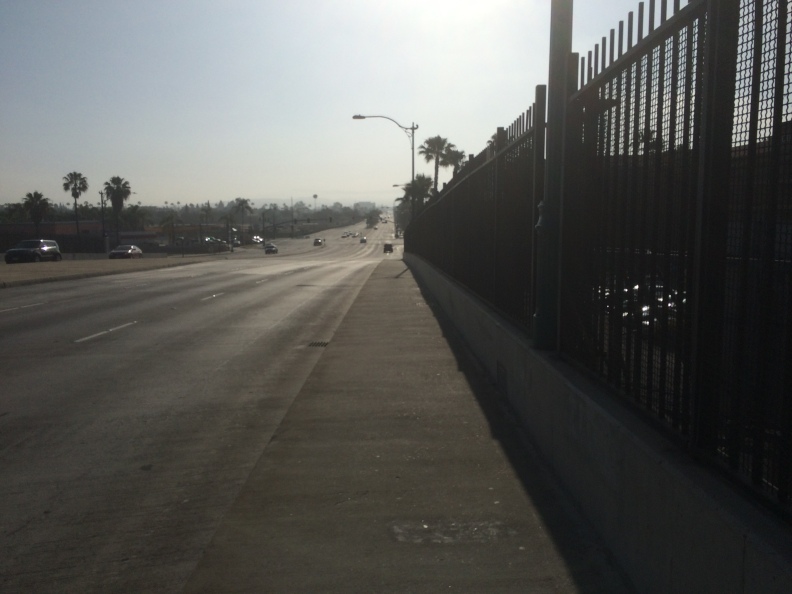 The good news? Once you get to the top, you get to head downhill! The Hotel Menage is at the bottom where you’ll turn. The intersection of Ball Road and Harbor Blvd. is one you’ll come back to in the 10th mile.

The bad news? Once you get onto Harbor Blvd., you get another overpass to climb. In all honesty, I kind of feel bad for the Pixie Dust Challenge runners. You get to run this same path two days in a row.

At the top of the overpass, you’ll see the Matterhorn in the distance to the right side. Somewhere on this second overpass, you’ll cross the 1 mile marker! Whew! You know how they say you should hold back on the first few miles of a half marathon and not go out too fast? Well, I think the Tinker Bell Half Marathon course really helps you do just that without even trying. The good news, though, is that your two toughest climbs are all in the first mile of the race. So, if the excitement of starting the race doesn’t get you through this and you feel tired, tell yourself that it gets easier.

What goes up must come down. What I like about freeway overpasses is that the downhill portion comes rather quickly. 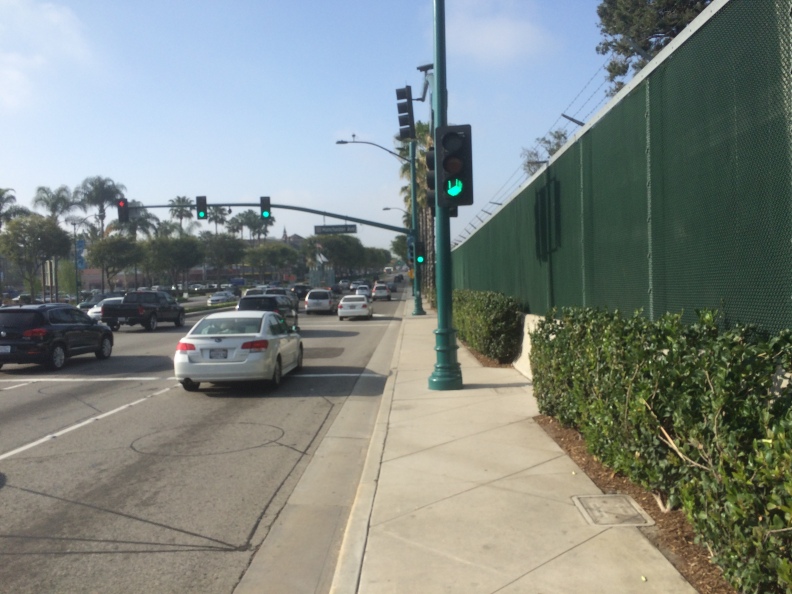 At the bottom, the excitement should really be building up. You’re almost inside the theme parks! This part is flat and you’ll see others ahead of you turning. 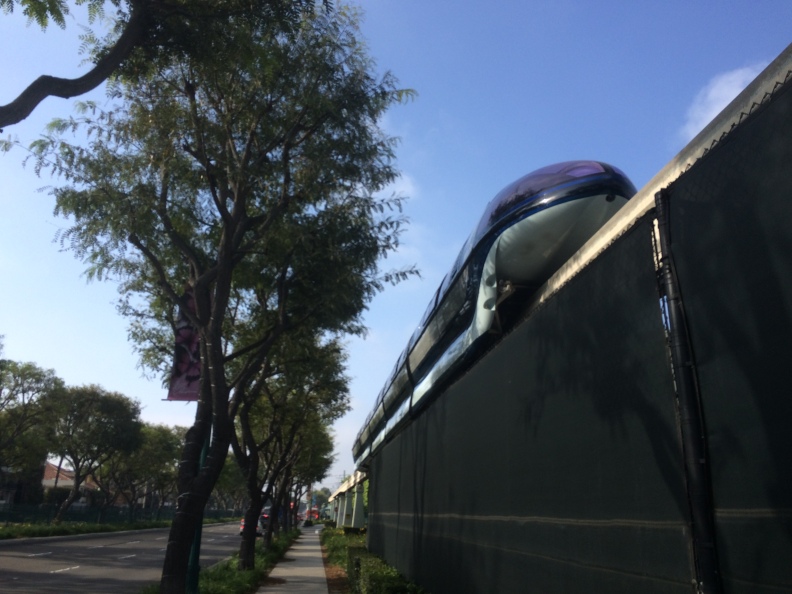 When I ran, the park was open. So, I got to see the monorail. You probably won’t. 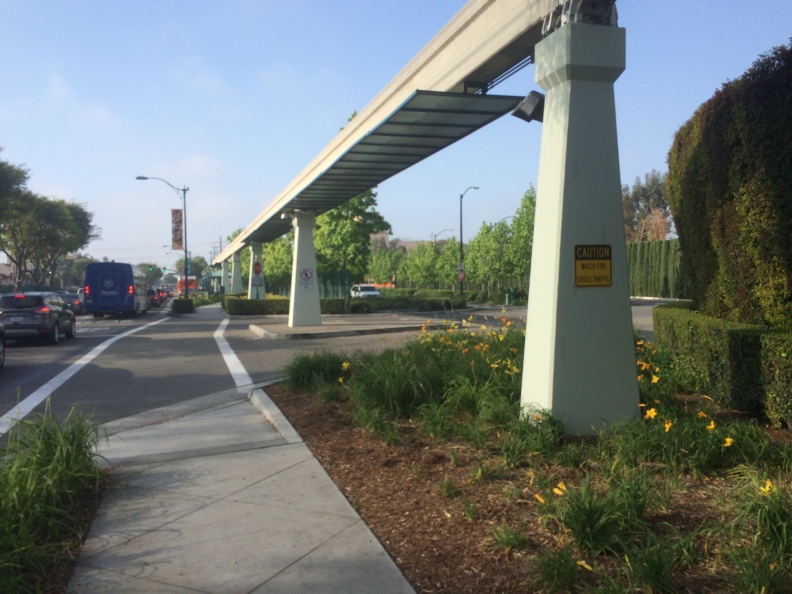 You’ll turn to the right here and head backstage! 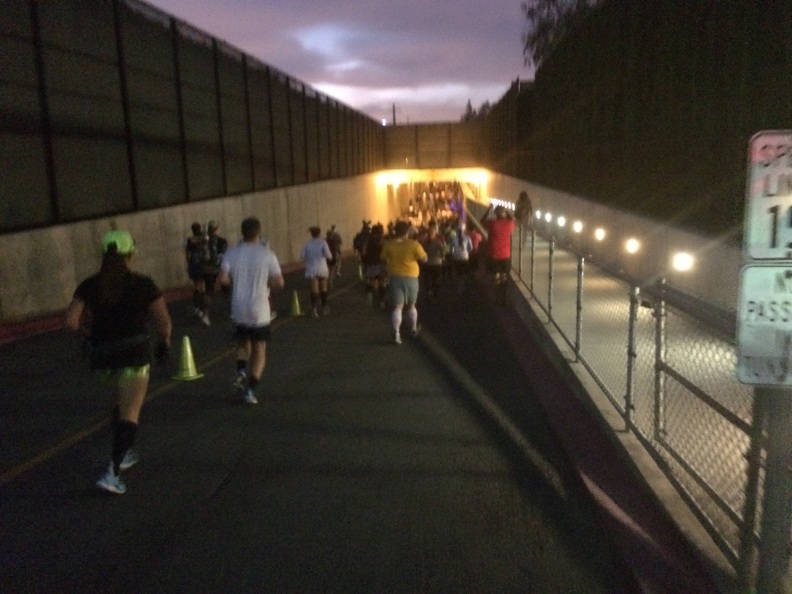 Get ready for your first time (of two) through the tunnel that connects backstage Disneyland and backstage Disney California Adventure. Be careful when you go down into the tunnel. It’s a rather steep decline. When we ran this during the Avengers Super Heroes Half Marathon, I saw someone lose control on the way down and nearly face planted. So, enjoy the downhill, but be careful. 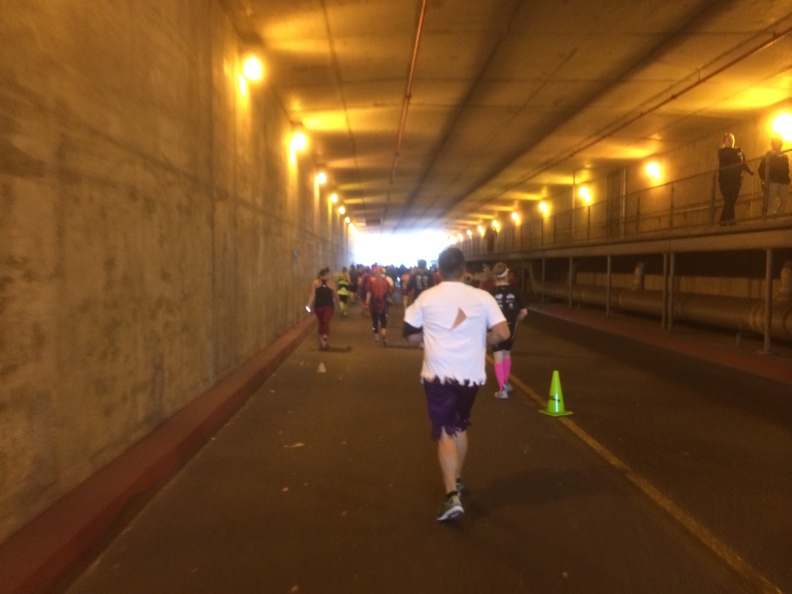 Running through the tunnel is kind of fun. At the end of the race, you’ll appreciate the various times they blow some awesome air conditioning your way! At the start of the race this won’t matter as much.

On the other side, you have to climb out. When I ran Tink in 2013, this climb was intimidating. As I’ve learned in subsequent races, this climb isn’t as bad as it looks. So, don’t let it psych you out. I think I could run up the entire thing in 30 seconds. So, if a run interval is in the cards, don’t back off. You can totally beat the hill! The best news is that, after this uphill, you won’t have to worry about another one until the end of the race. Also, you’re really close to entering DCA! 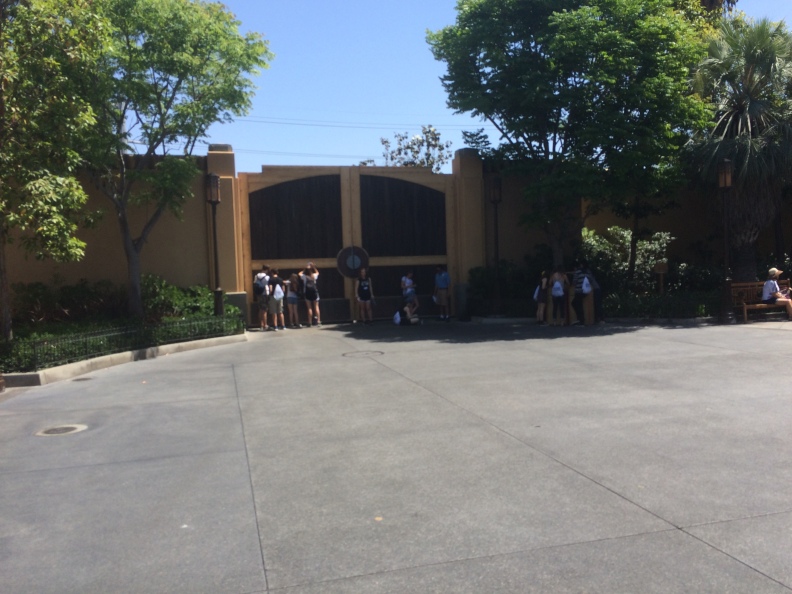 This is the view straight ahead.

To the left will be the Twilight Zone Tower of Terror. In previous races, I’ve seen plenty of people stop for a selfie here. It’s not a bad idea. 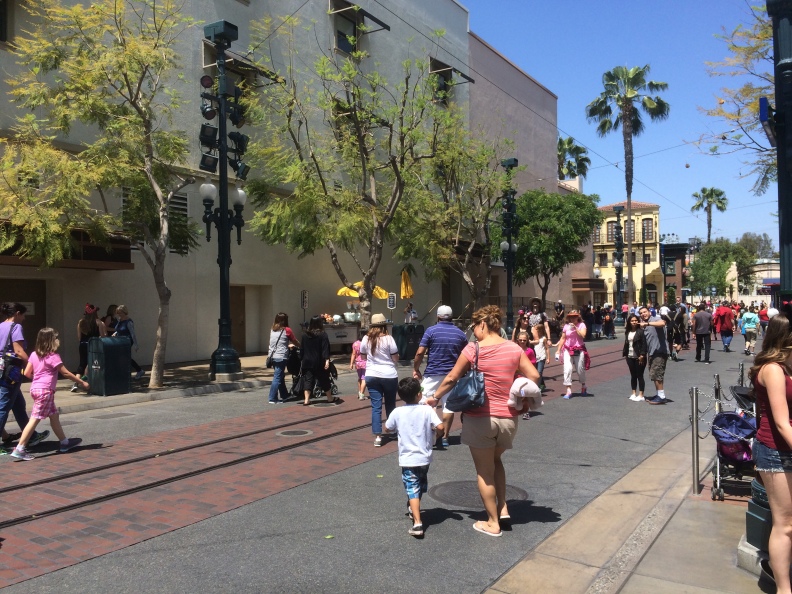 Very quickly after you enter DCA, you’ll be turning to the right to head into Hollywood Land. 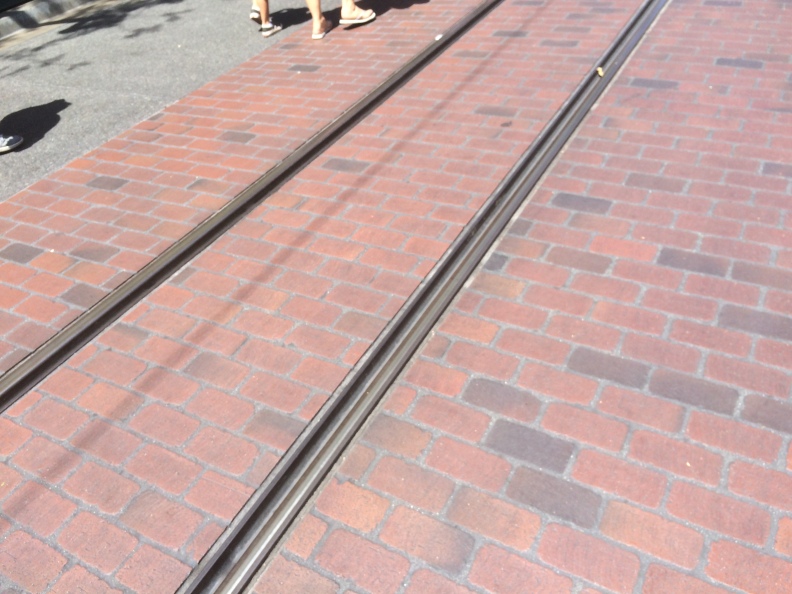 Watch out for the Red Car Trolley tracks. They go from here all the way up to the end of Hollywood Land.

You’ll pass by the Hyperion Theater (where the Aladdin show plays).

Right across from the Hyperion Theater is this fun sign. It’s one of the original logos for the Walt Disney Disney Studios. 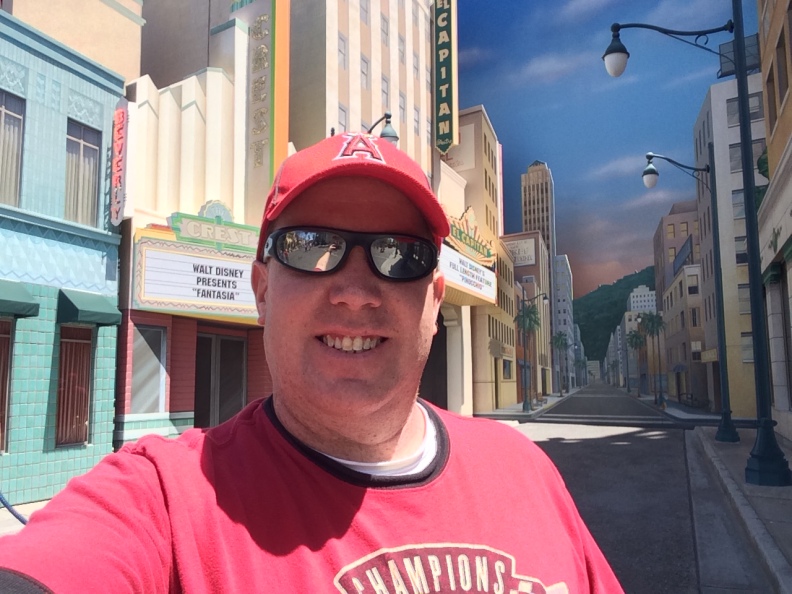 At the end of this little stretch, you’ll turn to the left. If you want a fun picture, you could stop to the right and grab this fun shot.

Or, you could just turn up Hollywood Blvd. in Hollywood Land. 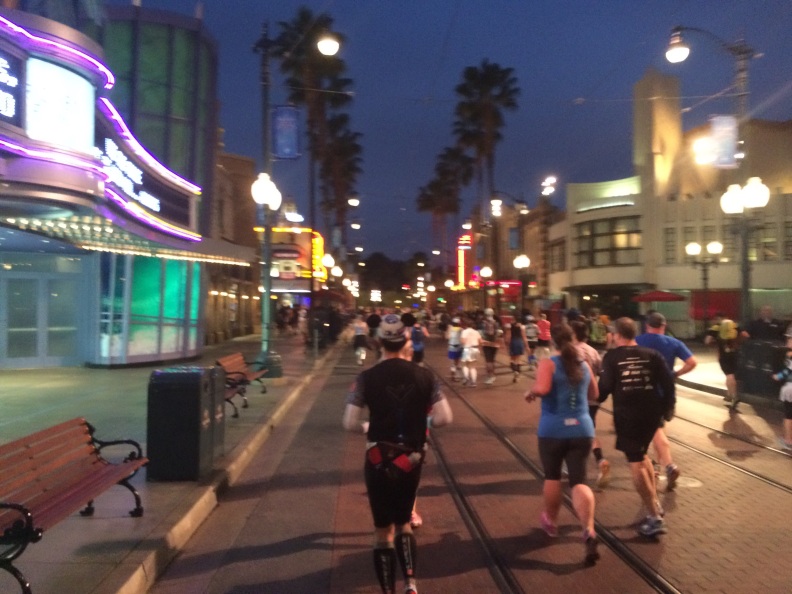 This is what it will look like on race day! 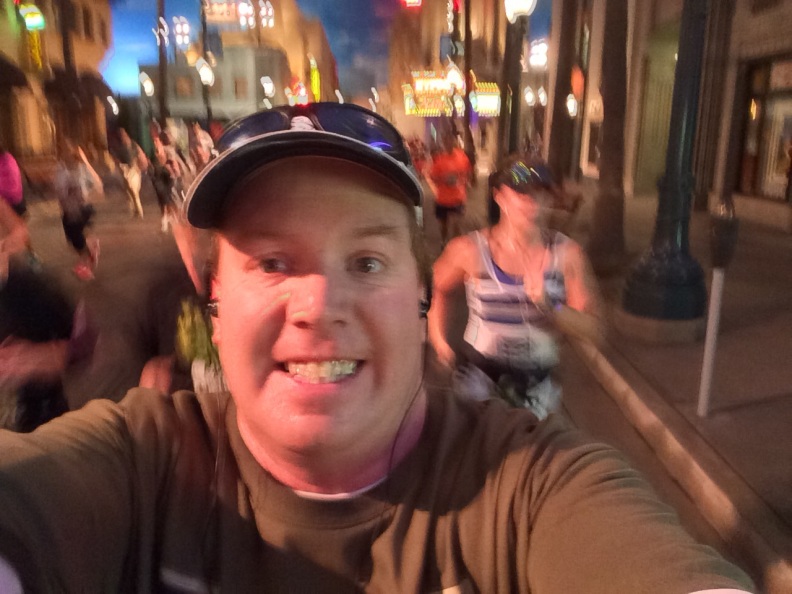 Sometimes the folks from Marathonfoto are out here for pictures. Sometimes they are not. I like this spot for a selfie. Too bad this picture came out blurry.

If you need to use the restroom, look for this building to the left. Just past the Art of Animation building is the first real restroom of the course!

The restroom is back in this area.

If you see the Carthay Circle Restaurant, you’ve gone too far to get the picture. This is where the course turns again. 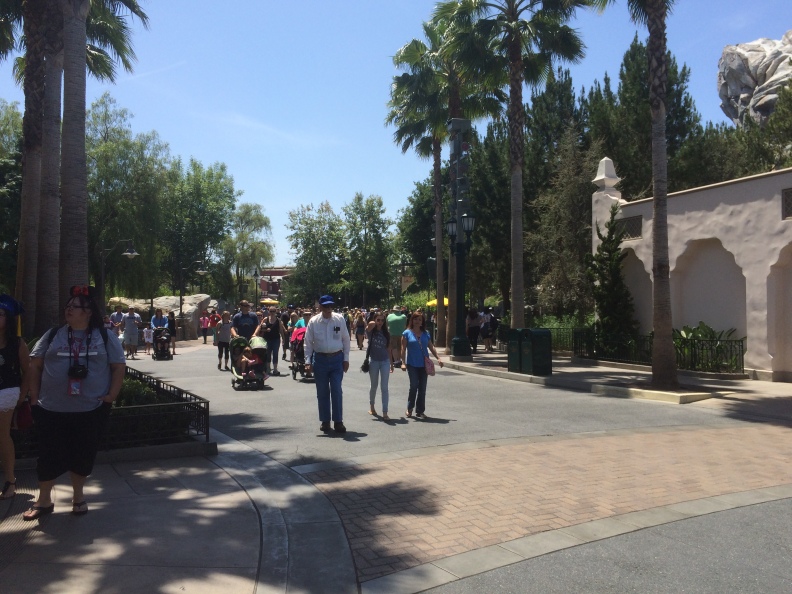 From here, you head off towards Cars Land.

If I’m reading the course map correctly, you’ll go through this area twice. So, there may be two-way traffic and you may see runners coming up towards you.

Here the part of the course, I’m making some guesses about. I think you’ll turn to run down Route 66 here. Although, after looking at the map later, I realize that you could be running through It’s A Bugs’s Land instead. So, forgive me if I’m wrong about this part. 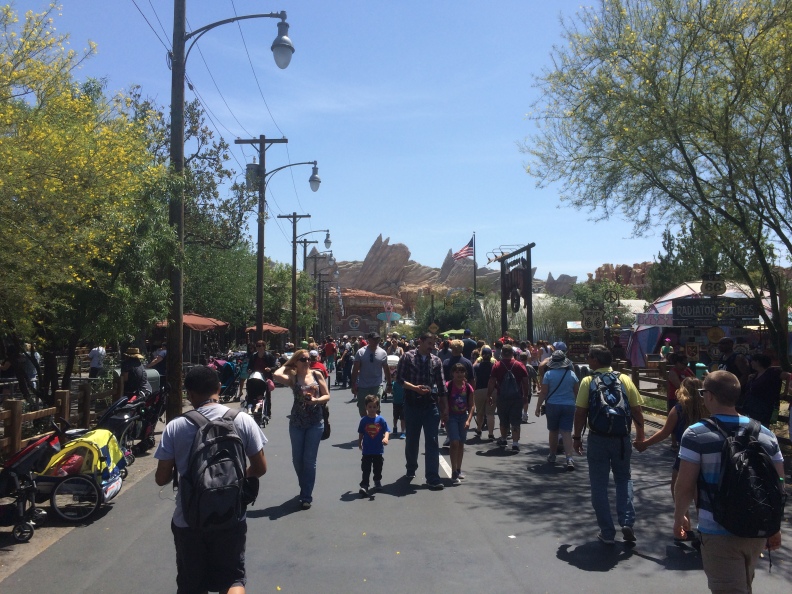 Heading down Route 66 (aka Cars Land) is really fun! It’s like you’ve run into Radiator Springs!

Everything is arranged just like the movie Cars! This is Mater’s Junkyard Jamboree!

Sarge’s Surplus will be off to the right, just past Mater’s. The next opportunity for a real restroom is just past Sarge’s.

Follow the path here to get to your second real restrooms on the course. 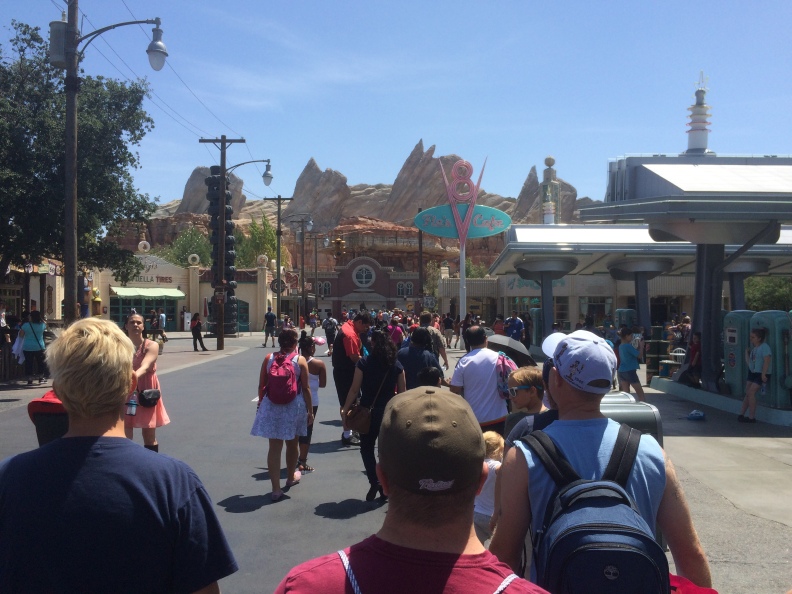 From there, you head towards Flo’s V-8 Cafe. 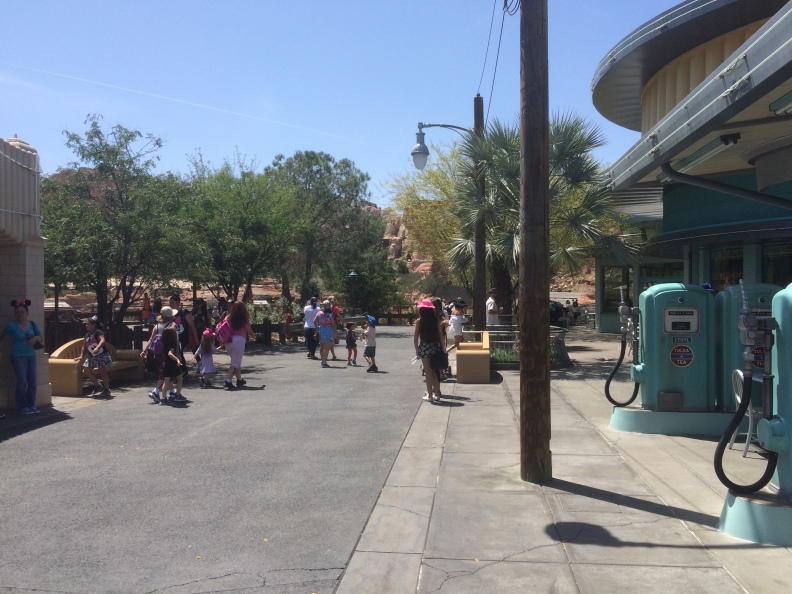 The course appears to turn to the right just past Flo’s.

At the Disneyland Half Marathon, they had Lightning McQueen and Mater here at the turn. Although, they don’t always reside here for the races.

As you head on along the course, you’re coming up to some really great spots for race photos. I love running through this part of DCA! 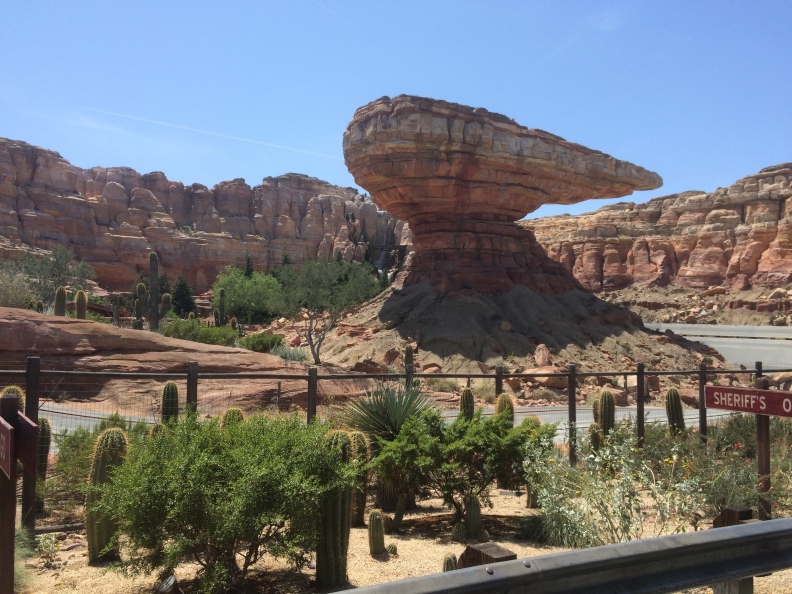 There can be some really cool shots along this part!

Again, I’m guessing here. However, one you’re out of Cars Land, I believe you’ll head through these gates backstage. The course map looks like you’ll wind back behind attractions like California Screemin‘ and the Paradise Pier.

You’ll re-enter the theme park at this gate.

This is what you’ll see as you enter DCA again. 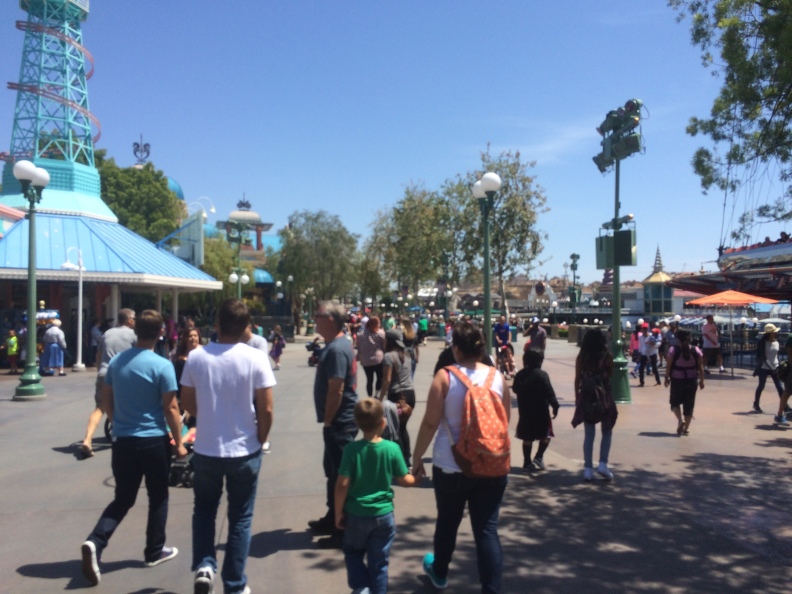 The course has some natural turns like this one as you make your way towards The Little Mermaid attraction.

As you get closer to the Little Mermaid attraction, you’ll also start to see people venture off to the right to get a picture with Mickey’s Fun Wheel.

The course continues up to the Little Mermaid attraction. 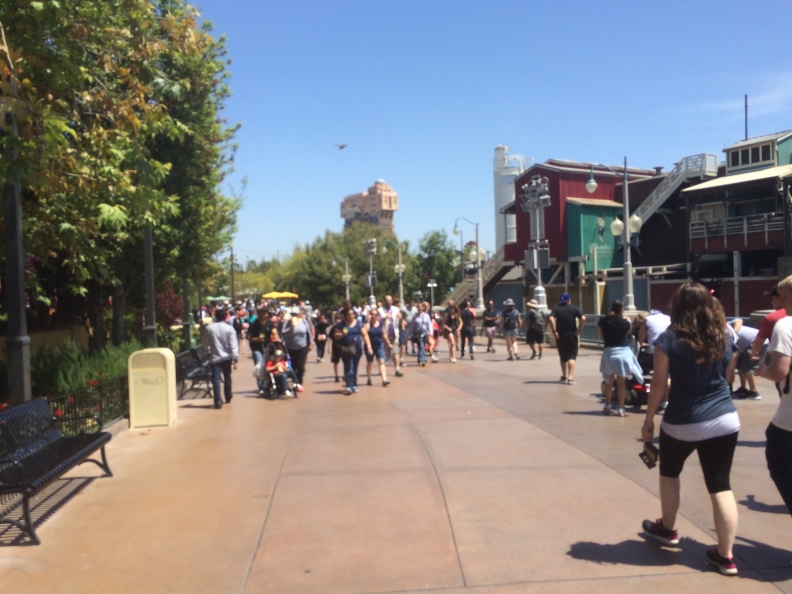 The course continues up past San Francisco Street and makes its way back to the front of Disney California Adventure.

As you get around this corner, you’ll probably see some runners going the other way as they head where you’ve already been. I envision two-way traffic.

You’ll notice this waterfall on your way to Cars Land. If you want to snap a picture of it, I’d suggest that you wait until you’re heading out of DCA as it will be easier to get a good picture.

As you approach the Carthay Circle Restaurant for a second time, you’ll have a second chance for a photo with the Storyteller’s Statue on your way out. This picture is on Buena Vista Street. When you get here, you’re almost out of Disney California Adventure. 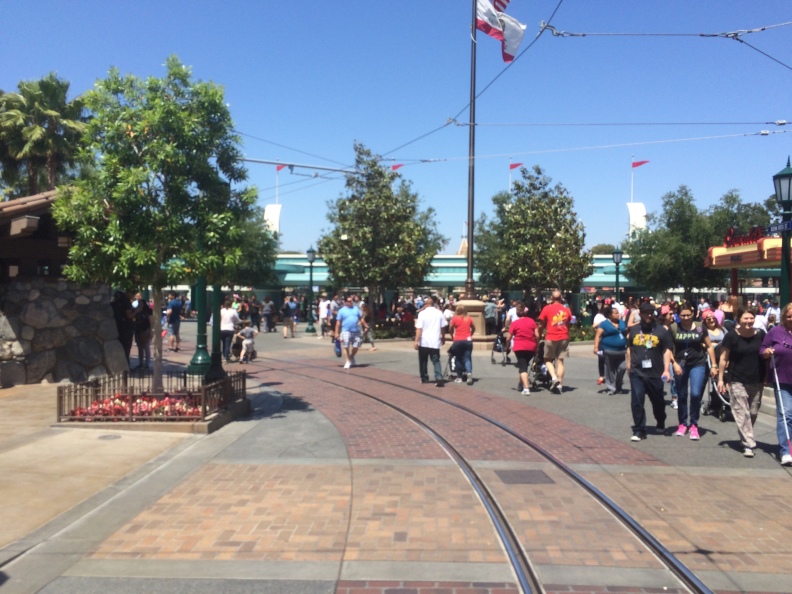 Almost to the front gates. It does look like you’ll be running through them.

From there, you’ll head from the front gates of Disney California Adventure, across the Esplanade, to Disneyland!

Running through the Esplanade is always fun. Every time I’ve run across the Esplanade, there are always a lot of people out to cheer you on. As a matter of fact, this is a good spot to advise your supporters to come and watch. Let’s just say that, no matter how tired you may feel, running through the Esplanade will give you some energy. If that doesn’t do it, the knowledge that you’ll be entering the Happiest Place on Earth…aka Disneyland, should do the trick. I always feel an extra boost of energy here. I’m sure that you will, too. That’s all for this installment. Come back tomorrow as we head into Disneyland! See you tomorrow!