As you all know, I love music and need good tunes playing in my ears while I’m running to get me through the many miles I run. Putting together a playlist for the Los Angeles Marathon has been a crazy experience. I had a pretty good playlist for my half marathons. However, putting together a little more than 6 hours worth of music can be challenging. Here’s what I’ve come up with…

The first part of the list hasn’t changed much since the Star Wars Half Marathon and Surf City USA Half Marathon. I added Good Morning Baltimore from the Hairspray soundtrack to the beginning. This song puts me in a good mood, but isn’t a song with a fast enough tempo to place anywhere except for the early parts of the race. With the words “Good Morning,” in the title, it seemed like a fitting first song. I also added Gonna Fly Now from the Rocky movies to be my second track. This track has opened my playlist many times before. Since I needed to add tunes, it was an easy add. Also, I had taken When We’re Human from The Princess and the Frog out of the playlist after the Disneyland Half Marathon. Well, when you need 6 hours worth of music, go with what you’ve had success with before again. So, back it went into the list. Otherwise, this is the same list that I used for Star Wars and Surf City USA Half Marathons. 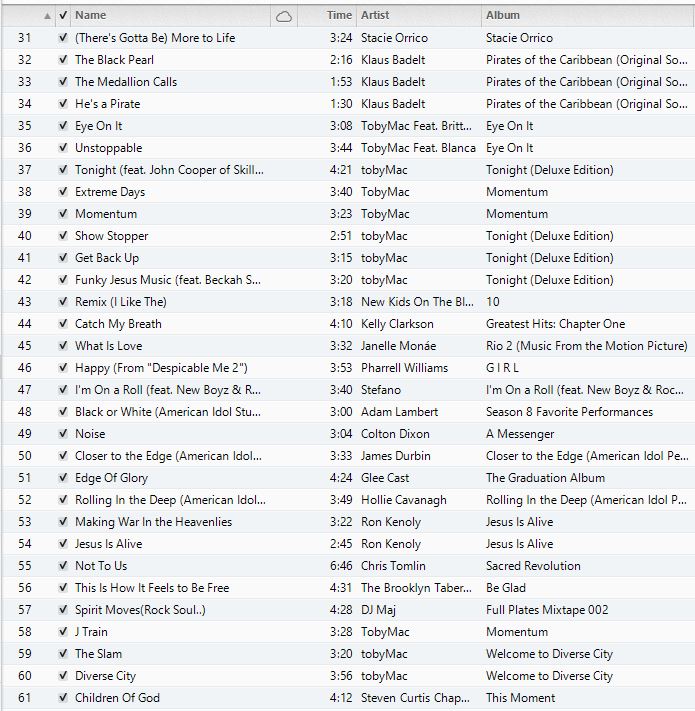 The next part has some more alterations. I added He’s a Pirate from the Pirates of the Caribbean soundtrack to make up a 3 Pirates of the Caribbean block. This is up 1 track from what I’ve been using. The Pirates music has proven to be wonderful to run with. So, adding another track shouldn’t be too much of an issue. Also, for my previous 2 half marathons, I had broken up some of my tobyMac block of songs a little. I decided to keep them all together this time around. For the marathon, I’ve also brought back What is Love from the Rio 2 soundtrack. I used this pairing with Happy from Despicable Me 2 for the Disneyland Half Marathon and loved it. So, it’s back.

Edge of Glory is the end of my half marathon playlist. This is where the work really began. I’m thinking that I should be in the second half of the race by the time I get to Making War In The Heavenlies. This is where I decided to put together some worship music songs. The intro to this song is perfect for setting up the second half of my playlist. I will be experimenting with this part of the list this week in my morning runs. The songs seem like they should work. If they don’t work, I’ll have to make some changes to this part. With the exception of Making War In the Heavenlies and Jesus Is Alive, I’ve run with all of the tracks before. This block sounded great when I was putting them together. Hopefully, they’ll help me through the start to the second half of the marathon. 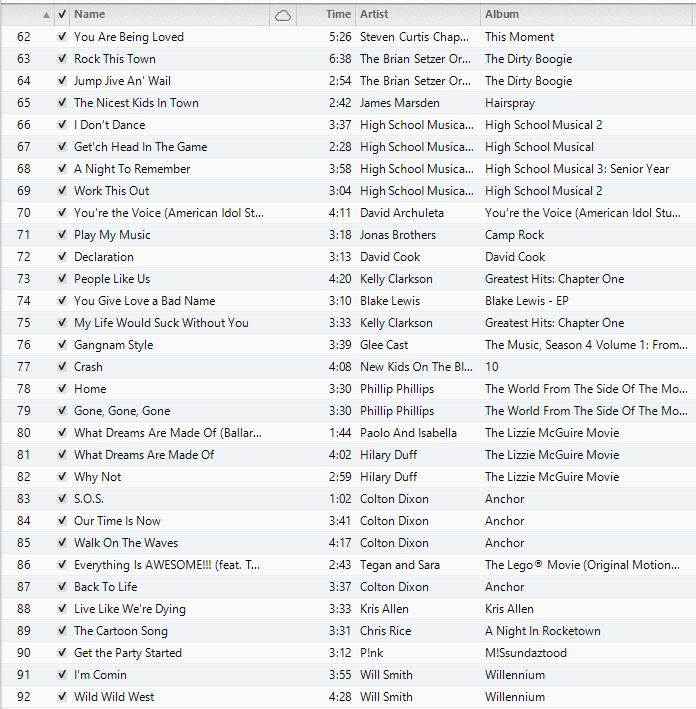 Back from my Disneyland Half Marathon playlist is a Jump Jive An’ Wail as part of a 3 song big band block. The Nicest Kids In Town will be a new song to run with. However, I don’t think this song will be a bad one to run with and if fits nicely where it’s at. From Big Band, I’ll move to a second block from the High School Musical movies. I’ve run with all of these songs before. Home and Gone, Gone, Gone by Phillip Phillips are my gambles in this part of the playlist. I’ve never run with them and don’t think I’ll get to. When you’re running 30 seconds, walking for a minute and a half, the gamble isn’t too much. It’s 7 minutes. Of that, I’ll only have to run 2 minutes at the most.

The Colton Dixon block of 3 songs is one that I’m really excited about. I haven’t run with these tunes yet. However, as I put together my list, I was really excited about them. They will come somewhere in my last 6 miles of the race. The words in Our Time is Now seem like exactly what I’ll need to be hearing at this point of the race. I also like the imagery from Walk on the Waves. Then, there is the fun Everything is AWESOME!!! from the Lego Movie. When you’re getting to the last 6 miles of a marathon, you need all the positives you can get. So, I wanted this song to be in the last 6 miles. Then, I’ve got Back to Life and Live Like We’re Dying. LOL! By the time I got to this portion of the list, I was thinking about what I wanted to hear. These will be great.

After that, I’ve reached way back in Christian music history for The Cartoon Song by Chris Rice. It’s not an energizing song, but a really comical song. Hopefully, it’ll give me a good laugh before gearing up for the final push to the finish. Get the Party Started by Pink came in a 90 on the list a mental boost. I’m hoping to be at a point of the race that is the final stretch. So, let’s get that final stretch started. I followed that up with Will Smith’s I’m Comin’. Again, I’m putting messages in my ears that I think I’ll need to hear at this point. Hopefully, it will be…finish line…I’m Comin’.

This last section takes me beyond where I hope to finish. I’ve put in some more worship songs before Overcomer by Mandisa. I’m really hoping that Overcomer and The Climb are the last two songs for me in the marathon. It would be pretty amazing if I finished to The Climb. However, if I’m slower than 6 hours, I’ve added the rest. Finishing to Who Will I Be? from Camp Rock wouldn’t be too bad of a song to finish to either.

Unlike my 2014 Disneyland Half Marathon playlist, this one is not as geared towards specific mile points of the race. I don’t want to be concerned with my pace until I get into the last 3-6 miles. As you can see in the first image, this list takes 6 hours, 12 minutes. If you look at my pace for the 20 and 23 mile training runs, it indicates that I should finish somewhere between 6 hours and 6 hours 11 minutes. So, hopefully, I will not be running beyond what is on this list. Chances are, if I am still going beyond the list, music won’t help me. If this happens, I will most likely be out of my run/walk intervals. So, I can always go back and find something to get me to the finish.

6 hours, 12 minutes worth of music. The playlist is now set!