The last hard week of training before the Los Angeles Marathon is now in the books and I am in “taper town.” Before entering the taper period for the LA Marathon, I had this one last week with my longest training run…23 miles this past Saturday. Let’s look at how the week went.

Tuesday kicked off the training this week (and most weeks) with another sub 33 minute, 3 mile run before work! Since I’ve been skipping the Tuesday runs lately (with some weeks more successful than others replacing the Tuesday run with a Wednesday one), I really wanted to have a week that went exactly as scheduled. With Monday being President’s Day and a day off from work, there was no excuse for not getting to bed on time. The result? My fastest 3 miles before work yet! I finished in 32 minutes, 46 seconds. Everything about this run felt amazing! The first mile was my fastest first mile in quite some time as I finished it in under 11 minutes. My run the Thursday before and the Saturday before were ones that produced these “ah ha” moments. I am capable of running faster for longer than I will ever give myself credit for. Tuesday, I pushed myself to see what I could do. All three miles were ones where I could feel the difference.I was still using the same run/walk intervals as I have been doing. It’s just that I pushed myself in the run intervals to run harder. On Tuesday, I wanted to see what would happen if I did. The result was my fastest 3 miles before work!

Since I made it out on Tuesday, I was able to rest on Wednesday. On Thursday, when I woke up, I almost didn’t go out. I employed my 20 minute rule and was still not feeling it. However, as I scanned Facebook and saw so many friends heading out for the runDisney Princess Half Marathon Weekend, it was all the motivation I needed to get out the door. I was sleepy and tired. So, I thought this would be the run that brought be back to earth…speed-wise. I got to wear a new shirt that the folks at Champion USA have provided me with. It might be my LA Marathon shirt. Thursday morning was cold and foggy. This week, we’ve had June-like weather out here in So Cal…gloomy in the morning and sunny by the afternoon. It was kind of cool to be running in the fog. I have no idea why I enjoyed this so much. The first mile felt slower than Tuesday. However, since I thought I would be slower, I didn’t think too much about it. All I thought to do was make sure I ran at each and every run interval and leave the results to what they would be. It was a great strategy and took the pressure off. I’ve been learning lately that I can’t predict my finish time until the third mile anyways. On Thursday, I was slower…by a whole 3 seconds. On a day where I didn’t really want to run, I’ll take it!

On Saturday, I had 23 miles to finish. The original plan when I charted everything out, was for this to be a 26 mile run. However, with the missed 20 mile run in January, I had to make adjustments. One adjustment was to make the 23 mile run a 20 mile run and the 26 mile run a 23 mile run. Two weeks ago, I was thrilled that I made it 20 miles. So, on Saturday, I was out to see if I could keep my run/walk intervals for a longer time. As you might recall, I held my intervals two weeks ago through the end of mile 17. I would love to PR the LA Marathon. So, this Saturday, there was a little more pressure. I wanted to increase the distance I held my run/walk intervals to 20 miles and I had a minor goal of beating my previous 23 mile attempt. As I prepared for the 2014 Walt Disney World Marathon, I ran 23 miles in 5 hours, 29 minutes, 27 seconds. It would be fantastic if I could beat that time, but not necessary.

I’ll cover this run in more detail tomorrow. However, for today, I just want to touch on a few points. First, I ran this training run faster than I had two weeks ago when I attempted 20 miles. If only I could have run the Surf City USA Half Marathon this well! 2 hours, 50 minutes, 53 seconds at the half marathon distance would have been my third fastest half marathon. Of course, if I was only running a half marathon, I might have pushed my pace towards the end and could have pushed faster.

My 20 mile time was around 11 minutes faster than two weeks ago! I was able to keep my run/walk ratios going for almost the entire 20 miles. The last couple miles were very hard. As I got to each run interval, I reminded myself that I was running past what I had done two weeks prior. That’s why if felt hard. By the end of 20, I was content to just walk out the remaining 3 miles.

Along the way, I ran into this guy! Who says character picture stops are only for the runDisney races? I know that there won’t be any special characters along the LA Marathon course. But, I couldn’t resist the picture opportunity. Especially after seeing the pictures from the Princess Half Marathon.

Remember the time I wanted to beat? 5 hours, 29 minutes, 27 seconds from my training for the 2014 Walt Disney World Marathon? Look what happened! I beat it by a little more than 3 minutes!

Yes, I would say that I had a successful run on Saturday! I hit both of my goals for the day….I kept my run/walk intervals for 20 miles and I finished faster than my previous 23 mile training run! 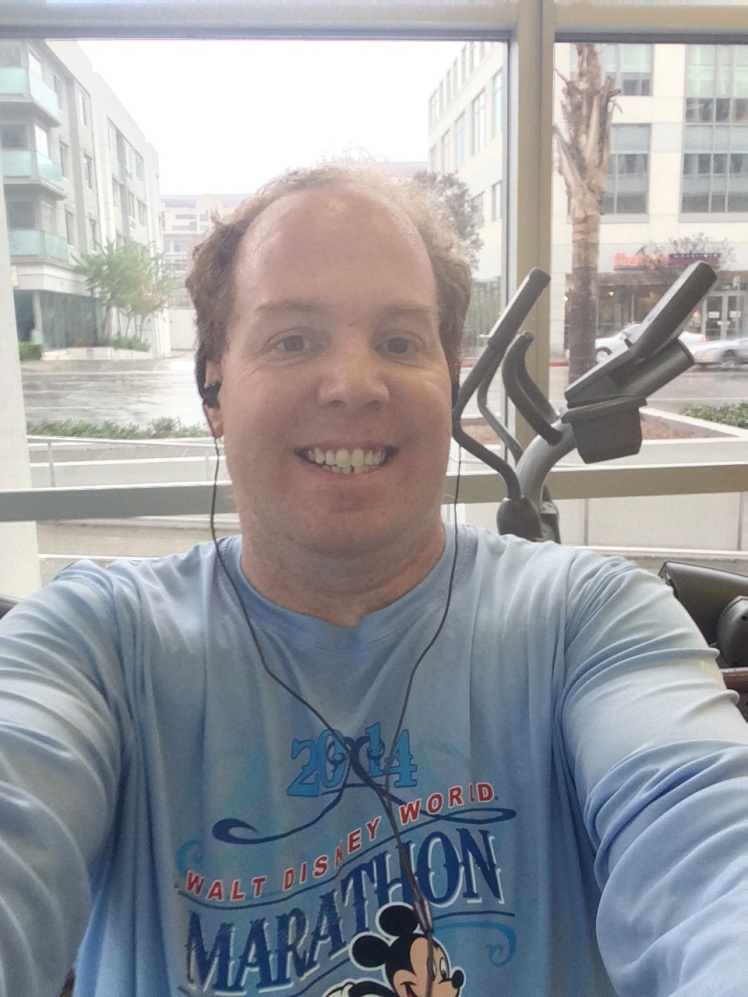 On Sunday, I was back at the gym for a workout. As I’ve started reading about how to do a proper taper period before a marathon, I decided to scale back my gym workout beginning Sunday through the marathon. I took out the running on the treadmill and the leg press machine. However, I did time on the elliptical machine, chin ups, dips, and ab work. All of that was deemed okay from what I’ve read. I really want to taper well for the Los Angeles Marathon. Considering all of that, it was a great workout! 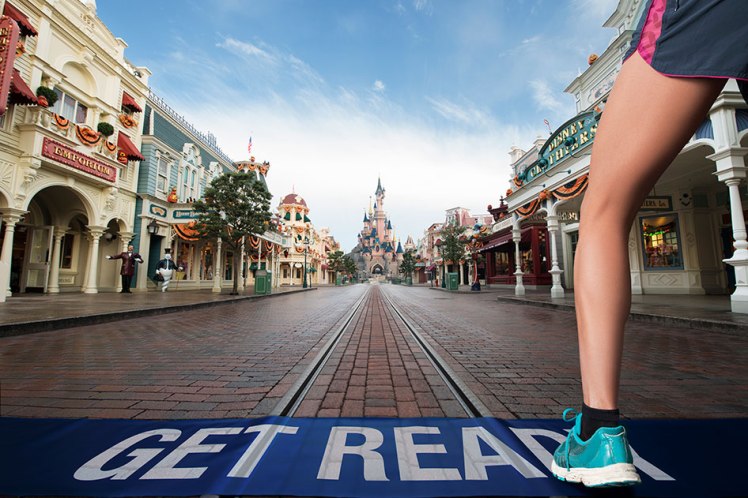 On Sunday morning, I woke up and saw this piece of runDisney news all over Facebook and Twitter. Run Disney has announced that there will indeed be a half marathon weekend at Disneyland Paris! From what I could gather, the announcement was made just prior to the start of the Princess Half Marathon at Walt Disney World. While there aren’t too many details about this race just yet, we do know that the race will take place September 23 – 25, 2016. To sign up to be notified when registration will open for this inaugural event, click here. With all that runDisney does to promote their events, I’m pretty sure that this event will sell out quickly. Rumors of a half marathon at Disneyland Paris have been buzzing around for a little more than a year. Now that it’s official, there were plenty of people buzzing Sunday morning. I must admit that runDisney handled this announcement right. Given the expense of flying to Paris for a race, they have given us plenty of advanced notice for us to save up our pennies. After all, we have way more than a year to figure out if we have the budget to head over to Disneyland Paris for this race. Now if i could just figure out how to win the lottery so I could go. I can’t help but wonder how this news will affect sales for challenges like the 2016 Dopey Challenge. How many folks, who were planning on doing the Dopey Challenge, might postpone the Dopey in favor of financing a trip to Paris. Hmmmm.

Lastly, my weight loss goals have hit a snag lately. In week 7, I hit a wall and did not eat well at all. That resulted in a second consecutive week of weight gain. I gained 1.4 lbs while maintaining the same body fat percentage.

While I’m not back to my week 6 or week 5 weight as of yet, I did manage to lose 0.34 lbs. this week! Also, I lost 1 percent body fat! This weight loss journey is a marathon unto itself. I may have hit a week where I just didn’t want to go for it back in week 7, I have rebounded nicely. In the taper period for the Los Angeles Marathon, one of my goals is focus more on this weight loss journey.Without the big miles, I’ve got no excuses to go out of control with eating. The week of the Los Angles Marathon will pose another challenge week as I’ll want to be carbo loading to get ready for the big day. That’s three weeks from now. So, for this week, I’m happy that I got back to weight loss and look to continue this trend over the next couple weeks.

This has been an amazing week y’all! As crazy as it sounds, I’m ready for the Los Angeles Marathon! Welcome to taper town! 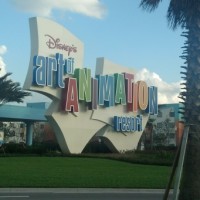 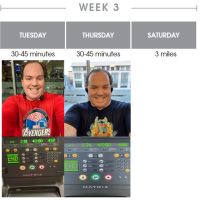