Since the middle of August, I’ve been a morning runner. It’s hard to believe that, what began as an experiment, has become what I do. If you are apart of running circles, you have heard those morning runners go on and on about how great running in the early morning is and how they have eliminated excuses to miss their runs because they run in the morning. Well, I started this experiment to find out if it was true. 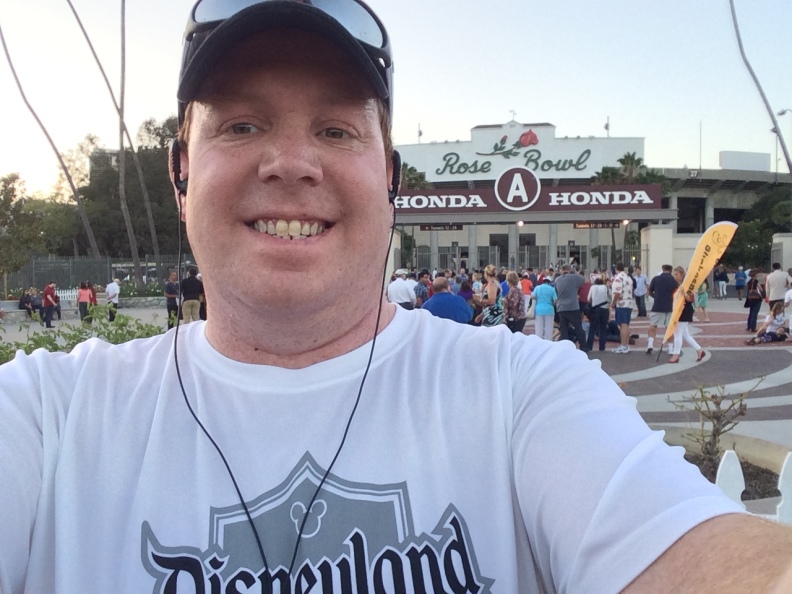 Let me start off by saying that I am not a morning person at all. I really miss running around the Rose Bowl loop in the evenings. For me, the advantage of evening running is that I could vary my distances and locations much more than I can in the morning runs. Maybe sometime in the future, I will be able to convince myself to get out of bed even earlier than I do now and can find this same flexibility. However, when I was running at night, I almost always had a choice as to where I would run. Also, If I wanted to increase the distance, it only meant that I would have less down time at home before going to bed. In the mornings, I have to be finished by a certain time or risk being late to work. While I sacrifice the flexibility in distance and location, I gained the peace of waking up with the city. In the early morning, there are far fewer cars and people out and about. At the beginning of my morning runs, there are usually very few people out. As I near the end of my run, you will start to see more people and more cars on the road. However, it is rather peaceful to run in the early mornings.

My morning runs are now starting off with a lot of darkness. It almost feels like running at night. However, it is fun to see the sun begin to come up as I go along. This brings me to a second advantage of morning running…cooler temps. With the sun not being up yet, the temps are usually cooler than I’ve been used to in the early evenings. I should mention that one of my runs was with temps in the 70’s. What was interesting about that warmer run is that it didn’t feel that warm. So, running in the morning is better because of the cooler temps.

One thing I was really concerned about before my first run before work is how tired I would be at work. After all, if I was tired after my night-time runs, I could always go to sleep earlier that night than usual. However, if I was tired after a morning run, I still had to face 8 hours of work. My new job is a very busy kind of job. So, I need all the energy I can get. What I found out is that I am no more tired or less tired than I am on the days where I get to sleep that extra hour. Knowing this has helped me to run much more freely in the morning. That freedom has led to faster times. I’m no longer worried about how a fast run will affect my energy for the day at work. Some runs tire me out more than others. However, I still find around the same amount of energy in the days I run vs. the days I don’t. My energy level dips roughly about the same time of day. It’s kind of crazy how this is working out.

Here’s the myth that a lot of morning runners say all the time. Running in the morning eliminates excuses to miss a run. Maybe if you’re naturally a morning person who loves being up before the sun, this is true. However, for the night owls like myself, I’ve learned that there are excuses you can come up with to miss a morning run. All of us have nights where we don’t sleep so well. There are nights where you just can’t get to sleep early enough to get the kind of sleep you require. So, you choose to skip that morning run. See? An excuse. So, there are excuses to miss a run in the morning. The thing is that there aren’t as many as there are to miss a run in the evening. The hardest part of running in the morning for me is getting out of bed. Since August, I’ve learned that, most of the time, about 20 minutes after getting out of bed, I’ll be feeling okay enough to run. When that alarm clock goes off and I don’t want to get out of bed, I try to tell myself to give it 20 minutes before giving up on the morning run. Thus far, only once, when I’ve actually given myself that 20 minutes, have I missed a run. My other morning misses came because I didn’t give it a chance.

Another good reason for morning running? Those runDisney races start early! I’m not advocating that you get up at the same time you’d get up for a runDisney race 2-3 times a week. Not too many people want to get up at 3 or 4am that many times every week. However, I’m convinced that by getting up at 5:30am 2-3 times a week will actually help.

I am now a morning runner. I am such by circumstance rather than by choice. The mornings are what work best for me. I work hard at my new job with Disney. It drains my energy by the end of the day. So, I just don’t have it in me to get out and run. Since there isn’t any noticeable drop off in energy at work from the days where I run in the am vs. the days I don’t, the mornings are when I’ll run. What’s crazy to me about all of this is that I always feared running or going to the gym in the morning BEFORE work. I feared that it would make me too tired. I hated the idea of getting up earlier than I needed to in order to make it to work on time. My previous position with Disney started 30 minutes later than my current job. So, it makes absolutely no sense for me to begin my story as a morning runner now. Yet, here I am…a morning runner. If you’re struggling to get your afternoon/evening runs in, try running before work for one month and see how it goes. You just might surprise yourself. I know I did.

7 Replies to “Morning vs. Evening Running – My Thoughts”