This is the first of a three-part blog post series on the Avengers Super Heroes Half Marathon course. Of the three, this is the post that is the most speculative. Since this is an inaugural year for the race, the time in the theme parks has never been run. I did my best to figure out how I think the time in the theme parks will go for this race. The rest of the series incorporates pictures I took from this past weekend and the Disneyland Half Marathon to give a you a good idea of what you will see along the race route. I looked at the race map for this post and made my best effort to figure out where in the theme parks we will run. So, here we go.

Above is the route from the start through Disney California Adventure.

The race starts somewhere around here. 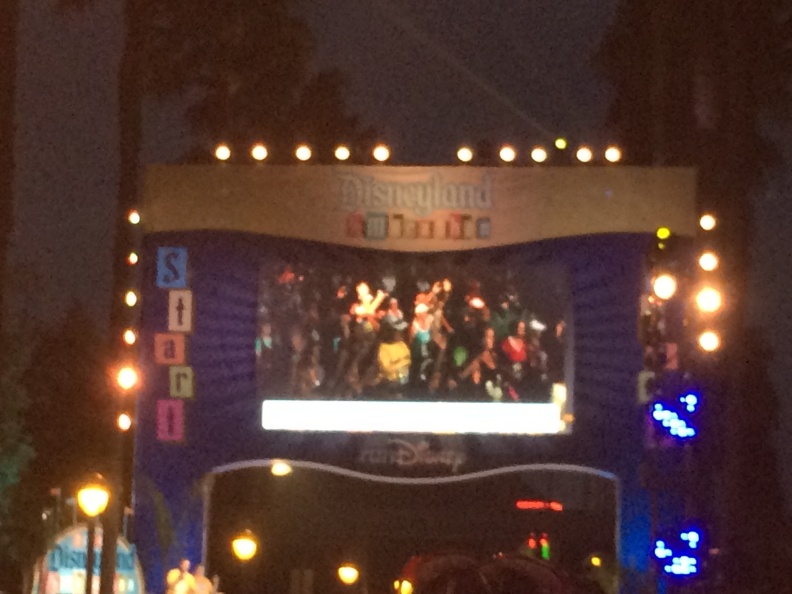 When you get close to the start, the excitement really begins…or the fear.

You start off heading down. The course dips under Downtown Disney. Then, you go up on the other side. The drop isn’t very long or far down. So, coming back up is not terribly hard.

Just like the Disneyland Half Marathon, you will head towards Katella Avenue. Unlike the Disneyland Half Marathon, you will turn left before you get to Katella Avenue. If you’ve run the Disneyland Half Marathon, you probably recognize this picture. This is where you come out at the end of the race. You will do the same in the Avengers Race. However, you also will start off running through the backstage area at Disney California Adventure here. So, you’ll head up with Mickey’s Fun Wheel and California Screemin‘ in your sights.

I believe you’ll make a turn at the same place as the Disneyland 10K race made their turn to get to the onstage area. 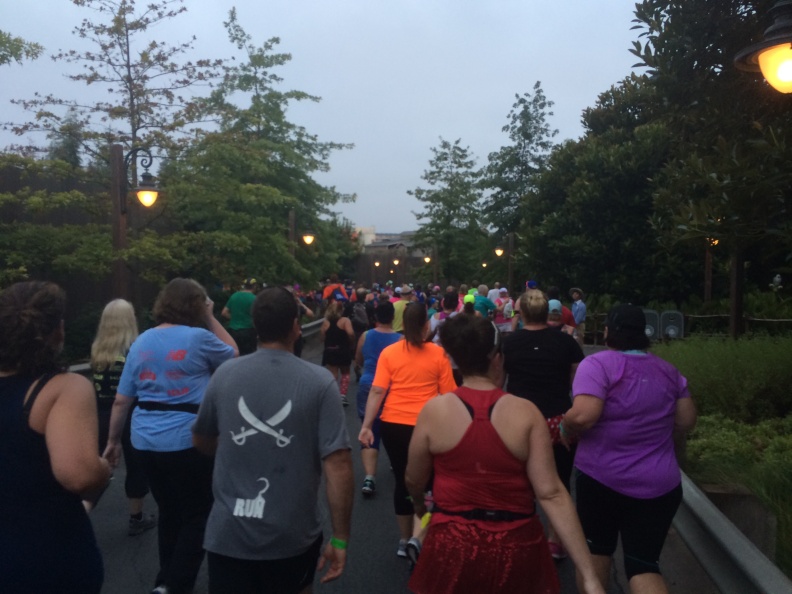 You’ll come onstage at the pathway that will take you to Cars Land (one way) or Bugs Land (the other way). 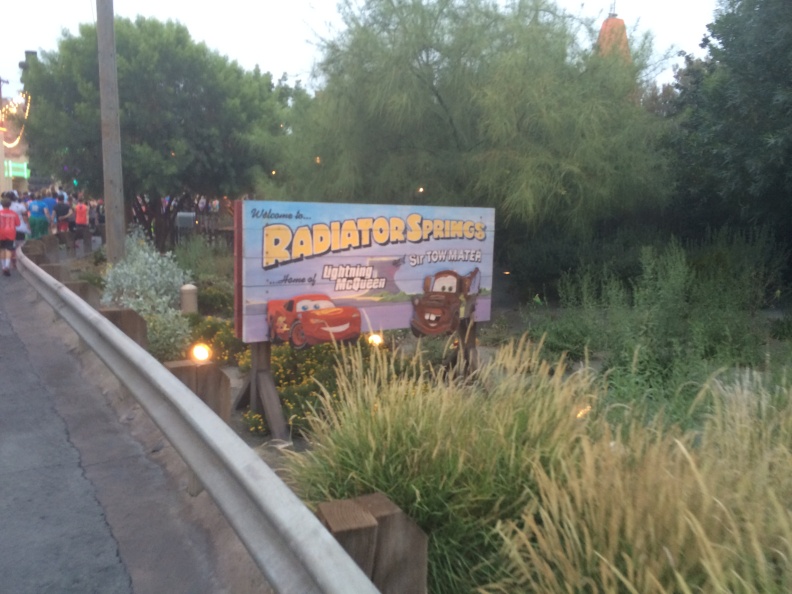 So, the race will head towards Cars Land. 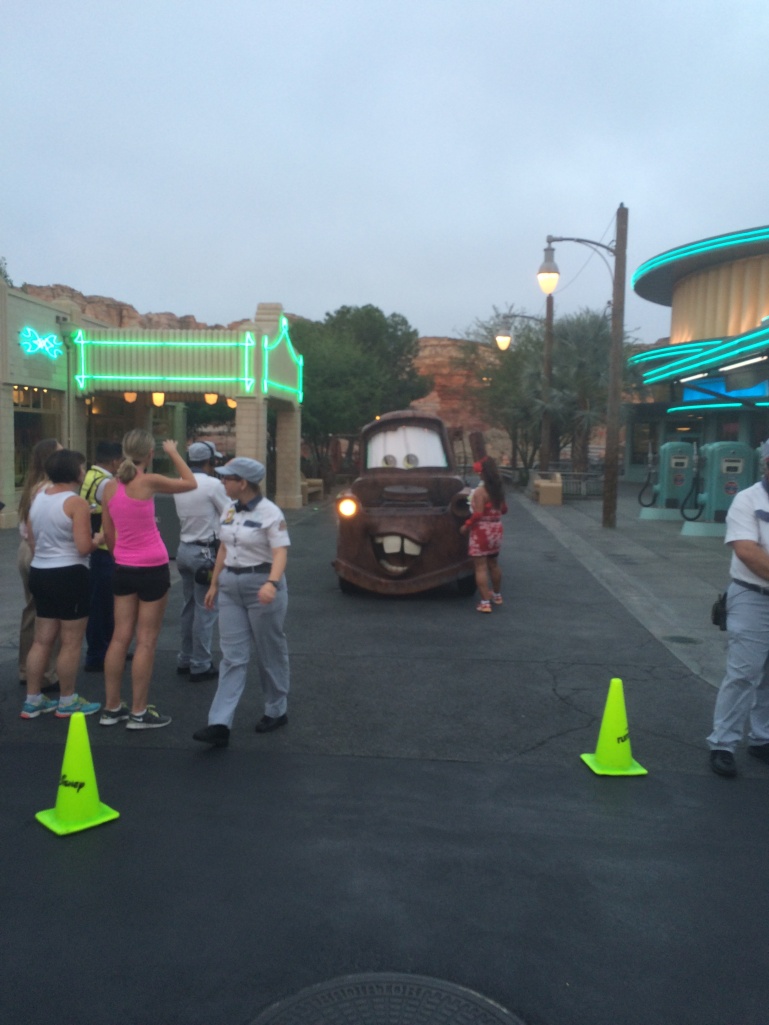 In previous races, they’ve had Mater here by himself or with Lightning McQueen. 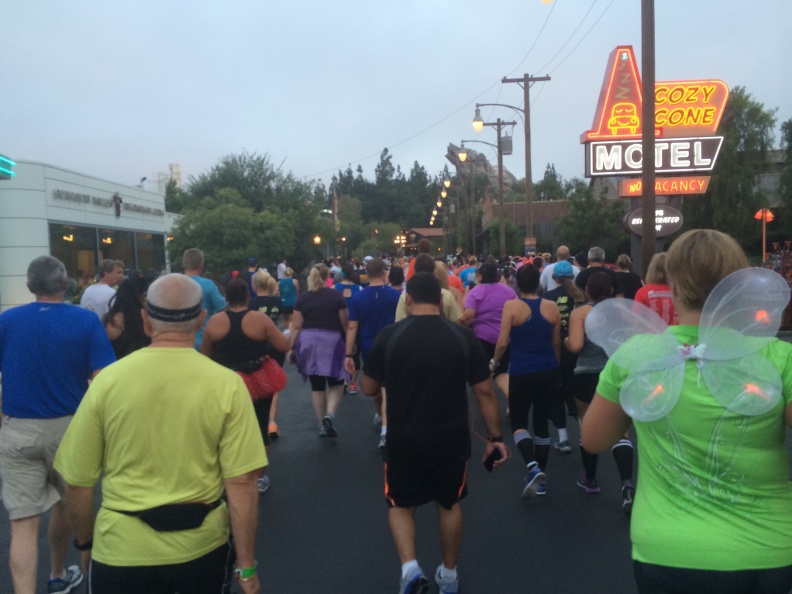 Then the course heads up Route 66. Somewhere around here will be the mile 1 marker according to the map. Also, note, that the first real restroom is on your left side just past Flo’s V-8 Cafe.

This is the view from the opposite direction for where the first real restrooms are located.

You’ll most likely make your way towards Paradise Pier.

This might be a good spot for a photo…

Unlike the Disneyland 10K route, the Avengers Half Marathon route will not go onto Paradise Pier. It will continue up towards The Little Mermaid: Ariel’s Undersea Adventure.

You’ll make your way towards the Condor Flats area passing by Soarin’ Over California. This will lead to a quick backstage area to take you out of Disney California Adventure here.

From there, you’ll head towards the esplanade. 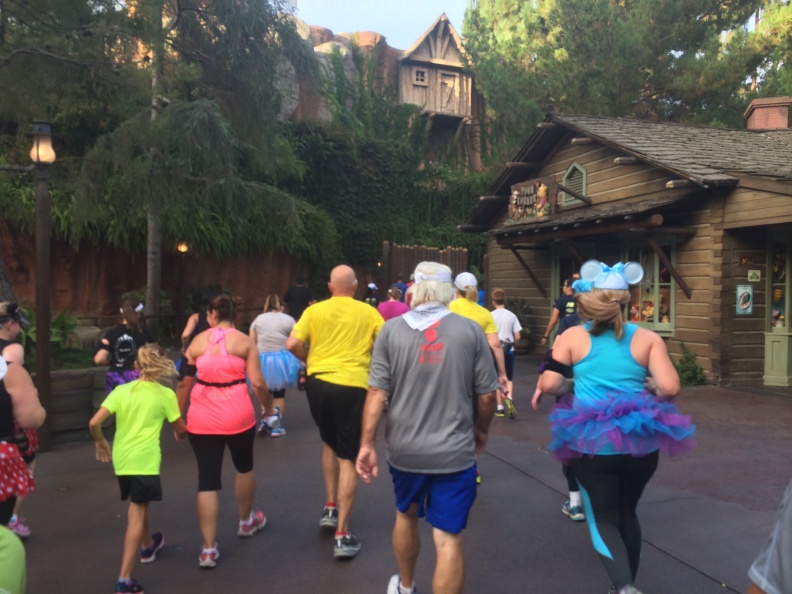 The course will head all the way towards Critter Country. I believe that we’ll enter Disneyland On-Stage at this point pictured above. Again, this is from the Disneyland 10K where we went the opposite direction. There is a narrow path to get through this point. It is likely that there will be a voice warning you of this. So, beware that the course will narrow. 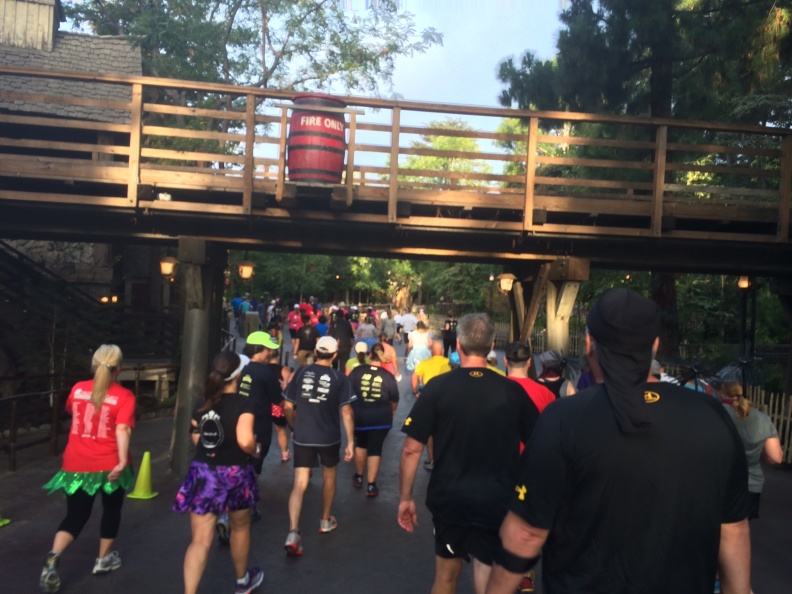 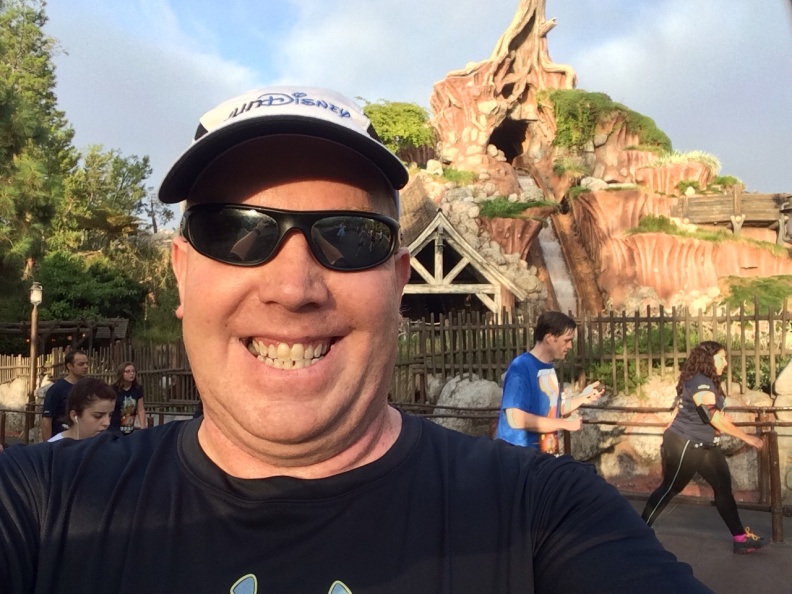 Run by the Haunted Mansion along the Rivers of America. The Nightmare Before Christmas overlay will be on for this attraction when the Avengers Super Heroes Half Marathon is run. So, you might want to consider taking a picture. They dress up the Haunted Mansion really cool for that overlay. Just saying. While you’re running along the Rivers of America, there will be rolling inclines and declines. I don’t really want to call them hills because they’re more like bumps.

The course could go this way around King Arthur’s Carousel or it could go the opposite side.

Either way, it leads to running through Sleeping Beauty’s Castle.

There will be someone taking pictures as you come through Sleeping Beauty’s Castle. If not, get a selfie like I did!

Unlike the Disneyland Half Marathon, once you come through Sleeping Beauty’s Castle, you’ll continue down Main Street U.S.A. Again, you’ll be running the opposite direction as this picture. 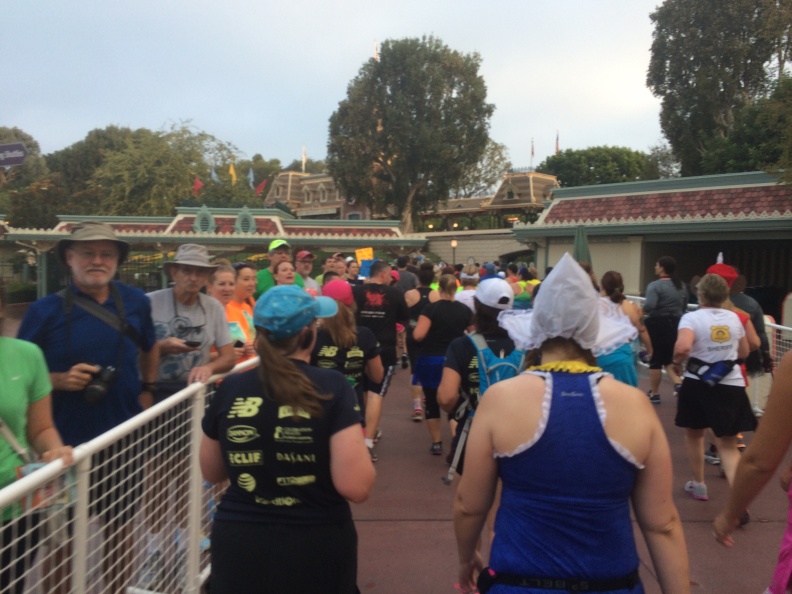 This part I’m a bit unsure about. I think we’ll continue out the exit (again the opposite direction as the runners are heading above).

Then, we’ll head along this backstage area… If that is the case, then this will be our exit point before we head onto Harbor Blvd. Come back tomorrow, when I’ll have details that involve much less speculation. The part where we run the streets of Anaheim are much more clearly defined on the map runDisney gave us…

See what I mean? Anyways, this post represents my best guess as to how our time in the theme parks will work out. I have no problem being wrong about this. My 12.5 mile long run covers most of the streets of Anaheim part of the race course. So, they will probably be more helpful. As you will see in the upcoming posts, the race route away from the Disneyland Resort for the Avengers Super Heroes Half Marathon is much nicer than we got with the Disneyland Half Marathon. So, come back for part 2 tomorrow and part 3 on Thursday.