Dumbo Double Dare Week has come and gone. I’m officially a Dumbo Double Dare Finisher and I have the bling to prove it! This weekend was a completely magical weekend that only Disney can give! I don’t have the time to give a proper weekly recap. However, I wanted to get something up for those of you who have been following along. So, here’s the brief rundown….

Monday was a typical rest day.

On Tuesday, I got up with the chickens for another three mile run around Pasadena to get ready for the races. It was a much better run than the previous Tuesday. Maybe these early morning runs will work out after all. This turned into my last training run before the Dumbo Double Dare. The weird thing about this run is that I felt completely miserable before going out. I was convinced when the alarm went off that I would skip it. However, 20 minutes later, I felt alright enough to go out and try. So glad I did. I felt great while running this past Tuesday.

Wednesday, I really wanted to get up and run because that would allow me to sleep in on my birthday. However, I didn’t sleep very well and could not get out of bed. So, it was a skipped run. My race weeks never seem to work out the way I want them to. 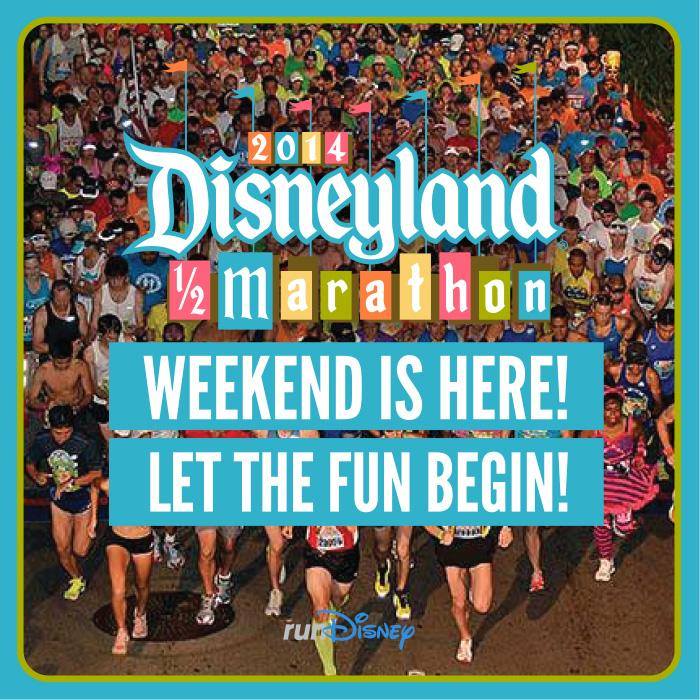 Thursday was my Birthday and the first day of the Disneyland Half Marathon Expo! What an amazing day! I covered all the details in Friday’s blog post, here.

On Friday, it was a day to get packed up and head to the Disneyland Hotel to check in! Here’s the view from our room in the Adventure Tower.

Here’s the bed in the room! Amazing! Right? The head board has LED lights to make the fireworks happen. When you turn it on, the head board plays “A Dream is a Wish Your Heart Makes” while the fireworks twinkle. I’ll give you the tour of the room at the Disneyland Hotel in another post. I loved this room! Everything about it was classic Disney! The day didn’t go completely to plan, but we got in! The traffic getting off the freeway was insane. It took Brooke and I a half hour to get from the exit on the 5 freeway at Disneyland Way to the Disneyland Hotel parking lot. I could have run the distance quicker (and I’m a slow runner). We got in to the room around 9pm and frantically got ready for bed. After all, the Disneyland 10K was the next day.

Saturday I ran in the Disneyland 10K (part 1 to the Dumbo Double Dare)! I’ll cover this race in greater detail either tomorrow or Wednesday. However, here are a few pics to give you a sneak peek…

In the starting corrals with 10,000 of my closest friends. 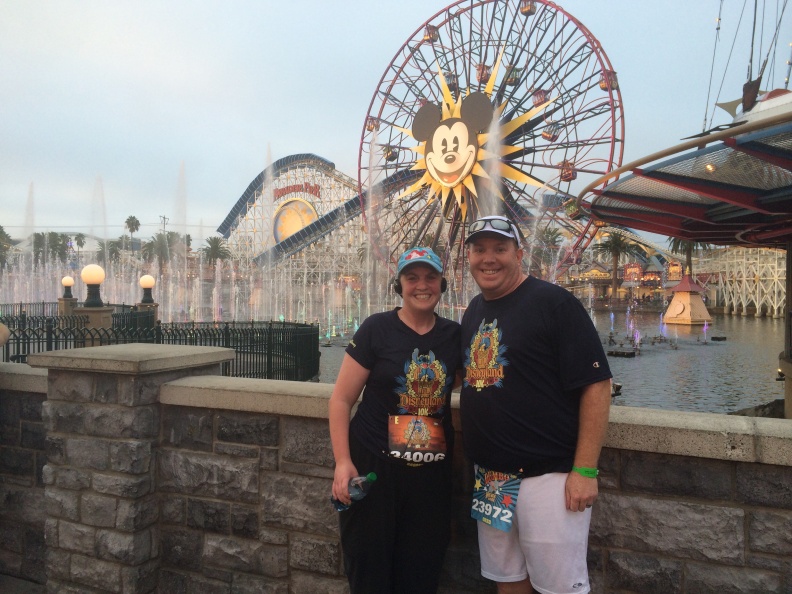 With the World of Color fountains… 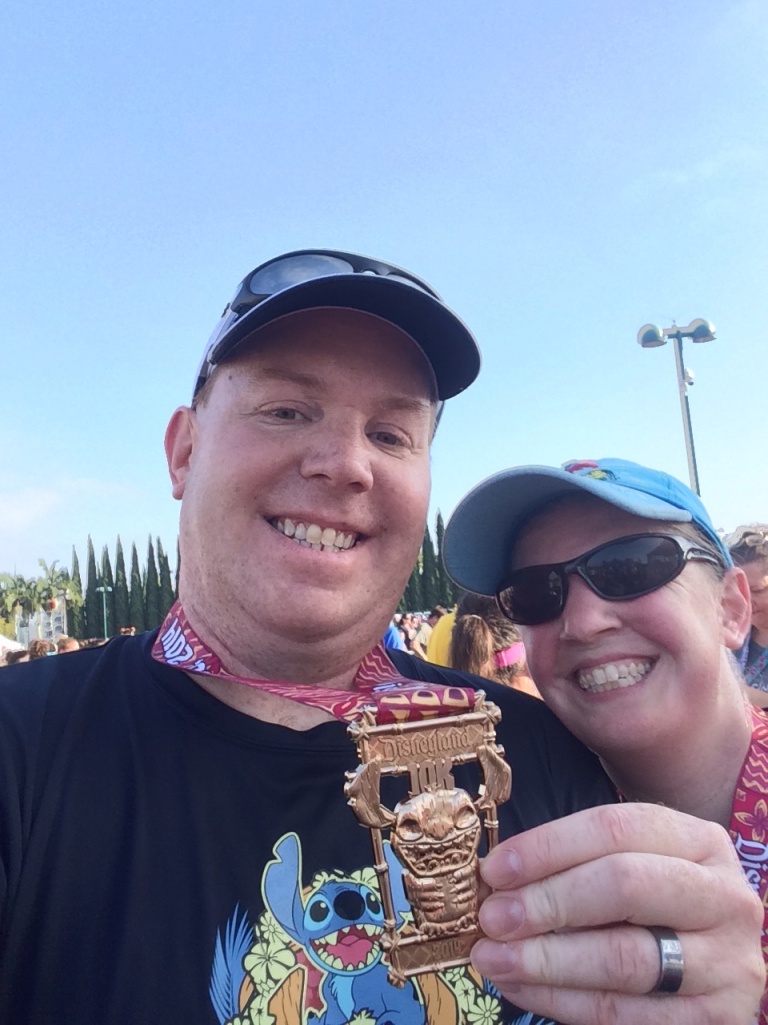 The fun didn’t stop with the Disneyland 10K, my parents came out for birthday lunch at the Rain Forrest Cafe. After the parents left, we had dinner with my PR Professor from Belmont University and her family who were out for the races. One really cool thing that happened with the lunch is that we ended up in this private booth with views of all the college football games going on. It was totally unplanned and worked out fantastically. Both lunch with my parents and my former professor were amazing! We had amazing food, amazing ambiance at both the Rain Forrest Cafe and the ESPN Zone, and great conversation! To follow all that up, our friends Josh and Wendy came to see us at the Disneyland Hotel with their son Eli. So, while Brooke and I didn’t hit up the theme parks on Saturday, we had a great day!

Sunday, I ran the Disneyland Half Marathon and finished the Dumbo Double Dare! After a meet up for the Team #runDisney facebook group I’m a member of, we headed to the waiting area. While waiting, I saw a group of people taking a picture together and found out that they were part of a group called Run 3rd that Sean Astin is part of. Well, after the picture, I saw Rudy himself walk up. He ended up helping my friend stretch and I grabbed this quick picture with him. Pretty cool way to start the day!

Remember how I said that my former professor was out for the races with her family? Well, it turns out that her and her brother were in my corral! So, we hung out in the corrals. 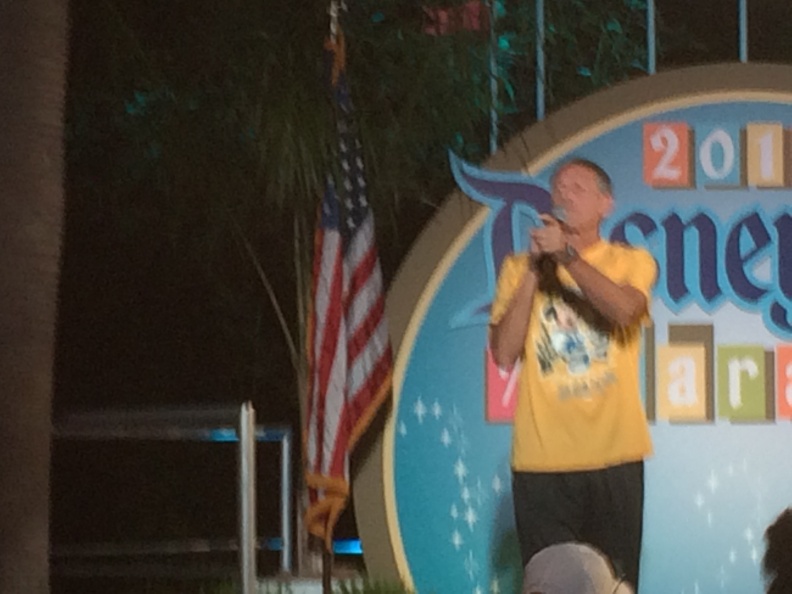 Before we knew it, Rudy was sending us off!

We ran through Cars Land…

Found our way to Disneyland… 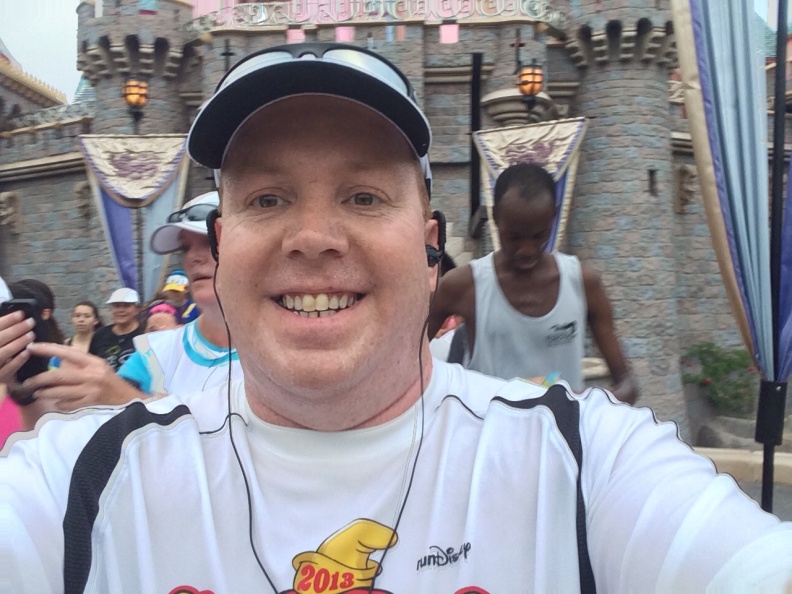 I got to run through Sleeping Beauty’s Castle again! 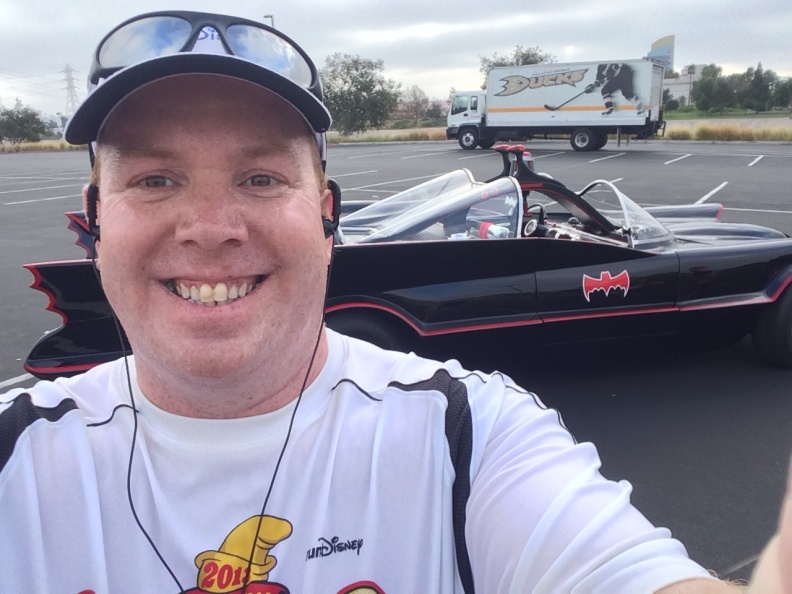 At the Honda Center parking lot, I saw the Batmobile!

And another Lightning McQueen!

We ran through Angel Stadium! Look at the amazing crowd! 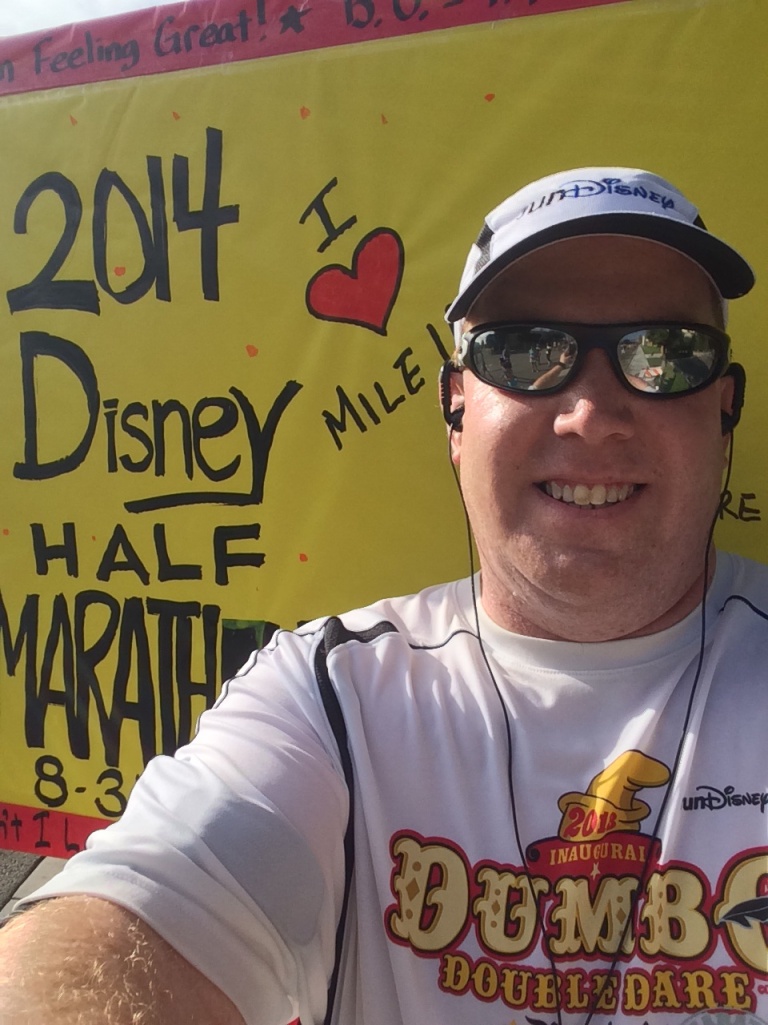 My Disneyland Half Marathon Selfie!

At the end of the race, I had 3 new medals…The Coast to Coast medal, the Disneyland Half Marathon medal, and the Dumbo Double Dare medal! 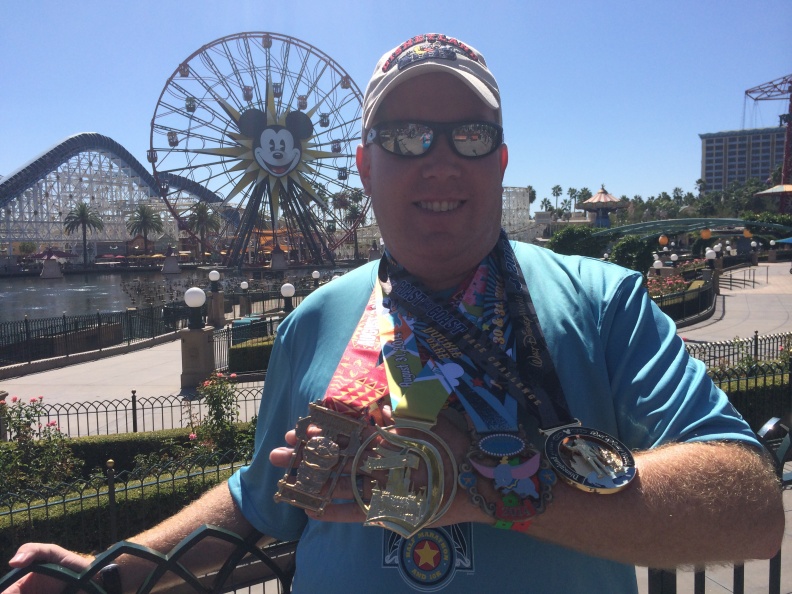 Because everyone gets a picture with their medals for their race weeks at Sleeping Beauty’s Castle, I got mine with Mickey’s Fun Wheel in the background. 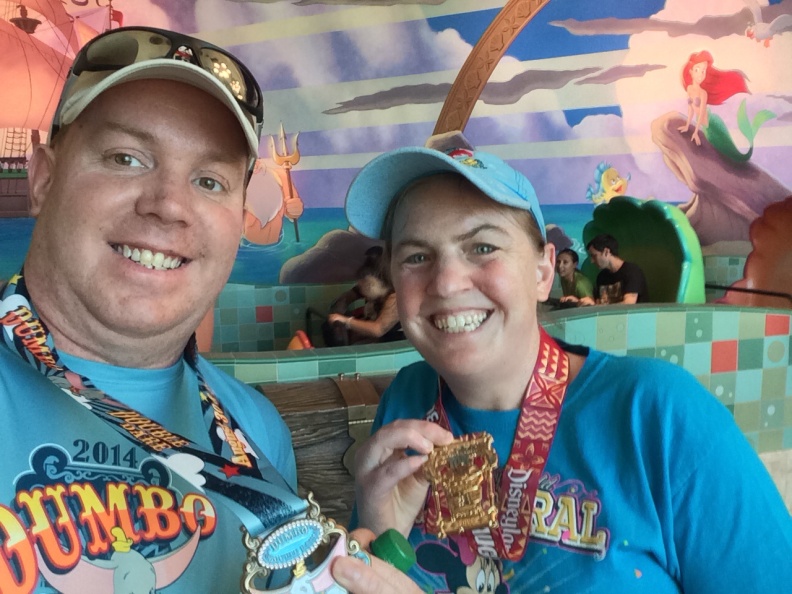 Around the parks, I only wore the Dumbo Double Dare medal. Brooke and I took our medals to show Ariel!

We saw Jessica (my PR professor) and her family in DCA!

About a minute or two later, we ran into Jeff Galloway in DCA!

I then took the medals to Disneyland! 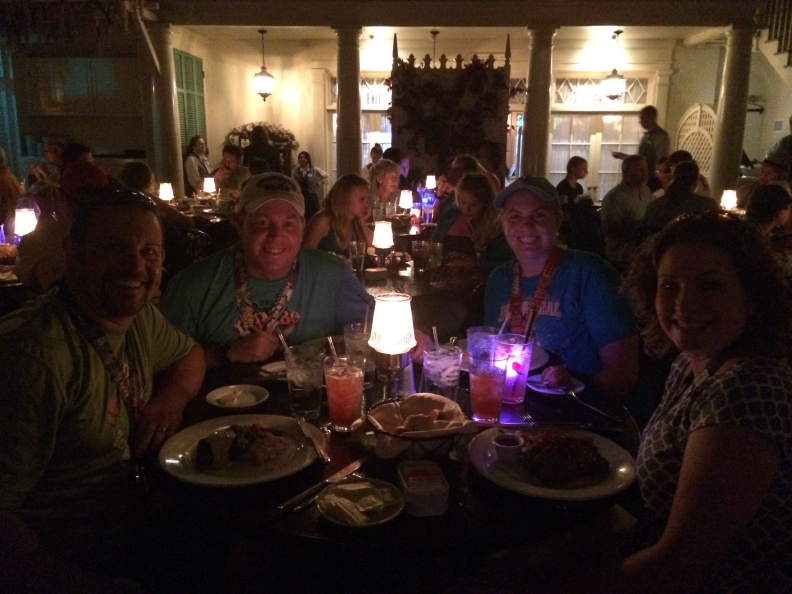 We had dinner at the Blue Bayou with our new friends David and Jennifer. David writes the Doombuggy Runner. If you haven’t read his blog yet, you should. He’s another Disney fan who loves running! He’s on a quest to run half marathons in all 50 states. We had a blast hanging out with both David and Jennifer!

We ended the night with fireworks…

and Fantasmic! It was a fantastic finish to a magical day! I’ll cover the details of this weekend in greater depth throughout this week. I just wanted to get something up since it is Monday. It was a good week overall! I’m so glad to say that I’m a Dumbo Double Dare finisher officially! It felt great to get that medal!

The next race I’ll be training for is the Avengers Super Heroes Half Marathon at Disneyland in November! In between then and now, I’ll be running the Long Beach Half Marathon to finish out the Beach Cities Challenge. Even thought I’m reveling in the accomplishment of 19.3 miles over two days, I’m still pretty stoked about getting to earn this medal in November! To all of you who ran the races at Disneyland this weekend, I hope they went well and that you all had as wonderful of a weekend as I did.