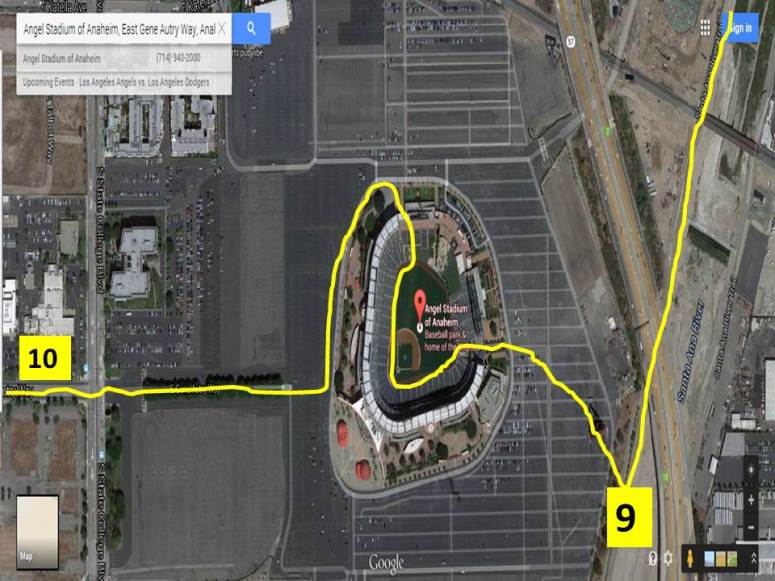 Welcome to Angel Stadium and my favorite part of the course. It’s also the start of mile 10. 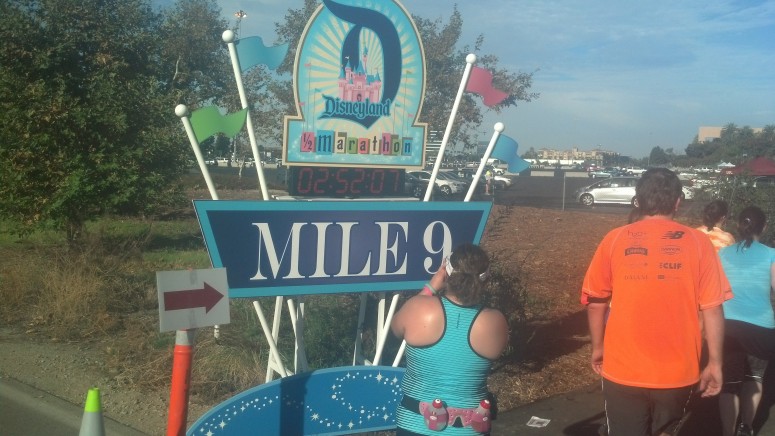 We concluded yesterday’s coverage at the mile 9 marker. This is where you come off the river trail and head into the parking lot at Angel Stadium.

You start off running under the Big A. Shortly after, you can see the Cliff Bar arch. So, that means, this is where the Gu is. The crowds at Angel Stadium are truly amazing and loud. There are lots of people cheering you on even in the parking lot! The 10th mile of this course is my favorite and it will get your adrenaline going big time.

The route heads towards the stadium where you’ll enter here. There is a small downhill ramp to get you to the field. Enjoy the brief shade as you run under the stands to get on the right field warning track. 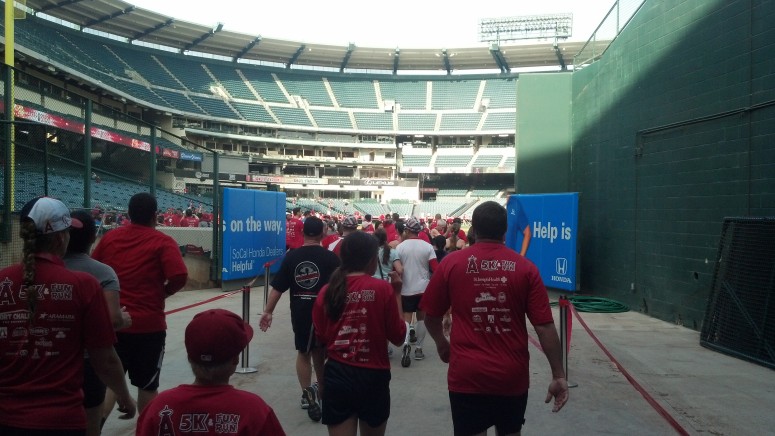 This picture is from the Angels Baseball Foundation 5K this year. However, this is what you’ll see when you enter the stadium The only difference is that there are a lot of people cheering you on in the stands. If you’ve ever wanted to feel like a big time athlete, this part of the course will fulfill that dream. If you’re not running this race for time, I suggest taking your time getting around the stadium. Take it all in. 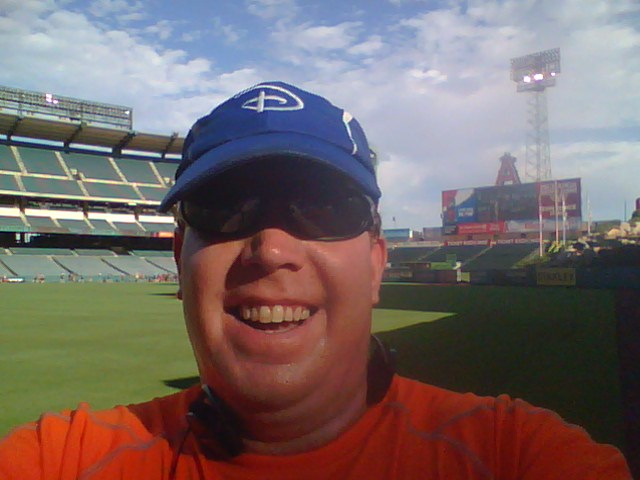 Take your picture from the field.

See all those people who came out to cheer you on? Enjoy this moment!

Stop for a picture by the visitors dugout…

Take a selfie behind home plate… 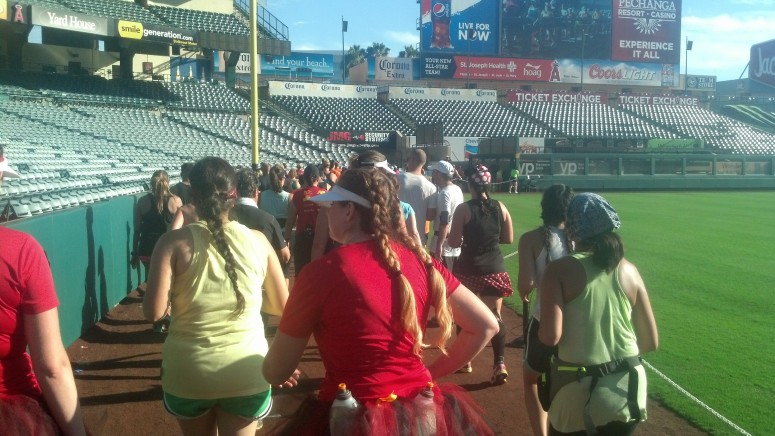 As you make your way up the left field side, look for the camera. You’re going to be on the jumbo tron! 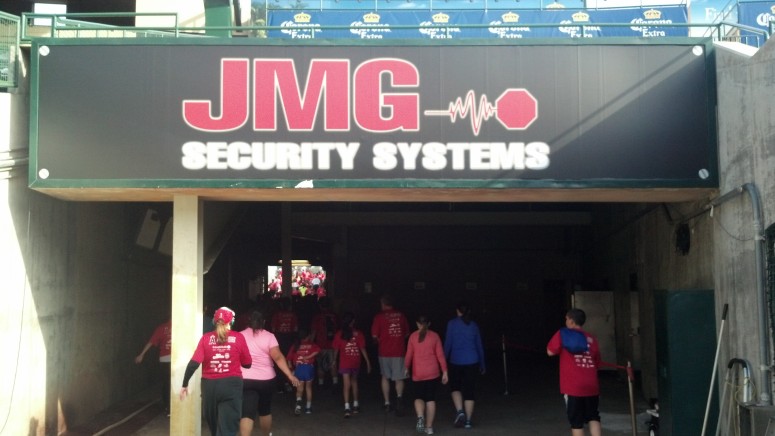 As you continue in the parking lot, you’ll make your way out of the stadium on Gene Autry Way. Right before leaving the stadium is a water stop. Last year, I was so overheated that I took three cups of water. Keep hydrated. By the point your cross State College Blvd., you’re almost to the 10 mile marker. Only a 5K to go! 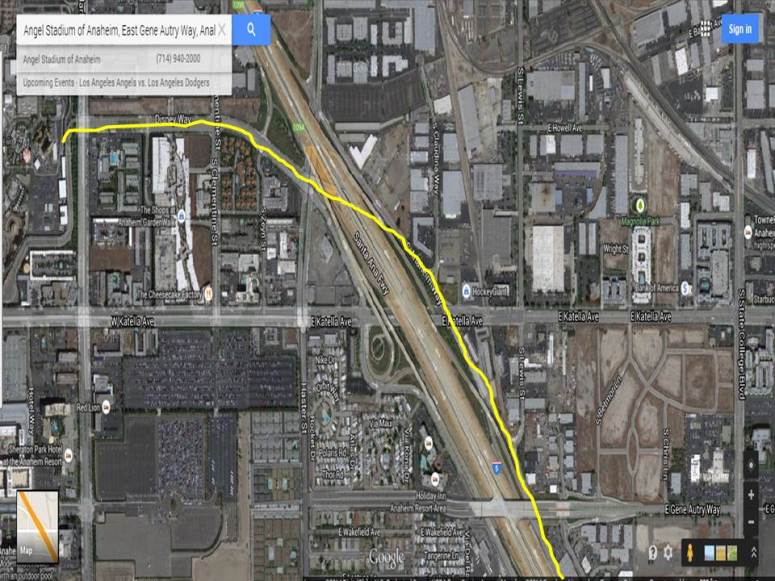 The route continues along Disney Way all the way to Disney California Adventure. By this point, you might start seeing the Disneyland Resort in the distance. To be honest, this was the hardest part of the course for me. It was hot out and I just wanted to finish. Although…

As you see in the slide, you do get to run under the freeway in this part. The shade was heavenly! There was also another cheer squad as you entered.

Running towards the resort is a combination of excitement and torture. I mean, it’s so close to the end, but not quite yet. Disney Way takes you back into the back stage area of Disney California Adventure. This the same spot you came into the backstage DCA in the second mile. This time, you won’t go into the park.

Yep, the end of Mile 12 feels amazing! You will follow the path into backstage DCA. The road is pretty wide open and flat. If you have energy left, there’s nothing to wait for. At the end of the backstage DCA, you’ll cross the roads you started the whole half marathon over to get to the parking lot for Disney’s Paradise Pier. From the parking lot until the finish, there are lots of people out and cheering you on. You’ll follow a path around Paradise Pier’s back side into Downtown Disney. Keep in mind, however, that the roads will narrow once you get into Downtown Disney. 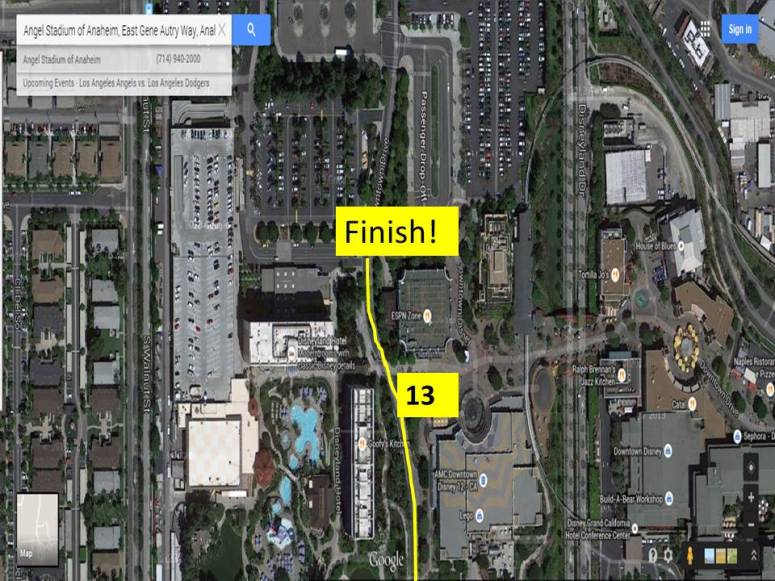 The 13 mile marker will be hard to see in the sea of people.

Celebration time! As you finish, there will be some Disney characters close to the finish line. Once I saw Mickey Mouse, last year, I couldn’t help myself. I had to get that high-five! I’m additionally stoked, that the Marathon Photo guys caught the moment on film! Once I got to the Downtown Disney part of the course, I felt a surge of energy that pushed me across the finish line. Once I saw the 13 mile marker, I was off and decided I needed to run the entire way. 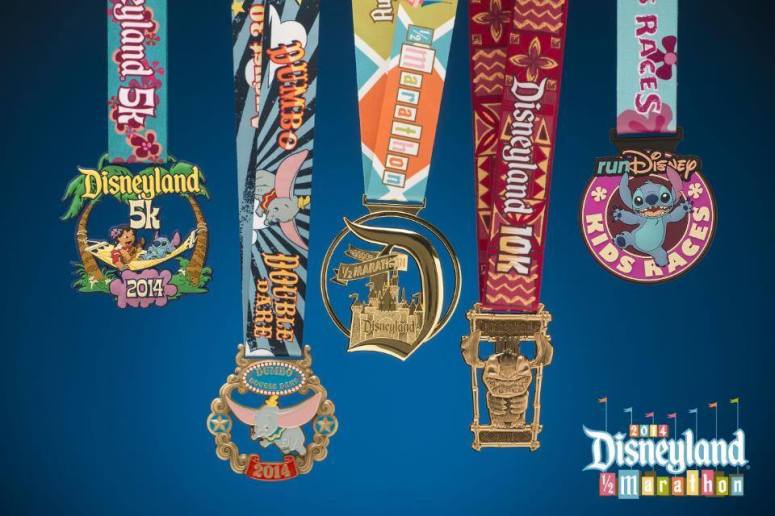 If you get too tired out there, remember at the end your bling awaits! I hope you’ve enjoyed this look at the Disneyland Half Marathon Course. It has been my desire to pass along words of wisdom to help. The Disneyland Half Marathon doesn’t have as many character stops as the Walt Disney World Half Marathon. However, it’s still a very cool race (although expect high temps). If you’ve run through Champion Stadium at a runDisney race in Walt Disney World, it’s nothing compared with running through Angel Stadium. So, for those reading this who are running, I hope you enjoy the experience. I also hope the weather isn’t too hot.

If you like this post, check out the rest of the posts on the Disneyland Half Marathon Course

Taking to the Streets of Anaheim