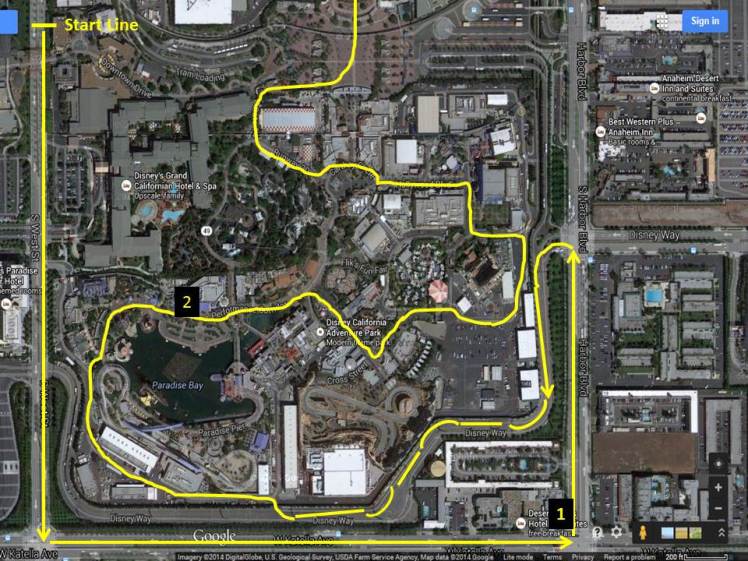 Since I didn’t finish the scheduled 12.5 mile dress rehearsal at Disneyland on Sunday, this will be a little different from I had planned. Today will be the first installment where we’ll start the Disneyland Half Marathon and make our way through Disney California Adventure. 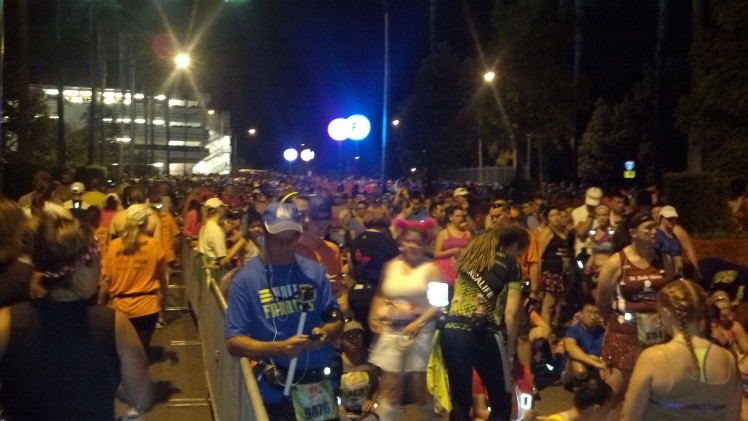 Ever Disney race starts off with getting to your corral. For purposes of this series of blog posts, I’ll assume you’ve made it to your corral. We all know this is where the excitement builds…and so do the nerves. 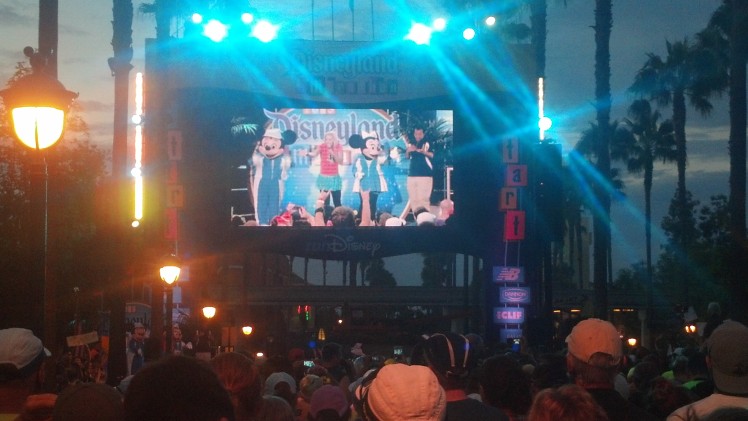 When you get here, your start is coming up. Try to keep the nerves at bay and not go out too fast. 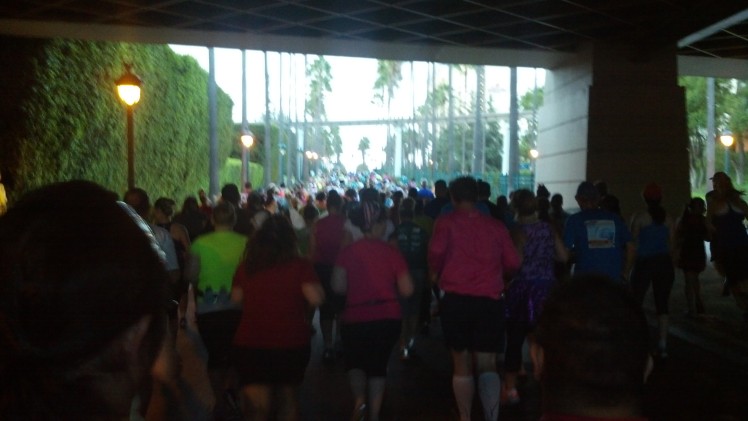 And we’re off. The Disneyland Half Marathon begins on a slight downhill as you go under this…

Yes, there will be people cheering you on from this part of Downtown Disney. You go down under this walk way and back up it on the other side. Even though there is a decline and incline, it’s super easy. After all, it’s in the first tenth of a mile and you’ve got all the energy in the world. This part of the course is a little crowded. Don’t worry, it won’t be long before you’re on pretty open roads and able to get to your pre-race plan.

This is what the start looks like in the daylight and without all the extra fun stuff. 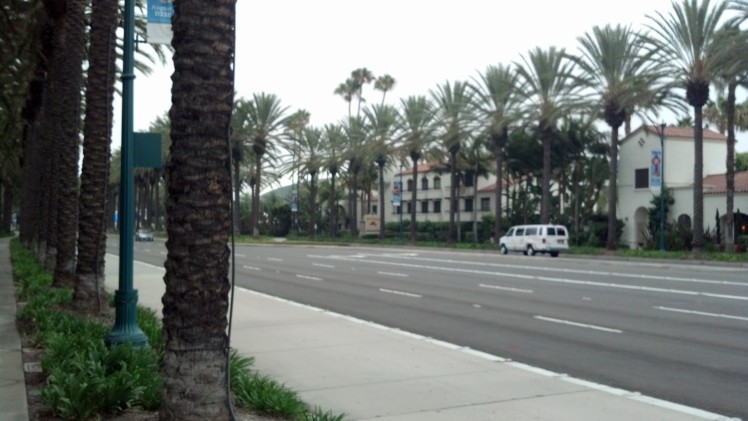 This is the first turn up Katella Avenue. The roads are open here. To maximize your time, stay to the left side because all the turns until you get into Disney California Adventure.

A little further up Katella is the Anaheim Convention Center to your right. 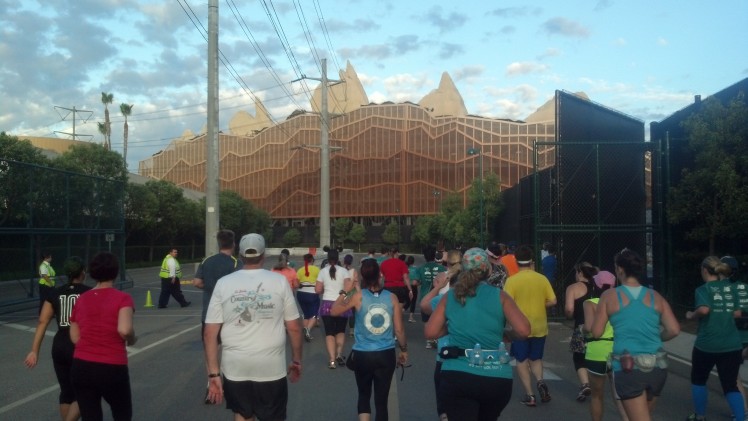 This is the spot of the race course where you’ll come to a second time…the end of Mile 12 and start of Mile 13. Both times you come here, you’ll probably be excited for entirely different reasons. When you come through in Mile 2, you’ll be excited for finally getting into a theme park. This first stretch takes you backstage at Disney California Adventure. The road is rather open and wide. So, you should be fine maintaining whatever pace you desire. There will be a fair share of walkers in this section. However, you should be fine keeping your pace in the backstage area. This is the gate where you will enter the “on stage” part of Disney California Adventure. On race day, this gate will be wide open.

Here is what your view will be as you enter the first of two theme parks. The course should be open enough for you to continue with your regular pace. However, be careful. As you wind your way around DCA, there will be points that narrow.

A little further up the same area you’ll see… Goofy’s Sky School on the left… You’ll round the corner and are almost to the Mile 2 marker! The California Zephyr will be on your right.

You should see the Mile 2 marker on your left side right around here. So, if you want your picture with the sign, move to the left. People will also want to make it to their right about this point as there are some good places for pictures with Mickey’s Fun Wheel and the Paradise Bay here. So, the course will get really crowded with all the people stopping for pictures. Be prepared for this so it doesn’t mess with your mind.

As you keep moving up, you’ll pass by the entrance to Ariel’s Undersea Adventure. 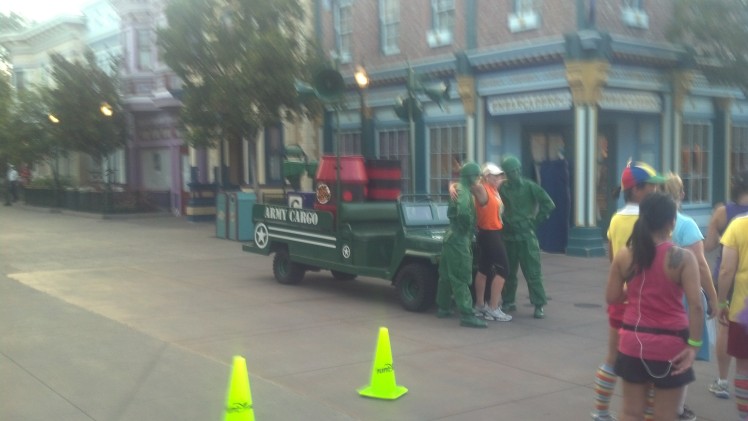 Just past the Ariel’s Undersea Adventure, on your Left was the first character photo opportunity from the 2013 Disneyland Half Marathon. It was with the Green Army Guys from Toy Story. If I wanted a photo with Mickey’s Fun Wheel in the background, I’d take it here. It’s really close to the Green Army Guys on your Right side. If you’re not getting a photo, be careful. Due to the couple of photo ops, there will be some crowding. So, plan on this being where the race course will be a little slow and go.

From there, the course turns slightly left as you head off towards Cars Land. This part wasn’t too bad as far as crowding goes. Around the corner, you’ll go straight for a small stretch….

Then, the course will turn right as you run up Route 66 (AKA Cars Land)! This is a real highlight. While it’s fun to run this part of the course, the route is a little narrow and lots of your fellow runners will stop. It’s a pretty great spot for pictures. Lots of people will stop. So, watch out for them. Also, I found this area to have a lot of people walking 4 or 5 people across. It really frustrated me. Don’t let it do that to you.

If you want a restroom stop in a real restroom, look for Tow Mater’s Junkyard Jamboree on your left side.

Directly across from Mater’s, you’ll see this sign on your right side.

The restrooms are hidden back here. This is what the area looks like. I didn’t stop here. So, I have no idea how bad the lines are. However, this is the first real restroom located right off the race course.

Just past Mater’s and the restroom, you’ll come to the Cozy Cones Motel on your left. Lightning McQueen will not be there during the race.

At the end of Route 66 is Flo’s V-8 Café. Here is where they will most likely have a picture spot with Lightning McQueen and Mater.

This is also where the course turns towards It’s A Bug’s Land. You’ll notice Luigi’s on the right side.

Continuing on, you’ll notice Luigi’s Flying Tires on the right side… Note, the signs heading in the way that the Disneyland Half Marathon course runs will be all about It’s A Bug Land. If you look back, you’ll notice the signs are about Radiator Springs because you’re heading to Cars Land. If you’re running the Disneyland 10K, you’ll be running the opposite way on this path. So, the Radiator Springs signs will face you. I note the signs because the can make for some fun picture spots.

Do you see the red fire truck on the left? Well, there will likely be either the same fire truck or another Cars character in that spot for both the Half Marathon and 10K.

The road leads off stage. If you’re running the Disneyland 10K, this is where you come on stage in DCA for the first time. Note that this path from Cars Land to here is pretty narrow and will likely be slow and go for you.

When you go back stage, you’ll notice the Twilight Zone Tower of Terror to your left. When I ran through this course in 2013, I couldn’t help but think how awesome of a spot it would be to have a photographer to get the birds eye view of the runners. Anyways, the course runs back stage around the Tower of Terror. This part of the course is still rather narrow.

You come back on stage through this gate on the other side of the Twilight Zone Tower of Terror. The course will make it’s way towards the Hollywood Land.

Around the corner and you get to see this view! Be careful of the Red Car Trolley tracks in the middle of the road.

Before you get to the Mad T Party sign, the route will turn to the left. Last year, they had the Monster’s University float from the Pixar Play Parade along with Sulley and Mike Wisowski here for photos. Of course, last Summer, Monster’s University was the summer film for Pixar. So, they might not be here again. However, you might want to pay attention to see who will be there this year as it’s a good spot for a character.

From there, you turn up Hollywood Blvd.

This is where the next restroom spot is on the race course.

You continue up Hollywood Blvd to the entrance of Hollywood Land. Right past the entrance on your Left side is the Carthay Circle Restaurant. You’ll also pass by the Storyteller’s Statue which is another great spot for a picture along the course. This spot is pretty narrow for the race. 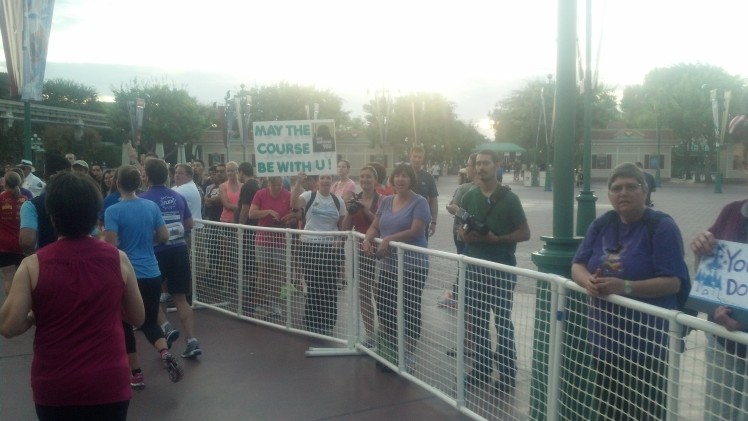 As you run on the Esplanade towards Disneyland, there will be a good size crowd to cheer you on. I loved this part of the course because it had an audience. This is where we’ll leave off for today. Sorry that this post covered less than a full mile. However, there is so much to cover in the theme parks that I wanted to go into a little more detail with that part of the race course.

If you like this post, check out the rest of the posts on the Disneyland Half Marathon Course

Taking to the Streets of Anaheim

Angel Stadium to the Finish