The good training run I shared on Friday was part of a fantastic week in training leading into OC Half Marathon Race Week!

While I’m excited about another race week, I’ve been a little nervous about this upcoming half marathon. If you’ve been following along, you know that training since the Hollywood Half Marathon has not been great. I took the entire week after the Hollywood Half Marathon off from working out. Then, followed that with two 3 mile training runs that ended with fighting off pain in my lower back. So, this past week, I was more than a little concerned that my growing missed workouts were catching up with me in such a way that it would be unwise to attempt running a half marathon on May 4th. Well, this week eased those worries.

The first run was a lot like the runs the week before. I ran fine for the first 2 miles. Then, during the last quarter-mile, I had to deal with the same back pains as the week before. So, there were 3 consecutive training runs where I was barely surviving 3 miles. Cause for concern? Absolutely. The finishing time was rather slow at 37:28. I lost a lot of time in that last quarter-mile. On top of that, I already had a bunch of red lights that further slowed me down. So, it was not the best training run. However, I knew I needed to get out and put in the miles. After all, that May 4th half marathon was looming. I trusted that putting in the miles would eventually lead to better results. 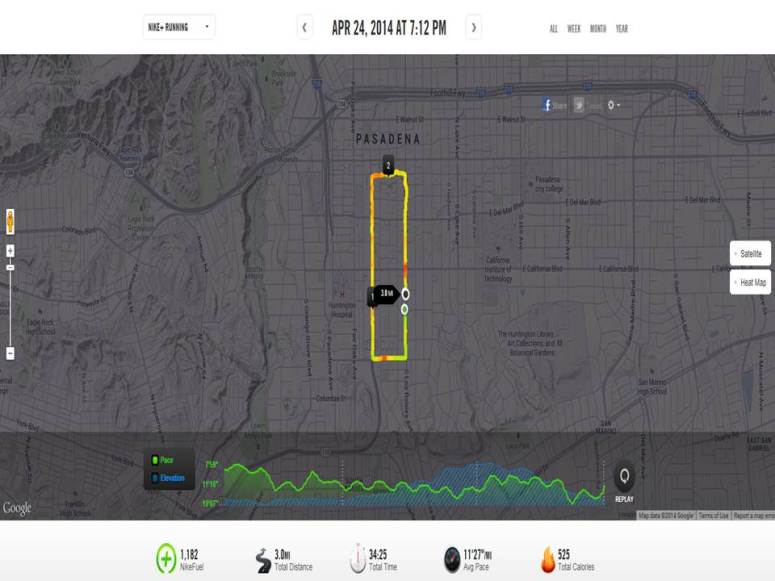 By Thursday, those results finally paid off! I took a little more than 3 minutes off the time I had from Tuesday! The best part was that I didn’t have the same back pain issues right up until I crossed the 3 mile mark. As soon as I finished, that back pain came to me immediately. It was almost as if my back was saying…”Okay, I’ll give you 3 miles, but no more.” Since I finished with an average pace of under 12 minutes per mile for the first time in (what felt like) forever, I was thrilled! You can read about this run here.

Since I had struggled with my previous 4 training runs and with the OC Half Marathon a week away, I really wanted a 10 mile run. The original plan was to head out to the Rose Bowl and run the Rose Bowl loop a few times, ending at 10 miles. However, when I drove to the Rose Bowl, I found that there was an event. Urgh! This has happened before. Like that time (when I also wanted to finish 10 miles), I came home determined to get my miles in. On March 15th, I only got 6.2 miles in. Here’s what that looked like.

This was my first attempt with this route and it proved to be difficult. I blogged about that experience here. I later attempted this route on March 27th (only I was aiming at 6 miles) and took nearly 4 minutes off that time. Like March 15th, the sun was out and shining brightly. Unlike March 15th, there was a strong, cool wind blowing to keep me feeling cooler. Since this was my third attempt over this route, I knew that the 3rd and 4th miles would be rough. I also knew that if I made it past the 6.2 miles I stopped at on March 15th, the 8th mile would be tough as well. So, when I set out on this route, I purposefully took the first couple miles a little slower than I had previously. As you can see from the images of the route, the first few miles are largely downhill. So, it would be easy to push the tempo. I wanted this to be a successful outing and finishing ALL 10 miles was the focus for me. It turned out to be a great strategy. When I crossed the end of 3 miles and had no pain, there was a huge feeling of relief! When I crossed the end of 6 miles and still had no pain, I was feeling amazing! I’m not gonna lie. I knew the 8th mile would be hard. After all, it is the 2nd mile of my 3 mile training loop and it’s largely uphill. To top this off, I had this concern in the back of my mind that maybe the 3 mile loop I was using contributed to the back pain. Now I was on that path. So, would the pain return in the same part of this path as previously? Nope! While the 8th mile was my slowest, I finished pain-free and finished the 9th mile almost 3 minutes faster than the 8th mile! By the end of that 9th mile, I was done mentally. By 9.5 miles, I pretty much quit on the run and was satisfied with merely finishing. I did still throw in some run intervals in the 10th mile. However, they weren’t the 1 minute ones I was doing previously. What can I say? I just ran out of the mental strength at 9.5 miles. That’s okay for now.

At the end of the day, I finished 10 miles! To top it off, I was pain-free! After four, 3 mile training runs that ended in pain, I felt pretty good in being able to finish 10 miles without pain.

Running is not the end of the story with this week’s training. I followed up my 10 mile training run with a visit to LA Fitness for the first time in more than a month! The 3.76 miles represented on the graph was my distance on the elliptical machine. While skipping training runs has contributed to my lack of conditioning, skipping gym workouts has also played a big role in that. Being in the gym again felt really good! Why is it that I’ve developed this negative view of going to the gym? Every time I go, I’m glad I did. Sunday was no different. It was a good, solid workout that exceeded my expectations going into it. After all, with a month in between gym workouts, I was using this workout to test and see where I was at. Although this is not workout related, we had these guys visit us at the Disney Studios on Friday at lunchtime. If you look at R2-D2, you’ll notice that he has a guest badge on. After all, he doesn’t work at the studio. These guys were on the studio to promote the unofficial Star Wars Day (May 4th). On that day, I’ll be running my 6th half marathon! 2014 OC Half Marathon, I’m comin’ at ya! May the Forth be With You All!

9 thoughts on “Awesome Week Before the OC Half Marathon Race Week!”