Yesterday’s blog ended at EPCOT waiting for our bus to Disney’s Art of Animation Resort. When Brooke and I first discussed going to Walt Disney World, this is the resort we most wanted to stay at because they had a Little Mermaid wing (and Brooke is a huge fan of everything Ariel). We were both disappointed to learn that I didn’t get my cast member discount on the rooms in the Little Mermaid wing. I only received a discount on the other wings if this resort. The Little Mermaid wing is the only wing of the resort that has regular rooms. The others (Lion King, Finding Nemo, and Cars) are suites. Since the main interest in staying there for Brooke was to be in The Little Mermaid wing, we decided to go another way. However, Brooke asked if we could take a visit to this resort even if we weren’t staying there. I said we could. Originally, I had planned on visiting after the Expo. However, with the long wait for the runDisney New Balance shoes, the plan changed and we decided to go here after the spa.

We were pretty lucky with the timing of our arrival at the bus stop at EPCOT. There was a bus that had just arrived for the Art of Animation Resort. Since we were hungry for lunch, this was awesome.

The entrance to this resort is very impressive. The larger than life panels represented the 4 themed wings of this resort.

As exciting as this was, we were hungry. So, we headed for the Landscape of Flavors food court. 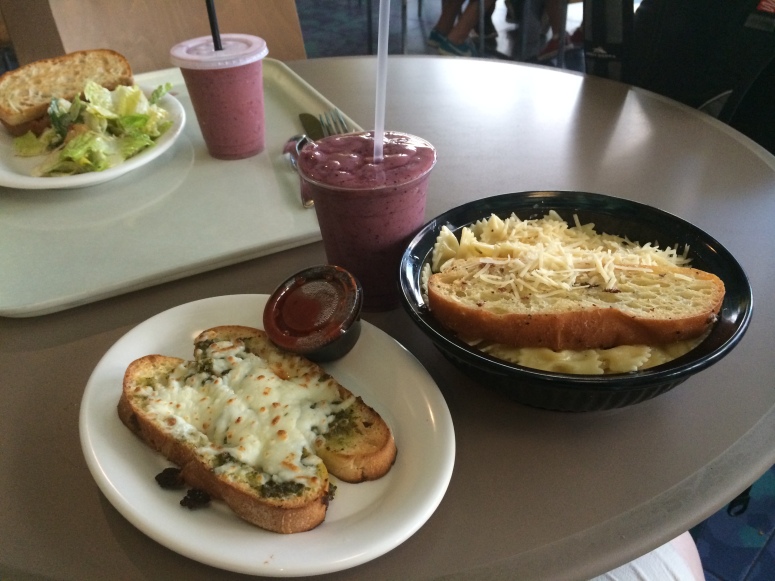 For a value resort, the food offered is really great. Brooke made her own pasta and I ate the meatball sandwich. We also took advantage of the create your own smoothie option.

We also indulged a little with desert. Although, to be fair, we didn’t actually eat the Little Mermaid rice crispy treat until after the marathon.

The interior of the dining room was off the hook in its awesomeness! We ate under this. Yep. We ate in Ariel’s Grotto.

I forget what the technical term is for the art that was displayed throughout the dining area. It’s the background without the characters. There were 4 sections to the dining area, 1 for each movie featured at the resort… 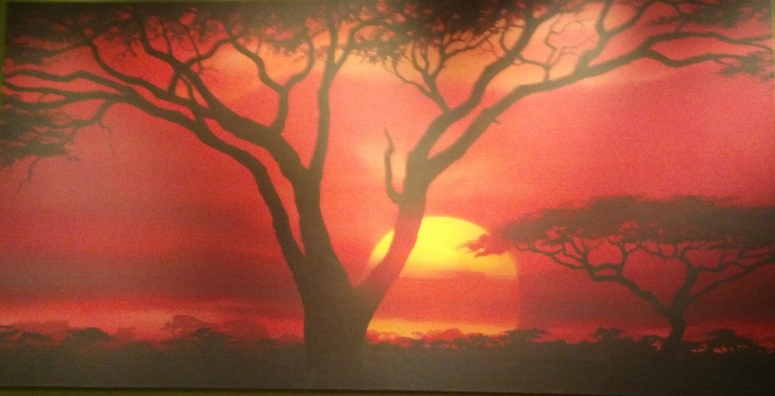 This dining experience was only the beginning. We headed out to see each wing. First, we headed off to see the Little Mermaid wing.

On the way, we went around the back side of the Lion King wing. I love the animation on the walls! 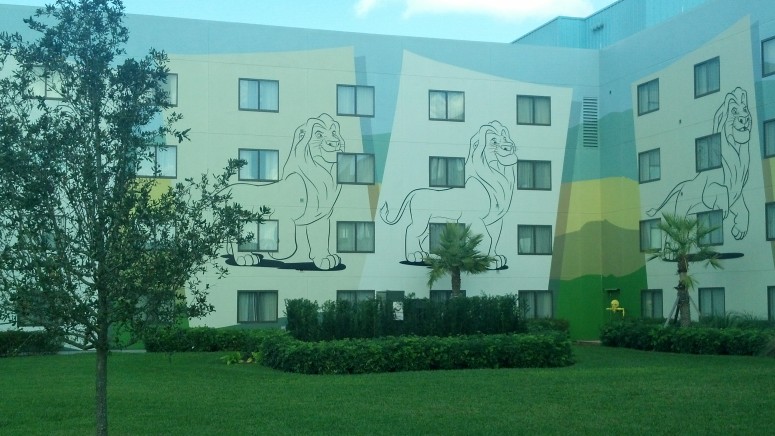 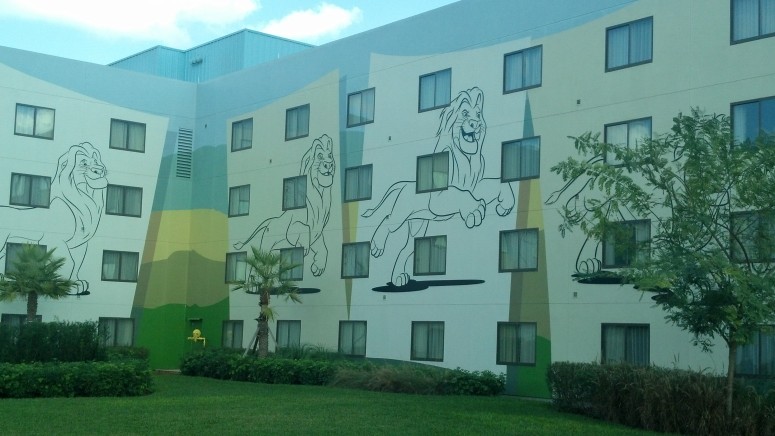 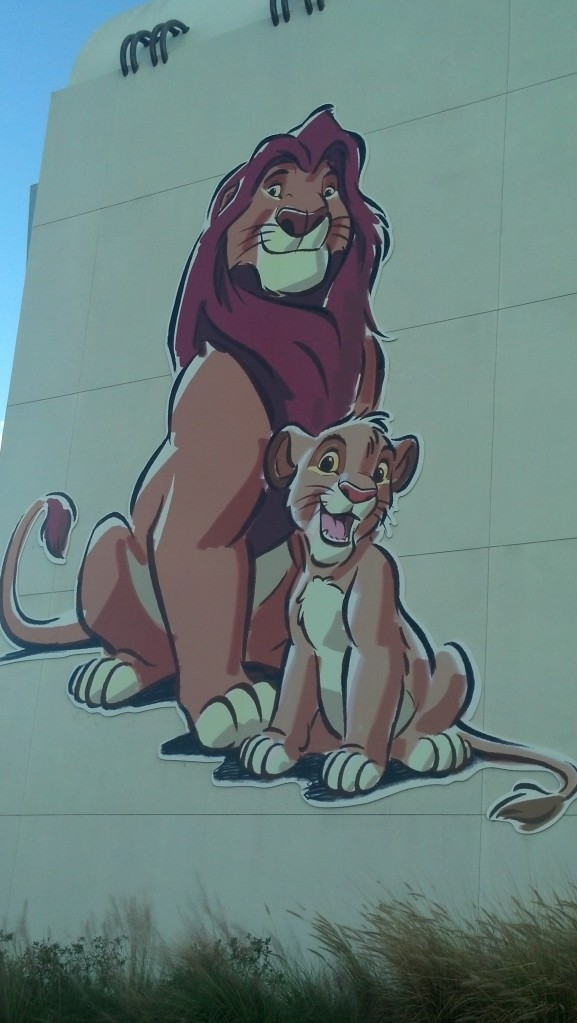 After making our way around the back of the Lion King wing, we made it to the Little Mermaid wing!

There were larger than life representations of some of the things Ariel had in her grotto.

Of course, the statue of Prince Eric.

On one side of the three buildings that made up the Little Mermaid wing, is this huge Ursula.

Right across from Ursula is King Triton to make sure Ursula doesn’t wreak havoc on anyone. 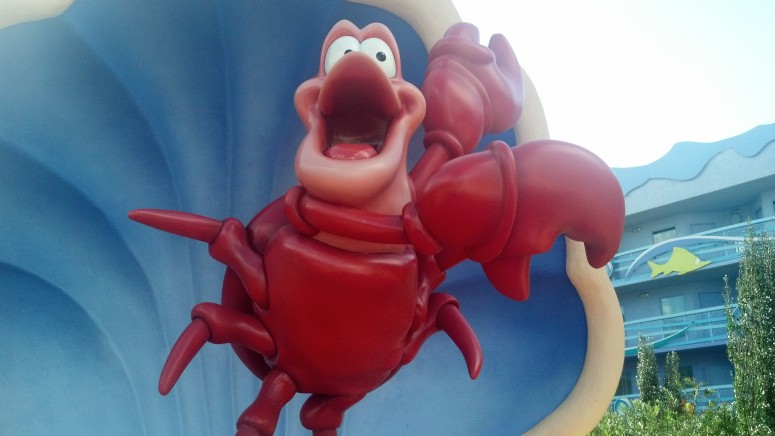 In between them, is Sebastian.

And at the very end is Ariel herself…with Flounder of course. Between Ariel and Sebastian is one of the three pools at Disney’s Art of Animation Resort. 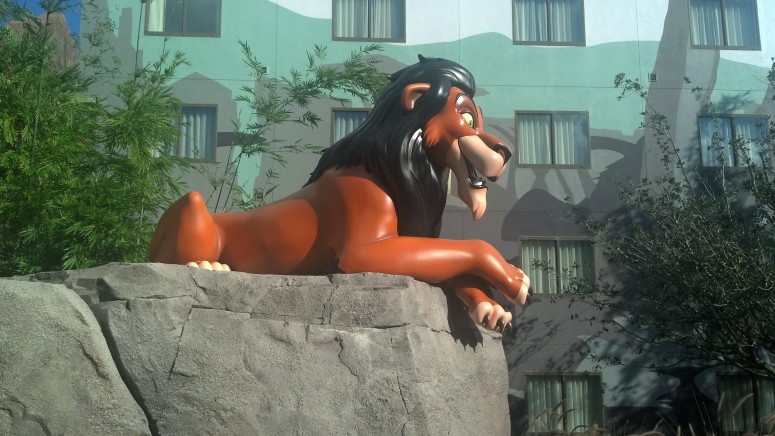 After visiting the Little Mermaid wing (and taking a lot more pictures than I’ve presented in this blog) we turned around and made our way back to the center of the Lion King wing. Watch out. Scar is perched overhead. He looks over an elephant graveyard.

Hakuna Matta! Just past the elephant graveyard is this scene with young Simba, Pumbaa, and Timon singing Hakuna Matta. Okay, so there is no actual music here. However, this is the scene that’s being recreated. 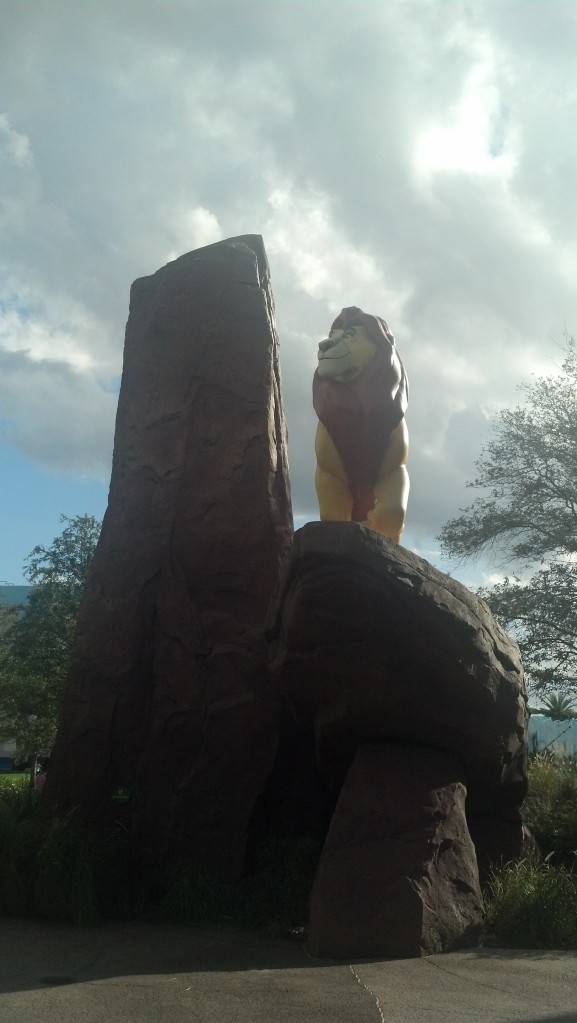 At the other end of this wing is an adult Simba (I think. Or is it Mufasa?) 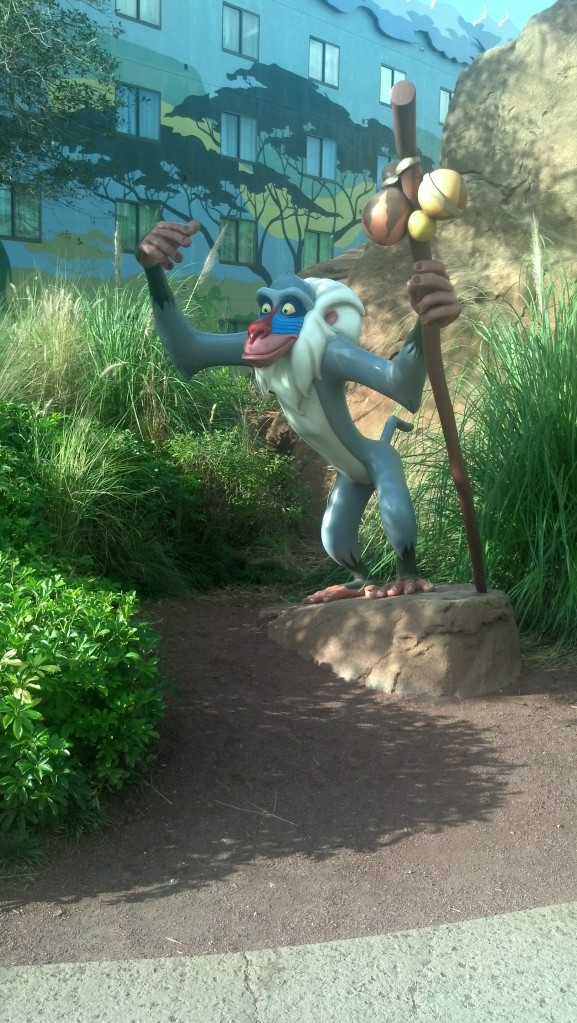 And Rafikki. So, depending on which end you enter, you are either being greeted by Rafikki or he sends you off.

By the time we got away from the Lion King wing, it was time for a restroom break. Even in the restrooms, there’s more animation.

The hallway outside of the restroom that has the entrance to the retail shop and food court has panels like this one and the one below.

So many awesome images from the 4 films. I could have stayed here all day to take it all in.

One of my favorite parts was the lobby where you check in at. The animation along this wall runs from sketch drawings to colored in images. It reflects the animation process. Pretty amazing to see! 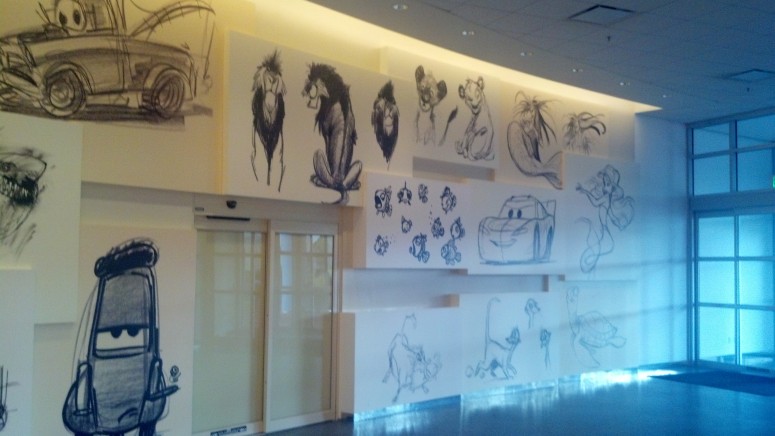 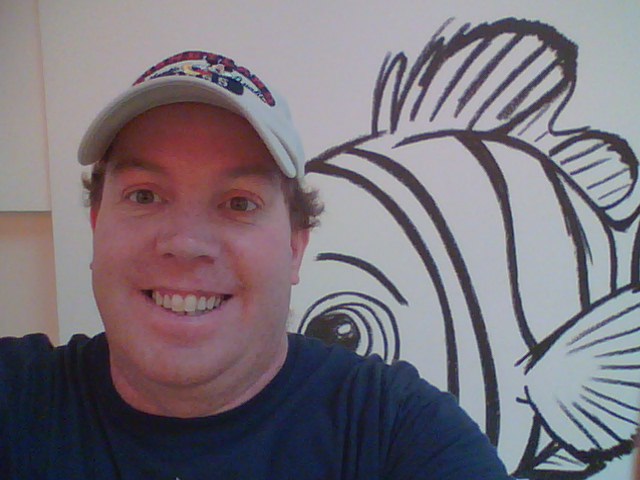 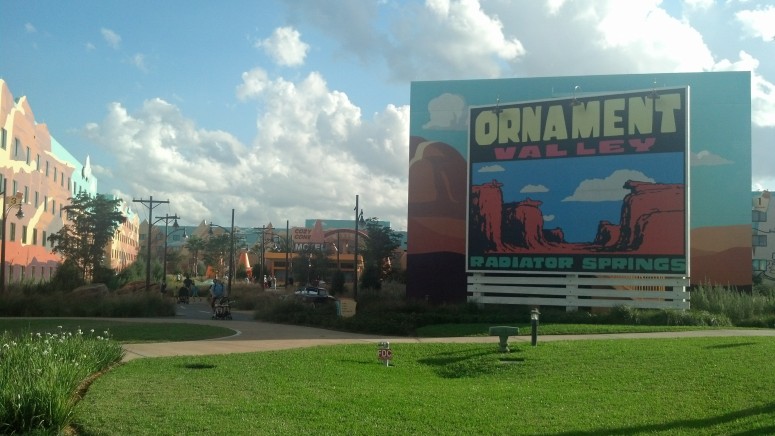 Ah, Cars Land on the East Coast! Well, maybe not. However, I loved the Cars wing. While not a complete recreation of Radiator Springs, like Cars Land at DCA, it is still really cool. 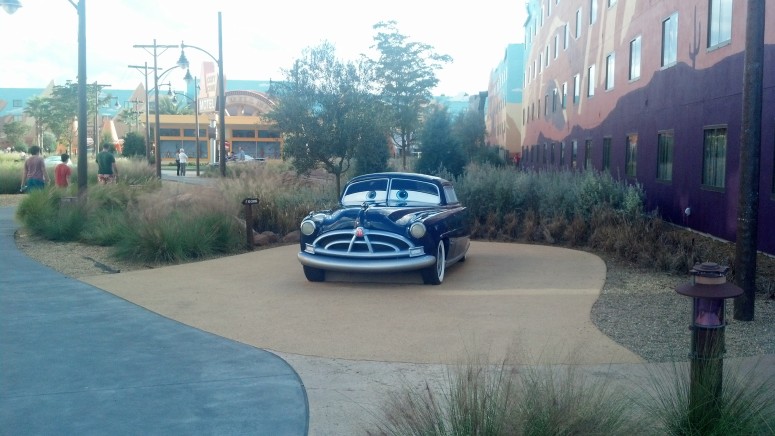 Doc Hudson! The cool thing about having Radiator Springs at a resort like this is you get to play with the cars…or at least pretend to. For me, the Cars wing has the most to offer a family with kids involved. It would be a great way to see your kiddos use up some of their energy! 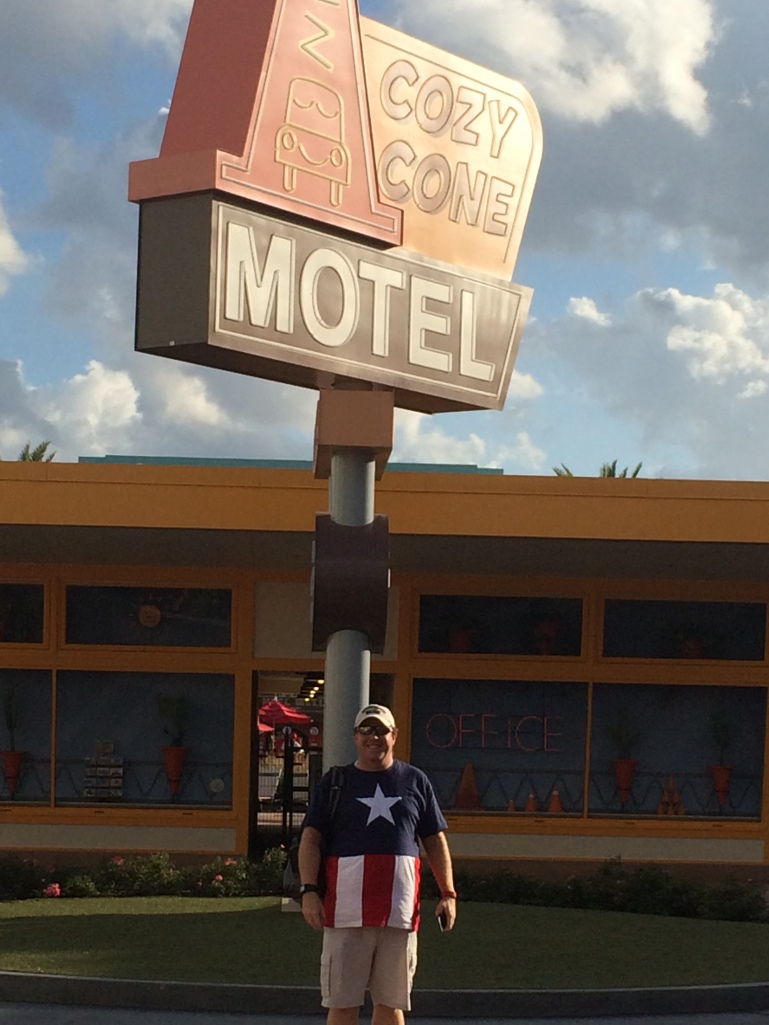 I made sure to take my new kicks to Route 66…

Had fun kickin’ it with Mater! 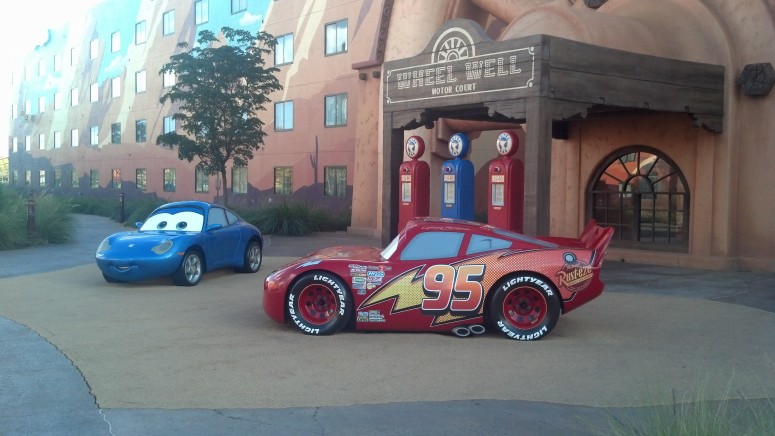 And there’s Lightning McQueen and Sally!

I am speed! I was hoping that Lightning’s speed and endurance would help me out on those 26.2 miles I had to run the next day. Lighting told me…we got this! 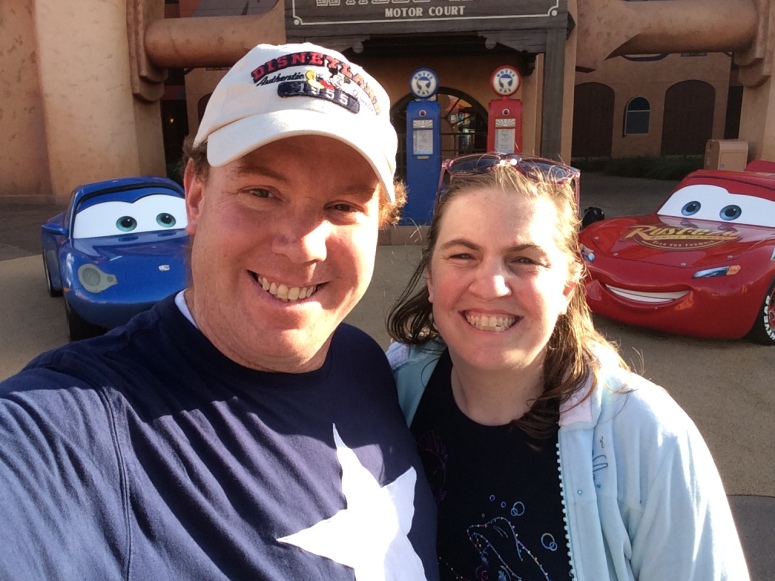 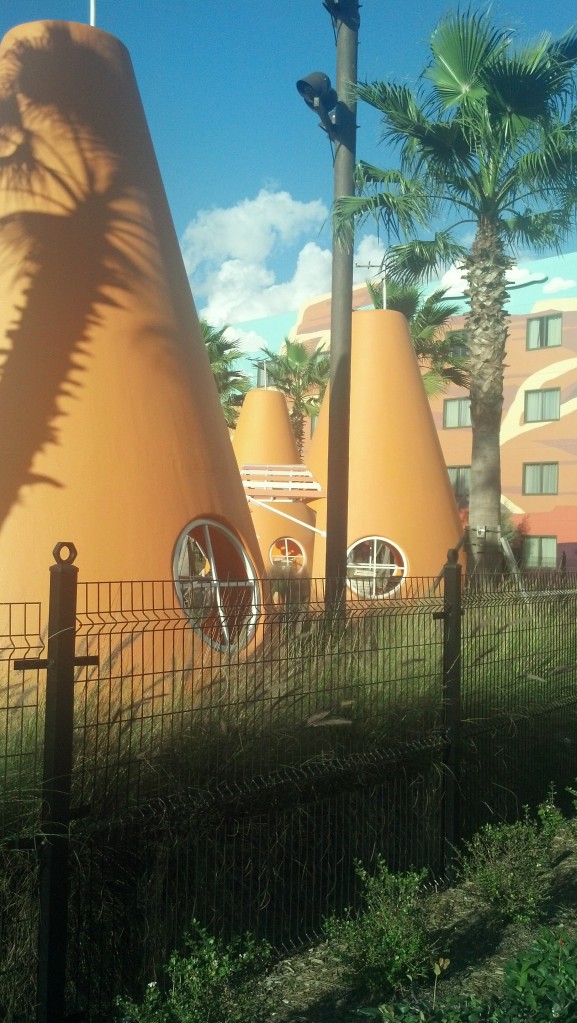 The Cozy Cones served as cabanas for the pool here.

The last wing we visited was the Finding Nemo wing. Just like the others, this one had larger than life characters all around.

Squirt was by the pool of course! 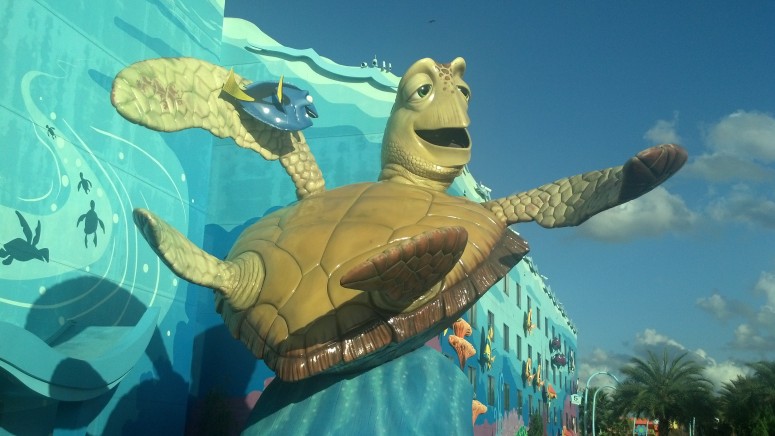 Crush and Dori weren’t too far away. I loved visiting Disney’s Art of Animation Resort! The next time Brooke and I visit Walt Disney World, I believe this is where we will stay. I say this because I believe that the next I’m back it will be with kiddos. Whether it’s my future children or visiting with my nieces and nephew from Houston, it will most likely be with kiddos. The value resorts are the way to go if you have kids.

Our dinner reservations were coming up. So, we had to leave the Art of Animation Resort and head off to Downtown Disney for my final meal before the marathon at Splitsville. We arrived with plenty of time. So, we had to stop at some of the shops. First up is a store that has so many things I find awesome but cannot afford.

Ah to have the money required to purchase some of the artwork would be awesome. However, I Iive in the suburbs of Los Angeles (where the high is 85 degrees today) and it costs an arm and a leg to live out here. But, it was perfect to go to this shop first…especially after visiting the Art of Animation Resort. Love the Disney artwork!

We saw Winnie the Pooh, Tigger, and Piglett along the way!

We also ran into Mickey and Minnie! 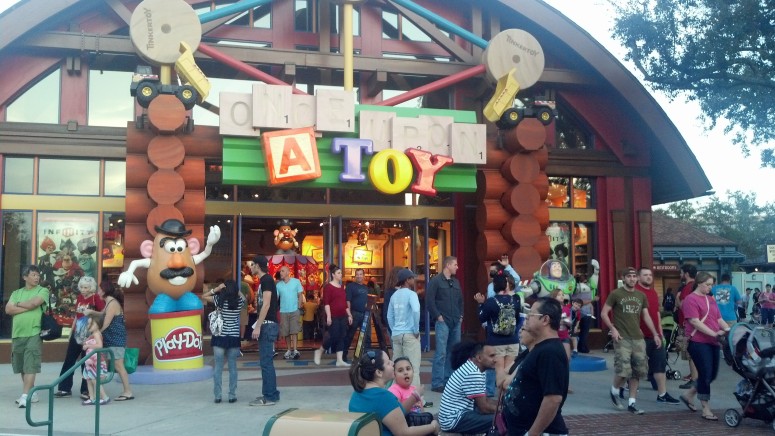 Across from Mickey and Minnie was the funnest store! 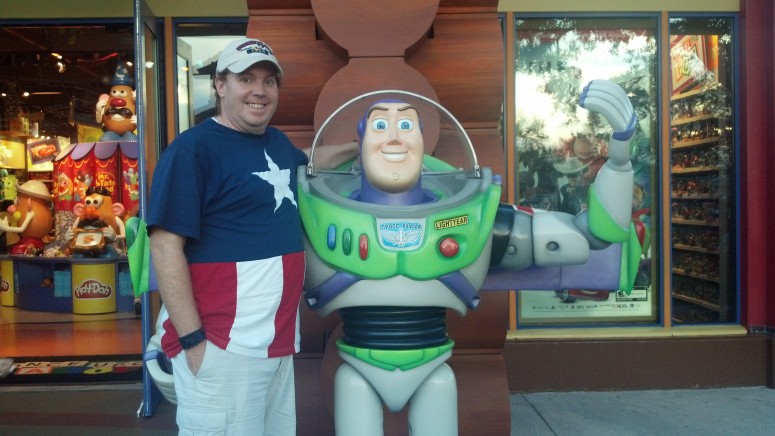 I got to say hello to Buzz and talk marathon strategy. 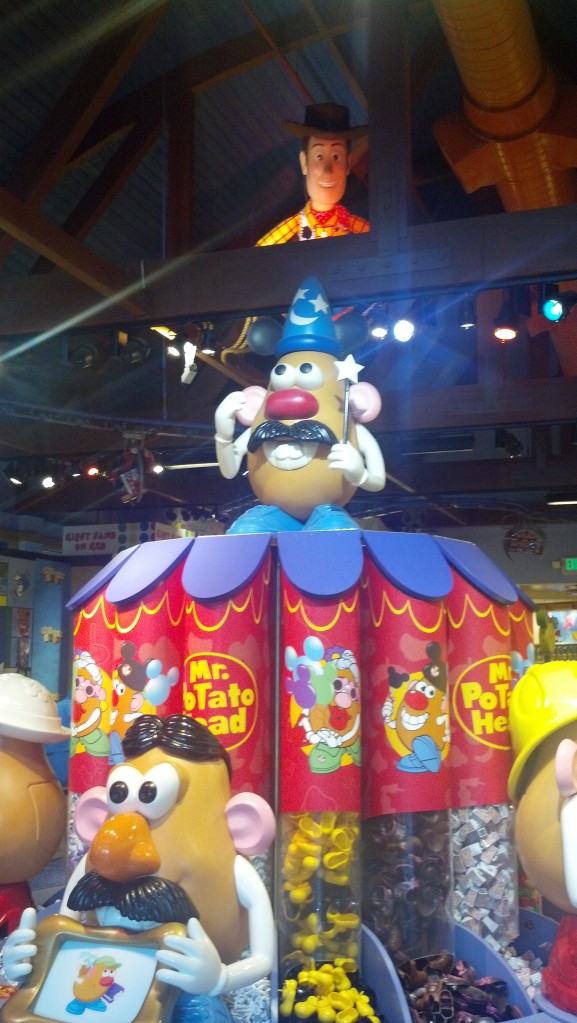 Inside, Woody was keeping an eye on things.

The inspiration for my marathon attire!

The store I must not go into or I’ll never get to dinner. I’ve been in this store before. It’s so much bigger than its counterpart in Anaheim (and I LOOOOOOOVE that store!). 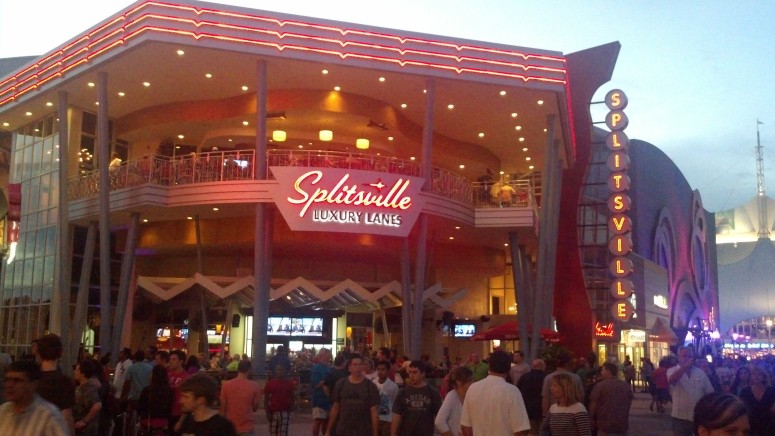 Our destination for that final meal before the marathon. I know that technically breakfast will be that meal. However a bagel and water doesn’t really qualify as a meal. Splitsville was a fun place to dine on the night before a marathon.

Yep. Ready to eat in a bowling alley. Unlike a lot of bowling alleys, Splitsville’s dining area seems to split up the bowling lanes. The atmosphere inside is absolutely fun! I enjoyed the Chicken Parmesan as my final meal. If you go to Splitsville, I’ve got to warn you that the portion sizes are pretty large. I didn’t even end up finishing my dinner.

I even got to watch part of the NFC Divisional Playoff game between the New Orleans Saints and the eventual Super Bowl Champion Seattle Seahawks!

They even sell Mickey and Minnie bowling balls! How cool is that? Oh if only I didn’t have to fly across the country to get these guys home, I would have been so tempted to buy the Mickey Mouse one. 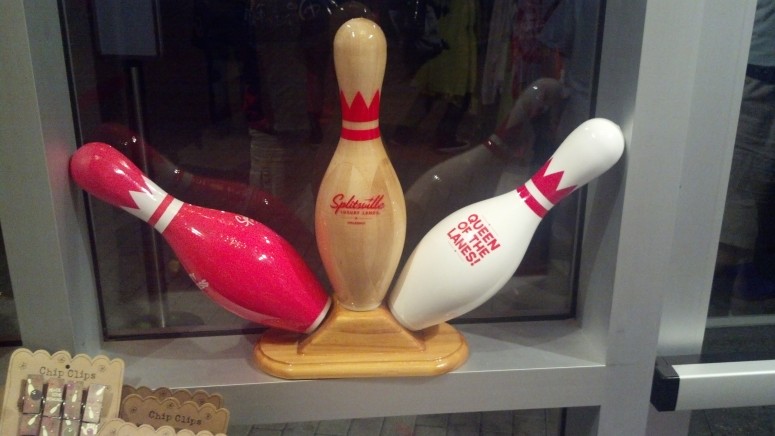 Not only is Splitsville a bowling alley with a restaurant in it. But, they’ve even themed this place up to Disney standards. I’ve never been in a place that was so “ra! ra!” bowling before. The food was really good! So much better than the food at the local bowling alley! That atmosphere can’t be beat. It’s fun and loud. I started off the say with calm and serene relaxation. Splitsville made sure I ended it full of energy and mentally feeling great and psyched to tackle 26.2 miles the next day! Unfortunately, we couldn’t stay as long as we would have liked. I did have to get back to the resort at a reasonable hour because Sunday morning had a 3am wake up time.

Downtown Disney has 2 bus stops to it. We got dropped off on one side of Downtown Disney and walked over to Splitsville. Since I had 26.2 miles to cover the next morning, I was not about to add any extra miles to this day. So, we quickly found the second bus stop and waited for our bus. We were lucky that the wait for our resort didn’t take very long. Before we knew it, we were back at the All Star Sports Resort. I had plenty of time to lay out my race gear for the next morning and was in bed by 10pm. In case you’ve forgotten, here is part 1 and part 2 of my marathon recap. Tomorrow’s blog post will be about our final full day in Orlando and the 12 hours we spent at the Magic Kingdom celebrating my completion of a full marathon. On Saturday, I’ll wrap up the entire Walt Disney World Marathon Trip with some final thoughts. It’s going to be a rare Saturday post. So, I hope you’ll continue to follow along. Thank you for reading everything in these long, photo filled blog posts thus far. By next week, I hope to have a separate tab where all of the posts related to the 2014 Walt Disney World Marathon Week will be put together.