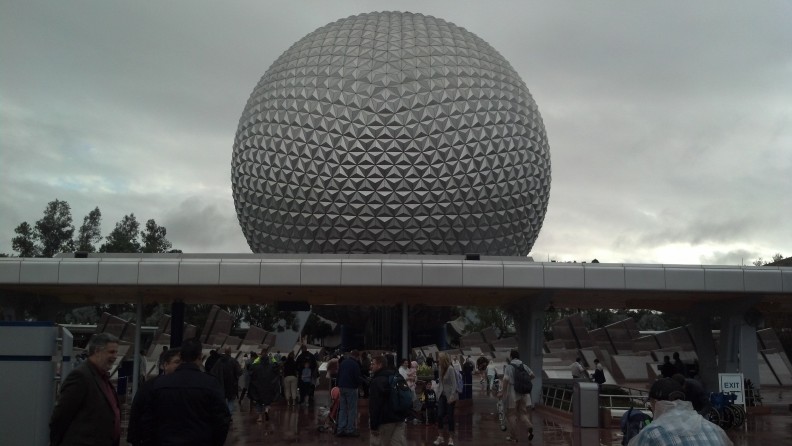 By the time Brooke and I got back to our room, her foot was bothering her. With a 10K race the next morning, we both thought it would be best for her to rest the remainder of the day. However, we still had dinner reservations at EPCOT. Brooke told me it would be fine with her if I went to EPCOT without her. So, after about a half hour nap, I was out the door and on my way to the EPCOT bus. I don’t know why, but Spaceship Earth became this really cool Disney theme park icon to me on this trip. I don’t know if it was racing 2 races that ended there or what it was. However, you will notice a lot of pictures with Spaceship Earth in this post. Be warned. 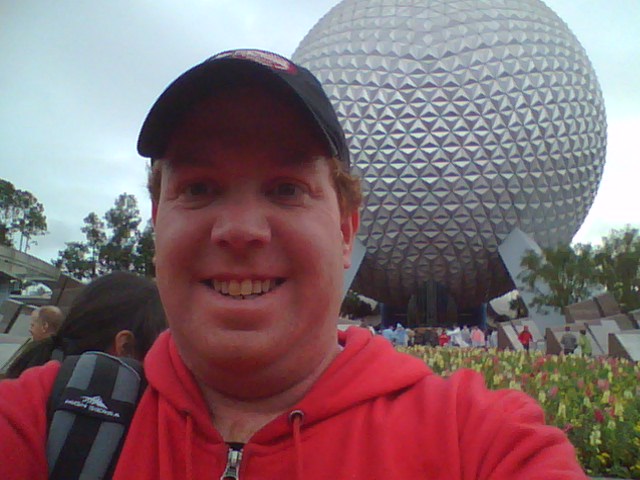 After entering, I, of course, had to get a picture with Spaceship Earth. Many EPCOT fans seem bothered when you call Spaceship Earth a giant golf ball. So, I’ll try to get it right throughout this blog post.

With a minimal line, I had to go ride Spaceship Earth. Right? So, that’s where my EPCOT adventure began.

The mural you see when you enter is really cool. For those of you who have never been. Spaceship Earth is a ride and not merely an icon of EPCOT. It’s a slow-moving ride that takes you through the history of communication. My camera isn’t great at taking pictures in dark rides. So, I don’t have any pictures of the scenes you pass through. However, it is very interesting and educational. At the start of the ride, you have a picture of you taken. They use this picture at the end for a fun video of your future. Here’s how mine came out…

I should mention that each car has two seats in them. So, if Brooke were with me, I’m assuming that there wouldn’t be two of me but one of me and one of her. Anyways, they ask you a series of questions to help shape your future. I did notice that other cars around mine didn’t have the exact same video.

After leaving Spaceship Earth, I wanted to check out the aquarium that is in The Seas Pavilion. On the way, I saw that the wait for the Character Stop was pretty small. So, I stopped in for a few photos. This would be my second photo with Mickey on Day 3 (the first was at DHS). 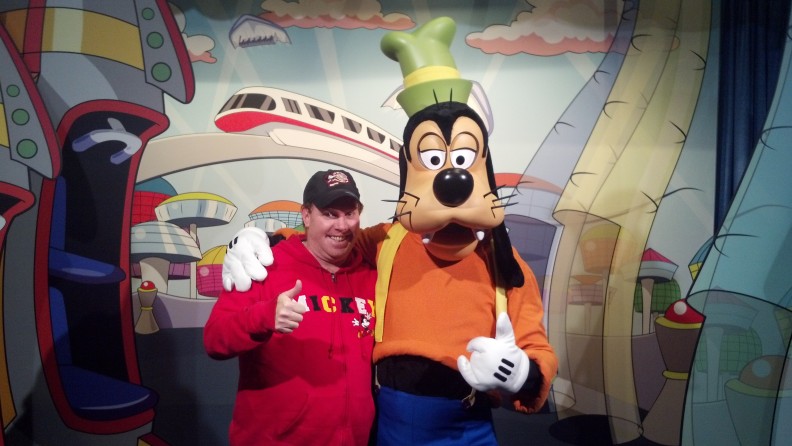 Next in line was meeting Goofy. While I wasn’t doing his race and a half challenge, he was still excited for me and my quest to finish my first full marathon!

The last in the line was meeting Minnie Mouse. I let her know that I was running in her race the next morning.

After saying good-bye to Minnie, I was off to find Nemo at The Seas Pavilion.

When Brooke and I were on our honeymoon, Brooke and I did the Nemo ride here and caught Talking with Crush. Both of those attractions have similar counterparts at the Disneyland Resort. The Nemo ride is almost a carbon copy of the Nemo Subs at Disneyland, minus being on a submarine. The Talking with Crush is the same concept as the attraction with the same name at Disney’s California Adventure. So, since Brooke wasn’t with me, I wanted to explore the aquarium area. We saw this area briefly as part of the dolphin experience we had on our first day of the honeymoon. I wanted to come back and never made it in 2009. There are lots of fun activities for kids like the above photo. 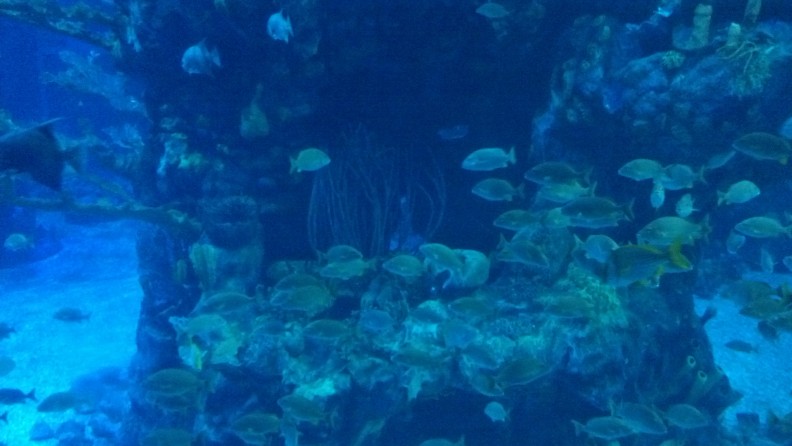 I love aquariums! It’s fun to take time to watch all the fish swim around! 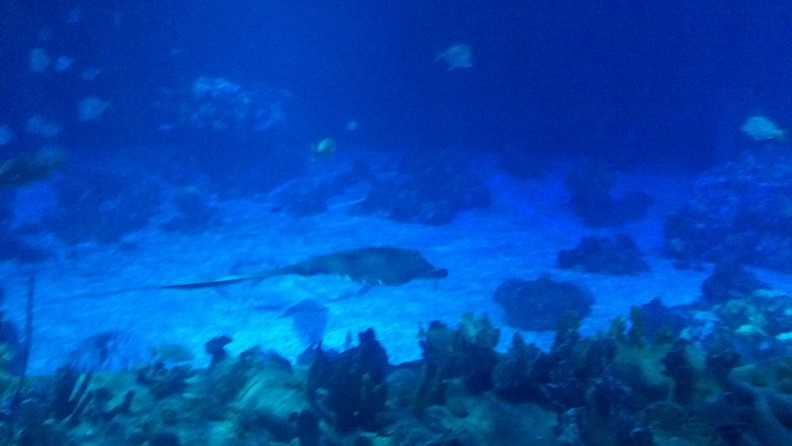 This dolphin was having a lot of fun with us onlookers. You could totally tell he was enjoying the attention!

After leaving The Seas Pavilion, I made my way around the world with a destination of the Germany Pavilion for dinner at Biergarten. EPCOT is a place where I think I could choose to dine at 2 meals a day for an entire week and still feel like I want more. Rose & Crown is one of the places I’d love to try one day.

EPCOT‘s second entrance. I’d get to run through this entrance 3 times over the course of my time at Walt Disney World. The first 2 were at the 10K race and the last time gave me my marathon moment…the one where you first feel like a marathon runner. Just inside of this area is where I heard that lady say “Here come the marathoners!” I was one of them! 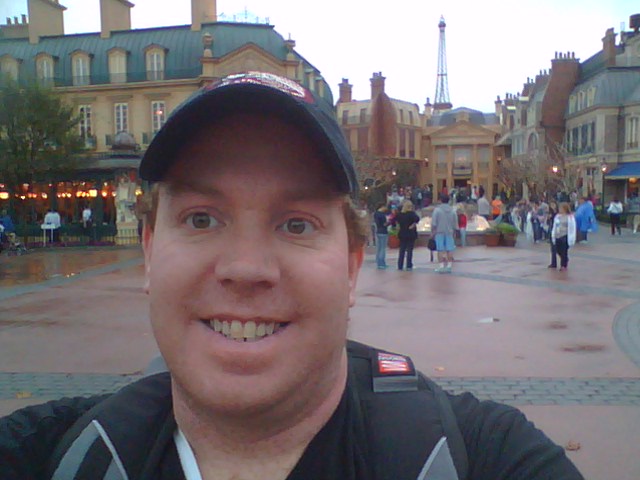 From there, I made my way over the bridge and to France!

There is a pretty cool film in this pavilion on French history. There’s also another cool restaurant that I’ll have to try out some day.

They were setting up for Illuminations while I was walking around the World Showcase. Two different Earths in the same picture. In the distance is Spaceship Earth. Closer is the spinning Earth that is used in Illuminations. 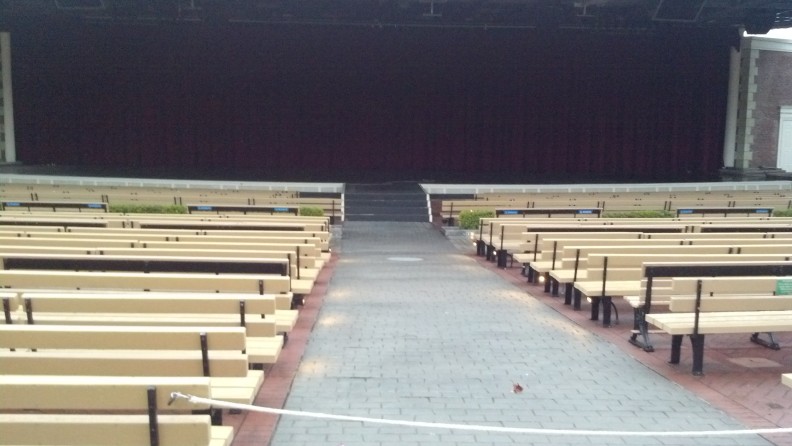 The koi pond in the Japan Pavillion is really peaceful. So, on my way around the World Showcase, I stopped for a few minutes.

The Italy Pavilion. I tried to get a reservation at a restaurant here that boasted of the best pizza in Walt Disney World. Unfortunately, it didn’t work out. 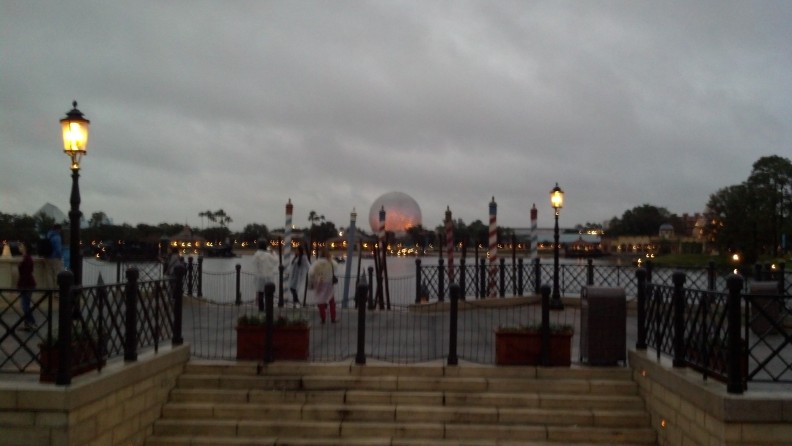 They had a little Venice set up going on. Here is Spaceship Earth by that area!

Germany at last! The details of each pavilion is amazing. It’s like stepping out of a theme park and into each location. 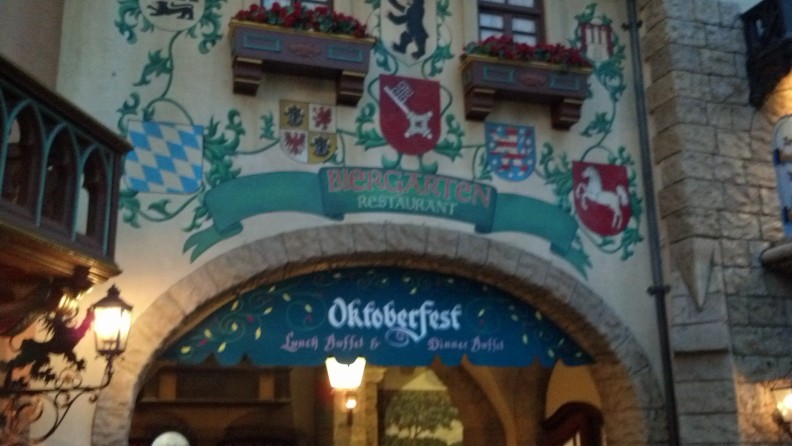 This was my destination for dinner. Biergarten Restaurant.

After checking in, I was given a pager and waited in this area.

Again, the theming is amazing! Best waiting room ever!

Eventually, I was called to enter the restaurant. 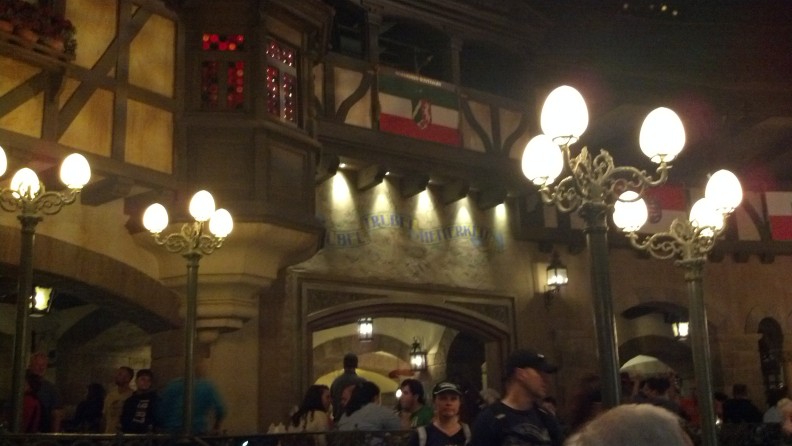 Biergarten is a huge German buffet kind of place. You sit at large tables. If your party isn’t large enough to fit the entire table, you will likely be joined by other groups to fill the table. So, this is not the restaurant for having a romantic dinner with your spouse. It is very fun, though.

The buffet consists of appetizers, entrees, and desert. Your waiter or waitress will take drink orders and let you know how the place operates. The drinks, whether of the alcoholic variety or the non-alcoholic ones come in super large glasses. Once the drink order is taken, you are free to go to the buffet and help yourself to some delicious German food. I think that it’s an all-you-can eat kind of place. So much goodness in one place was a little overwhelming!

They even have a band, named Oktoberfest Musikanten, that performs for you. The above video is only a small portion of their set to give you an idea of how fun they were!

It was a wonderful meal with fun entertainment in an awesome setting. While I know that there are more popular places to dine at EPCOT, I would absolutely give a big thumbs up to Biergarten!

My final stop in the World Showcase was the Mexico Pavilion. 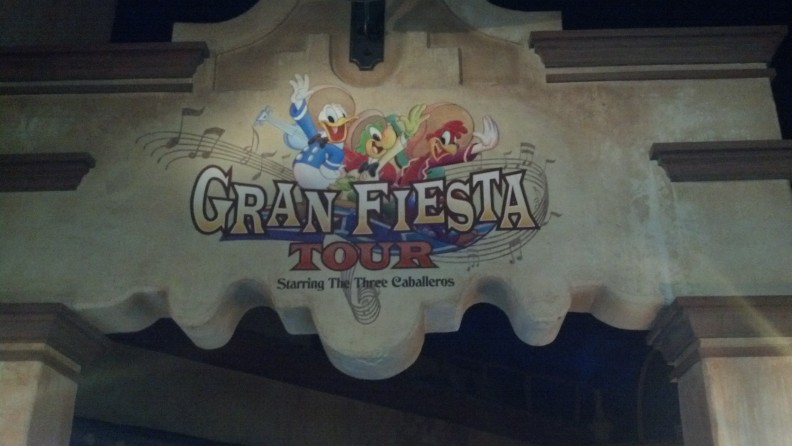 This ride reminds me a little of It’s A Small World. However, obviously it’s different. They both are slow-moving boat rides that utilize animatronics. This ride, also incorporates some video elements. 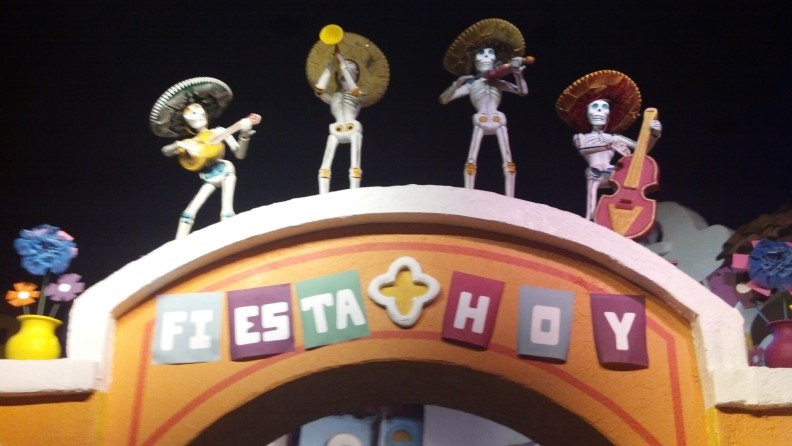 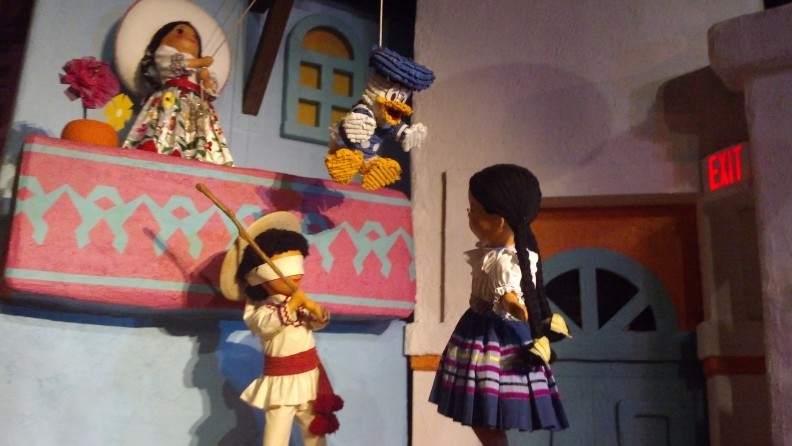 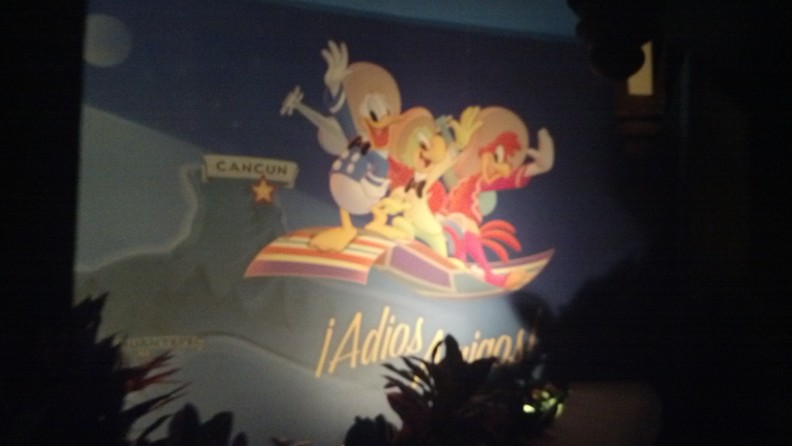 By the time I got off this ride, it was time to make my way back to the busses. After all, I had a 3am wake up call the next morning to race the Inaugural Walt Disney World 10K.

As I made my way out of the World Showcase, I had to stop for another picture of Spaceship Earth all lit up. 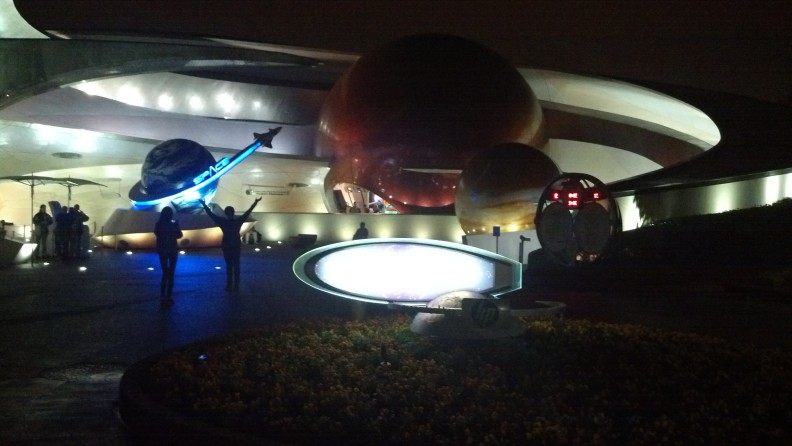 When Brooke and I were at EPCOT on our honeymoon, we never made it over to the part of EPCOT where Mission: Space and Test Track were located. It should be noted that Test Track was not working while we were at EPCOT before. So, even though I would have loved to ride at least Test Track, there was not enough time. However, I did want to see this part of EPCOT.

Same with Test Track. Maybe the next time I’m at EPCOT, I’ll find the time to ride this one. After all, this attraction uses the same technology as Radiator Springs Racers and I love that ride at DCA. 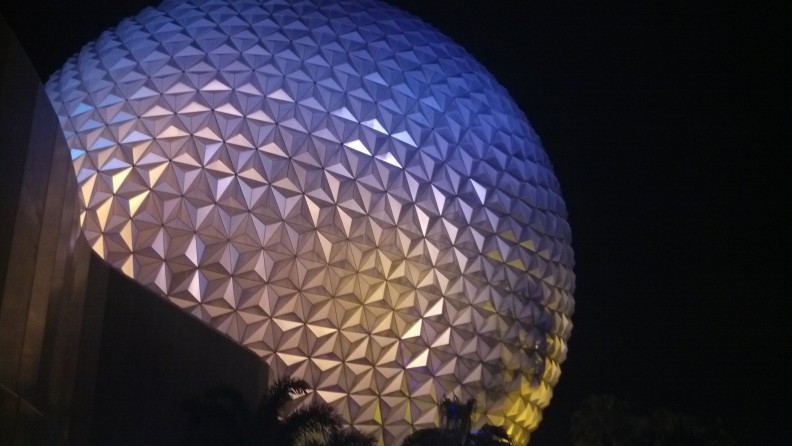 On my way out, I took in a few more photos of Spaceship Earth!

I think I could have stayed longer if I wasn’t racing the next morning. EPCOT is my second favorite Disney theme park (Disneyland is still my favorite). In a perfect world, we would have spent two days at EPCOT alone. However, with two races and two early wake up calls, it just didn’t work out that way this time. EPCOT is an amazing theme park to visit. It’s not your typical Disney theme park. Each World Showcase Pavilion has different interesting experiences. Some attractions are rides, others movies, and others shows. I think anyone could easily spend an entire day in the World Showcase alone. Maybe the next time I come out, I’ll just do a lot of park hopping and come back to EPCOT each day for a different meal. Oh to dream. For this trip, it was time to get back to my resort for some sleep before the 10K.