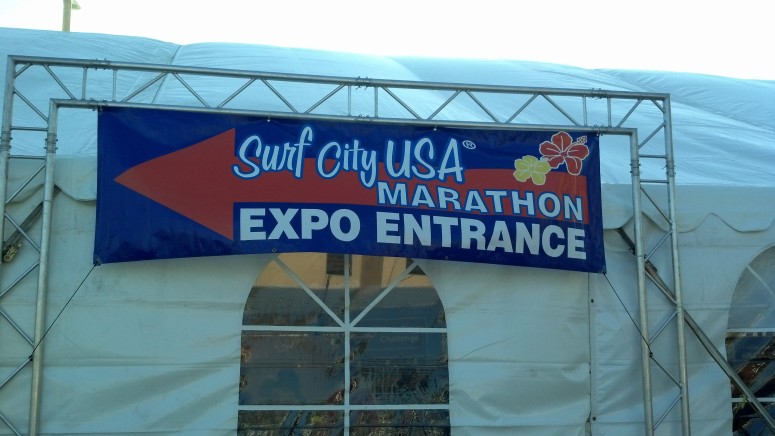 Yesterday, I ran in my first post Walt Disney World Marathon race…the Surf City Half Marathon. Like is the case with most races, the experience began with a health expo. They held the Expo on Friday night and Saturday. All participants were required to pick up their race packets prior to the start of the race. So, since I couldn’t make it on Friday, I headed down Saturday afternoon to Huntington Beach to check out the Expo and pick up my race bib.

So, Huntington Beach instituted a new way of paying for parking on Saturday. You could either call the phone number on this sign or download the mobile phone app and pay that way. As we were talking with the helpful worker who was stationed right next to the sign, we learned that Saturday was the first day of this program. While it was inconvenient, I downloaded the app and paid for 2 hours of parking. While that may have been inconvenient, I ended up liking the app. After all, for anyone who has paid for parking and tried to remember exactly when their “meter” was up, having an app like this one is brilliant. You can check the app to see how much time you have left. As I would later find out, the app sends you a message to let you know when your time is about to expire. So, if you’re nowhere near your car, you have the option of high-tailing it to the car. Or, you can add time to your parking right from your phone. When I come back to run at Huntington Beach in training, like I know I will, this app will prove to be very handy. 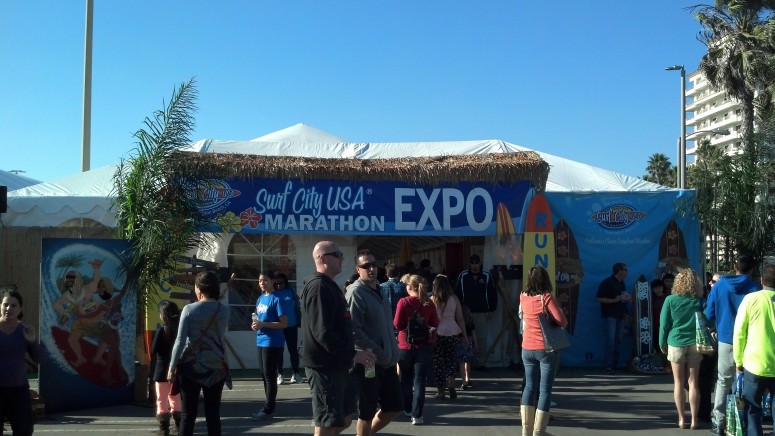 After paying for parking, it was time to walk over to the expo. I LOVED the entrance. So fun! 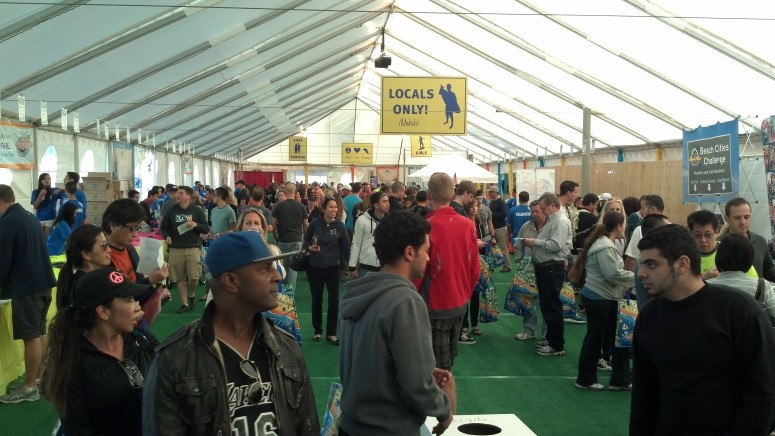 Once in, there were people to direct you where to go for picking up your race bib. There were a lot of people in the “big top” as they called it. However, the lines broke up the race numbers pretty well. I had 2 people in front of me and got my number quickly. From there, I was sent down a little further to get my race shirt and a Surf City Full and Half Marathon bag which they put the shirt in. There wasn’t any other SWAG. 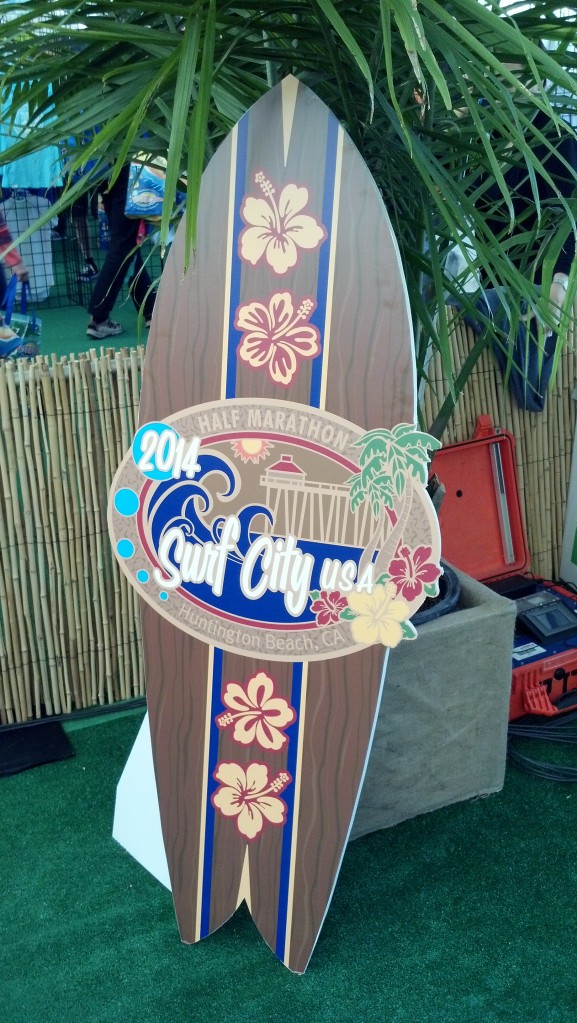 Then, it was off to the official race gear section. Gotta love the signage for this event!

I wasn’t going to buy any race merch at this expo. After all, last week, I gave Disney quite a bit of money for the Dumbo Double Dare. To be honest, I didn’t expect much in the way of race merchandise. However, I was pleasantly surprised. If I hadn’t given so much money to Disney, I would have been seriously tempted to buy some of the Surf City Full and Half Marathon merchandise. 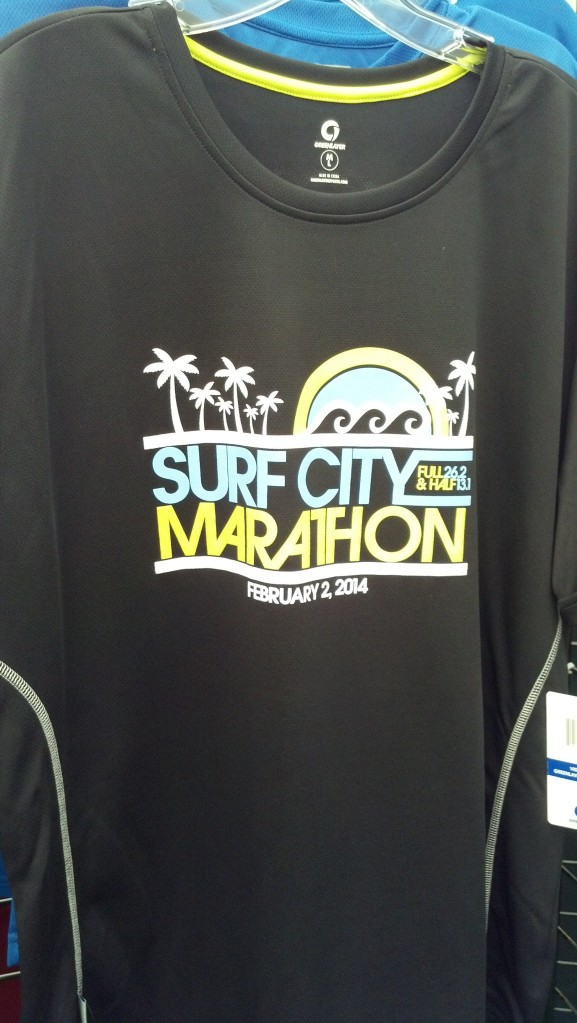 This shirt was my favorite. If only I had the money. Or, if they only had my size (which they didn’t). If I actually wanted to purchase the merchandise, I would have taken a half day at work on Friday and gone to the expo then. After all, the folks that ran the Surf City Full and Half Marathon sent out an email warning us that the merch sells pretty quickly. 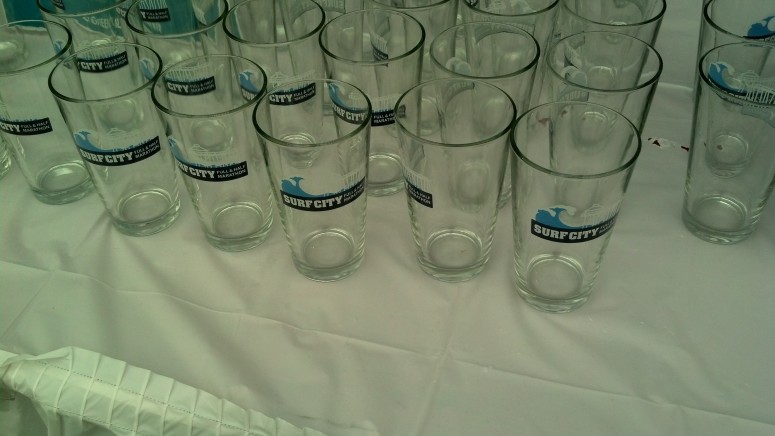 Unlike the shirts, the glassware was NOT calling my name.

There were a lot of the usual suspects at the Expo. The line to get samples at the Cliff Bar station was insane. I had no problems passing on these free items!

Another view of the same area.

I must say that this expo did a pretty good job with theming! You always expect good theming at the runDisney races. However, this race, the Surf City Full and Half Marathon, was likewise cleverly themed. There were lots of fun signs like the “Surfer Crossing” sign throughout the big top. 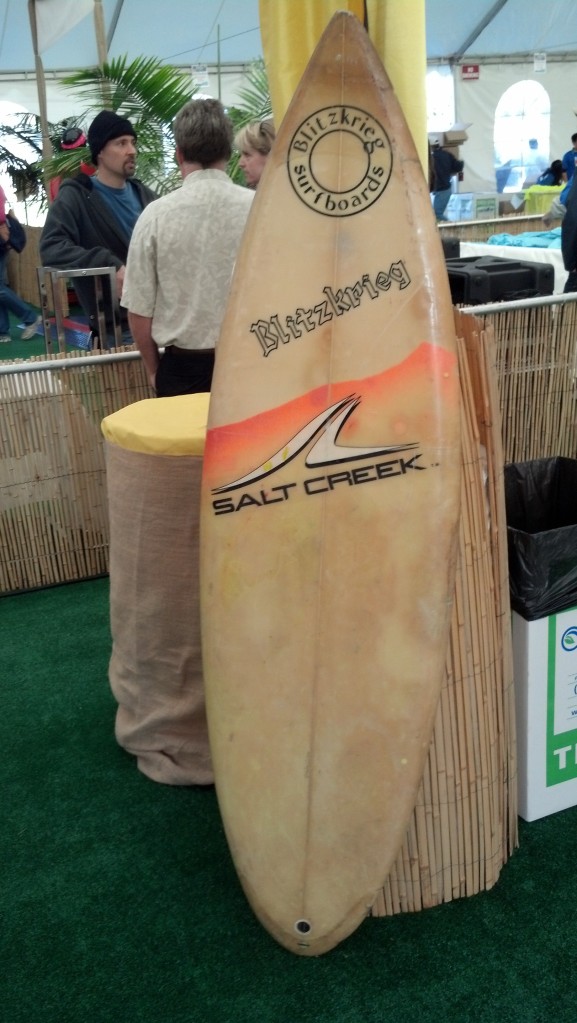 This was one of my favorite surf boards out on the expo floor. 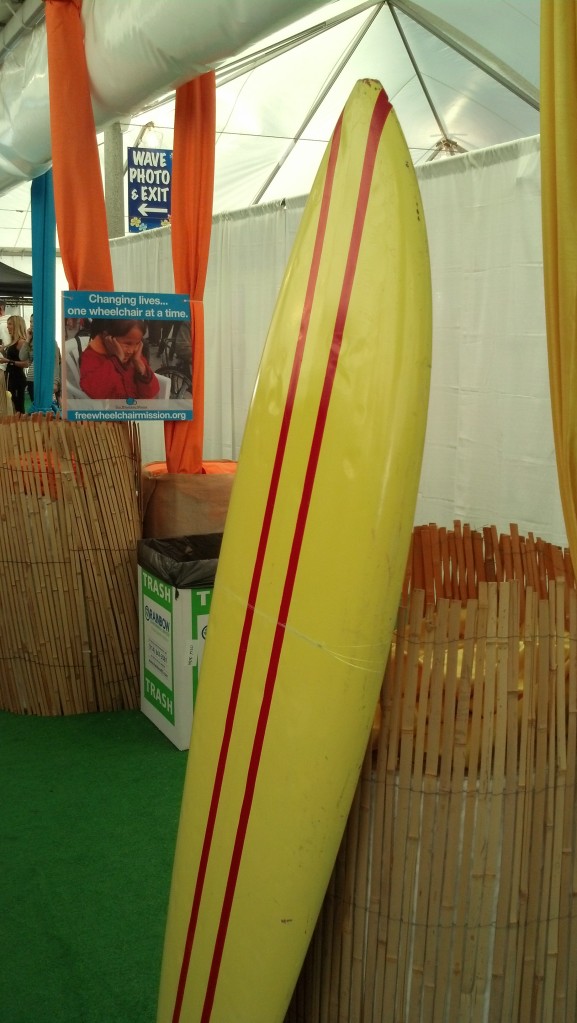 There were lots of surf boards on the Expo floor!

On the second side of the Expo floor, it was crowded. However, if you went down this isle, there were no crowding issues at all.

One of the rather unique stands belonged to Dunkin’ Donuts. They don’t have any of these in Southern California. 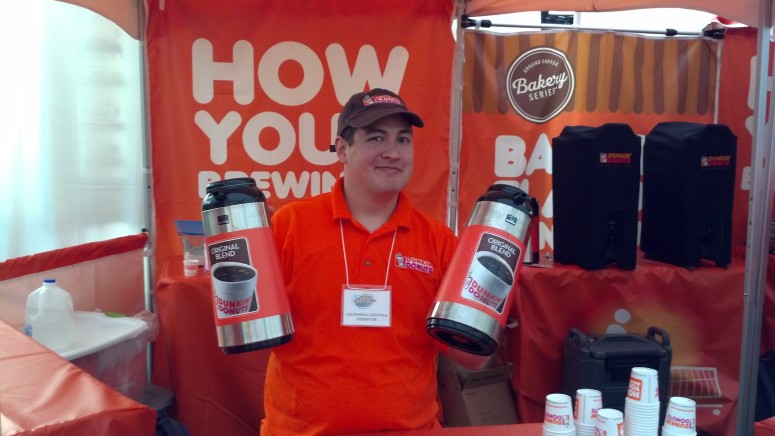 Although, according to this gentleman, who posed for this picture, Dunkin’ Donuts will be coming to Southern California in 2015! I’m sure there are a lot of people who will be happy when that happens.

One of the photo spots I’ve seen others post from this race is the wave photo. So, of course, I had to go over and get mine. 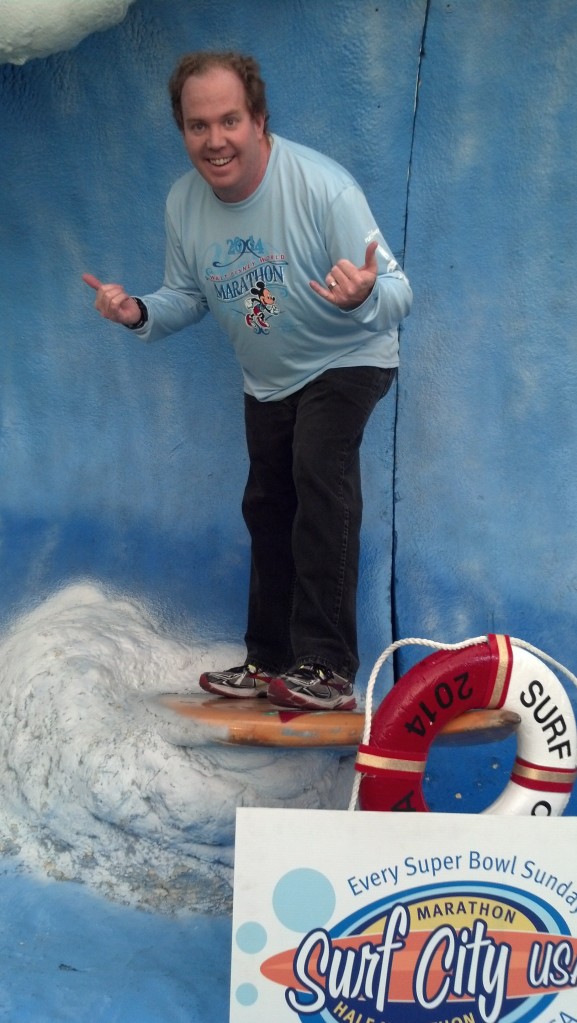 I loved that they had people staffed at the photo locations to take your photo for you! 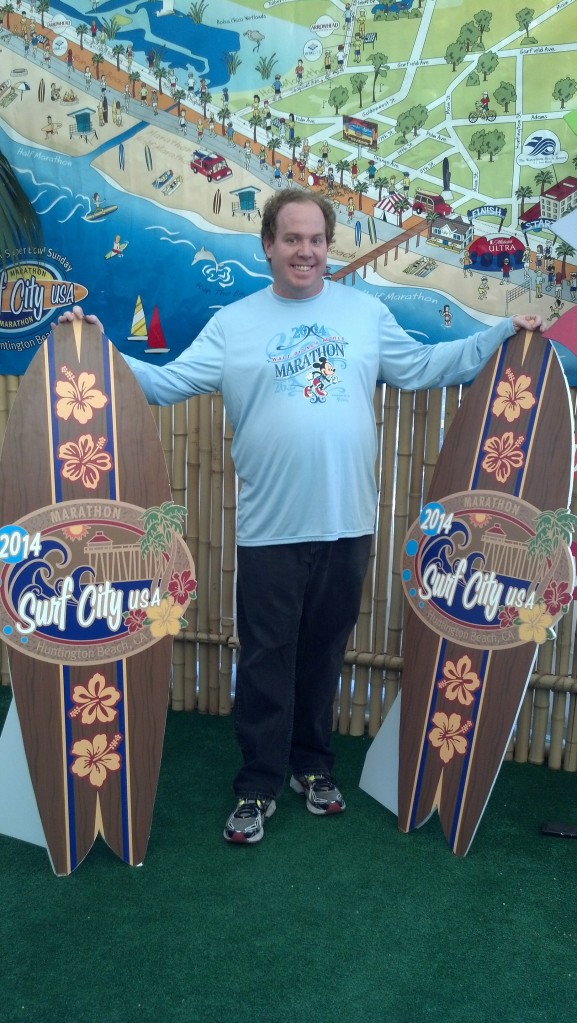 Next to the wave, was this photo stop. The gentleman there was generous enough to take not 1…

Right at the exit, there was this booth that proved to be very informative. They had lots of great information that runners would need for the next day. There were parking maps, directions, etc. The staff was great in helping us get any information we’d need!

After leaving the tent where the expo was located, I walked around and noticed some of the things that wouldn’t be placed until early the next day. See the Start line? There’s also a big American flag for the Star Spangled Banner!

Looks like the staging area for those that are in charge of this event.

My best attempt at a selfie with the statue. Unfortunately, the location of the sun made getting a great shot hard. 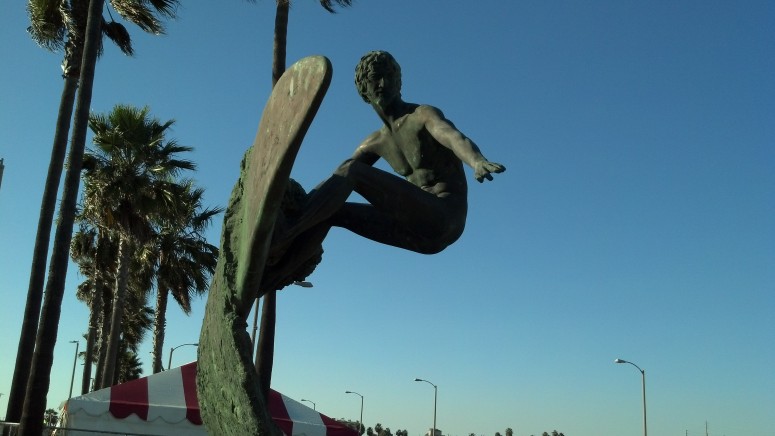 This is probably the best angle for a picture of that statue.

Ah, the Huntington Beach Pier off in the distance. Having a health expo at the beach made for a crowded space. However, the views outside were absolutely perfect!

Well, the sun was getting ready to set and I needed to make the 1 hour, plus, drive back home. Good night Huntington Beach. See you tomorrow!