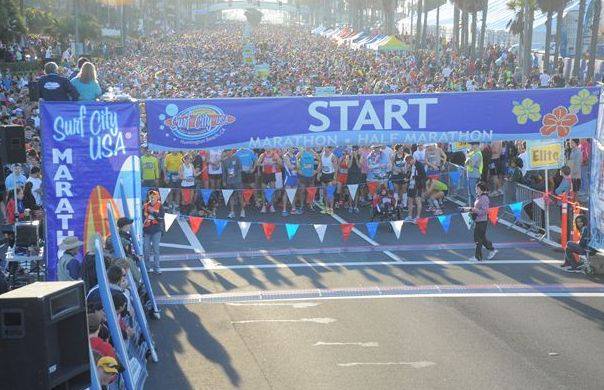 Before heading off to Walt Disney World to run in the marathon, it was important for me to have another race on the calendar after the marathon to keep me going. When I first started reading runner blogs a year ago, I saw a few from people who ran in this race last year and loved it! I mean, look at the finishers medal…

The surf board finishers medal alone was enough to pique my interest. I saw them up close at both the expos for the Long Beach Marathon and Rock n Roll Los Angeles Half Marathons. I also saw this cool medal… If you’ve been following this blog long enough, you know that I love running at the beach! Huntington Beach, where the Surf City USA Marathon/Half Marathon will be happening is a beach I’ve completed several training runs at in preparation for both the 2013 Disneyland Half Marathon and 2014 Walt Disney World Marathon. The picture above was taken at the end of my first 20 mile run. So, another reason I chose this run was because I already love running in the area. Yesterday, I found this helpful web site, View the Race, that has the pertinent details about the course. Included is this video of the roads I’ll be running this coming Sunday. Check it out.

As you can see, the course is relatively flat which will be great. Also, I checked and the weather will be pretty cool. 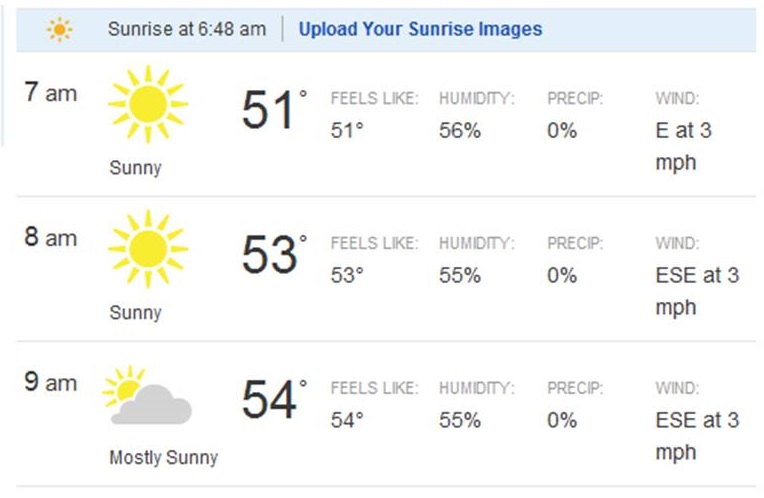 Yes, the temps in Southern California have finally cooled off. Earlier in the week there was a weather forecast of some rain. So, glad that’s not in the forecast for Sunday morning! The full marathon kicks off at 6:30am and the first wave of half marathon runners starts at 7:45am.

I am going to be in race bib #16890. So, I’ll be starting at 8:07am if all goes according to plan. It looks like there will be over 20,000 runners in total running the two big races. So, it should be fun! To be honest, I’m not super confident of how I’ll finish, time wise. With 3 weeks between a full marathon and this half marathon, I had no clue about training. So, I decided this race would be one where I just have to go with what my body has on race day. Last Saturday, I ran 10 miles at the Rose Bowl in 2 hours, 3 minutes. That’s a few minutes slower than I finished the same distance at the Rock n Roll Los Angeles Half Marathon. Also, this week, I’ve had to shut down my running. Since just before New Years, I’ve been dealing with a persistent cough. I went to Urgent Care to see a doctor about it on Monday. The diagnosis was that I’m at the tail end of an upper respiratory infection. So, no outside running in the cold for me this week. The meds I’ve been on should have me okay for race day. However, the one week off will could cause problems with my finish time. We will see how it all works out. I’m not going to risk further illness by pushing myself too hard. However, I also know that I won’t know how my body will respond until I’m on the course. If I need to take it slower, I will. If the rest my body took this week was exactly what I needed and I feel good, I’ll go faster. Either way, the main goal is to enjoy running by the beach, get my surf board finishers medal, and finish the first of three races in the Beach Cities Challenge.

Everything starts off today and tomorrow with the Expo. Today the hours of the expo are from 3:00 – 7:00pm. With my work schedule, I won’t be able to make it today. However, tomorrow, the Expo will be open from 9:00am – 5:00pm. So, I will absolutely be able make it. Also, with no race day packet pick up, I need to show up tomorrow to get my bib and other materials in the race packet. I saw some really fun photos from the Expo last year. Can’t wait to see what the Surf City USA Marathon Expo is like.

I’m hoping that my Super Bowl Sunday will have a super start to the day at the Surf City USA Half Marathon!