On Friday, January 10, 2014, it was time for the first of two races I would be participating in for the 2014 Walt Disney World Marathon Weekend…the Inaugural Walt Disney World 10K race! This was the race that Brooke and I would be running in together. When the race was first announced back in March, both Brooke and I were excited about getting to run in Minnie’s race. After all, I would be getting both a Mickey and a Minnie medal for finishing the Marathon and 10K races. Cool. Right? After running in the Inaugural Disneyland 10K race this past August, I was even more excited about being able to say I ran in the first 2 runDisney 10K races! The Disneyland 10K race was so much fun and featured a fantastic course. One thing these races shared was humidity. Although, the heat back in August made that race feel a lot worse than this one. 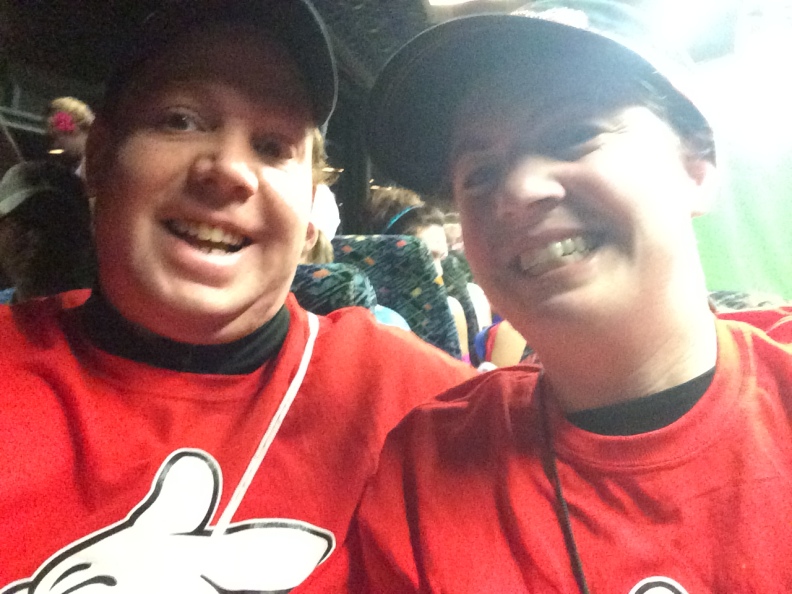 The day began with a 3am wake up call. For this non-morning person, it was very early. Brooke and I brought protein bars to eat before the race and had lots of water as well. Our actual breakfast would come after we were done. We made it to the busses around 3:30am. We look pretty perky for 3:30am, don’t we? 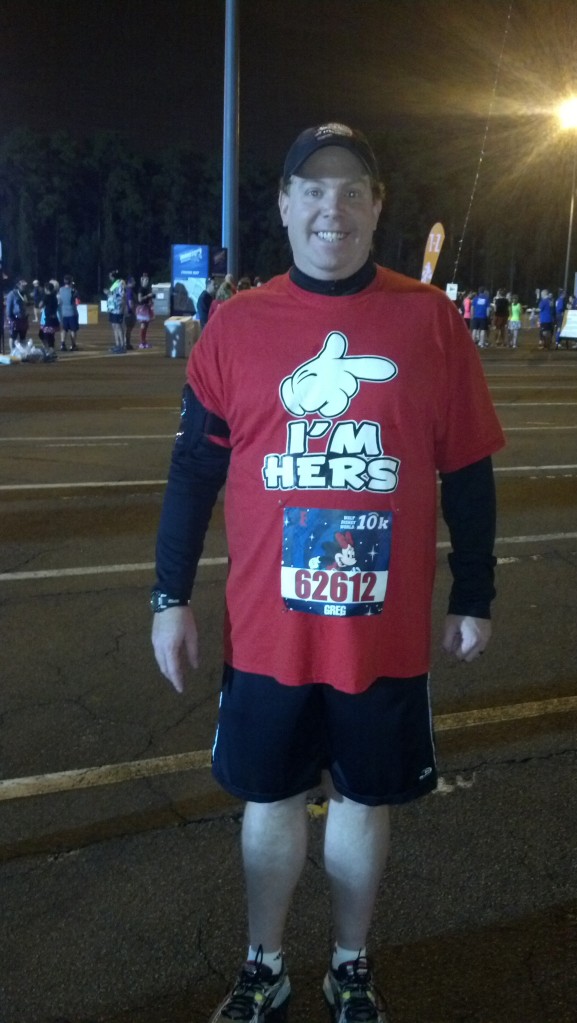 We arrived at EPCOT in no time and quickly got our bag checked. Then, it was time to wait. 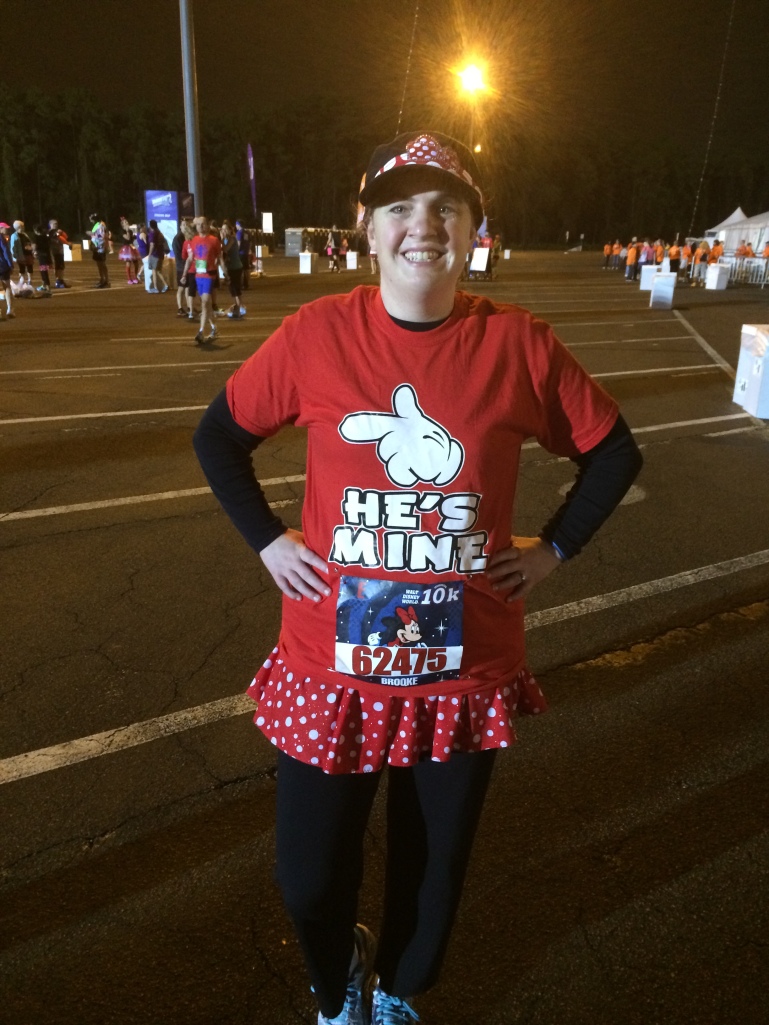 At around 4am, there was a meet up for the Facebook group I’m apart of called Team #runDisney. If you’re a runDisney fan, you should absolutely join this group. I got to see a few faces that I met back at the Disneyland Half Marathon meet up. I also got to meet some new people. It was awesome to meet Ian who writes the  Philly2Goofy blog. (He’s started recapping his WDW Marathon experience, read that first recap here.) Ian ran as Buzz Lightyear for the 10K. Although, his costume is a little different from my marathon costume. If you haven’t checked out his blog yet, you should. He’s a nice guy who runs in more than the runDisney races. I also got to meet Sarah and Matthew from the Sparkly Runner blog. (you can read her recap of the 10K here.) She provided the stellar recap of character spots for the various runDisney WDW Marathon Weekend races. Again, more super nice runners. Sarah’s pictures are pretty cool. I highly recomend checking out her blog. 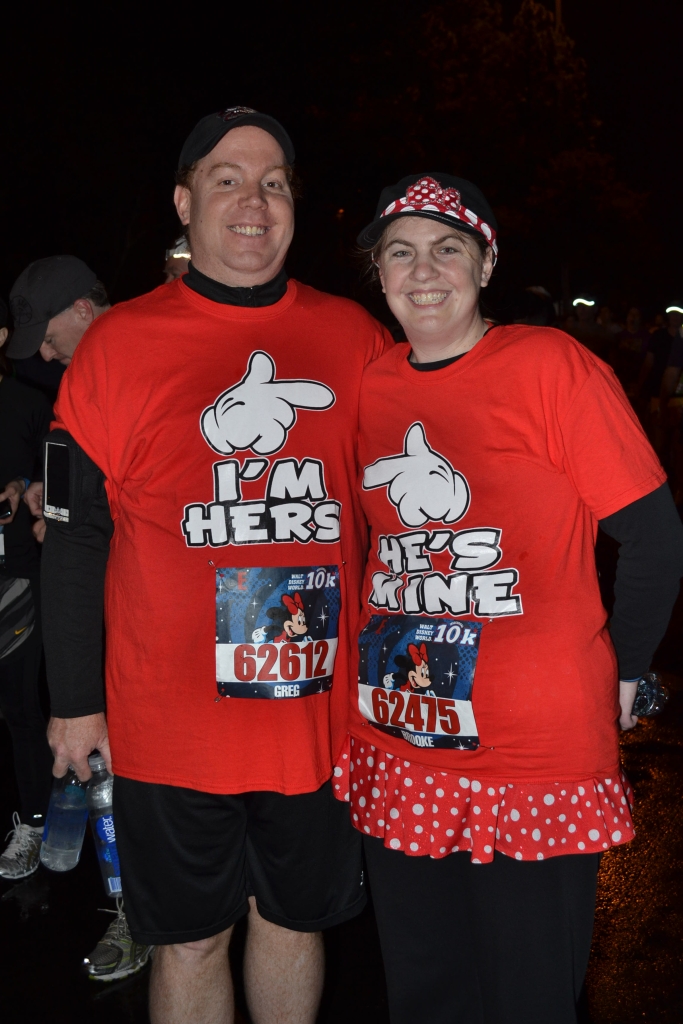 After the meet up, we were off to our starting corral. 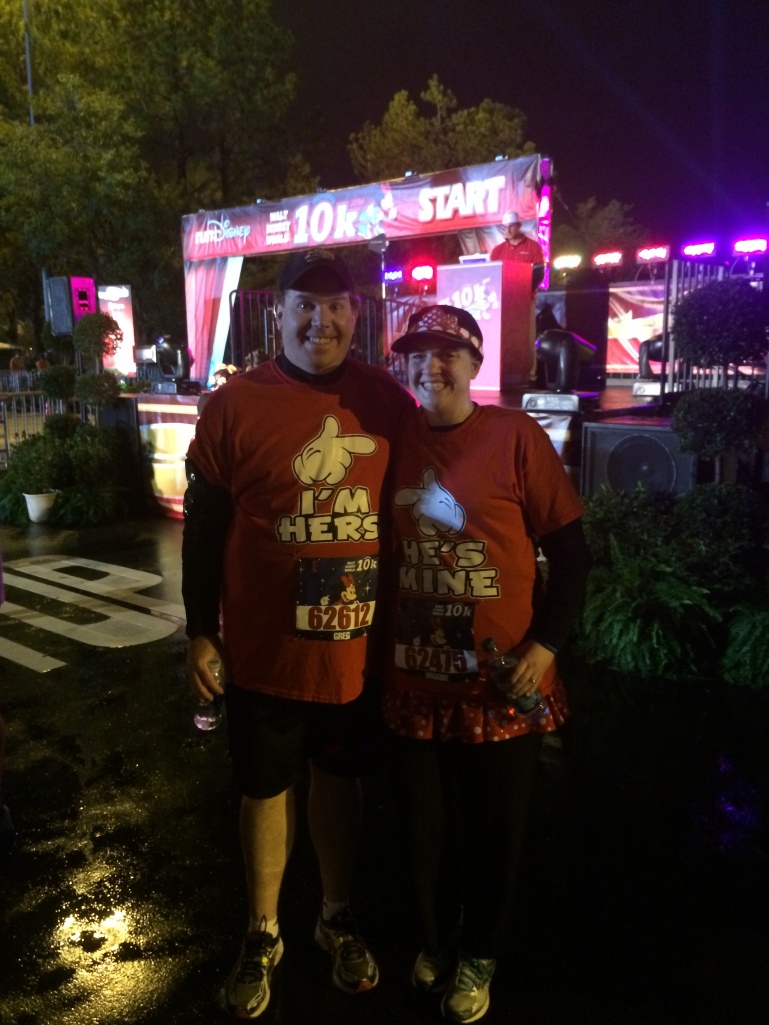 Unlike the half marathon and marathon, the route to the start corrals is not that far away. We even got to take a few pics with the start line in the background. 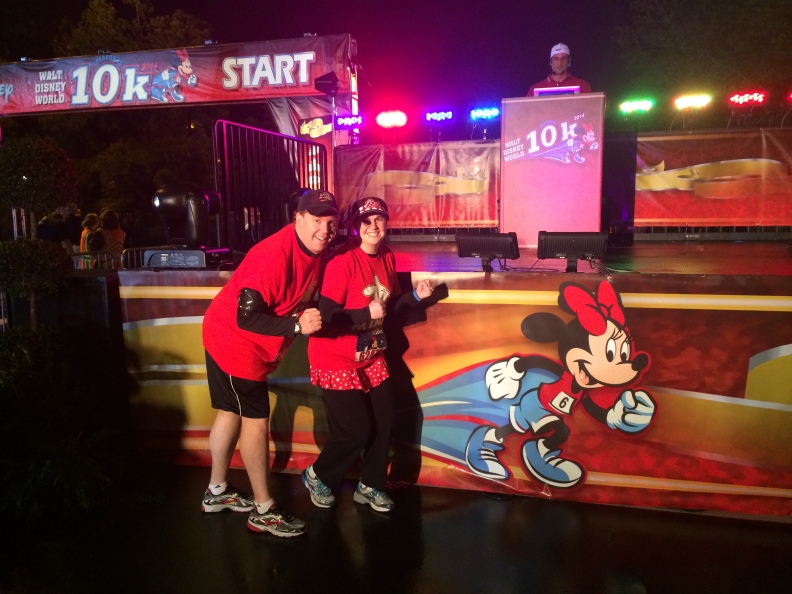 We were ready to go. Karen from Run, Knit, Travel, posted the image below on her blog post about the WDW 10K that shows how the corrals were organized. It’s a different organization than you have with the half marathon and marathon. 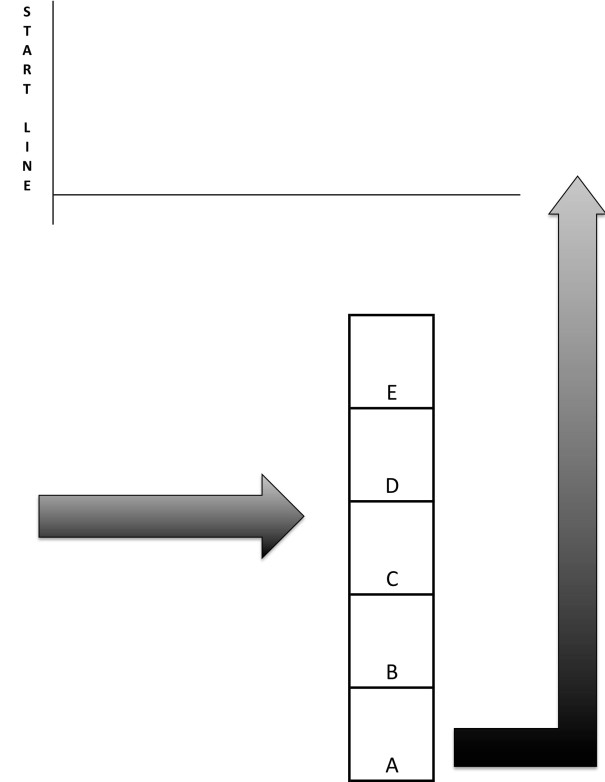 Brooke and I were in Corral E. Being in the last group, we wanted to be close to the front to give some sort of buffer from the famous balloon ladies and sweepers. When I run races with my wife, she gets to pace me. I run these races to have fun running with my wife. So, time is not something I think about. Since Brooke didn’t get to train as much for this race as she would have liked, we were a little concerned with getting swept. However, when we got in the corrals, we didn’t know where the front and back were initially. So, we set up in the middle. I love the waiting time in the corrals because it gives you time to chat with those around you. I’m always interested in hearing the various stories that each runner brings to the races. Brooke and I met a couple of nice ladies before the race. We were enjoying the conversation so much that we didn’t hear the announcement that they were starting the Star Spangled Banner until we heard the person singing it. Oops. I must say, the speakers were not working very well.

So, while the various corrals got going, we continued to stand around and chat with those around us. There were around 10,000 runners out there for this 10K race, I believe. The sad part of being in the last corral for a 10K race is that you get to hear when the winner crosses the finish line BEFORE you even start. Yep, the winner of the race had finished before we even got to start. Talk about fun.

And then, several minutes after the winner finished, it was our turn to start.

There was this DJ playing as we left the parking lot. In the first mile, that’s the only entertainment we came across.

I know this shot is a little blurry, but I was attempting to show the runners coming back from the first turn around. As you can see, this first part of the race course left a lot to be desired. We crossed the first mile marker around 15 minutes into the race and headed towards the next one. As we turned around, we could see all the runners who were at least a mile behind us and the back of the race. We saw the balloon ladies and the vehicles that would presumably pick up the runners/walkers who were going too slow.

Around the 2 mile marker, we came up on the first character stop…Peter Pan and Wendy. Because Brooke was concerned with just finishing in the prescribed amount of time, we didn’t stop in the line to get out pictures taken. Instead, I stopped long enough to get this picture of someone else posing with Peter and Wendy. Also, the mile 2 marker brought us to our first water stop. I’m kind of surprised it took this long for us to get a water stop. The temps were cool enough and I wasn’t pushing myself too hard. So, it didn’t bother me too much. However, I was surprised.

Nothing of note between the mile 2 and mile 3 markers. We just kept going on the highway. 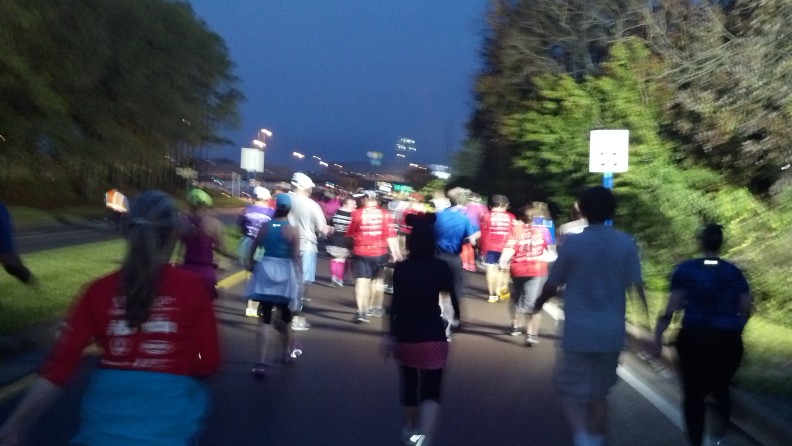 Getting close to EPCOT…

Finally, around 3.5 miles into the race and we got to the backstage area of EPCOT! This perked up my wife big time. We knew the rest of the course would be either in EPCOT or the Boardwalk area. That meant we’d get more things to distract us. My wife struggled to get to this point. So, I was glad to see her reaction at coming to this point of the race. 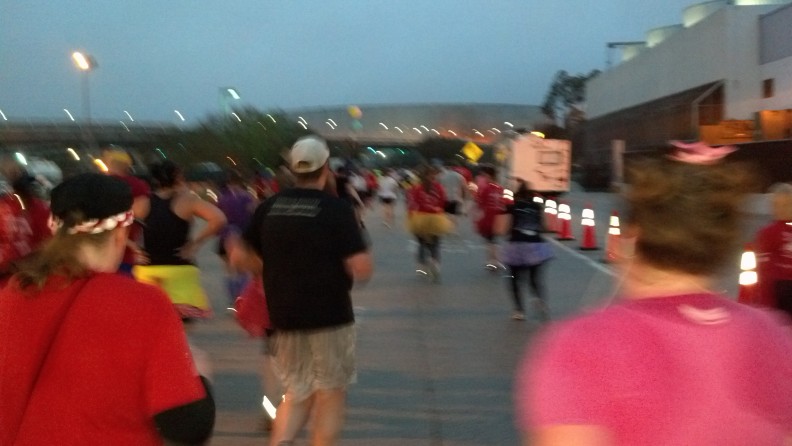 I had never been backstage at any of the Walt Disney World theme parks before. So, I was really excited to be here! 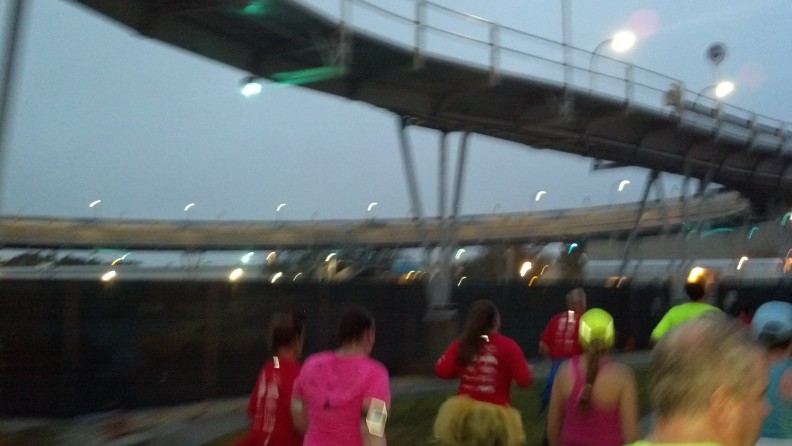 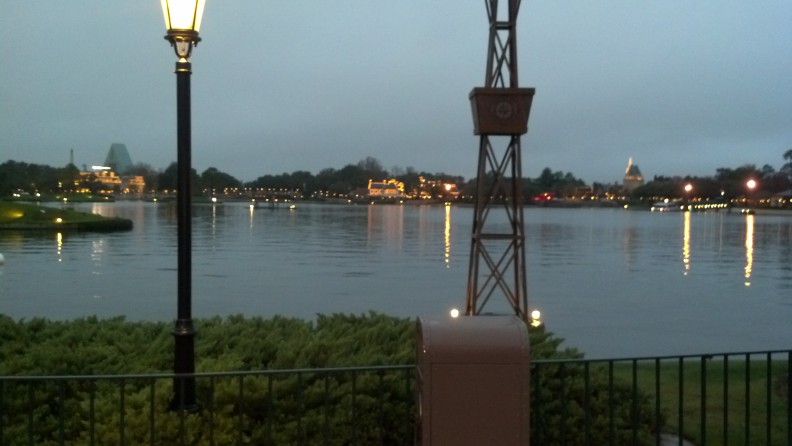 We entered the World Showcase area of EPCOT between Norway and China. I LOVE EPCOT! 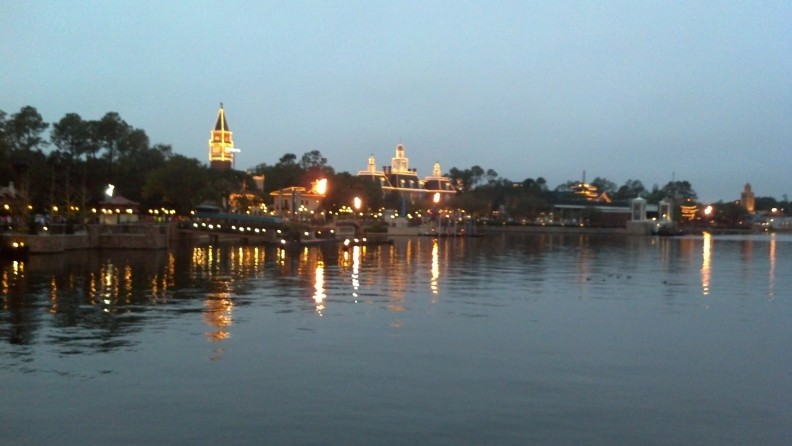 Making our way towards the America Pavillion. 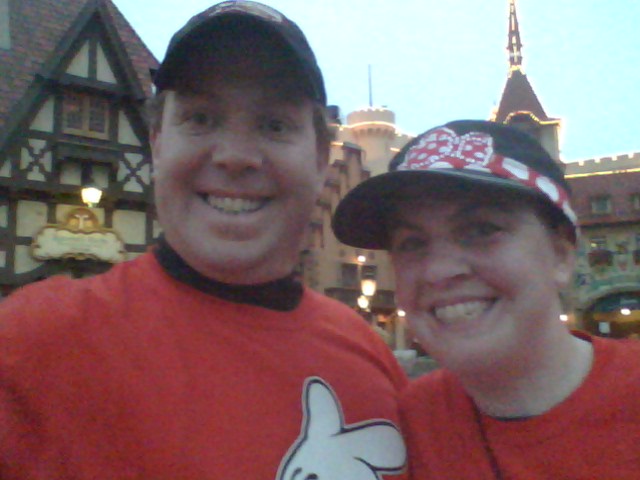 We stopped at the Germany Pavillion for a selfie. I ate there the night before.

The Mile 4 marker was in the America Pavillion! 2.2 miles to go! 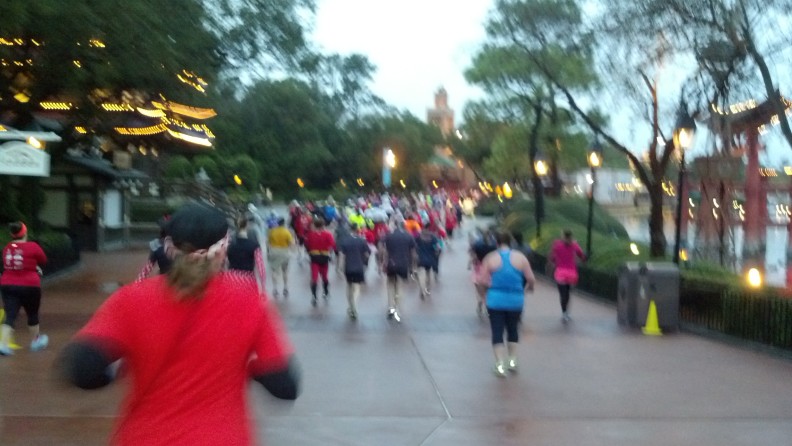 This is one of my favorite spots for a picture of Spaceship Earth!

My one and only character photo from the 10K race. There was only 1 person in line for a picture with Genie. So, I couldn’t resist.

We made it to France!

We went up and over the bridge and out of EPCOT towards the Boardwalk.

As you can see, we’d come back to EPCOT after the Boardwalk at this place as well. Here is where the road was a two-way one. Brooke was happy to know that once we got back here, we’d be close to finishing!

The Boardwalk area was really fun to run around. I love the views of the various resorts in this area. 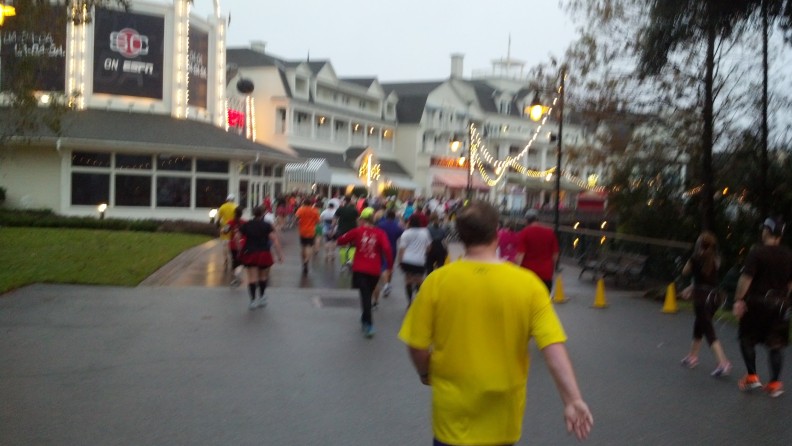 Even though I didn’t get a picture, Goofy was out at the ESPN Grill as we started the official Boardwalk portion.

Because of my marathon costume, I loved this sign! 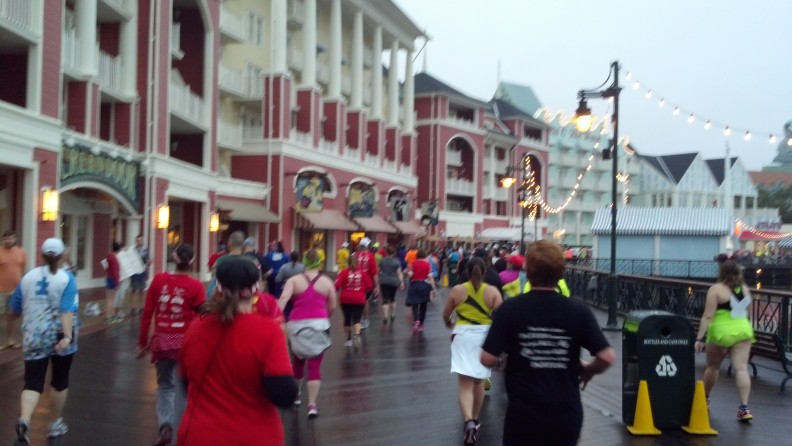 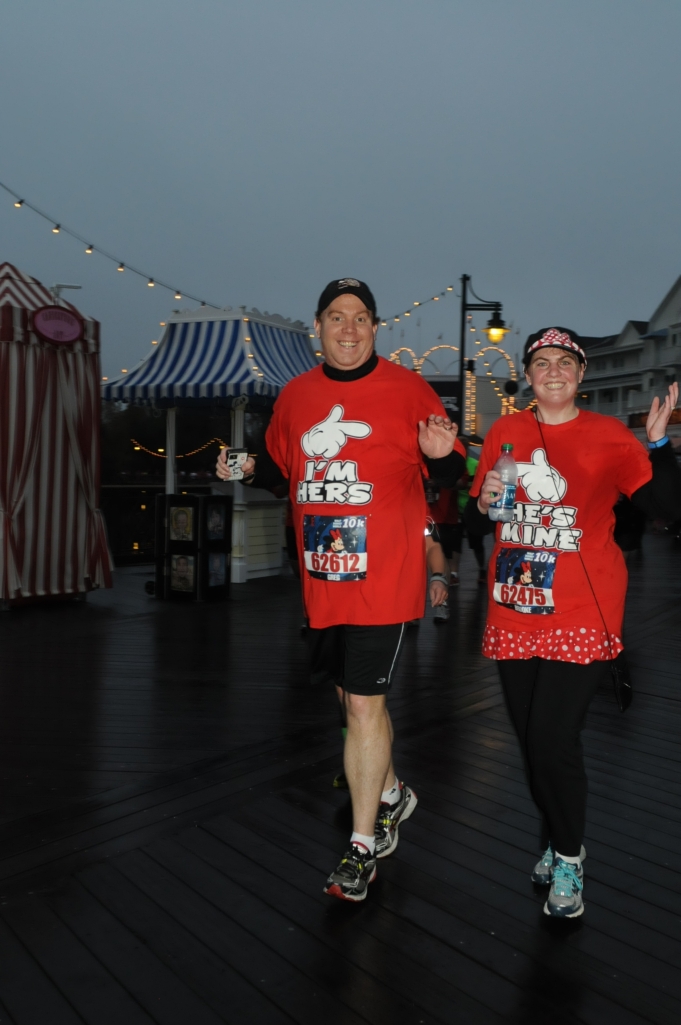 Brooke opted to walk up this little incline. Aren’t the views cool? 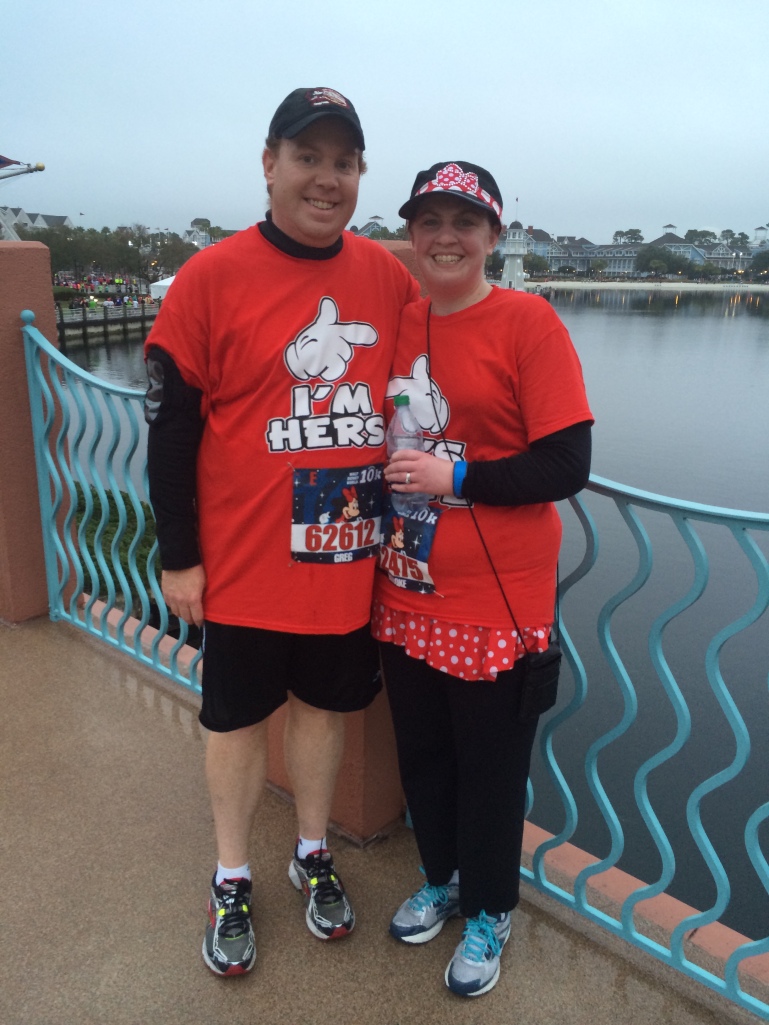 Someone was nice enough to get this picture of us on the bridge. 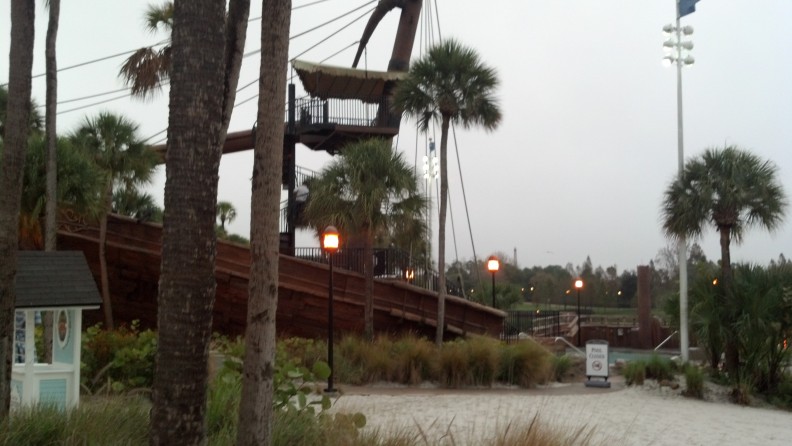 I thought this “sunken ship” was pretty clever as a play area. 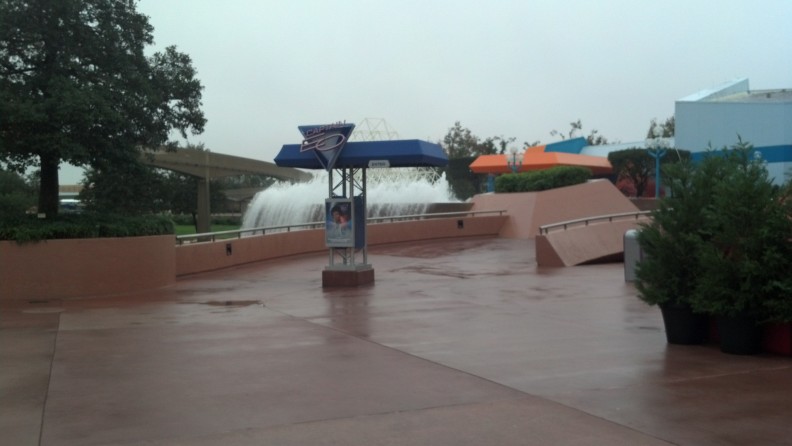 We made our way back to EPCOT to finish the race. Did you know they still have Captain EO at EPCOT? They closed Captain EO at Disneyland earlier in 2013. 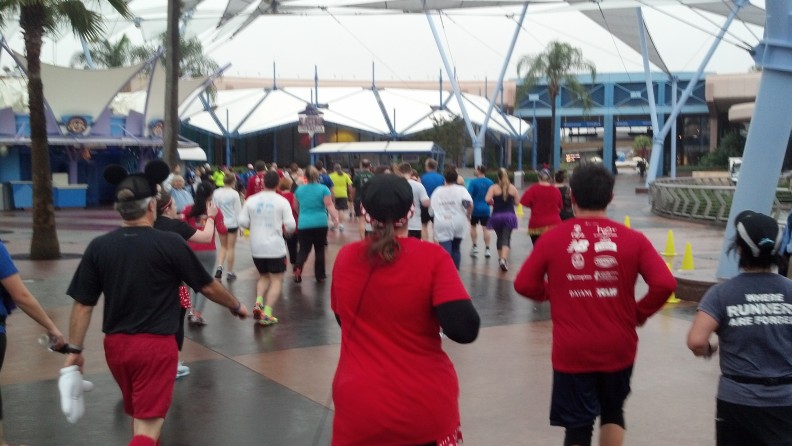 Running by Spaceship Earth means the finish line is oh so close. Brooke was really happy to see this!

Right by the Mile 6 marker Lumiere and Genie! 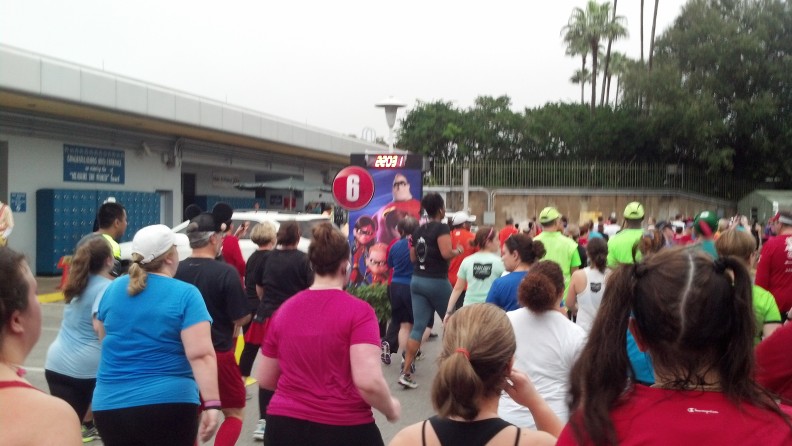 With the finish line in sight, it was time to run for it!

Another 10K in the books! 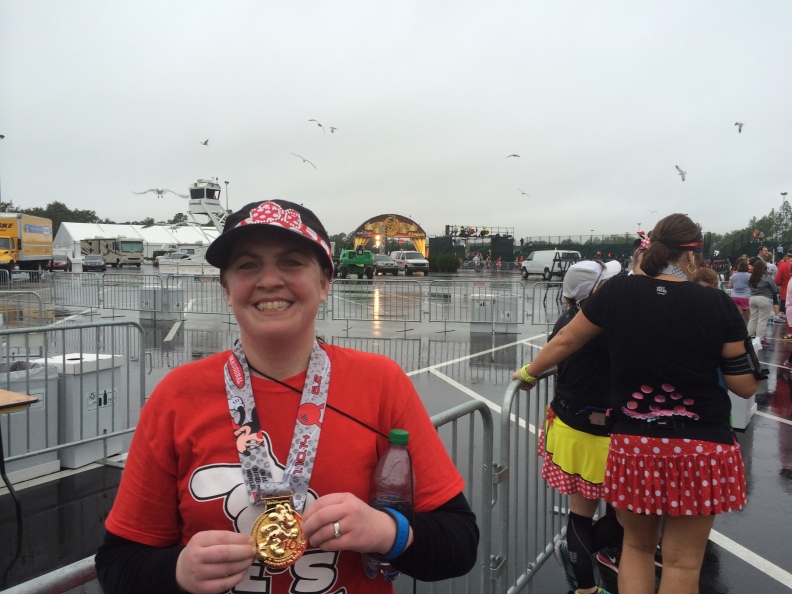 This was Brooke’s marathon. She did amazing in spite of being under trained and I’m so proud of her for finishing. As the person who was by her side for the entire race, I know that it was a battle for her. She never gave up and never said she had to stop. When the race got difficult, she just would talk through various things to keep her going. She came for her Minnie Mouse 10K medal and got exactly that.

After the race, we celebrated with a character breakfast at the Cape May Cafe. Of course, we had to tell Minnie how happy we were to be finishers of her race. She was pretty happy for us as well! 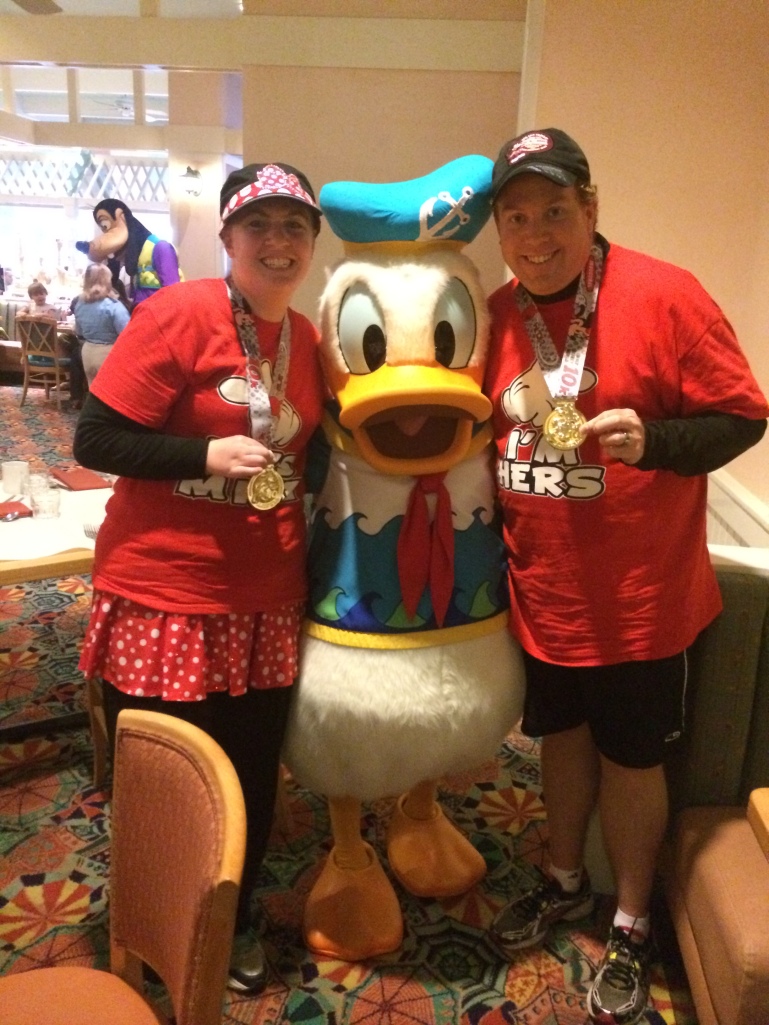 We also got to share our joy with Donald…

I came into this race with high expectations. After all, the Disneyland 10K race was so much fun and I had heard how amazing the Walt Disney World runDisney races were. So many people talked after the Disneyland 10K about lack of water stops. In that race, there were 3 water stops. I think the Walt Disney World 10K race had 4. So, there really wasn’t much of an upgrade from that standpoint. I was disappointed in how this course was designed. It took around 3.5 miles before we got into a theme park. Along that stretch, there was exactly ONE character stop. So, the entertainment for the first half of the race was rather nonexistent. However, I titled this post Ending on a High Note for a reason. The last portion of the race was fun. I really enjoyed running in EPCOT and through the Boardwalk area. It is a shame that they couldn’t have routed this course through EPCOT AND Disney’s Hollywood Studios. In my opinion, THAT would have made the Walt Disney World 10K race better and more fun. If you’re going to have a fun part to a race, however, it’s better to save the best for last. Right? This race started slow and ended on a high note. While I wouldn’t fly out to Orlando just for this race, I would race in it again if I ever make it back for another Walt Disney World Marathon Weekend.