I hope that everyone had a wonderful Christmas Day! Yesterday, I had hoped to find the time for a blog post. However, it just didn’t happen. This year’s Christmas was awesome for me. I even got in a 6 mile run on Christmas Day! It started on Christmas Eve with a loooooooooooon drive up to my parent’s house in the high desert. A visit with my parents means seeing this guy. His name is Romeo.

Brooke and I love getting to see him on our trips to my parents house. He love to see us as well. What’s fun about Romeo is that when he wags his tail, he does so with so much gusto that he shakes his entire back side. It’s pretty funny! The drive to my parents house that should have taken an hour and a half took nearly 3 hours. Gotta love living in Southern California. You can never predict what traffic will be like. This drive is the new record holder for longest time. We had my family’s traditional Christmas Eve dinner…lasagna. Afterwards, we headed out to check out the Christmas lights around my parents. There were some really cool ones. This was the house across from my parents place. Not too bad at all.

This was the view from the back of this area with several houses participating in what appeared to be a coordinated effort.

This is the side view. This is a close up of my favorite house of the night.

Here’s a better shot of the whole thing. Pretty amazing. Right? I think the house next door had the most awesome display…

I saw something online last year that was similar to this. One house all lit up and the next door house with lights fashioned to say “ditto.” To see something like this in person was just plain awesome! Christmas morning, we woke up and had breakfast and got a few pictures. This was the test picture without the wife. After the pictures, we opened our presents….well, the ones we bought for each other. Brooke and I would open up the presents we bought each other later in the day. The present opening gave me some time for the breakfast to digest. At 9:30am, I went out for a 6 mile run around my parents house. Unfortunately for me, my playlist disappeared from my phone. So, I had to go back and recreate the list. Thanks to this blog, where I listed all the songs (in order), it didn’t take too long before I was finally out.

It was a brilliant day for a run. The sun was out, there was a cool enough breeze to make things bearable. The forecast for weather on Christmas was temps in the 70’s for the high desert and 85 in Pasadena. Yes, we had a warm Christmas. It was fun to run with Christmas music in my ears on Christmas day! Running with songs about snow and it being cold outside while looking at scenes like this is kind of awesome! Additionally, there were hardly any cars out and not too many people either. However, with each person I passed, we waved and not only said “Hello!” but “Merry Christmas” as well! Of all the runs I’ve done in my life, this one ranks pretty high. A top 10 run for sure just because of the fun.

Even with the sun out, I was one happy camper to be out and getting in another training run…the first in this taper period.

Hanging with my parents is fun. My dad just doesn’t like to smile for pictures. Brooke tried to get him to smile. It just didn’t work. Oh well. My parents called their dog, Romeo because he loves giving kisses.

Romeo loved the gift Brooke and I gave him! After lunch, we came back to Pasadena to have our own gift exchange. I was a bit of a bad blogger in that I didn’t get any other pictures from Christmas day after leaving my parents house. The traffic coming home was way better than the night before and we were home in an hour and a half. That gave us enough time to have our own gift exchange and do a little picking up the apartment before Brooke’s parents arrived for Christmas dinner.

Among my gifts from my wife were the Despicable Me movies! It’s minions galore!

Brooke also surprised me with this bad boy! I told her about this a few months ago. Can’t wait to try it out! Overall, my wife did well as always with the gift giving. She seemed to like everything I was able to give her as well. One of the things about training for the Walt Disney World Marathon that I have disliked is how much time it took away from Christmas shopping. I’m not a morning kind of runner. So, 2 or 3 nights of the week, I was running when I could have been out shopping. Then, on the nights when I wasn’t running, there were gatherings of friends to go to or I was just too tired to go anywhere. Even when I did manage to get out and shop, I was pretty tired. That made the gift buying this year less enjoyable. I normally love the imagining the looks on people’s faces when they open the gifts I buy. This year, I felt so uninspired. If I never go out to Walt Disney World for Marathon Weekend again, it will be because of the sacrifices I’ve had to make in the holiday season more than anything that is the reason.

Around 5:30pm, Brooke’s family came over and we spent the rest of the evening with them. We had tamales’ that are home-made by my father in law’s secretary (whose from Mexico originally). They were amazing! We get to have them every year. Although, it isn’t always on Christmas day. We also had our gift exchange with Brooke’s family in the evening. For me, the funnest part of the exchange is hearing the stories of how and why the particular gifts were purchased. My in-laws are fantastic story tellers. They are also pretty clever with the gifts they choose to buy. For example, my father in law mentioned something about how we shouldn’t get coal because it’s very messy. Well, one of the sisters in law bought him some sort of coffee called coal. Also, my wife mentioned on her list to her family that they could get whatever their hearts desired. So, some of the stocking stuffers had a heart theme to them. Two items I received were perfect for this new runner… 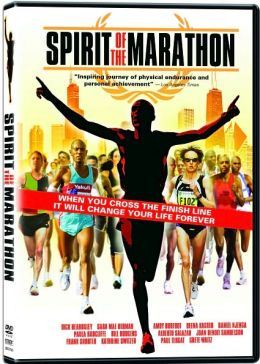 I got Spirit of the Marathon on DVD! Can you guess what I will be watching on that 5 hour plane flight from LAX to Orlando? I LOVE this movie and have watched it 3 or 4 times already this year on Netflix. I put it on my Christmas list because you just never know when Netflix will stop offering it for streaming. This way, I will have it and can watch it on the plane flight! Yay!

I also got White Pro Compression socks! I’ve read about these socks all year and now have a pair of my own! Yet another gift that will get used around marathon weekend (and beyond)!

In closing this blog post about Christmas 2013, I hope you enjoy the song above as it’s one of my favorite Christmas songs. No offense to Mr. Chapman (whose music I LOVE!), but when I went to Azusa Pacific University, the University Choir and Orchestra recorded a version of this song that I think is a little better. However, the lyrics are pretty spectacular and Steven Curtis Chapman’s recording still captures that. As we start this last few days of the year, I want to send out my best wishes to all of you for a fantastic 2014.