Happy day before Christmas…or Christmas eve…or Merry Christmas. Depending on when you read this, one of the three will work. As I mentioned last week, the day after my long run, this past Sunday, I went to the Disneyland Resort to see how being in a theme park would be on the day after a long run. I ended up going to Disneyland/DCA with my two sister in-laws because my wife was not feeling good in the morning. She said it was okay for me to go without her. So, we were off for a fun-filled day at Disney’s original Magic Kingdom Park!

We arrived at Disneyland at 10:30am. Not to brag or rub in our fantastic weather to those living in parts of the world where it’s really cold. However, Sunday featured perfect weather to be in a theme park. The highs were in the low to mid 70’s. Absolutely perfect! First attraction of the day? The Haunted Mansion with the Nightmare Before Christmas overlay. 2013 is the 13th year of this overlay and they had some fun additions. Oogie Boogie left us some fun treats. Check the following ride through video to see this year’s version of the ride.  I really liked how they ended the “stretching room” part. The animated Jack Skellington was a cool addition. In previous years they just had his head show up. Also, the gingerbread house was huge this year.

From there, we went to my favorite Disneyland attraction….

Then it was on to the Jingle Jungle Cruise. This is a new addition to the holiday lineup and I was eager to check it out… It said the line was 40 minutes when we arrived. It didn’t look that long. Then, we saw the line go upstairs. I’ve never been there before. So, I was snapping lots of pictures. Here are some of fun pictures I got from above…

One boat is leaving…

Another arriving. As for the differences between this and the regular Jungle Cruise, there wasn’t a whole lot different. They have dressed up the queue line with some festive holiday decorations. During the ride, this was the only difference…

It may be hard to see, but the gorilla at the back of the picture has some Christmas looking presents.

Then, there are a few changes to the script the Jungle Cruise skippers are giving. Here, we’re told that this guy is holding a special Christmas sale…3 heads for one of yours. After the Jingle Jungle Cruise, we headed over towards Space Mountain. On the way, I had to get the picture of Sleeping Beauty’s Castle with the fake snow. After all, in the weather we’re having, the snow would have easily melted. 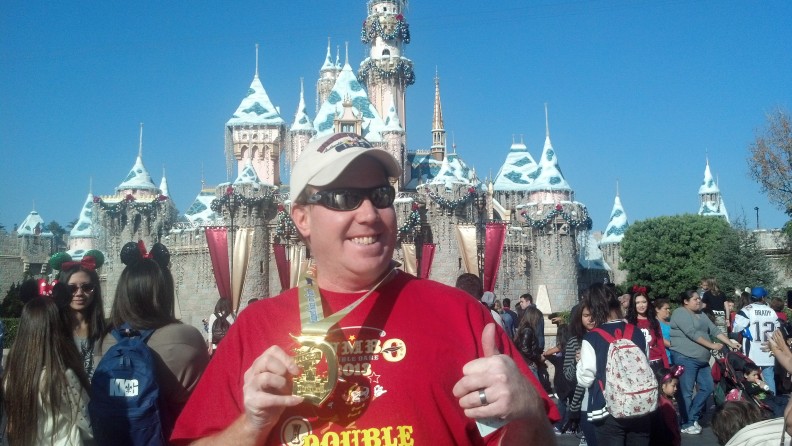 After the Disneyland Half Marathon Weekend, I wasn’t able to go to the parks for a picture with my finisher’s medal and the castle in the background. So, I made up for that on this visit. I kind of like it better. After all, those other Disneyland Half Marathon finishers may have a picture with their medal and the castle, but they don’t have all the fancy holiday stuff on the castle. Plus, this gave me time to practice poses for after the Walt Disney World Marathon. I liked this one the best.

One place I haven’t had the chance to visit was the Iron Man exhibit at Innoventions. So, I made sure to rectify that on this trip as well. Barney Stinson isn’t the only one who wants people to “Suit Up!”

I loved seeing the hall of Iron Man Suits… This November, they added a meet and greet with Thor. So, off to Asgard I went… Funny story. As we were in the room ready to meet Thor, there was a lady, probably in her 50’s, who was positively giddy at meeting Thor. It reminded me of how amazing Disney is at creating the magic. I mean this lady was acting like a kid around Thor. What a great company I get to work for!

After meeting Thor, it was off to Disney California Adventure. I LOVE how they decorate Cars Land (AKA Radiator Springs)! Unfortunately for us, the wait was over 2 hours and the single rider line was shut down. None of us wanted to wait that long for 1 ride. Also, the fastpasses were sold out (which I knew before we entered Disneyland). Since this was one sister in law’s first visit ever to Disney California Adventure, we decided to skip the racers for the time being and just keep checking the wait times. That way, she could see more of the park.

We saw that Toy Story Mania had around a 40 minute wait time. This is a pretty typical wait and not too long. So, we made our way over. I was super happy to see that Mr. Potato Head was working! The last time I came to DCA, he wasn’t.

We got to moving past him. So, I had to cut the second video a little short. Mr. Potato Head is just one way Disney makes those wait times tolerable. I also noticed some Etch A Sketches in line. Never did find out where they came from. However, since there were three of us, I ended up in the side of the ride vehicle by myself. I dominated… That Player 1 never stood a chance! I actually also had the high score of all in my vehicle.

From Toy Story Mania, we made our way around the Boardwalk area and found this fun celebration that is new to the Disney parks. It’s called Viva Navidad. They had the Three Caballeros there to celebrate.

A little later, Mickey and Minnie came out to join in the fun… Both Mickey and Minnie went by very fast. So, I don’t have a good picture of Mickey before he joined the Three Caballeros on stage.

As you can see, it was very festive and fun. After that rousing Feliz Navidad, the celebration came to a close…

This was my best picture of Donald for the whole performance.

And finally, a good picture of Mickey!

From Viva Navidad, we made our way to Ariel’s Undersea Adventure. This is my wife’s favorite attraction at Disney California Adventure. So, I knew that my sister-in-law who had never been to DCA needed to experience this attraction.

Truth be told, I like this attraction as well. It’s one of the better family friendly dark rides. If there were only one or two more scenes, it would have been a perfect attraction. Oh well, it’s still fun. Great music and a happy ending.

From there, we headed to the Art of Animation building to see if we could get in and learn to draw a Disney Character. Unfortunately, we were the first people who didn’t make it in to learn how to draw Olaf from Frozen. That would have been cool! Oh well. Turtle Talk with Crush was around 20 minutes away from starting and we had to make it back to Ariel’s Grotto for dinner soon. So, we went to the Monster’s Inc. Mike and Sulley to the Rescue. There was even a Santa Roz at the end. I had no idea they did anything special for the holidays at this attraction. From the ride to the university. I never got around to checking out the Monster’s University set up at DCA this summer. So, I was glad to see it was still up and had to go to school. Alas, they were closed for Christmas Break.

Santa sighting by the Hyperion Theatre! On our way to Ariel’s Grotto we came across this!

We also randomly stumbles across the tree lighting ceremony at DCA. Mickey Mouse and his pal Pluto were on hand to sing a few Christmas carols and light the tree!

Disney sure gets tall trees!

Right by Ariel’s Grotto, you get some great views of Paradise Bay. With the sun setting, the lights were just starting to come on. This is my favorite picture I got of the bay before dinner.

Dinner was amazing! Then, came the desert. WOW! Too much good stuff. We were at Ariel’s Grotto for around 2 hours because afterwards we needed some time to digest the food we ate. In case you’re wondering, we didn’t even finish all of the deserts.

Just down the way from Ariel’s Grotto, there was another tree! I should mention that Ariel’s Grotto had its own tree. Unfortunately, I didn’t get any good pictures of that tree. However, it was decorated with things you’ve found under the sea! In this tree, I spotted some hidden Mickey’s.. Since we were still a little full from dinner, we took a walk back to Cars Land to see it all lit up at night.

I love all the neon signs! Flo’s does not disappoint.

Look! A gingerbread version of the Cozy Cones Motel! The details in Cars Land make it so much fun to wander around! Then, it was time for World of Color: Winter Dreams. I LOVE THIS SHOW! I love it more than the original World of Color show. I think that adding Olaf as an MC to move the show along makes it flow so much better than the regular World of Color. Now that I’ve seen Frozen, the scenes that make reference to that movie make a lot more sense and are far more meaningful to me.

My favorite sequence of the entire show, however, is the Toy Story Nutcracker. Who doesn’t love the green aliens from the Toy Story movies? What I didn’t get a good picture of is Rex in a tutu. He was hilarious. He kept knocking the aliens down and would try to pick them up while doing his choreography. It was super funny.

Being the Buzz Lightyear fan I am, how could I not love the scene of him dancing with Jessie.

The show is an absolute must see if you’re ever at Disneyland for the holidays. I’m pretty sure that they’ll go back to the regular World of Color show in January, once the holidays are over with at the Disney parks. It seems like this show has been very well received. So, hopefully, they’ll bring it back next year. With the World of Color: Winter Dreams ending, we said goodby to the parks and headed home. I love Disneyland at Christmastime! This trip showed me that I can do theme parks quite well a day after such a long run. So, I think I’ll be fine with the plan of going to the Magic Kingdom the day after the Walt Disney World Marathon. I’ve now been to Universal Studios Hollywood, Disneyland, and Disney California Adventure since December 15th. Between December 15th and January 15th, I’m on a quest to be in all of the Disney and Universal theme parks. So far, I’ve done the California ones. In a few short weeks, I’ll be hitting up the Disney and Universal theme parks in Florida! Two weeks from today, Brooke and I will be flying off to Orlando to begin our Walt Disney World Marathon trip! The marathon is now less than 3 weeks away! Yikes! Before all of that, however, tomorrow is Christmas. So, I want to leave you with a link to the World of Color: Winter Dreams show. Enjoy!