Brooke and I are both big Disney fans. I’ve lost count of the amount of Disneyland visits we’ve had over the years. In that time, we’ve had a lot of fun memories. I’ve already shared about our Disneyland engagement. Here are a few photos representing other fun times we’ve had that had something to do with Disney.

First up…my 33rd birthday at Club 33. In 2006, a few months after we met for the first time, I had my 33rd birthday. Brooke had a friend whose family had a Club 33 membership. Knowing what a huge fan of Disney and Disneyland I was (as well as knowing that I’d never been to this exclusive place), she set out to see if she could get us in on my 33rd birthday. As you can see, she was successful. So, on my 33rd Birthday, I celebrated at Club 33. The restaurant is everything people make it out to be online. The restaurant was elegant, the food was amazing, and the service was the best. I had no complaints about my only visit to Club 33. The funny story of the experience happened as we were set to go back into the theme park. Brooke was using the restroom and I was waiting for her. Another guy and his son were waiting for his wife as well. The man saw my birthday button and asked if my birthday was on that day. I told him that it was and how ironic that I was celebrating my 33rd birthday at Club 33. His son looked up at me with this really serious look. Then, he asked if I was going to celebrate my birthday at Club 34 the next year. The man and myself laughed. His son had picked up on the irony but had no clue that there was no Club 34. After getting what will probably be my only dining experience at Club 33, I can say that you should not turn down the opportunity to experience this wonderful restaurant if given the chance to dine there.

In the summer of 2008, I was still in my first year of working for the Walt Disney Company. It was the last year that they had a company picnic. (Of course, they might have another one in the future. However, they haven’t had a company picnic since this one.) It was a really hot day at the Santa Anita Racetrack. There were lots of fun activities. If we had kids, I think the picnic would have been even more fun. There were lots of games to play. However, a lot of those games were geared towards the little ones. So, our appearance at the picnic was brief. However, we did get this picture with Mickey and Minnie. I thought this picture was sort of appropriate considering I’m in training for Mickey’s race (WDW Marathon) and Brooke will be running the new Minnie themed race (WDW 10K) this coming January. Of course, if you had told me back then I’d be running in a marathon, I would have laughed. 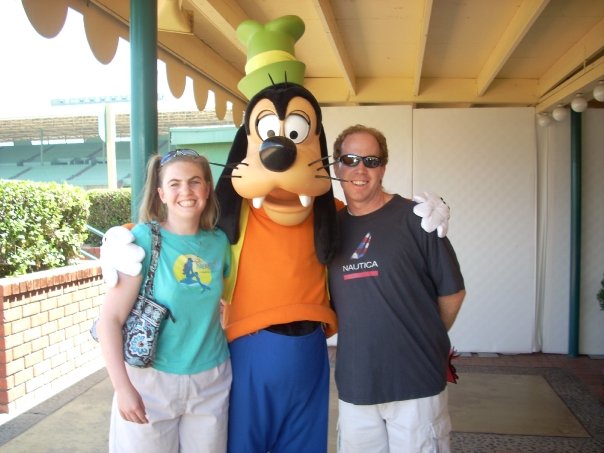 Nope. Neither of us are doing the Goofy’s Race and a Half challenge. However, we did get to meet Goofy at the picnic as well.

Also, in the summer of 2008, Toy Story Midway Mania opened at Disney’s California Adventure. One of my bosses got us invited to the Walt Disney Imagineering preview day for the new attraction. It was the least amount of money I’ve ever spent at a Disney theme park. We had our admission comped, parking was free, and they even had lunch for us at the Big Thunder Barbeque. This is one of the fun pictures we got with some of the Toy Story characters who were also there. It was such a fun day. We got to ride Toy Story Mania 4 times in a row with a maximum wait of 5 minutes. We knew that we’d never experience such short lines ever again. The only thing that I paid for that day was our traditional chocolate croissant at the end of the day as we waited for the fireworks on Main Street U.S.A. I think I paid less than $20 for the entire day. Never gonna happen again.

What are some of your favorite Disney memories? Do you have a Disney side?