From the summers of 1990 – 1993, I travelled with a music ministry called the Continental Singers. They were 4 life changing summers. The above video was from the 1992 Continental Singers 25th Anniversary Grand Finale Concert at McNichols Arena in Denver, Colorado. This was one of the most memorable concerts I’ve every had the privilege of performing. Wayne Watson, the guy singer, was a former Continental Singers director and Sandi Patty was a huge supporter of this ministry.

This song was one we learned in the bus ride to the arena in the morning. I like the video because it uses all of the Continental Singers groups that toured that summer. Plus, I like this clip because I’m in it. As they are panning across the choirs, right at the 2 minute mark, I’m in the shot. Of course, if you don’t know where to look, you’d probably not even see me. However, I can see me.

And here is the Tour S brass section. I’m the trumpet player on the outside. 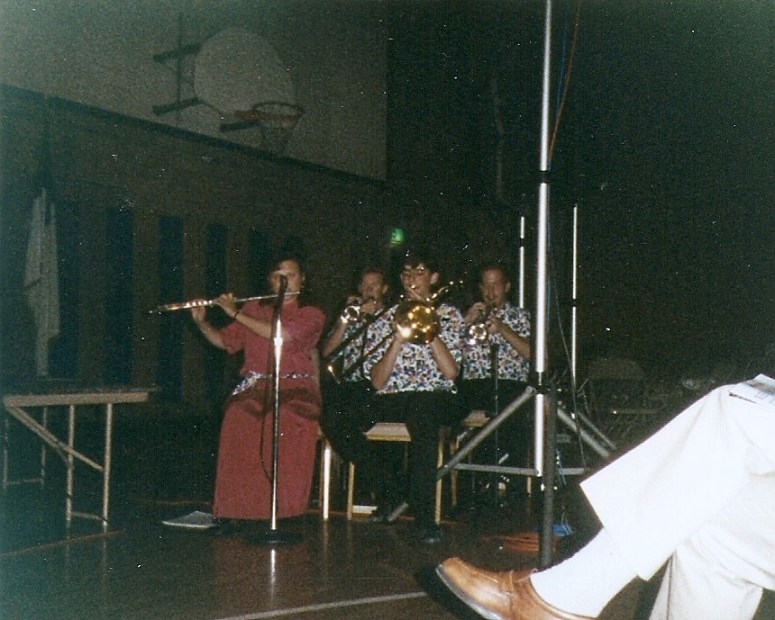 Tour S 1992 went all over the Southwestern United States and to the South Pacific (Australia, New Zealand and Fiji). Over the course of the summer, we performed 85 concerts with most weeks consisting of 7 or 8 concerts. Yes, we were a hard-working bunch. However, we found ways to have fun as well. As a matter of fact, our plans in Australia changed last-minute and we had a couple of concert dates cancel. So, we had our flight to Australia pushed back a couple of days and got to hang out at Disneyland, where Splash Mountain was fairly new and Fantasmic had just opened.

The four summers with the Continental Singers changed my life in every way imaginable. I learned so much about how to live with others (sharing a bus with 40 strangers per summer would change anyone in that way), what it means to be a good friend, what it means to have a relationship with Jesus, and how to be a better musician. In the summer of 1992, I became a solid lead trumpet player and made some great friends whom I’m in contact with even now, more than 20 years later.

Thanks for taking this trip down memory lane with me.