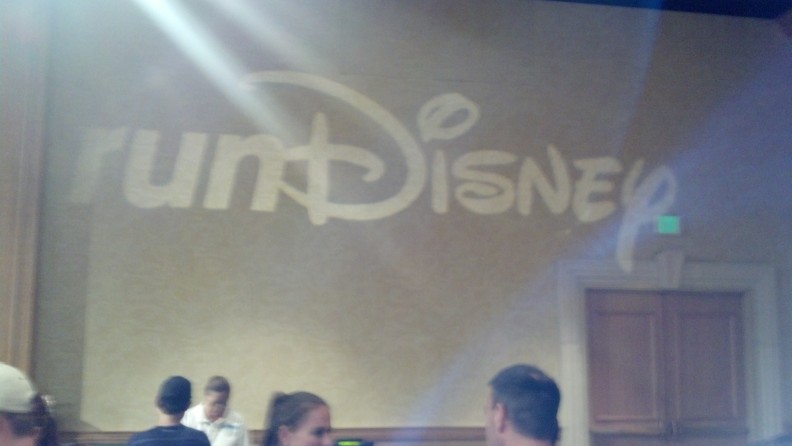 Every runDisney event begins with a health expo. So, on Friday, August 30th, my Disneyland Half Marathon Weekend began. I woke up at 6:30am and was out the door around 7:45am to head down to Anaheim. The expo opened at 10am, but with Southern California traffic, you never know how long it will take. Since I wanted to make sure to get a few items in the runDisney store, I didn’t take any chances. Fortunately, it didn’t take too long to get there. I realized once I got closer, that I needed a quick stop at Target first. So, since I had the time, I decided to do so. Once I was done at Target, I checked Twitter and learned that the line for the Expo had already formed. So, I high tailed it to the Disneyland Resort. I wasn’t too sure where to park and didn’t find anything on the runDisney instructions that helped. So, I made the decision to just park in Downtown Disney.

I arrived at Downtown Disney at 9:11am. I remember this because I knew how long I would have free parking and thought about this many times during the Expo. On the way to the line, I took a few photos of the finish line…

I made it to the line for the Expo at 9:15am and was a little surprised how long it already was. The sun was out and it was already starting to warm up. All of us in line couldn’t wait until we got indoors. Once we did get indoors, it was absolute madness. I’ve never seen anything like it. My first stop was here…

It was a crazy scene. So many people had the same idea as myself. The agenda seemed to be grab, grab, grab. Then, you could figure out what you actually wanted and what you could afford. Over the course of the DL Half Weekend, I saw several of the bloggers whom I follow. Unfortunately, I didn’t get to actually meet most I saw. Why? Because, I’d see them and a second or two later, it dawned on me whom I saw. By then, they were out of sight. One example of this happened while I was trying to figure out what, of the items I had grabbed, I wanted to purchase. I saw Bobby and Heather Montgomery. Heather writes Through Heather’s Looking Glass. Bobby asked me where I found one of the shirts I had and I pointed him to where I found it. Then, two seconds later, it registered that I had just talked to Bobby and watched him and Heather wander off into the crowd. By then, they were gone. At the Expo, this would happen a lot. (It should be noted that I did get meet a few of the bloggers whom I follow later in the weekend which was super cool!)

Once I figured out what I thought I was going to purchase, I began the long journey to the back of the line. What was insane to me is that the line ran all the way to the other side of the exhibit hall. In line, I met a nice couple from Tennessee who were in the same boat as myself. I had to laugh when the wife called herself an “unofficial” Dumbo Double Dare runner. That’s what I’ve been calling myself. We were unofficial because we didn’t get registered early enough to be official. Yet, we were going to be running in the 10K and the Half Marathon, just like all those official types. One of the dilemmas I had while deciding what to purchase was if I should get any of the Dumbo merch. I ended up deciding to buy the “I Did It” Dumbo shirt. After all, I was going to finish the same 19.3 miles as an official Dumbo runner. So, why not? Also, I really disliked the “I Did It” shirt for the Disneyland Half Marathon. I also bought another Dumbo shirt because it was too cool to pass up. Here’s some of the merch that I ended up with…

One of the guys who was a few people behind me thought that there should be a shirt that said “I survived the Expo” on it. All of us around him laughed and totally agreed. When all was said and done, I got to the front of the line to make my purchases around 12:15pm and I still had to get the race bibs for my wife and myself. Yikes!

So, I hightailed it out of the Expo and made my way to packet pick up. The line for the 10K wasn’t too bad. Funny thing is that the bib numbers for my wife and myself were in lines that were right next to each other. So, I stood in line for her bib first because it was the longest line. By the time I got to the front, the other line was empty. So, I was able to pick up both bibs rather easily. 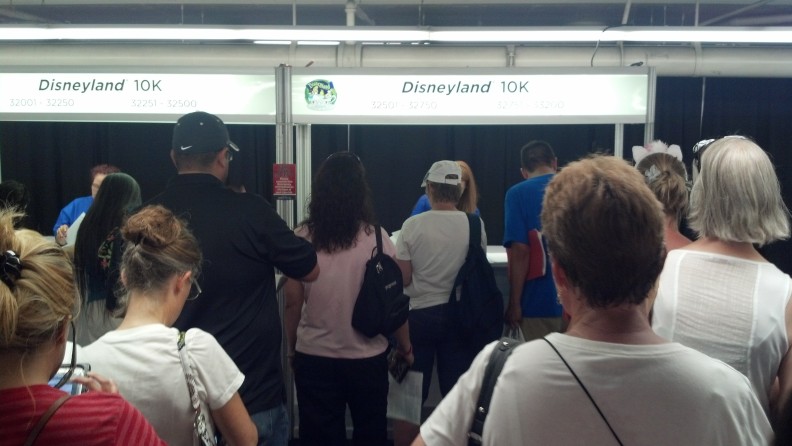 Then, I headed over to the Half Marathon line to get my bib for part two of the Dumbo Double Dare.

From there, it was back up to the line to get into the Expo and waited to get to where the race shirts were. That part didn’t take too long. However, the amount of people in the exhibit hall still felt a bit overwhelming. I picked up our race shirts easy enough. The one thing that we were reminded over and over again about was that they were including a magnet promoting the 3-D release of The Little Mermaid in the bag with our race shirts. So, we had to keep our bibs away from the shirt bags.

Then, I headed through the hall to see what exhibit booths were around. I decided to check out the runDisney booth first. After seeing so many race recaps of runDisney races that had pics of the runDisney medals, I wanted some pics of my own. Sometimes, I wish I lived closer to Florida so I could run in more of the runDisney races. After all, look at these awesome medals…

I even got to meet Jeff Galloway! (sorry the picture is a little blurry) 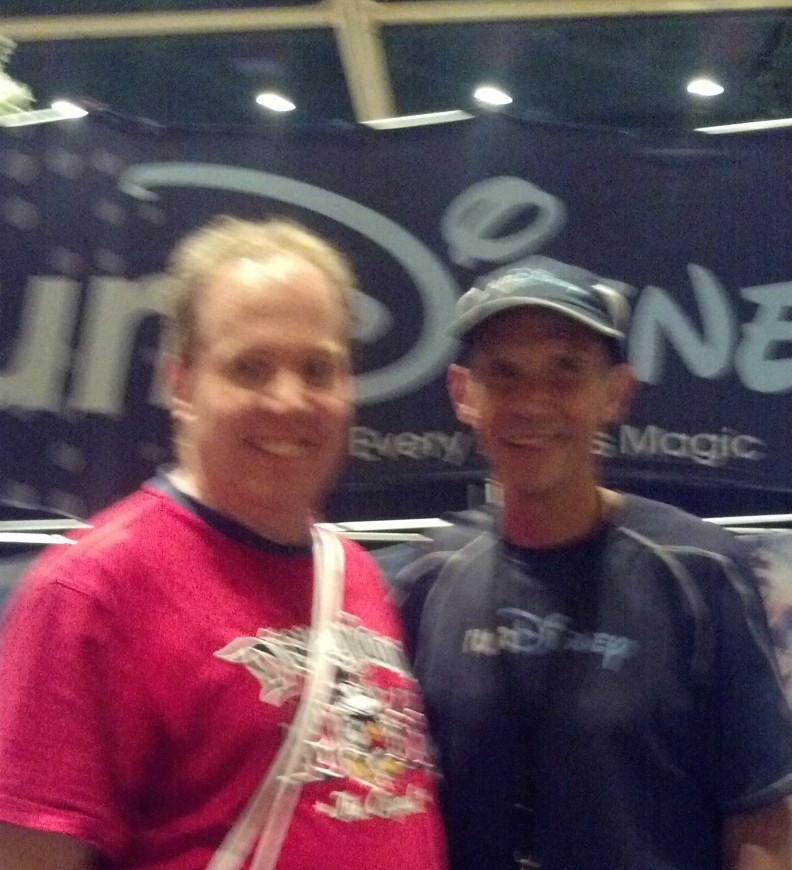 After the runDisney booth, I wanted to find the booth I thought was going to be there for the Rock N Roll Los Angeles Half Marathon because it will be my next half marathon. However, the Expo was too overcrowded, I was ready to call it quits after visiting the booth for the Beach City Races (Surf City Marathon, OC Marathon, Long Beach Marathon).  However, I heard the announcement that Sean Astin was getting ready to speak. So, I headed on over to the stage to watch.

After his presentation, it was time for lunch at the Earl of Sandwich in Downtown Disney. By this time, I was hungry and I was way over my free parking time at the Downtown Disney parking lot. So, the Earl of Sandwich seemed like a good place to go. This was my first visit and I must say that my sandwich was excellent! I even got to chat a bit with another runDisney blogger named Linzie Starr who writes See Sharp Run! (By the way, on his blog, he has better pics of the upcoming runDisney medals. So, check out his blog for that.) The guy next to me in line was someone who had completed 18 of the 20 Walt Disney World Marathons! He was a great person to talk to while in line.

After lunch, it was time for me to head over to the Red Lion Hotel to get my wife and I checked in. Even though I was a little less than an hour away from check in time, I was hoping I could get in early…no such luck. So, I waited in the wonderfully air-conditioned lobby for the 3pm check in time. My wife and I ended up with a room on the top floor with a theme park view. Isn’t this view amazing??? 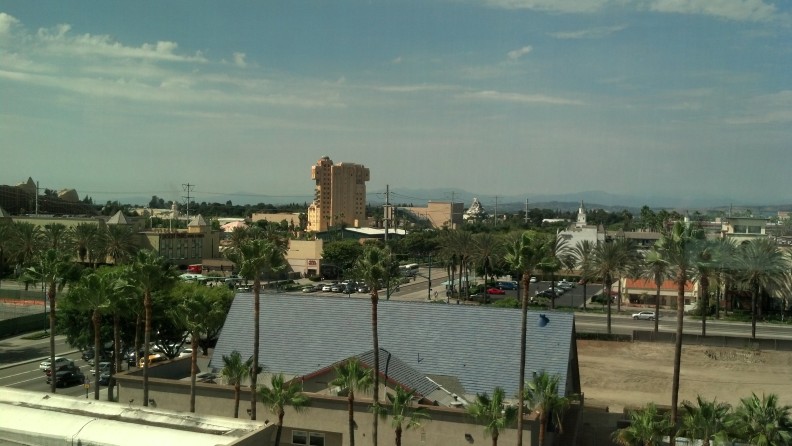 I couldn’t spend too much time at the hotel because I’d get to brave the Los Angeles rush hour(s) traffic back to Pasadena to pick up my wife. She wasn’t able to get the day off from work. We got back to the hotel in time to get unpacked and end our day with watching the Disneyland fireworks from our room.

It was an amazingly chaotic and hot day. However, it all turned out good. Nothing like watching the Disneyland fireworks to end your day! We had to turn in early because early the next morning, we’d be running in the Inaugural Disneyland 10K race.