This past weekend, not only did I get to repeat one of my 5K’s from last year, but I got a preview of my upcoming Disneyland Half Marathon as I ran on the field at Angels Stadium (Go Halos!). For this race, the run through the stadium field came in mile 3. On September 1st, it will be more like mile 10 or 11. Yes, I did think about this as I ran.

Getting back to the Angels 5K…After waking up, there was a little change of plans. When my wife woke up, she was in no condition to run a 5K race. She tried to get ready and hoped that as she went along, she would feel better. However, by 5:15, it was clear that she should sit this one out. Of course, that meant a change of strategy for myself going into this 5K. When we signed up, I was just going to sit back and let Brooke dictate the pace so we’d finish another 5K together. With her not being there, I shifted the focus of this race to one that would test where I was in my journey towards building a better running base.

I arrived at Angels Stadium around 6:15am, 45 minutes before the start. With this run being on a Saturday, I was unable to get there the day before to pick up my race packet early. So, I had to get my race packet…pin my race bib on….

and put my timing chip on my shoe…

All of this needed to be done before 7am. So, I was a little more frazzled than usual. However, it did get it all done with plenty of time to wander around before they lined us up. One cool thing about the pre-race was seeing Roger Lodge getting us ready to run. For those of you who don’t know, Roger Lodge hosts a morning show on the Angels radio station. He also used to do the sports report for the morning news show I watch every weekday morning.

Once he asked us to head to the starting line, I was ready to go!

There was a pretty good crowd for this fun race. I think the total was somewhere over 5,000 runners.

There was about a 5 minute delay in the start. Considering the delay was caused by the Anaheim Police Department, it wasn’t too bad. The girl who sang the national anthem to start things off was pretty good. Then, Roger Lodge took over and got us started.

The thing I love about this course is that it is pretty flat. The goal I came up with on the drive down to the stadium was to see if I could maintain the 4/1 run/walk ratio I’d been doing on the treadmill. It started off pretty good. The first interval worked out perfectly. I felt good and like I could do this the rest of the race. However, midway into the second run interval, I lost mental focus and stopped running after 2 1/2 minutes. After a one minute walk break, I ran the next two minutes. That was followed by a 30 walk break and I ran once I saw that 1 mile marker. The first mile took just under 11 minutes. It wasn’t an awful start. However, it wasn’t what I wanted either.

The second mile was kind of all over the place. It was hard for me to get over blowing the 4/1 run/walk ratio. However, I was able to finish several sets of 2/1 run/walk ratios throughout this mile. Although, a couple of times, I did have to walk more than a minute once or twice. The uncomfortable part to me was the mental battle. I was battling the disappointment of missing the mark of the 4/1 interval and trying to find some interval that I could be more consistent with. The second mile took just over 12 minutes. Considering the battle, conceding one minute from the previous mile wasn’t too bad. I really wanted pick up the pace for the next mile.

At the start of the third mile, we passed the Honda Center (home to the Anaheim Ducks). I will run past this place on the Disneyland Half Marathon as well.

After running by the Honda Center, we turned down a road that leads into the Anaheim Stadium parking lot. Almost home. In this mile, I was going pretty well. The first half of mile 3, I finished in just under 5 minutes! Could I finish the third mile in 10 minutes? That’s what I was on pace for. Then, I saw this. 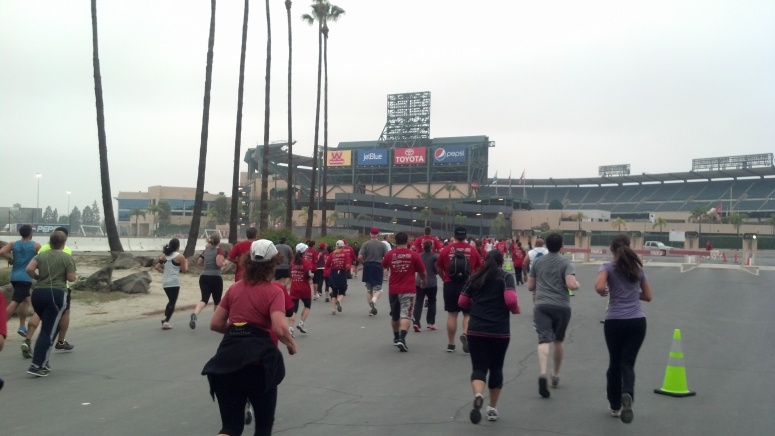 Once we got in the stadium, all thoughts of good time went out the window. I was seriously giddy and decided I wanted to take lots of pictures from the field instead. Once I started down the tunnel, I started thinking about the Disneyland Half Marathon. I’m sure that I’ll be more tired when I get there next. But, I wanted pics to help with motivating me as I prepare for my next trip into Angels Stadium. 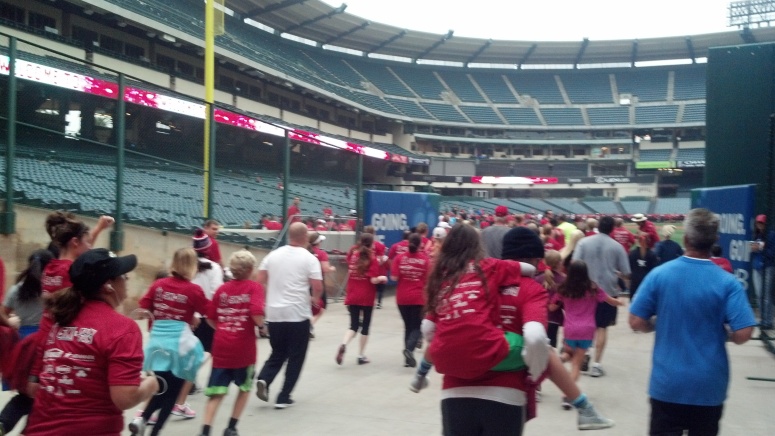 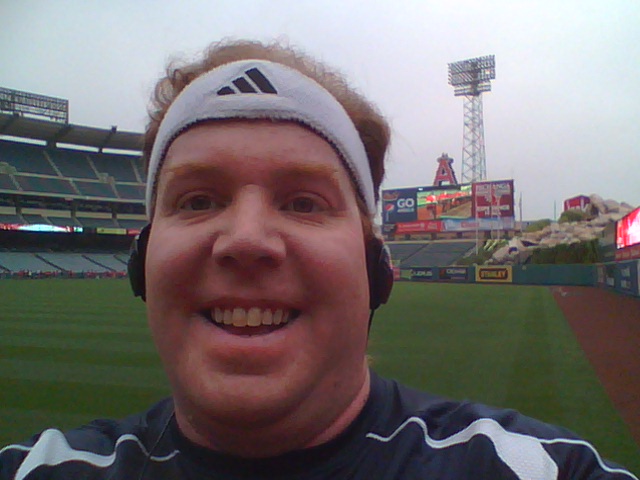 When I got to the visiting team’s dugout, I saw lots of people going in for pictures. So, I had to decide if I would do the same. Of course, making this decision took time out of my finishing time. However, I couldn’t resist. 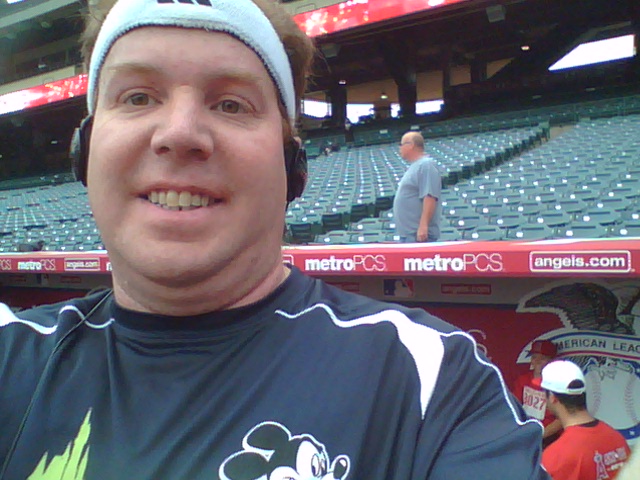 Then, I had to go in the dugout as well for my favorite picture of this race.

As an Angels fan, it was very cool to be on the field behind home plate! 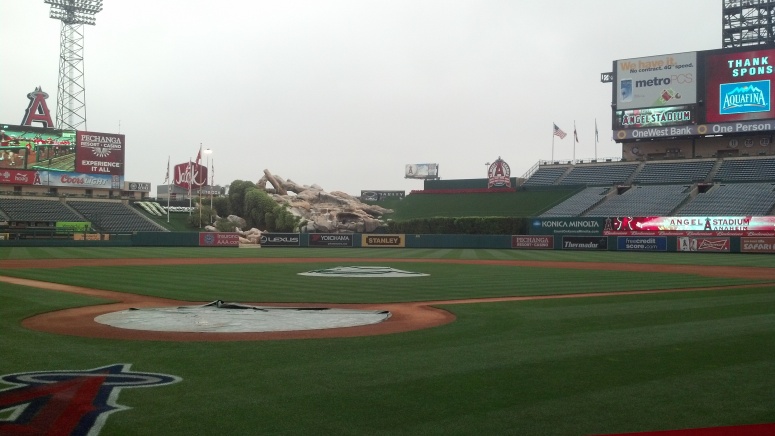 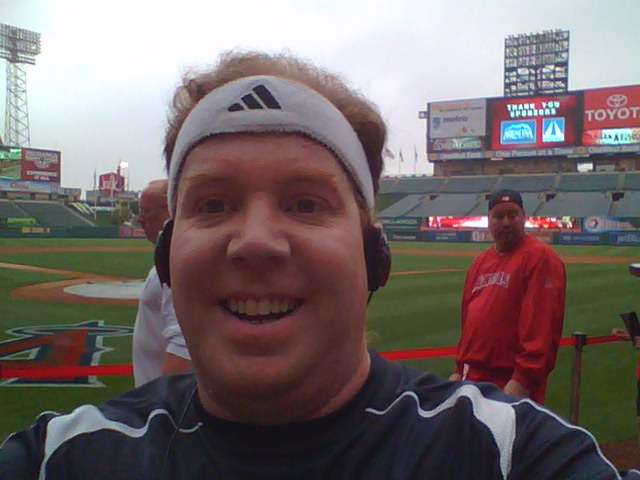 Then, it was time to finish the journey out of the stadium.

Just outside of the stadium was the 3 mile marker. I finished this mile in just over 14 minutes. Clearly, my stopping for pictures hurt my finish time. However, sometimes you’ve just got to have fun. In 2012, I approached the time in the stadium very differently. I was pushing for a faster 5K than the Neverland 5K. I pushed so hard that I was very out of breath when I got to the little ramp that took us out of the stadium and had to stop for a second. That prompted a worker at the stadium to ask if I was okay. I told him that I was and made the final push to the finish, beating my Neverland 5K time by 2 minutes. This year, because of the picture-taking, I had lots of energy as I left the stadium. What a difference a year makes.

From there, it was a short jog to the finish. It felt good to finish another 5K!

I finished in 38 minutes, 31 seconds. It was my slowest solo 5K. However, I’m all too bummed about that because I did get some fun pictures and had a blast in this race. I think Mike Trout would approve.

This 5K did help me gage where I was at in my running base building. Running outside is different from running on a treadmill. Of course, I already knew that. However, this race reinforced that understanding. In addition to that, I need to remember that I’m capable of doing more than I think I can. At the end of the race, I still had a bunch of energy. Part of that was the stopping for picture and the excitement of being on the field at Angels Stadium. However, part of that energy was also due to the way I handled feelings of fatigue on the course. I thought I was more tired than I actually was. So, the challenge for me as I continue training is to work on the mental aspects of running. I’ve been able to run past those initial feelings of tiredness while I’m on the treadmill. I need to do the same while running on the road. That’s the challenge going forward.

My next race will be a 10K at the end of June. Can’t wait to see the progress I will make between now and then!

2 thoughts on “Take Me Out to the Ballgame…or Stadium”