On March 10, 2013, I was out on another race. My wife and I took on the Coaster 5K Run at Knott’s Berry Farm. This was the third theme park I’ve run through. I love running through theme parks! It’s so much fun to be there without anyone else in the park. This time, we were joined by our friends, the Hunts (whose little boy ran in the Kids 1K race).  When I signed up for this race, I didn’t know that it would be the morning after turning our clocks forward one hour. So, waking up at o dark thirty in the morning was even harder than usual.

We made it to the parking lot with plenty of time to spare. It was freezing cold outside. Now, I’m a Southern Californian born and raised. So, freezing is a relative term. 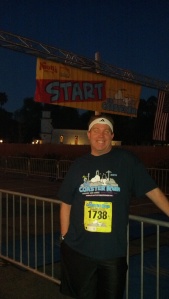 There wasn’t much to do before the race. I think most of the vendors were really there for after the race. So, we just kind of walked around beforehand to keep warm. Eventually, they did make an announcement about finding which wave you’d be starting in. Brooke and I were in the 6th wave and our friends were in the first wave. One thing that made me laugh was when the announcers told us that the wave assignments were due to expected finish time. I don’t remember giving that information when I registered. Oh well. So, we had to part ways with our friends and found our wave.

Of course, we did have to take some pictures.

Then, it was time to get ready to start.

One thing that annoyed me a little was that the race started late. When it’s freezing cold outside, I just wanted to get moving. So, standing still for longer than we needed to was NOT cool. Fortunately, there was only 2 minutes between the start for each wave of runners. Even though we did have to wait longer than we should have, we did eventually get going.

It was so cold that, at the start, it felt like my feet were ice bricks. I would warm up. However, I’ve never experienced cold like this on a run. We made our way through the parking lot and under Beach Blvd to take us to the front of Knott’s Berry Farm. 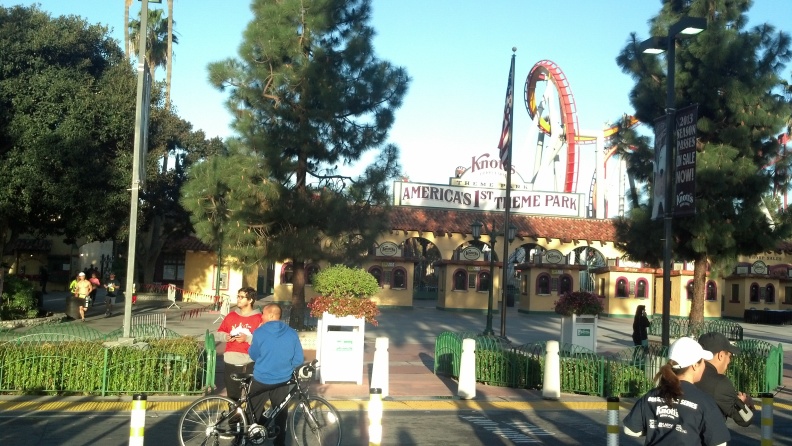 Mile 1 went by quick enough. Even with a quick potty break, we finished the first mile in 15 minutes 32 seconds. This was pretty similar to what my wife and I did at the Neverland 5K. I was in this race to run with my wife. So, she set the pace and I followed and encourage her to keep going.

Mile 2 was our fastest mile. We finished in 11 minutes, 32 seconds. This mile was almost exclusively spent winding up and down, in and out, through Knott’s Berry Farm. Since I hadn’t been in this theme park in well over a decade, it was cool to see how it has changed over the years.  Here are a few of the pictures I took in the park. 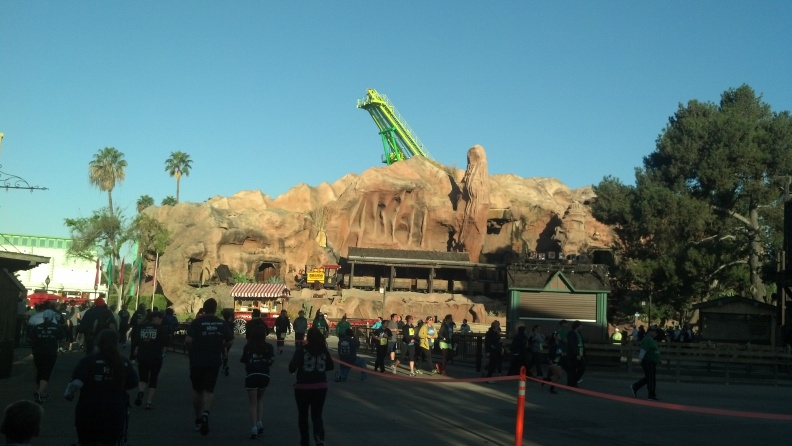 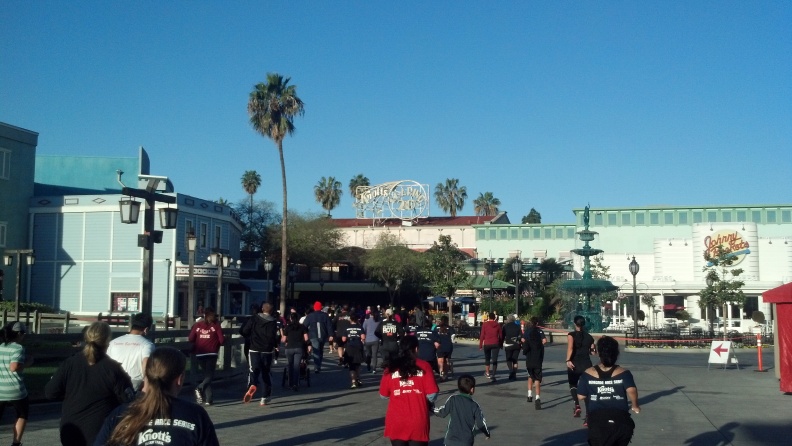 The mile 2 marker was just outside the park and we headed to this roller coaster.

Once we reached that marker, I got a text from one of my wife’s sisters encouraging us to keep going. Well, that perked my wife up and we picked up the pace for a bit. However, during this mile, the sun was having a negative effect on my wife. So, when we were in the sun, we’d walk. Once we got to shade, we’d run. That’s how the rest of the run would go.

Then, it was off for a brief run through Soak City. 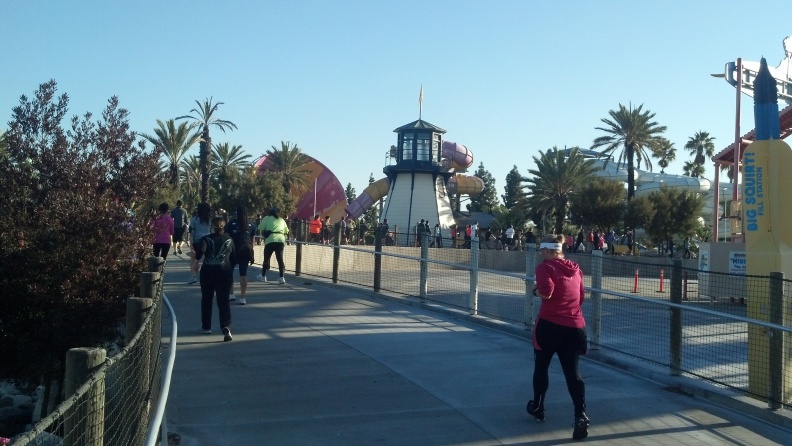 Since it wasn’t summer, the water had been drained. I’m sure this is a cooler theme park in the summer.

Once we left Soak City, we came to the 3 mile marker. The third mile was finished in 13 minutes, 25 seconds. The oddest thing about this race was the finish for the 5K. We turned the corner after leaving Soak City and the finish line was right there. It felt like we took a few steps and we were at the finish. So, there was no time to get excited about seeing the finish line like I’ve always experienced. It was just there. Weird. I wish I had a picture of the finish. However, it just came so quickly that I wasn’t prepared. We finished the 5K in 41 minutes, 40 seconds. I am really proud of my wife because we finished around 5 minutes quicker than we did in the Neverland 5K. 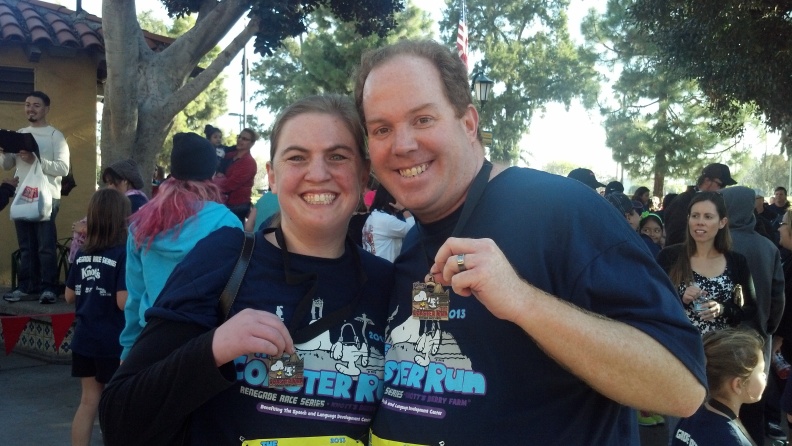 After the race, they gave us water and boysenberry pie. While the pie was good, it wasn’t a great post race kind of food. Added to that, we never caught our friends. So, we tried to find them. By the time they texted back, we found they were getting ready for the 1K kids race. So, Brooke and I made our way back to the entrance to Knott’s to watch the start. Turns out, the kids race wasn’t very organized. So, we just got in with the other parents and followed our friend’s kid as he raced through the theme park. It was incredibly crowded at the start.

However, once he got in the park, Eli was off and running. There is nothing more fun than watching a 3 year old giving his all running. He would high five all the workers on the side of the race route. Boy was he fast. I chased after him with his dad and our wives held back. I was very impressed that this kid made it about 75% of the race before he needed to take a break. So, we waited for the grandparents and our wives to catch up. The little one hopped in a stroller and we walked for a little bit. Once we got close to the finish, the little 3 year old was ready to run to the finish.

Here we all are at the finish.

After the races, we got to play in Knott’s Berry Farm.

It was a fun day of running with friends and hanging out Knott’s Berry Farm!

4 Replies to “Other Theme Parks have 5K Races Too”